When I received an invitation for my wife and I to attend the 15th Beijing Art Expo 2012, I felt a thrill of pleasurable anticipation. The invitation announced that the exhibition would cover 10,000 square metres, with art works from more than 80 galleries and art agencies, from 16 countries and areas. But yesterday afternoon, when we entered the exhibition my heart sank. I recognized that we had visited the exhibition two years ago and had been underwhelmed by what we saw. I feared the same again.

Unfortunately, I was right. The art being shown was either pretentious crap or sucrose. I gritted my teeth and systematically worked my way from booth to booth. Hope springs eternal. But there was absolutely nothing worth looking at. So depressing …

And then I came across two booths which were exhibiting Russian art. This is not actually the first time I’ve come across Russian art being exhibited in Beijing. I find this art quite refreshing. For the most part the paintings are quiet, reflective views of rural life, with vistas of fields, village buildings, and farming folk just doing what they need to do. There are also some townscapes and seascapes. They remind me very much of the early pictures the impressionist painted in the 1860s and early 1870s, before they began to use a brighter palette. 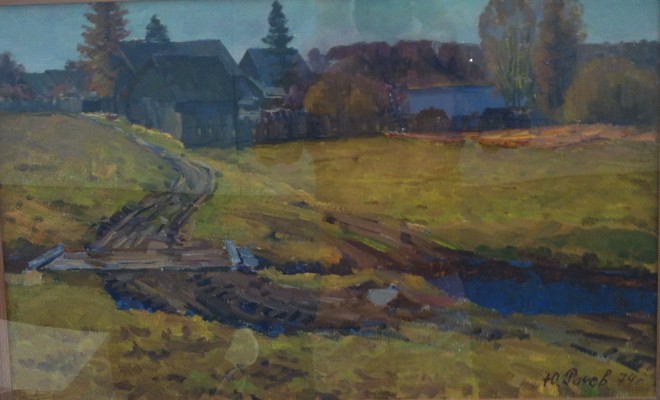 The intriguing thing is that much of this art was painted in the 1960s, ‘70s and ‘80s, so when the Soviet Union still existed and so when art was closely controlled. Were these officially endorsed artists? But it doesn’t seem very “communist” art. Were they then “alternative artists”? I have to follow up on this. Watch this space.