Well, we’ve finally moved to Bangkok. We’ve found ourselves a place on the Chao Phraya river, literally overlooking it. The open water gives rise to constant breeze which we can channel through the apartment by a judicious opening of various windows, obviating the need for air-conditioning – a minor miracle in this heavily air-conditioned city. When, as now, the evening’s storm clouds come rolling in, that breeze will rise to a stiff sou’-wester’ threatening to blow every light object into the river below and sends us scurrying around the apartment closing windows and doors. At these moments, I find myself back on my grandmother’s sailing boat, with her at the tiller imperiously ordering me and any other grandchild around to lash down everything movable as the summer storm rips over us and the boat starts to lean over at a precipitous angle.

During the day, that same breeze wafts into our living room all the noises of the river and its banks: the deep grumble of the tug boats slowly pulling the heavily laden barges upriver, the growl of the water-buses as they tack back and forth across the river from stop to stop, the creaking and groaning from the landing piers lining the bank as the wash of passing ships sends their platforms oscillating, the slightly atonal call to prayer from a mosque somewhere on the far bank, the more profane call to evening aerobics in a small park just downriver, the occasional siren from a police car racing over one of the nearby bridges, and just the ordinary household noises rising out of the houses below our balcony.

But for me, two sounds stand out from this medley. One is the piercing whistling used by the water bus conductors to guide the drivers when they berth at stops. I haven’t yet understood the signaling, but somehow the conductor makes the driver understand when to reverse the engine to slow down, then idle it, then start it again to move off from the stop. As I listen and watch, fascinated, I am suddenly back in Hyde Park looking on at a competition of Welsh shepherds using whistling to guide their sheep dogs into driving a flock of sheep from one place to another (I’m not sure the drivers of the water buses would appreciate being compared to sheep dogs).

The other sound is the cry of a bird. It is very distinctive. It starts with a low cry, which is followed in rapid succession by a series of ever higher and more piercing cries, finally reaching a crescendo and dying out. I have asked my Thai staff what the bird is called. They are still wrestling with the Thai name, let alone the English name. In the meantime, I am calling it the Fake Orgasm Bird. It reminds me every time of a night I spent in a cheap hotel in Geneva (cheap for Geneva, expensive for anywhere else), where I was woken up in the early hours by a Lady of the Night who was pleasing her customer by oohing and aahing at the top of her lungs. She sounded exactly like my Bangkok bird.

I have finally identified my mystery bird! It is the Asian koel. For those who might be interested in its call, go to http://www.youtube.com/watch?v=TU3T6jikQqg.

In our dying days in China – we leave for good in a week – it seems appropriate that I should write my last posting from Beijing about that most Chinese of utensils, the chopstick. I have a feeling that chopsticks and the Chinese food they pick up are probably the first contact which most Europeans have with Chinese culture (in the very broadest sense of that term), down at their local Chinese restaurant 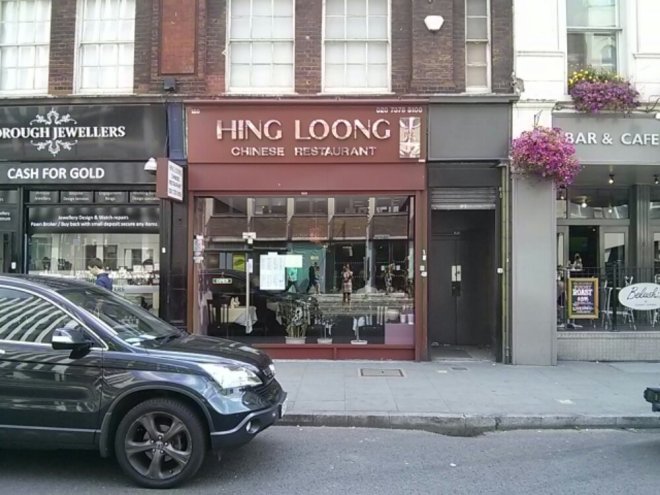 and where in recent years helpful instructions are printed on the paper wrapping around the chopsticks to help us ignoramuses figure this out.

Certainly, I rapidly found out when I arrived here that the Chinese generally didn’t expect me to be able to manipulate chopsticks and always solicitously asked me at the beginning of meals if I wanted a knife and fork. But after years of experimentation in my local Chinese restaurants back home and after hours of carefully studying the instructions on my chopsticks’ paper wrappings, I felt that my chopstick skills were good enough and I would grandly wave away these offers of help. Generally speaking, it’s worked and I have not made too much of a fool of myself, although slippery food still defeats me completely, and I do tend to end up with numerous stains on my trousers.

Although I am a firm believer in the adage “When in Rome do as the Romans”, and will therefore use chopsticks when in Beijing, in my heart of hearts I think forks are so much better than chopsticks. I mean, it seems so much more efficient to spear pieces of food

rather than tweeze them

while also having available the secondary possibility of scooping if needed (for peas, for instance). 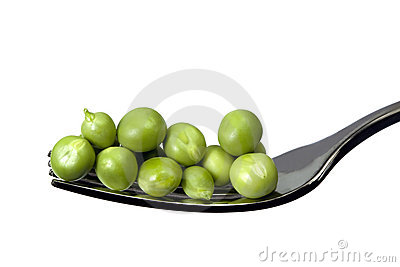 And twinning a fork with a knife means that cooks can turn over the pesky work of cutting up the food to the eaters rather than have to do this work themselves in the kitchen.

But I will admit that chopsticks are aesthetically more pleasing than forks. Or at least they are to me (and here I pull out another venerable adage: “beauty is in the eye of the beholder”). Used to the grotty pieces of balsa-like wood offered to us in Chinese restaurants, it came as something of a shock to my wife and I when we were offered two beautiful sets of chopsticks on our first trip to Japan. They looked something like this.

That was some thirty-odd years ago. They have travelled with us everywhere we’ve gone, like talismans. When we first got to Beijing, we visited Qianmen, which is a pedestrianized road to the south of Tiananmen Square. It’s very touristy, full of shops, generally pretty awful. But there was one shop which drew me like a magnet, a clearly high-end shop which sold chopsticks

I went in and looked around. Beautiful, so beautiful – but hideously expensive. I was staggered by the prices and left empty-handed. I beg to differ with yet another adage, “beauty has no price”.

The shop taught me something I hadn’t known. Chinese chopsticks are blunt 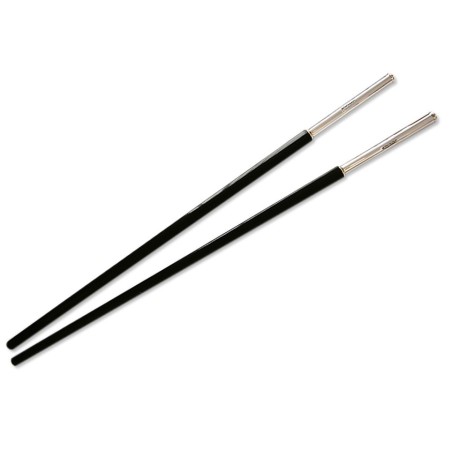 while Japanese chopsticks are pointed

Weighing it all up, I think pointed chopsticks are more pleasant on the eye than blunt ones – and you can spear things if necessary.

I leave you with a beautiful sunburst of chopsticks. Enjoy! 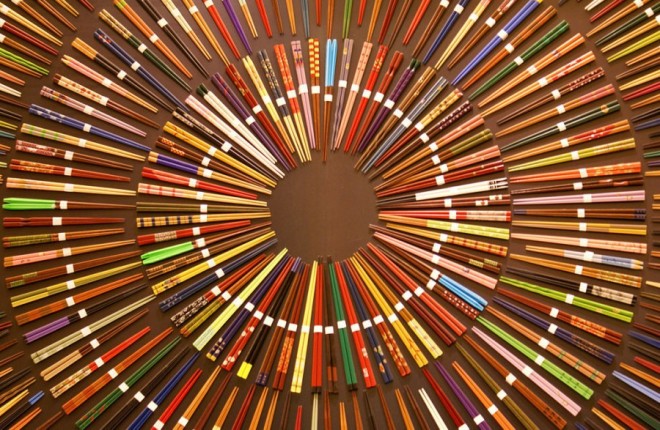