OK, my meeting in Davos was a little more humble than the one that just finished. We didn’t talk of global trends or the next big crisis, nor were television newscasters knocking at our doors begging for an interview. No, we were talking about e-waste and what to do with the growing mountains of broken computers and discarded mobile phones that we generate.

It was still summer, or so I thought. After all, the meeting was taking place in the first week of September. But the morning after I arrived it snowed. I could NOT believe it! My wife and I had made plans that after the meeting she would join me and we would visit the area. But we weren’t about to go visiting in the snow. That was the end of that little holiday.

Perhaps because of this, or perhaps because I realized that the meeting was actually a waste of time, whatever it was, I was not in a receptive mood.  I found Davos to be a pretty nothing place. There was no part of the town that I found worth looking at, no building worth admiring, no vista to stop in front of … nothing. Just a series of anonymous-looking modern buildings along anonymous-looking streets.

Well, to be fair, there was one thing that has stayed with me and that was the train ride up to Davos. At Zurich airport, I took a train to the small town of Landquart, which stands astride the point where river Landquart meets river Rhine, still a modest river at this point on its journey to the sea. There, I changed to a narrow gauge train, which took me up to Davos. This line is part of the Rhaetian railway network (lovely name, that; it comes from the original inhabitants of the high mountain valleys of these parts, the Rhaetians). The train runs up the valley of the river Landquart to Klosters, where it turns off and begins to climb up to Davos, 10 km away and 400 metres higher. It is a truly lovely ride, reminiscent to me of the ride in the Micheline about which I wrote a post recently. Maybe it’s because the train doesn’t go too fast, or maybe it’s the narrower gauge or the single line, or maybe it’s because the trees are allowed to grow up close to the train, or maybe it’s the way the train twists and turns through the very peaceful fields and woods … but somehow in this train you feel so close to nature. 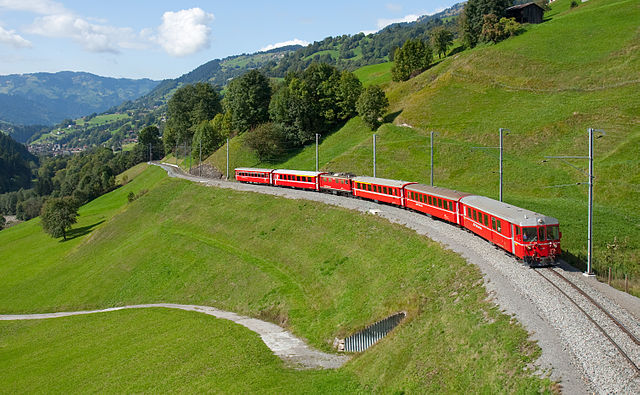 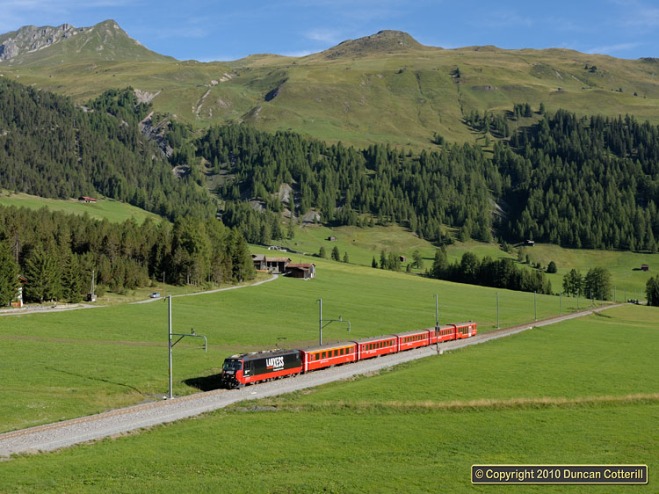 When I took it, I was alone in my compartment, so I pulled down the window (in itself a small miracle in modern trains), stuck my head out of the window, and just let the hayfields and pine trees whoosh past me, all the way to Davos.

Pity Davos and the meeting were such a let-down.