Last week, I was down in Fujian province. Tea connoisseurs will know the province, it being the home of black tea in China (as well as of white tea and oolong) and, as a result, of some of the most famous black tea brands, including the three Fujian Reds: Tanyang Gongfu, Zhenghe Gongfu, and Bailin Gongfu.

I’ve written a previous post about a fourth black tea from Fujian, smoked this one, which was my grandmother’s, and now is my wife’s, favourite tea: Lapsang Souchong.

But I was not in Fujian to explore its tea. I was there to visit two factories. One produces spirulina, a family of blue-green algae, which in the last several decades has received a lot of press as a sort of miracle food for the undernourished, and which was already being eaten by the Aztecs back in the 16th Century when the Spaniards conquered them. I’ve mentioned this wonder product in an earlier post.

The second factory produces glossy ganoderma, a fungus which the Chinese have been consuming for the last two thousand years for its medicinal properties and which has a renewed lease of life as a possible anti-cancer drug.

The two factories were quite distant from each other as well as from the nearest airport at Wuyishan, so our days were long as we drove to each factory, visited them, and of course had long and copious dinners with our hosts and various local worthies such as the mayor or party provincial secretary.  It was with some relief that I saw we had finally arrived back in Wuyishan that last evening of the trip. Alas! I had rejoiced too soon. Wuyishan is an important centre for the tea trade, with scores of tea shops lining the main roads. Our driver, who also happened to be the son of the owner of the spirulina factory, had the great idea of taking us to one of these tea shops. Its owner was a good friend of his, he informed us brightly. He had been so good to us that I didn’t have the heart to say no. So we drew up in front of one of these tea shops, and were greeted effusively by its owner as we got out of the car. He was an Artist, he later informed us, which presumably explained his heartily embracing me; no normal Chinese would ever have done such a thing. It also no doubt explained his pony-tail, something which is now rare in China since the heady days of the birth of the Chinese Republic, when Chinese men everywhere cut off their queues to mark their liberation from Manchu rule.

In any event, he ushered us into his tea house, introduced us to his mother and sister, bid us sit, and quickly made us a cup of tea. 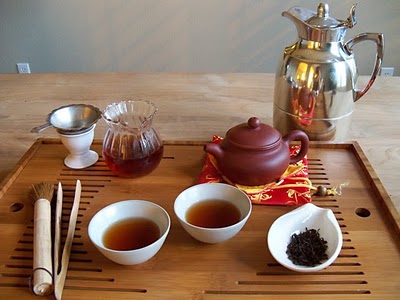 After a few minutes, and perhaps after a quiet word from his friend the factory owner’s son, he invited us to follow him up some back stairs, to a more private den on the second floor. Here, he had us sit around a table whose top was a square slab of rough stone into which he had carved a Chinese character; this in turn acted as a channel for a little fountain which emerged from the middle of the table’s top. The fountain added a quiet sound of running water to the proceedings. Our host announced that he would be serving us a rare black tea made from just a few kilos of leaves picked every year.

He gave us each a little cup which could contain a thimbleful of tea; he had made them himself, he informed us. He then ordered an acolyte who was hovering in the background to pull out his 18th Century Qing cup, which turned out to be even smaller than the ones we had been given and sat on its own tiny wooden table. We all inspected it with great respect. By this time, our host had boiled the water and transferred it to a small cast-iron Chinese teapot. With this, he poured a thin jet of hot water over the cups to warm them, and then added water to the tea. He let it stand for a while, then filled our little cups.

We all sipped our tea – I, out of the Qing cup – and murmurs of appreciation rose up. Now, I don’t pretend to be a tea connoisseur. In fact, I keep it a secret in China that I drink my black tea with milk and sugar. This would put me quite beyond the pale for most Chinese if it ever became common knowledge. And I have never appreciated the green tea which I am routinely offered here. But I actually liked the tea our host had offered us! It did indeed leave a mildly sweet aftertaste, as he had predicted. We drank a few more thimblefuls, after which he declared he would have us try another black tea. This one, he said, was even rarer. Just a kilo or so was collected every year, from one wild tea tree whose location he kept deeply, deeply secret. 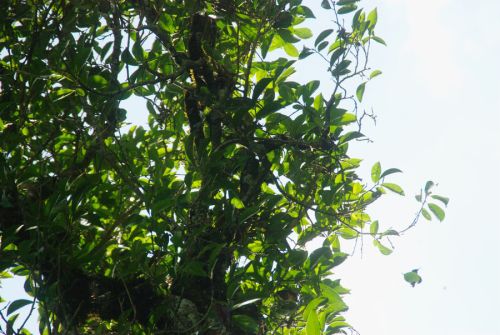 It had to be sort of slurped to appreciate its taste, he instructed us. I duly sort-of slurped the tea and was astonished to discover a mild chocolaty aftertaste. Yes, my host smiled, that’s what many say.

As we continued to drink the tea, our eyes started to wander around the room, taking in the various ceramic pieces placed on the shelves around us. Our host began to take them down to let us inspect them. This small cup was Song, he said – Song! Oh  –– My –– God! I love Song ceramics!

– while this one was early Ming, he continued, and that shallow bowl was Qing. My head whirled. And as we sat there, sipping our tea and holding the ceramic pieces gingerly, oh! so gingerly, I felt for a moment – an instant – like a Chinese scholar of yore, sitting in my study, sipping my favourite tea, gently turning my ceramic pieces in the light, murmuring that Tang love poem I loved so much – and wondering if I would ever pass the next level of those damned imperial examinations … 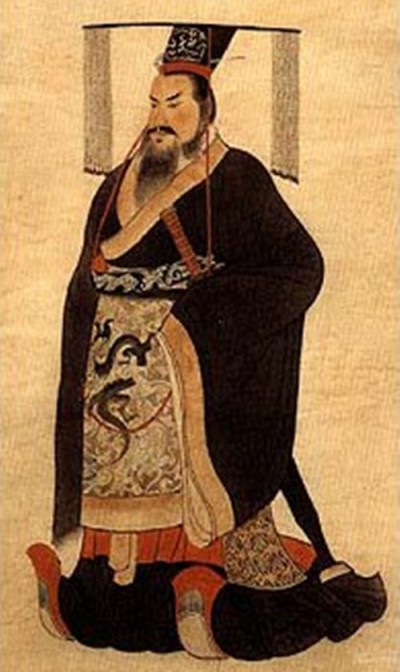 One thought on “FUJIAN TEA”