I think it must be a universal characteristic of human beings to want to remember their dead. Perhaps it’s part of a refusal, deep down in our psyche, to accept that we die, so remembering the dead is a way to declare defiantly that we too, when we will be among the dead, will not really be dead. Whatever it is, and I’m certainly not competent to explore this side of our collective consciousness, we do have ritual days in our calendars when we are called upon to remember our dearly departed. For us in Western Europe, it’s All Souls’ Day, November 2nd.

For those following the Christian Orthodox tradition, it’s the Saturday of Souls, commemorated some time in Spring

For the Chinese, it’s the Qingming Festival, or tomb sweeping day. It falls on the 15th day following the Spring equinox, which this year turned out to be yesterday. The pious Beijingers flocked to the tombs of their loved ones, while the rest of us, who don’t have any tombs to sweep in the immediate vicinity, took the day off. My wife and I fall into the latter category, our parents and grandparents lying in peace (I hope) in Italy, France and the UK. Nevertheless, we thought it would be interesting to observe this Chinese festival at first-hand. So we visited a cemetery in the farther reaches of the city, arriving there after a long journey by bus and under the curious stares of the locals.

The cemetery was indeed full of people

and it was fascinating to watch what they did. They burned incense

As well as leaving normal flowers, they garlanded the graves with paper flowers (I suppose cheaper than real flowers, and certainly a good deal more colourful)

They left food on the graves

They left money (fake, alas, as we determined after surreptitiously picking up a few notes under the suspicious gaze of one of the gardeners)

They paid their respects

And even in one case we heard an old woman talking to her husband (I presume), I suppose updating him on what had been happening since she had last visited. The loneliness of old age can indeed be hard …

Well, the flowers we could relate to. After all, we do that in Europe too on All Souls Day – although the garlands of fake flowers was new to us. 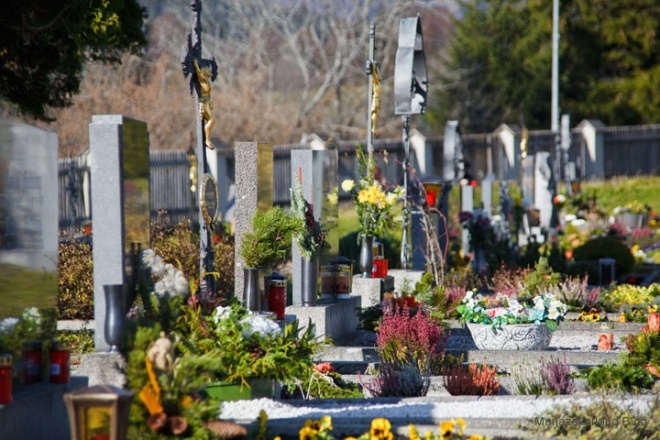 We could also sort of understand the incense – I remember piles of incense being burned in the churches of my youth, although I never saw it used on tombs.

But the food and the money we found really strange. Especially the food. There was something almost animistic about this. It was like the ancient Egyptians who buried their dead with food for the afterlife.

Mind you, it’s not as if we don’t have our own strange cemetery habits. For instance, what I missed were the little candles which we leave on our graves in Europe 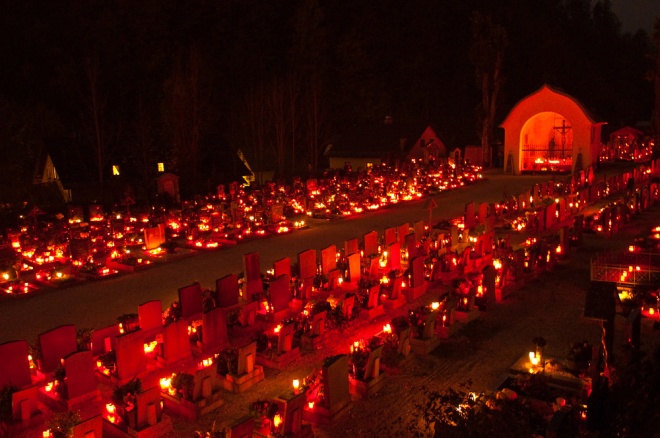 But if a Chinese were to ask me what those candles signify I would have to confess to not knowing. To keep away the bad spirits? To help God remember that they are there? To light up the darkness in which they lie?

Something else I missed was the statuary. The tombs we saw were very sober affairs.

Compare this to the almost baroque constructions I’m familiar with, especially in Italy. Here are a few examples from the cemetery where my wife’s parents are buried

From the style of these examples you might think that this was a habit of the past, but one of the tombs near my father-in-law’s has a life-size statue of a fisherman standing on it.

I presume the tomb’s incumbent loved fishing. Another close by, sadder to contemplate, is the statue of the young man buried there, whose life was tragically cut short. 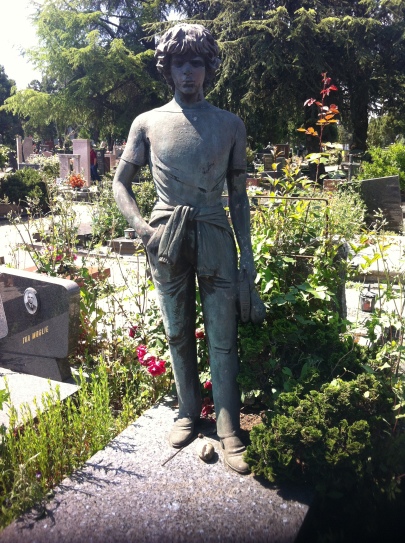 My father-in-law’s tomb itself has a beautiful statuary group of angels singing in the heavenly choir.

We are going back to Milan in a few weeks to recuperate it after cremating his remains. My father-in-law has had thirty-five years of peaceful repose and now it is the turn of someone else to lie there: the iron law of increasing populations and decreasing real estate in which to rest the dead. But we’ll have the singing angels by which to remember him – and my mother-in-law, who chose the statuary’s theme. They had a common love of music. We will try to have his ashes relocated next to hers, so that after a separation of thirty-five years they can be together in death as they had been in life.

I wish I could say the same for my parents. Deaths ten years apart and the same real-estate forces which I just alluded to has meant that, after a life together, they were buried in different places. It fills me with melancholy and makes me think of Thomas Hardy’s poem In Death Divided

I shall rot here, with those whom in their day
You never knew,
And alien ones who, ere they chilled to clay,
Met not my view,
Will in your distant grave-place ever neighbour you.

No shade of pinnacle or tree or tower,
While earth endures,
Will fall on my mound and within the hour
Steal on to yours;
One robin never haunt our two green covertures.

Some organ may resound on Sunday noons
By where you lie,
Some other thrill the panes with other tunes
Where moulder I;
No selfsame chords compose our common lullaby.

The simply-cut memorial at my head
Perhaps may take
A Gothic form, and that above your bed
Be Greek in make;
No linking symbol show thereon for our tale’s sake.

And in the monotonous moils of strained, hard-run Humanity,
The eternal tie which binds us twain in one
No eye will see
Stretching across the miles that sever you from me.

I hope that, one day, I can bring them together so that finally one robin can haunt their two green covertures.