Suddenly, there are vendors on every street corner of Beijing hawking pomegranate juice.

As certainly as the appearance of vendors selling pineapples on Beijing’s streets is a signal that Spring is coming, so this new apparition is a sign that Summer is drawing to a close, with the pomegranate trees now heavy with fruit.

My wife and I have bought our cup of pomegranate juice. Peering down into that dark red liquid

I have as usual begun to ask myself questions about this fruit. It’s not from my basket of inherited foods. I never remember eating it as a child. Which is not surprising, really. It doesn’t grow well in the UK or France – certainly, my French grandmother had no pomegranate trees in her garden; peaches, plums, apples and pears, but no pomegranates. I have never eaten them in Italy either, even though they were brought to Italy during Roman times; their cultivation is limited to the far south.

That’s the thing, pomegranates are not a European fruit. I thought for a moment – given my previous discoveries – that they originated in China. But actually their historical tap root is sunk in Persia (today’s Iran), and the Himalayan foothills of the Indian subcontinent.

It’s been cultivated as a fruit for an awfully long time; they say it’s probably one of the very first fruits which we humans cultivated. And it caught on, being carried enthusiastically along the ancient trade routes. It was already being eaten in Jericho in 3,000 BC or thereabouts and in Cyprus some while later (in both cases, archaeologists found remains of the fruit in the cities’ ancient garbage dumps).

From the Middle East, it was but a hop, skip and a jump to bring the pomegranate to Greece in one direction and to Egypt in the other. This piece of fresco from a tomb painting in Egypt shows the delights of a private garden, with a pomegranate tree tucked away in one corner, no doubt a prelude of the delights which awaited Nebamun, the owner of this particular tomb, in the after-life.

Meanwhile, from their base in Lebanon, the Phoenicians carried the fruit to their overseas territories, notably Carthage. And it was from Carthage that the pomegranate arrived in Rome. Everything comes full circle in this picture, where a mosaic in the Roman style, laid down in the city of Caesarea in Rome’s near eastern province of Judaea (in what is now Israel)

depicts among other delights a pomegranate tree. 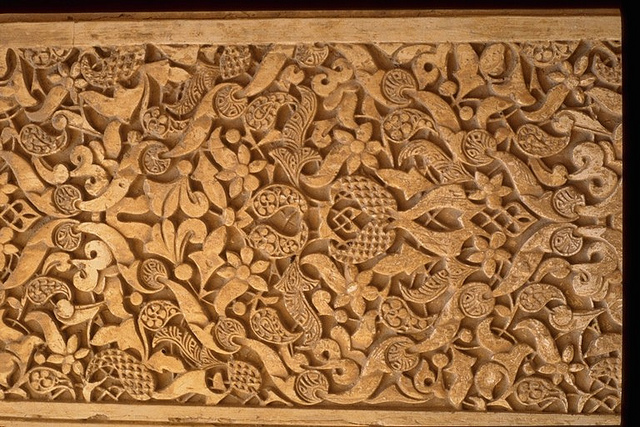 To be found in the palace’s Golden chamber.

Perhaps it comes as no surprise to know that Spain is now Europe’s biggest producer of pomegranates.

Meanwhile, the pomegranate also travelled east from Persia, along the fabled Silk Road, through Central Asia and finally entered China through Xinjian. But after becoming one of the three blessed fruits of Buddhism, it also tumbled off the Himalayas and travelled into the heart of India, and probably from there it sailed, via the Maritime Silk Route, to south China and Southeast Asia. And from China it was but another hop, skip, and a jump for the pomegranate to be carried to Japan and Korea, where in truth it was appreciated more as a good candidate for bonsai-ism than for its fruit.

In passing, we should acknowledge that the pomegranate tree does have beautiful flowers

another reason that the ancients loved the tree, as evidenced by this other wall painting from Egypt

To be honest, I’m not sure I understand what all the enthusiasm is about. I mean, the juice is OK, but what I really like about a fruit is to sink my teeth into it. And all those seeds in the pomegranate

make that an unpleasant experience – bits of seeds getting stuck in my teeth, a sort of gritty munching experience, that sort of thing … I know the seeds are edible, but psychologically I’m not ready to crunch my way through a whole bunch of seeds. I’ll pick up a peach instead, thank you.

In my opinion, though, it’s precisely those seeds that made it so popular in the old days and encouraged its dissemination out of its Persian-Himalayan homeland. Not, I should clarify, because people liked to crunch their way through a pile of seeds 5,000 years ago (although maybe they did), but because those seeds were a potent symbol of fertility to those eaters. Remember one of the cardinal principles of sympathetic magic, which was potent then: if I eat something (or spread it on my skin, or wear it), I will absorb its powers. Clearly, all those seeds meant that the pomegranate was suffused with fertility. So it would be good to eat it, for instance, if I wanted to have lots of children. This old, old idea has been continued as a quaint custom played out in Greek and Armenian weddings 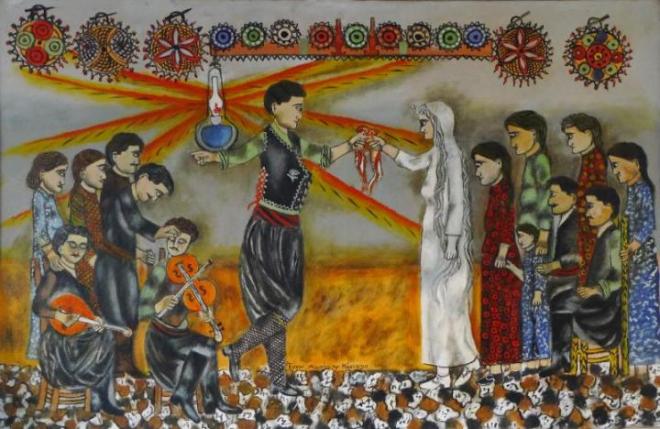 where at some point the bride breaks open a pomegranate and the seeds spill out (I’m sure I do not need to explain the symbolism of this). But this wish for fertility can be more generalized, and in this guise the pomegranate tree has been cast in the role of Tree of Life. Here, for instance, on this ancient Assyrian seal we see priests standing before a pomegranate as the tree of life, with the sun – another symbol of life – gently beaming down 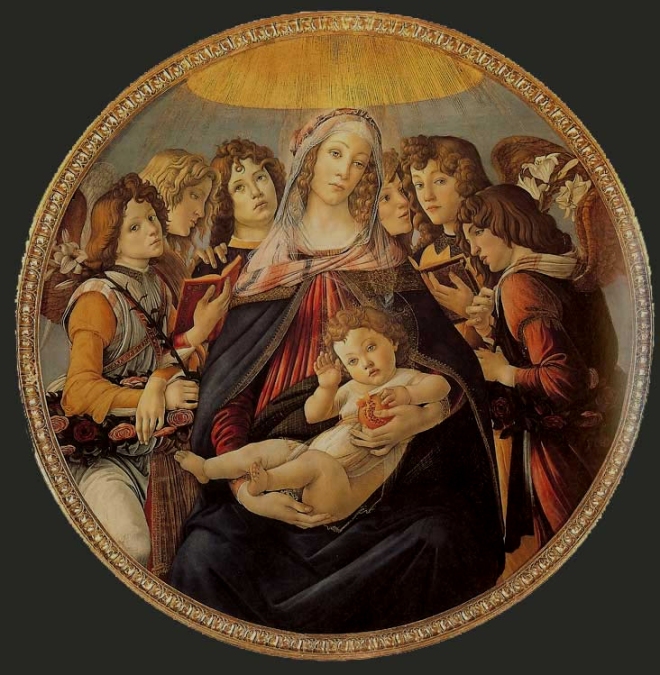 Botticelli is telling us that both the Madonna and her child know of the suffering to come, but the pomegranate tells us that it will not have been in vain.

All of this doesn’t change the fact that pomegranates have too many seeds in them to make them a nice eat.

5 thoughts on “THEY HAVE TOO MANY SEEDS”