There was a habit in China that I always found strange – dissonant perhaps is the better word – and that was the locals’ enthusiastic adoption of typical Christmas decorations. One would enter any self-respecting mall at the end of the year and there, standing proudly in the foyer, would be a resplendent Christmas tree. 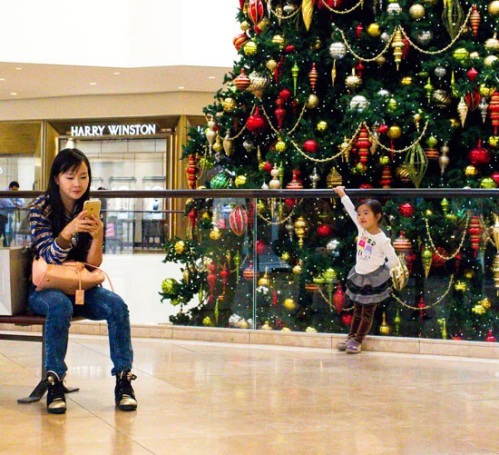 A tree was sort of OK. Pine trees grow in China, right? and one could imagine the Chinese covering them with colorful baubles. I could even live with the muzaked Christmas carols that invariably were being played in the malls. Seeing Father Christmases in China, though, that was really strange to me.

I mean, Santa Claus has his roots deep in Northern Europe, in some place like this

and not in the arid plains of northern China.

Luckily, I never saw any Santa elves while in China. That would really have been too much, I would have had to take to my bed.

My Chinese office staff always got enthusiastically into the swing of things in the first weeks of December, sprinkling the walls and other surfaces with Christmas decorations.

I tolerated all this Yuletide good cheer à la chinoise, although the first year I found it somewhat disconcerting that one of the secretaries kept her decorations up around her workspace way after Christmas: a cheerful Santa ho-hoing away and a couple of reindeer-drawn sleighs as I recall.

In July, I finally got around to asking her why she kept them up. They were cheerful, she replied. OK, why not? My role in running the office did not extend to policing the interior decorations, so long as they didn’t offend public morals.

Luckily, now that we no longer live in China I don’t get this weird feeling of something not quite right around Christmas time. In fact, this year, in Brooklyn, I get the feeling that everything is absolutely right. In this part of Brooklyn (Carroll Gardens), many of the brownstones have small gardens in front of them. Their owners have enthusiastically filled them with various Christmas-themed stuff, many of them lit up at night. The result is a very pleasant walk for me and my wife from the subway stop down to our daughter’s apartment. I throw in here a gallery of the community’s efforts in Christmas son et lumière (actually lumière only; there was no son except for the wind rattling the branches of the trees above our heads).

Here we have a bare-bones offering, although the lights do give off a cheerful glow. 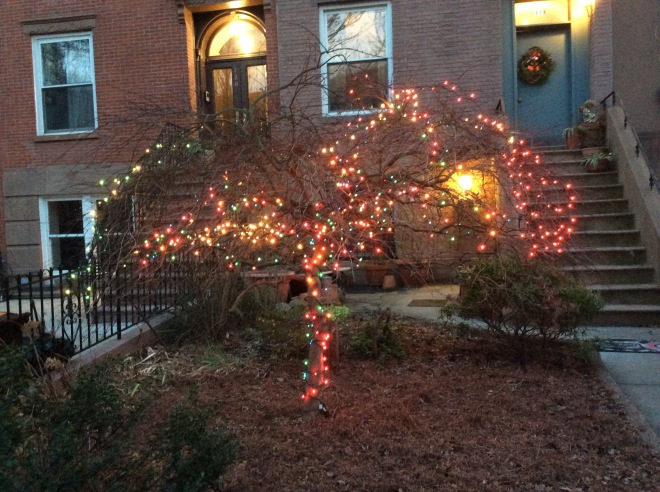 In these next few photos, the owners have created somewhat more complex tableaux 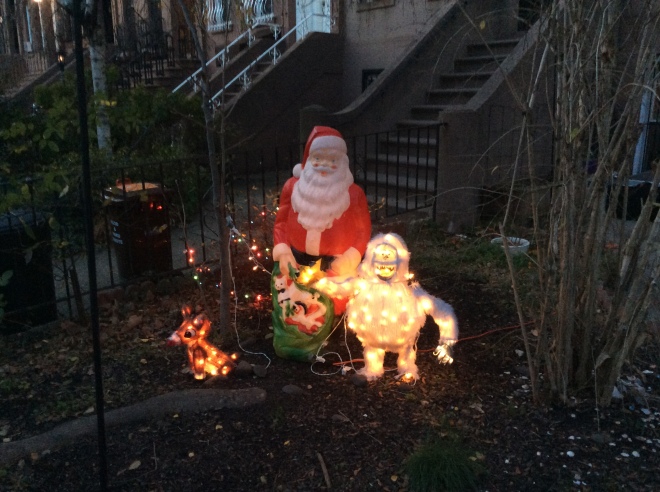 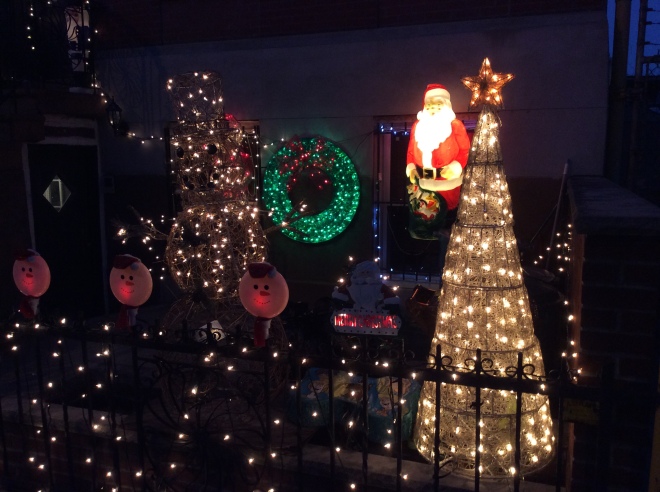 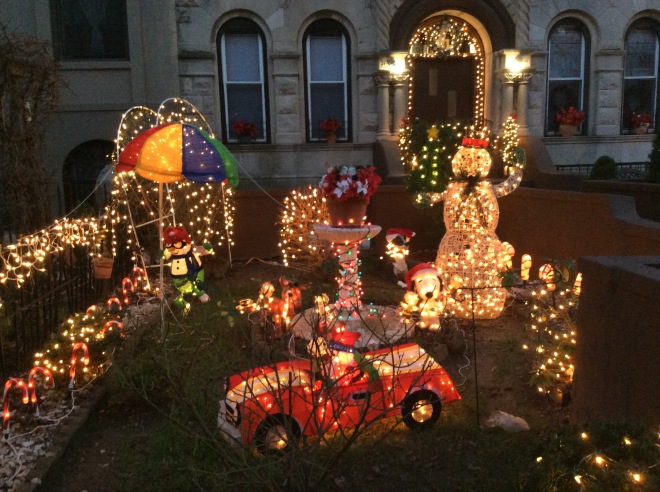 All these efforts culminate in a wonderful series of tableaux where compressed air (I guess) has been used to create large and exceedingly cheerful balloon-like sculptures, which wave gently with every passing breeze. 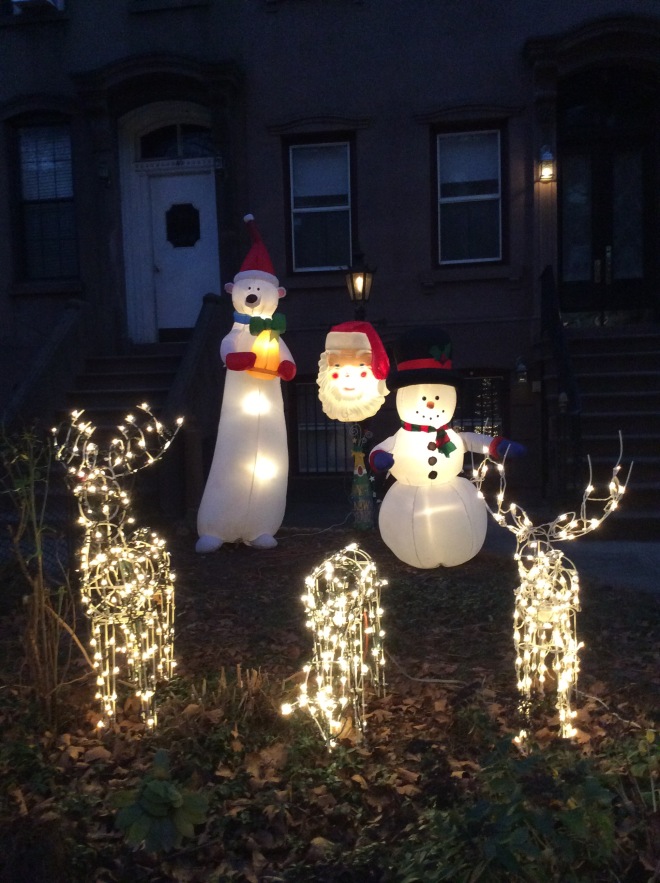 But a whip around the web shows that all these efforts are nothing compared to what some people have done. Here, for instance, is an unutterably cool house somewhere in Queens.

The owners should get a medal for their efforts.

All things considered, my feelings of discomfort about seeing such cheery Christmas scenes in China are silly. In this highly globalized world of ours, where we all dress the same, eat the same, buy the same furniture and furnishings, see the same movies, and play the same videogames, where’s the harm in the Chinese decorating their apartments, houses, offices, and malls with Christmas paraphernalia? Especially since it’s all made in China. 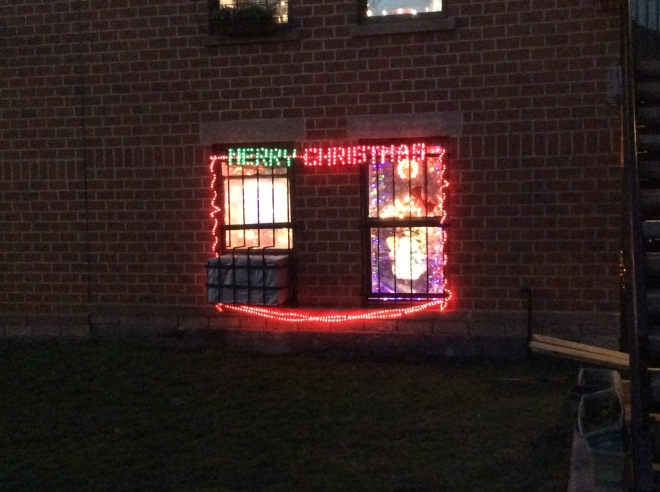 One thought on “CHRISTMAS CHEER”