I said in my last post that beauty is in the eye of the beholder. In that case, I was talking about citrons. But this homey dictum is that much truer about the subject of this post, betel chewing. To explain what I mean, consider this picture of a betel chewer. 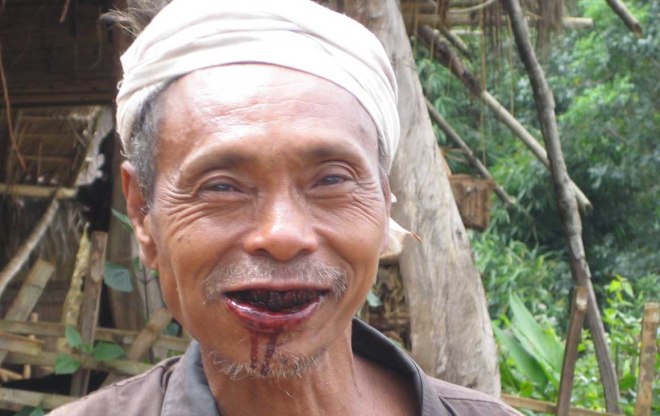 Now, if I were to meet such a fellow, I would be nervously looking for an escape route, half expecting the man to make a lunge with his pointed canines at my jugular. But in the village where he comes from, where no doubt half the population have red goo drooling from their lips, this man would be seen as a nice, friendly village elder. Perhaps a little less on the extreme side of things, if I were to meet this smiling Indian gentleman 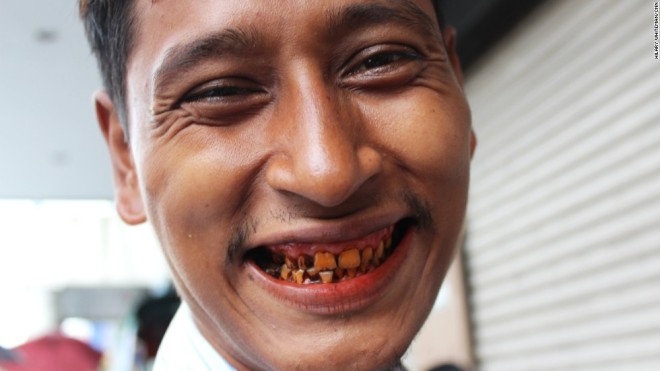 my earlier post on teeth would come to mind and I would make a mental note that he badly needed to see a dentist rather than thinking what a lovely smile he had and what a nice man he must be. As I said, beauty is in the eye of the beholder.

I first came across the habit of betel chewing in Delhi. I was there for a meeting of some sort, and after it was over and I was being walked back to my hotel my colleague stopped at a betel stand such as this one 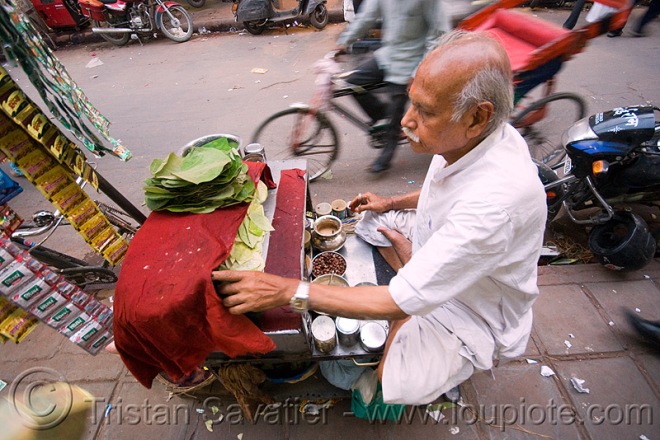 and ordered himself a betel quid to chew. He asked me if I wished to try one, but I politely declined. I watched with curiosity to see what might happen to him, but nothing untoward did. I did realize, though, that this habit explained his somewhat orange teeth.

I was reminded of this scene from long ago when I was in Myanmar recently and saw the tell-tale signs of betel chewing all around me in Yangon – the orange teeth, the betel stands, and – most revolting of all – these bright red splotches on the pavements. 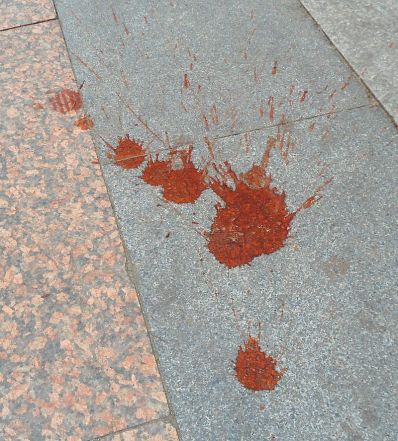 Betel chewing generates a lot of saliva, which the chewers either swallow or spit out (which if not done vigorously enough no doubt leads to dribbles on the chin as in the case of the old gentleman with whom we started this post). The fact that these are spit is revolting enough, but their bright red colour further gives the impression that half the population have advanced cases of TB and are coughing their lungs out (my childhood memories have retained stories of older generations with consumption coughing hard into their handkerchiefs and seeing with horror that the handkerchiefs were stained by bright red blood from their lungs; the end was nigh for them).

For those – I hope – many readers who have no idea what is in a betel quid, allow me to elucidate. At its most basic, the betel consists of slices of the “nut” (actually fruit) of the Areca palm 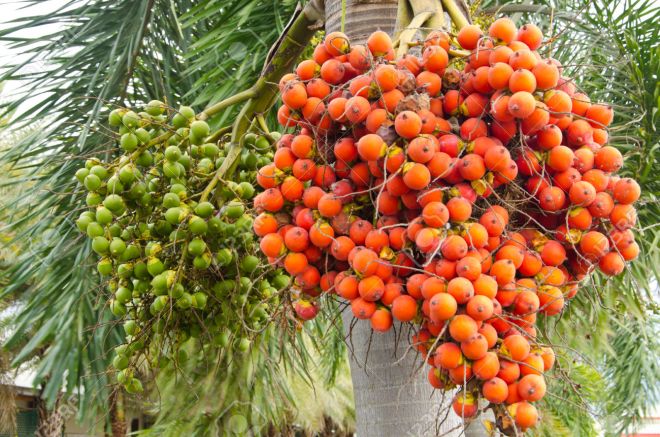 wrapped in leaves of the betel vine 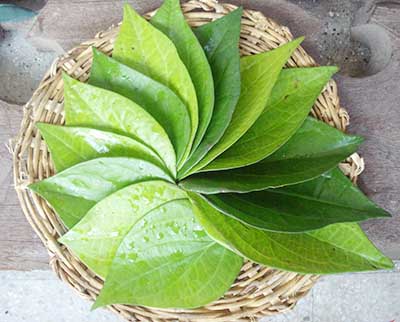 which have been liberally smeared beforehand with slaked lime. Depending on your fancy and which part of the world you come from, your local betel stand holder can add tobacco, spices, and various other ingredients – note the various little pots which our betel stand holder in the picture above has spread out before him.

Since I had first come across the betel chewing habit in India, and since every betel stand holder in Yangon seemed to be of Indian extraction, I sort of assumed that this was an Indian tradition which had been exported elsewhere. Not a bit of it! It’s actually the other way around. Although it’s not yet clear where the Areca palm and the betel vine originated from exactly, there is general agreement that it was in South-East Asia somewhere. But they didn’t originate in the same place. Evidence points to the betel vine and Areca nut being initially consumed separately, their use spreading out from their point of origin until they overlapped, at which point some bright spark had the idea of putting the two together. Early trade between South-East Asia and India brought betel chewing and then the plants to the subcontinent – and migration brought them out to New Guinea and the Pacific Islands, where the dreaded signs of betel chewing are to be found. 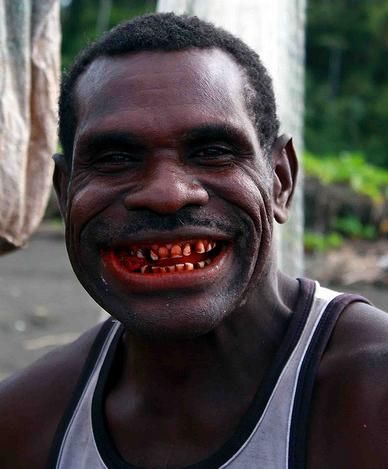 But why, some readers may be asking themselves, does anyone bother to chew betel quids in the first place? Because both plants contain mild stimulants: arecoline in the case of the Areca nut, eugenol in the case of the betel leaf. So chewing the quid gives the chewer a mild high. It joins a number of other plants which are chewed for their stimulating (in some cases very stimulating) effects: coca leaves in the Andes, 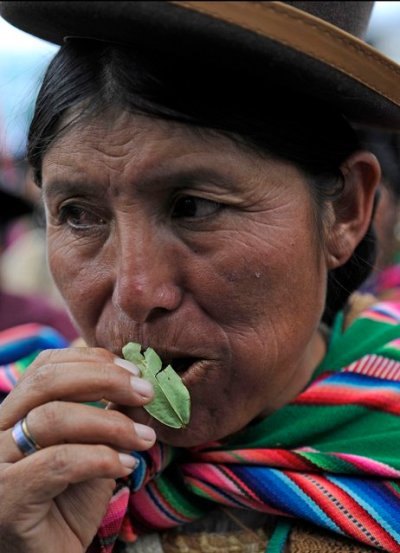 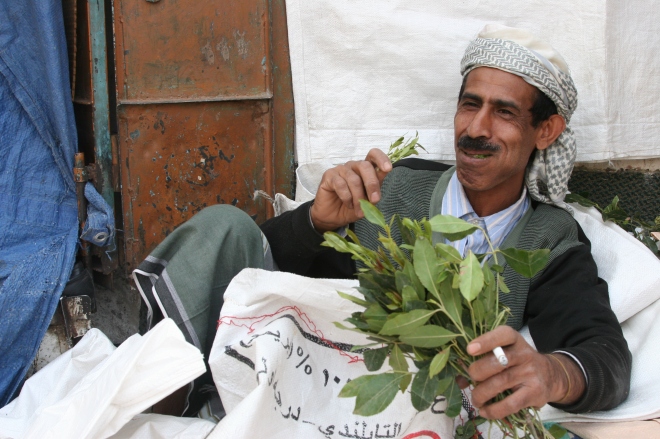 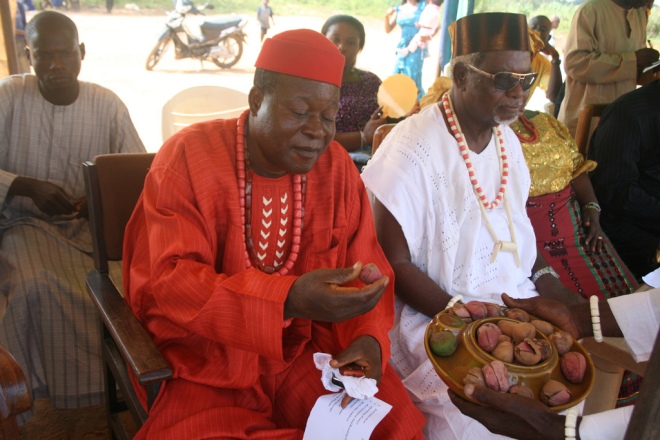 And then there are the plants that are smoked, those that are swallowed, those that are made into infusions and drunk … Early humans were exceedingly resourceful in figuring out how to get a high from the plants which surrounded them. I wonder, though, how they ever figured out which of the thousands of plants around them gave them highs.

Luckily, the practice of betel chewing seems to be dying out. For instance, Thailand was once a hot-spot of betel chewing, but I have never seen anyone in Bangkok, or anywhere else for that matter, chewing it. Nor have I ever seen anyone chewing betel quids in Cambodia or Laos. I say “luckily”, even though this perhaps betrays a cultural imperialism. I mean, one could argue that if people want to chew betel why shouldn’t they, as long as they don’t kill me or their family or themselves in the process, and don’t become a burden on the public purse because of it. Normally, I would indeed be tolerant of cultural diversity, but for this particular practice I draw the line: people with red mouths and teeth à la Dracula generating bright red spit marks all over pavements are beyond the civilized pale. This should be the new normal, everywhere. 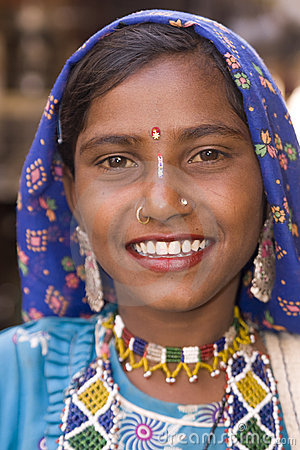