One of the first things which struck me as my wife and I started our tour of the Kimberley in Australia was the presence of this tree, which we frequently saw, both in leaf

and many of them with fruit.

I kept saying, “Aren’t those baobab trees?” For they looked amazingly like African baobabs. 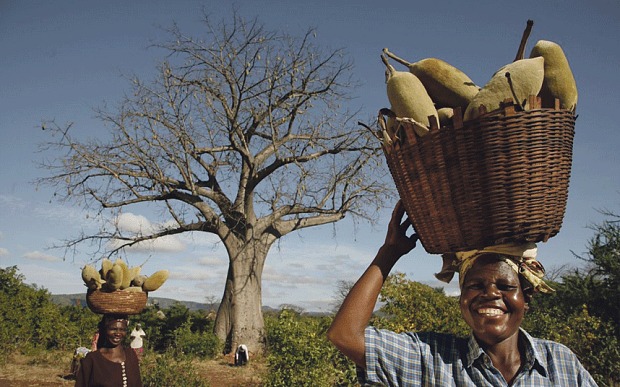 Well, the fact is, they are baobabs (although Australians insist on calling them boabs). These trees are to be found in sub-Saharan Africa (two species) as well as in Madagascar (six species, of which these, subjects of a previous post of mine, are magnificent specimens) 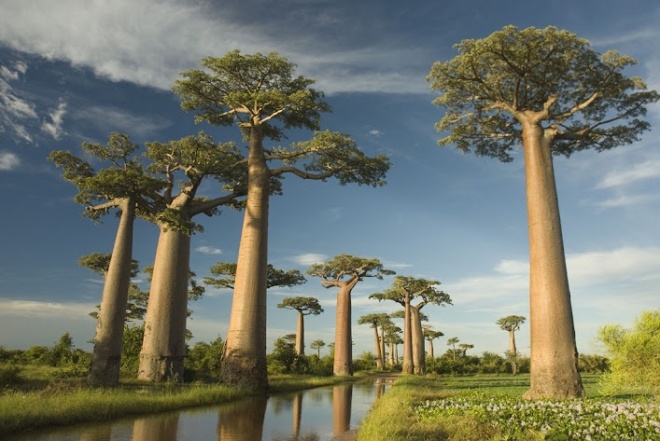 and there is this one species in Australia – actually, the tree is found only in the Kimberley and nowhere else in Australia.

How did the baobab tree end up in the Kimberley? I mean, it’s quite some distance, some 8,000 km to be precise, between the east coast of Africa and the west coast of Australia.

A first hypothesis was that this was a left-over from the break-up hundreds of millions of years ago of the supercontinent Gondwana into its constituent pieces of South America, Africa and Madagascar, Antarctica, India, and Australia

which then proceeded, through continental drift, to arrive where they are now. The ancestors of the baobab had existed on Gondwana, so the thinking went, and were carried along for the ride on the drifting continents.

Apart from the fact that this hypothesis doesn’t explain why there aren’t baobabs in India or South America, modern DNA analysis has nixed it. Comparison of DNAs has shown that the African and Australian varieties of the baobab separated a “mere” 100,000 years or so ago, when (by my calculation) Africa and Australia were 7 km closer (continental plates drift slowly).

So how did the baobab make it to Australia?

Well, the next most obvious hypothesis is that an African baobab nut or two (of which the smiling ladies in the photo above are holding a basketful) was carried out to sea and then carried along by surface currents to its new home in Northwestern Australia. But the experts are hesitant, and I understand why. A study of this map of surface currents 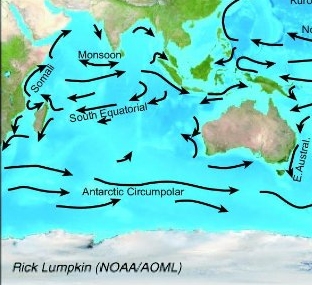 shows that to make it to the Kimberley region, a nut would have had to fall into the Somali current and been carried northward, then it would have had to get taken eastward by the northern branch of the Indian Ocean’s Equatorial current, all the way to the island of Sumatra. At that point, our bobbing baobab nut would have had to hug the southern coastlines of Sumatra and Java, to then, somewhere around Bali or Timor, change course, coming southward and westward, finally making a landing in the Kimberley. As the sad fate of the Malaysian flight MH370 has shown, anything floating further south in the Indian Ocean would tend to be carried westward rather than eastward. The map below is a computer-generated estimate of where debris of the plane could have drifted from the original hypothesized crash point (the square point on the border of the blue area); the red area is where debris might have been 18 to 24 months after the crash. 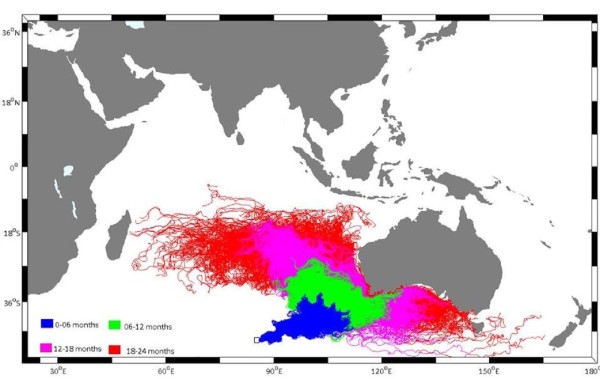 If this ocean voyage of the baobab nut occurred at all, it would have taken place during the last ice age. This started 110,000 years ago, which is pretty much when the two baobab lines separated, and finished 12,000 years ago. Among other things, the ice age caused sea levels to drop, which modified coastlines in certain parts of the world. In turn, these modifications could have affected the direction of surface currents. So to be really correct, one should look at a map of someone’s best guess of surface ocean currents during the ice age. Unfortunately, I didn’t come across any such map. This map, however, shows where the coastlines were at the time.

It seems there were no big changes in the area we’re interested in except around the islands of Indonesia and New Guinea, where the lower sea levels connected up a lot of the islands (and, en passant, made that last hop of human beings into Australia 50,000 or so years ago a good deal easier). I’m no ocean currentologist, but I rather think that the blocking up of the straits between these islands might actually have made the last leg of the baobab nut’s journey, that right turn from Bali to Australia, somewhat easier.

How long would such a trip have taken? Well, it took debris from MH370 about two years to wash up on the coast of Mozambique, so I would imagine that it would take just as long, if not longer, for a baobab nut to travel in the opposite direction. Could a baobab nut soak that long in the ocean and still be able to germinate upon arrival? We can look to the coconut for an answer; a coconut, at least the original version before human beings started messing around with it, was designed to be dispersed by sea.

There happens to be a lot of argument on this point, but no-one has ever claimed that a coconut can last two years in seawater. A maximum seems about three months, and even that has been challenged. So I seriously doubt that a baobab nut, even if it had managed to make it to the Kimberley by sea, would have been in a fit state to germinate.

So, how else could the baobab have arrived in the Kimberley?

The next most obvious hypothesis is that human beings brought the baobab with them, because they too originated in Africa. Could the ancestors of the Aboriginal people, who are currently thought to have arrived in Australia 50,000 years ago (plus or minus 10,000 years), have carried the baobab nut with them? Well, since they left Africa about 120,000 years ago and took 70,000 years to reach Australia, that would have meant planting the baobab as they went along. This is not actually as crazy as it sounds. Both in Africa and in the Kimberley there is strong evidence that the local hunter-gathering groups deliberately carried the baobab with them and planted it in new areas – the tree is a great source of many things other than the nut. But if this really did happen, then shouldn’t we find baobabs along their most probable migration route?

Yet, apart from southern Arabia, none of the places between Africa and Australia have baobabs, or even baobab remains. Of course, it could be that climate changes in these places after the end of the ice age killed off the baobabs, or it could be that they were killed off by the after-effects of the absolutely gigantic volcanic eruption of Mount Toba in the island of Sumatra about 70,000 years ago

the ash from which fell over a huge area, much of it on the migration route to Australia, which could have choked plant life. 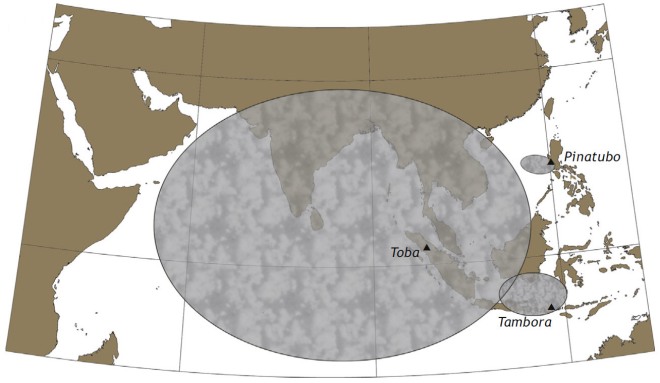 It has also been argued that many years of permanent darkness set in after this event, a sort of “nuclear winter”, which of course would have affected the ability of plants to photosynthesize.

But still, all in all, the chances of the baobab having gotten to Australia via this long, long migration route seem very slim.

So how, then, could the baobab have gotten to the Kimberley?

And here, gentle readers, we step into a wasps’ nest. One Australian scientist has made the radical suggestion that tribes sailed from the east coast of Africa to the Kimberley, carrying baobab nuts as food. He claims that the rock art of the Kimberley (which I will cover in a future post) is (a) far older than is generally thought, maybe 50,000 years old, and (b) shows that 50,000 years ago the painters knew the use of boats. 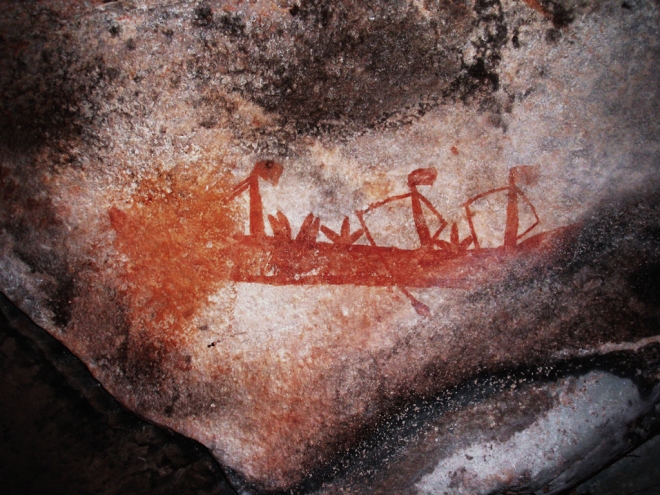 He suggests that the nuclear winter caused by Mount Toba led them to sail east, to the source of the sun, to find it again, which coincidentally would have brought them to the Kimberley (and he argues that there are strong connections between Kimberley’s rock art and the rock art of East Africa).

Well, as readers can imagine, such views have the Australian archaeological community in a tizzy. It certainly is a pretty far fetched theory. But somehow we have to explain how the baobabs got to the Kimberley, right? Anyone of my readers have any ideas?

5 thoughts on “THE AUSTRALIAN BOAB TREE”