There is a quiet square not too far from where my wife and I live in Milan which goes by the name of Piazza Affari. As the name suggests, this is meant to be the pulsating business and financial centre of Milan. That certainly was the idea when the square was fashioned back in the early 1930s by demolishing a whole block of buildings in front of the just completed stock exchange, the Palazzo Mezzanotte. 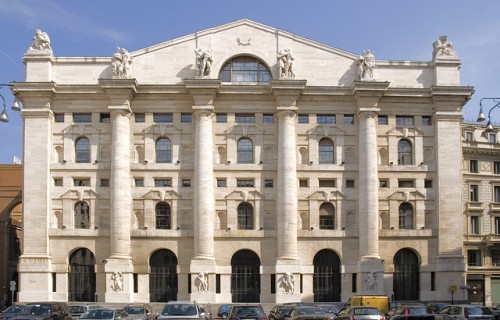 This quite handsome building clad in white travertine is often considered “typical” Fascist architecture because of when it was constructed, but in truth it is actually a nice exemplar of the Italian architecture of the turn of the century, most famously exemplified by Milan’s main train station.

Another building opposite the stock exchange, finished in 1939, closed off the new square.

Well, the war came and went, this corner of Milan survived the intense Allied bombing of the city, Fascism fell, and life went on. Then, in 2011, as part of a plan to make Milan a centre of contemporary art, the-then municipal government wanted to hold an exhibition of the works of Maurizio Cattelan, a famous Italian contemporary sculptor well known for satirical sculptures. As part of the deal, the city commissioned an outdoor work from the artist. After some back and forth, it was decided to place the piece in Piazza Affari and Cattelan came up with this. 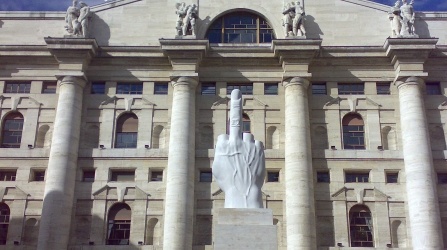 Of course, everyone immediately decided that the artist was giving the finger to Italy’s financial sector – this was a few years after the near meltdown of the banking sector worldwide, whose impacts on the Italian economy were then still being felt (and continue to be felt). The denizens of the stock exchange hated it, everyone else loved it. What was meant to be a temporary exhibition has turned out to be permanent. It has been pointed out, and the photo above shows it clearly, that the hand is not actually giving the finger to the stock exchange but, if anything, to the anonymous building on the other side of the square. And the artist himself has said that the sculpture was actually a commentary on the fall of Fascism – some complicated explanation to the effect that the hand really represents the Fascist salute, and the chopped-off fingers represent the fall of Fascism; its positioning in front of a building seen as Fascist is what links it to Fascism. Others have commented that this finely sculpted hand (look at those veins!) in lovely white marble, in a square with its vaguely Roman look (look at those arcades attached to the 1939 building), reminds them of a De Chirico painting.

None of this matters. What is important is what people think. And people think the finger is being given to all those goddamned bankers who screwed all of us over, and they cheer the artist on.

Statuary in public places has always excited intense emotions. Staying in the world of white marble, consider the statue of the naked Alison Lapper, a British artist born without arms and only stubs of legs, and eight months pregnant when the statue was made.

In 2005, this statue was placed as a temporary exhibit on the fourth plinth at Trafalgar Square in London, which has been empty ever since the square received its current look back in the 1830s. 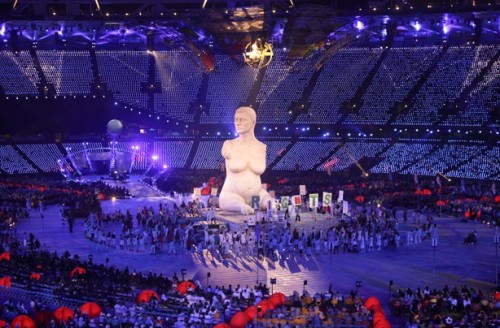 But what about that granddaddy of white marble statuary, Michelangelo’s David?

(another statue, I note in passing, with lovely hands)

Today, we look at it simply as a glorious work of art, but at the time of its unveiling it was also a highly charged political statement. Already, David had a special place in the heart of the Florentines. They identified with the puny boy who destroyed the huge, nasty Goliath (seen to represent Rome, the French, the Holy Roman Emperor, or any other power threatening it at any particular moment in time). A committee of notable artists, including Da Vinci and Botticelli, was charged with deciding on its emplacement. They chose to have it stand in Piazza Signoria, at such an angle that the statue glared defiantly towards Rome. 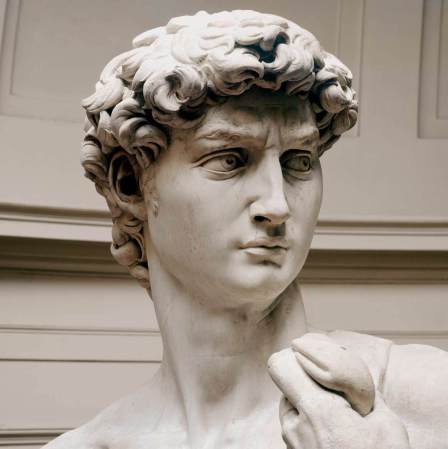 A statue whose unveiling in 1992 had particular resonance for me was that of Sir Arthur “Bomber” Harris, commander-in-chief during the Second World War of Britain’s Bomber Command.

As the picture shows, it is the typical statue of some Worthy Person which dots every public space in Europe, nothing terribly exciting artistically. But Bomber Command was the group responsible for the so-called area bombing during the War which wiped out entire German cities, many of no military value. Dresden is perhaps the best known. 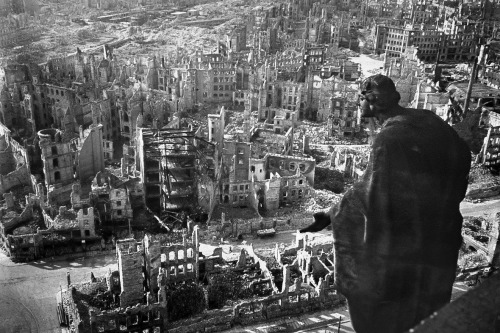 There are many people, and I include myself among them, who believe that these bombings were a crime against humanity, so I have difficulty feeling any disapproval for the person who did this to Harris’s statue. 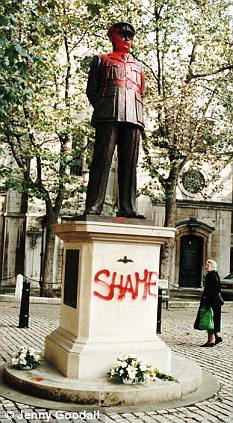 To be fair to Harris, he was not the only person in high circles (Winston Churchill included) who thought that area bombing was a good idea, but he implemented the plan with particular relish.

The placement of politically-charged art in public spaces continues. Banksy’s painting in the Calais “Jungle” of Steve Jobs as an immigrant trying to get in shows this. 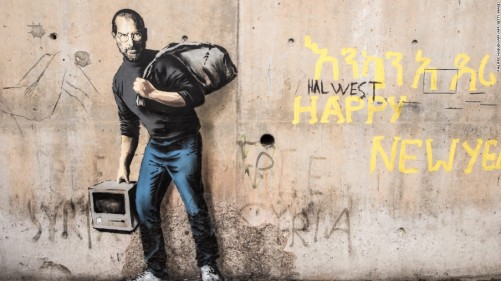 In a rare statement on any of his art, Banksy commented that he wanted to remind people of the value of immigrants. If Jobs’s father, an immigrant from Homs in Syria, hadn’t been let into the US we wouldn’t have Apple. In this day and age of heated debates, especially in Europe, about refugees and how many to let in, Banksy has very publicly taken sides. It’s a pity that his high mindedness has been subverted, first by an entrepreneurial inhabitant of the Jungle demanding to be paid 5 euros to view the painting and then by a nihilistic vandalizing of the painting.

I presume that the vandalizer was doing no more than celebrating The Clash’s third album. Such is life.

Let’s see what this year will bring us in politically-charged statuary.