We decided not to struggle up the path which leads from the railway station up along the spur of the hill to the small church of Sant’Apollinare at the top. We did it a few weeks ago and it’s brutally steep. Instead, we took the bus that starts from in front of the village fishmonger, timed to leave just after school breaks up. Together with one shy schoolgirl we zipped up the road which zigs and zags its way up the hillside. 10 minutes later, just shy of 4:30, we were deposited on the small parking area by the church. The sun was beginning to set over the Riviera on the other side of Genova, bathing the little church and the distant Monte di Portofino in its ruddy rays. 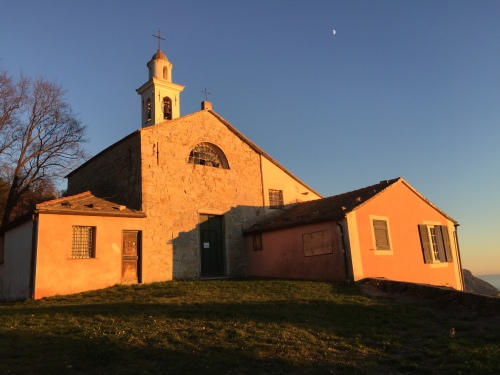 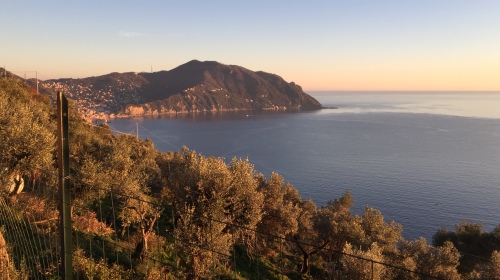 We were taking the path that led down to the little town of Recco, nestled at the foot of the Monte di Portofino. We needed to get down before it got too dark. We started walking, passing through olive groves where the hillside’s exposure to the sun was good 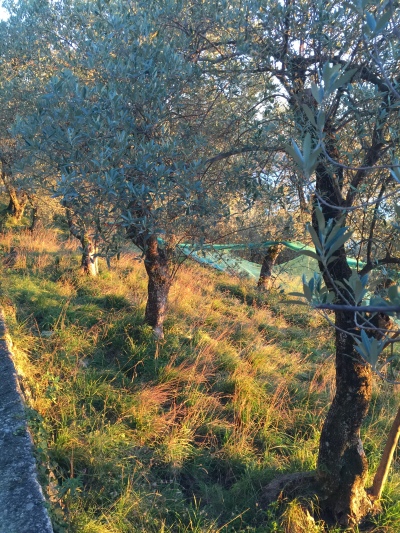 and through Mediterranean maquis where it was less good 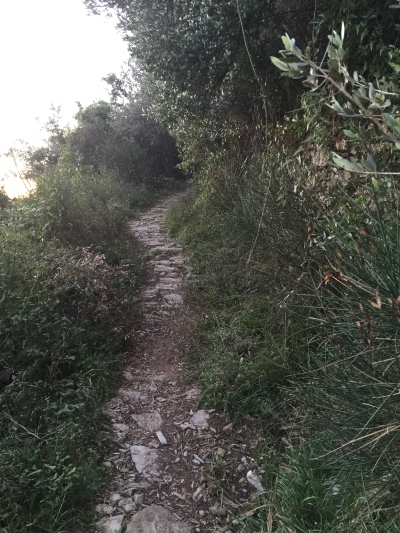 and where earlier farmers had not bothered to terrace the hillside and plant olive trees. 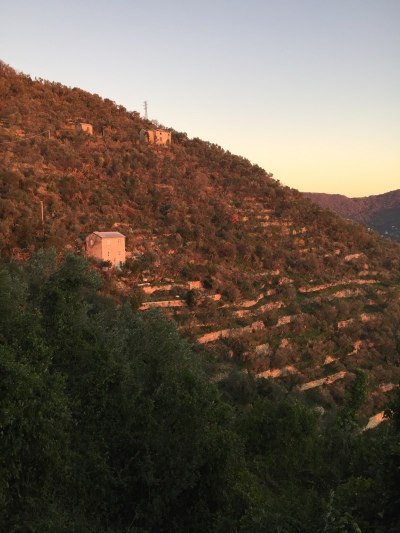 We passed the Torre dei Saraceni, the Saracens’ Tower, which according to local legend was built as a lookout to warn local villages when raiding parties of Barbary pirates based in Northern Africa (or maybe closer in Corsica and Sardinia) were approaching, looking to carry away loot and people to be sold as slaves in the market places of Tunis and Algiers (a plague which Italy’s coastal communities suffered until the 1800s). 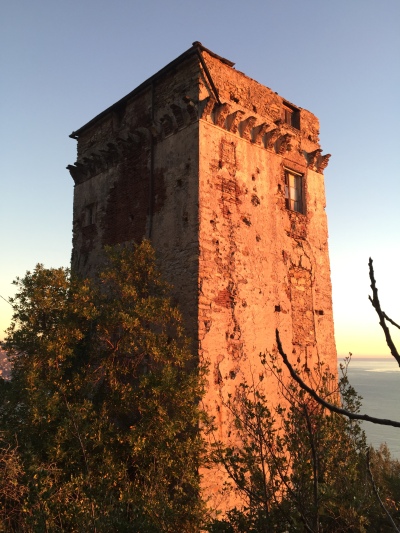 When we were young and foolish, my wife and I had fantasized about living here, brushing aside such practical questions as where the nearest shop was to buy food.

On we hurried, with the Monte di Portofino looming larger. 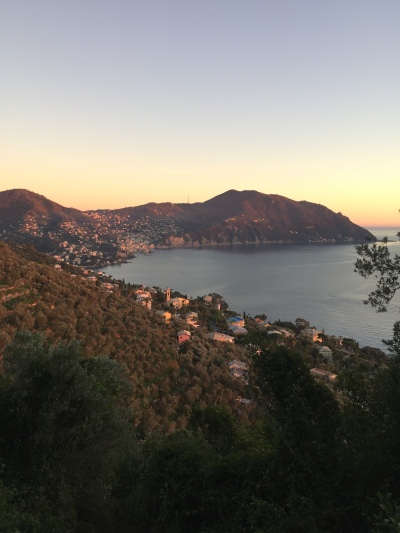 Out to sea, ships were hurrying also, to reach the safety of the port of Genova. 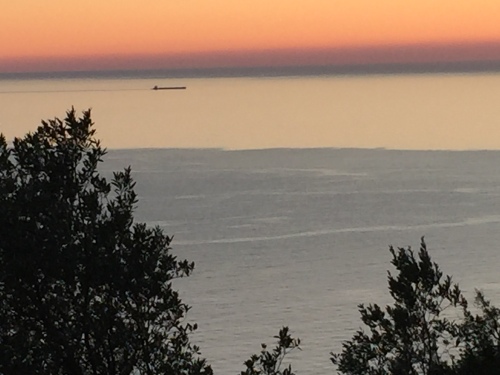 We watched as the sun finally set across the Bay of Genova, silhouetting the Torre dei Saraceni. 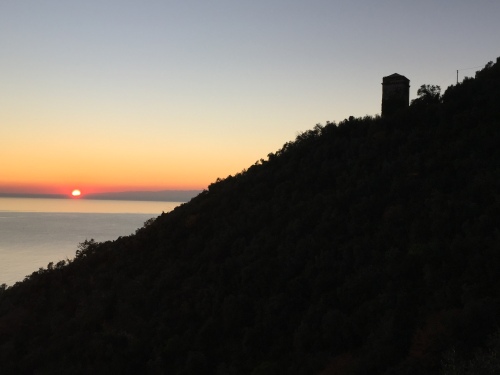 We went on in the sunset’s afterglow, down dimly-lit steps 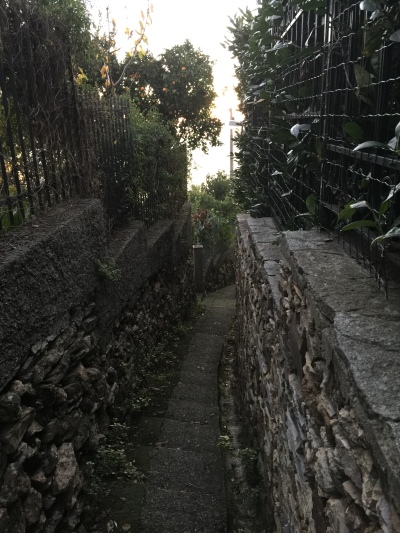 arriving finally in the small village of Polanesi on the outskirts of Recco. Our path skirted the parish church 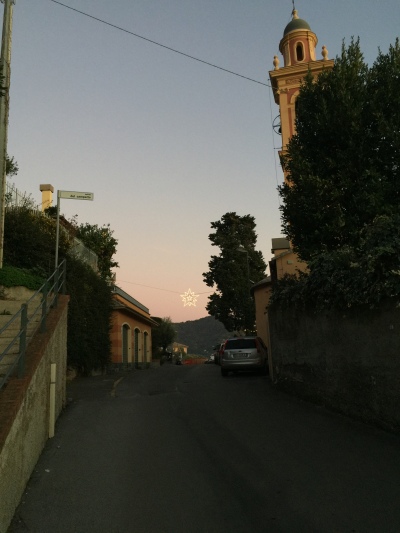 into whose dim interior we quickly dipped. Its floor hinted at some tragedy 200 years ago 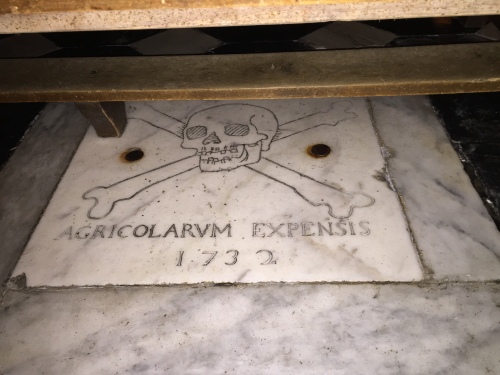 while its outer walls proclaimed a more recent tragedy, the retreat from Russia in 1942-3, in which many Italians died. 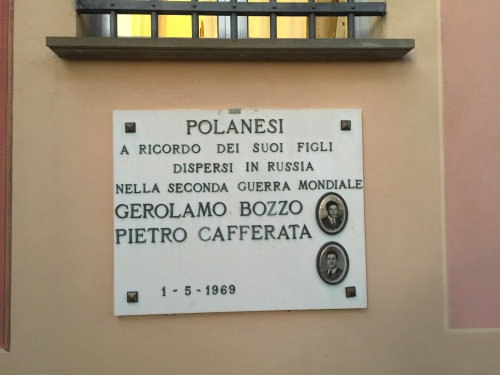 The moon alone was now shining in the sky. 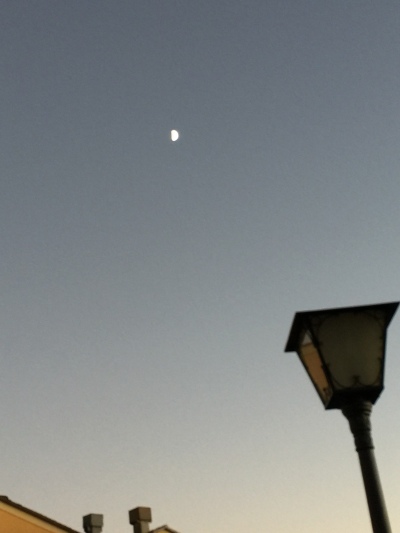 By its dim light, and in places by the light of my phone, we stumbled down the last steps to finally reach the Via Aurelia. 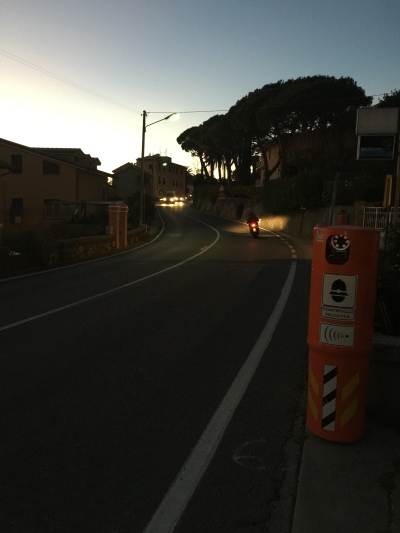 When I was young and foolish, I thought this really was the trace of the old Roman road, but I discovered later that the Romans never bothered to build a road through this wild and mountainous region; they just went by boat along the coast.

A short walk brought us to Recco, now enveloped in darkness. 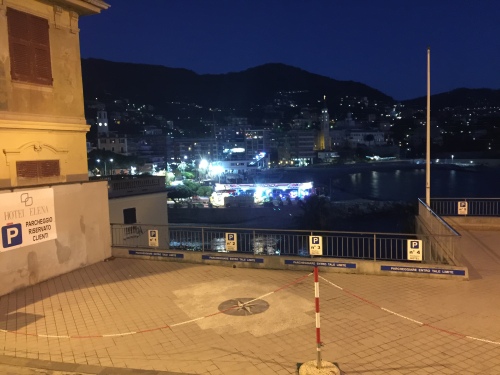 We lowered ourselves into the chairs of the nearest bar and had ourselves a well-merited Aperol Spritz. 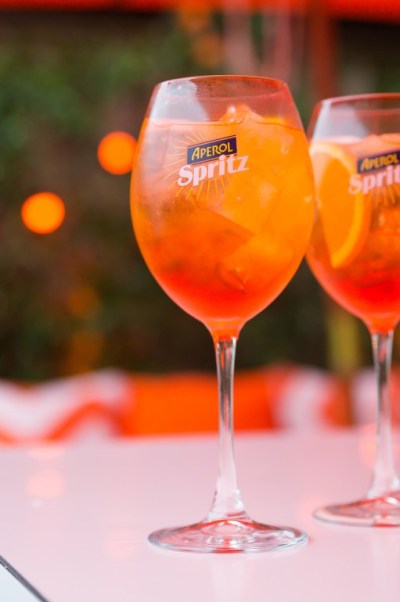 all photos: mine, except for

2 thoughts on “A WALK IN THE SETTING SUN”