It was snowing when we got up yesterday, the first snowfall of the season – in fact, the first time there has been any precipitation, rain or snow, in the last four months in Beijing. The city was still quiet after the Chinese New Year, so it was with pleasure that I crunched my way to work through the deserted streets and along my piece of canal, with the small, grainy snowflakes floating down around me. 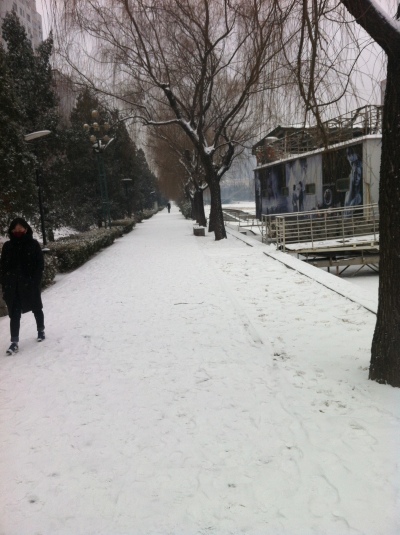 And dimly through the flakes and mist, I perceived a man on the other bank of the canal slowly going through the balletic moves of tai-chi. Magic …

It kept snowing fitfully all day and into the evening, becoming greyer and foggier by the hour. So I just hurried home after work, looking forward to a welcoming wife, a cheerfully lit apartment, a glass of wine, and a plate of pasta. We closed out the world and enjoyed two French detective thrillers before retiring to bed.

This morning, the clouds had been chased away along with the fog, and the sun shone down brightly. How different the world looked! There is nothing like a coating of snow under a bright sun and a clear blue sky to make even the most squalid cityscape look inviting. On our way to morning coffee and lunch, I took a couple of photos of the canal to record the event.

OK, let’s not get carried away here. Quite soon, all that fresh snow will turn into muddy slush, making a misery for us pedestrians as we pick our way round large puddles, warily avoid being splashed by passing cars, and stay ever alert for a hidden piece of ice under our feet . And even when the snow is still fresh, the view simply cannot beat a snowscape in the mountains. My wife is a good and enthusiastic skier, and when the children were young she liked to take them skiing in the Alps. I, on the other hand, dislike skiing, so it was always with a certain grouchiness that I accompanied them on these skiing expeditions. The traffic jams to get there! The crowds at the shop to hire the gear! The astronomic cost of the ski passes! The kilometric lines to get on the ski lifts! All those peacocks parading their latest ski gear! The morons who skied far too fast down the crowded slopes! The icy wind turning my face into a piece of numb codfish! But even grouchy old me could not avoid a smile when suddenly confronted at the turning of a path with vistas of virgin white snow softly pillowing rocky hill and dale and gathering protectively around the pine trees, while the mountains glittered behind against a backdrop of a deep blue sky.

The only artist I know who has ever captured the beauty of mountains in the winter is the Austrian painter Alfons Walde. Walde was from Kitzbühel in the Tyrol, so he knew the Alps well.  From the mid 1920s onwards, he painted a series of pictures of the Tyrolian Alps during winter. I show here a selection, starting with the first of his paintings I ever came across, in the form of a poster advertising a show of his works in Vienna. I still have that poster somewhere. It is his “Ascent of the Skiers”, 1931

Walde also liked to paint the inhabitants of the Tyrolian villages. They still wore their traditional costumes back then. There’s still a faint echo of this in Austria’s traditional jackets for men and the dirndls the women wear. This is his “Auracher Church”, 1927-30 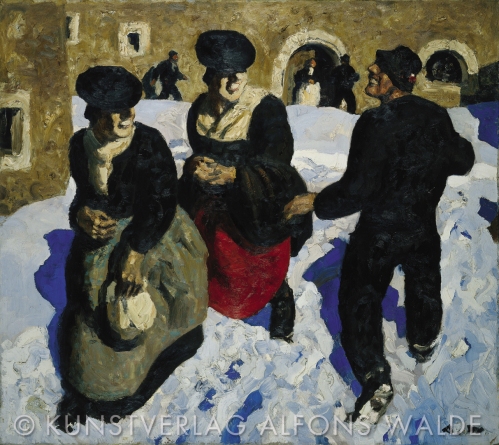 I will be frank. I wouldn’t mind owning one of Walde’s paintings.  But I’m not a millionaire. The best I’ve managed is a print by another Austrian artist

But hope springs eternal. You never know, I may find a Walde in my attic one day.

Yesterday, we had the first heavy snowfall of the year in Beijing – there had been some earlier flurries, but no more than that. I don’t want to exaggerate; there wasn’t really a huge amount of snow, which was just as well because Beijing drivers have no idea how to drive in snow and their cars are not equipped for it. But for Beijing it was significant. As the snow began to pile up, people – and not just children – were out on the streets making snowmen and throwing snowballs, while some of the more responsible ones were clearing the pavements; I even saw a snowblower for the first time here!

It was all quite picturesque, so I was moved to haul out our old CD “The Essential Carols Collection” which we always played at this time of the year when the children were with us, and gave it a whirl. 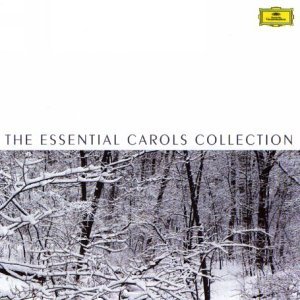 Out floated those hoary old favourites, “Once in Royal David’s City”, “The Holly and the Ivy”, “Silent Night”, “O Come All Ye Faithful”, and on and on, while the odd tear or two formed in the corner of my eye.

But squeezed in between “O Tannenbaum” and “Ding Dong Merrily on High”, comes John Tavener’s “The Lamb”, an ethereally, achingly beautiful modern carol. Every time I get to this part of the CD, I have stop whatever I’m doing and sit down and just let the music flow through me. Tavener uses the words of William Blake’s The Lamb for the carol:

I always wanted my mother to hear this carol, she loved William Blake. But this will join that long list of regrets, things we wished we had done but left until it was to too late.