I’ve written much earlier about the culinary dowry which my wife brought to our marriage, a splendidly long list of Italian foods and dishes against which my contribution shriveled to nothingness. However, the columnn on my wife’s side of the kitchen ledger should have been even longer. I wrote that first post when we were living in Beijing and I drew up the list from memory. Now that we are back in Italy a good part of our time, I can closely scan the supermarket shelves to see what delights we have come back to. One of these is the vegetable known in Italian as coste, chard in English (often called Swiss chard, although there is absolutely nothing Swiss about the plant). 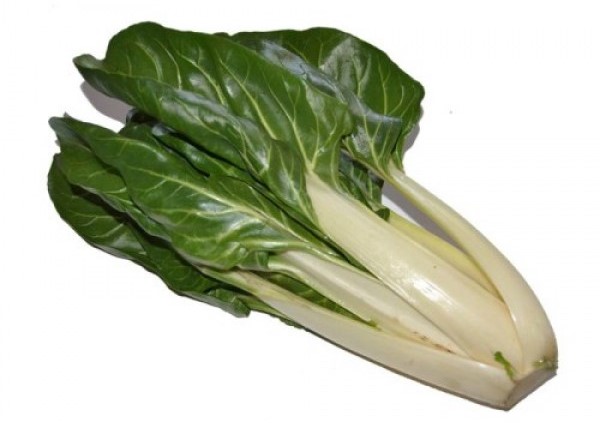 When I first tried coste all those decades ago, cooked by my mother-in-law, I was immediately struck by two certainties: the first, that I had stumbled across a culinary treasure; the second, that this treasure had never crossed my lips either in the UK or in France – neither of my grandmothers seemed to have been familiar with this worthiest of vegetables.

The wonderful thing is that the cooking method for chard which I prefer adheres strictly to my golden rule for all things in life, the KISS principle (Keep It Simple, Stupid!). Strip the stalks of the leaves. Boil each briefly in water. Then briefly fry each separately in butter (oil will also work). Serve. That’s it. Yes, you can add this and that, garlic for instance, but it’s really not necessary.

The stems are by far the best. Cooking them gives them a delicate, slightly sweet taste that inexorably leads you to eagerly slip the next stalk into your mouth. They are addictive.

Readers looking on line will see that many recipes consider chard a side dish, to be eaten as a complement to something else. I disagree. They stand on their own, as a complete dish. If anything, the stalks can be the main dish, the leaves the side dish. Many other recipes mix it into soups or into quiche-like things or into pasta sauces. Forget it. Just eat them on their own.

I thought perhaps that with the broadening of the British culinary horizons over the last forty years I would now find chard commonly stocked in supermarkets. But no. I went on Sainsbury’s and Tesco’s websites to see what vegetables could be ordered online, and chard was nowhere to be found. I double-checked with a friend of mine in the UK and he confirmed that chard was not readily available in supermarkets (although he did note that his sister, who has a green thumb, grows them in her vegetable garden).

It’s funny, that, because the wild ancestor to chard is sea beet.

For reasons which will become clear in a minute, I also show it uprooted.

Sea beet can be found along along the coasts of the UK more or less up to Scotland, so it is a plant that surely made its way into the British cooking pot very early on, when people ate whatever the local environment offered and when hunger was a constant companion. From a quick zip through web sites run by enthusiasts dedicated to recreating ancient recipes, chard was certainly eaten in Britain in Medieval and Tudor times (when it was called beet; Lord knows why the name changed). Take this entry from John Gerard’s 1597 Herball:

Beta alba. White Beets….the white Beete is a cold and moist pot-herbe…Being eaten when it is boyled, it quickly descendeth … especially being taken with the broth wherein it is sodden…
Beta rubra, Beta rubra Romana. Red Beets, Red Roman Beets …The great and beautiful Beet last described may be vsed in winter for a salad herbe, with vinegar, oyle, and salt, and is not onely pleasant to the taste, but also delightfull to the eye. The greater red Beet or Roman Beet, boyled and eaten with oyle, vinegar and pepper, is a most excellent and delicate sallad.

(It seems that by 1597 farmers had already produced beets of varying colours – the earlier photo of uprooted sea beet shows that white was originally the only colour complementing the green.)

For some reason, chard seems to have fallen out of favour with the greater British public in later centuries. I’ve read that spinach, to which chard is often compared, could have been the culprit, displacing chard in the hearts of consumers. Naughty spinach …

The opposite fate has befallen another descendent of see beet, the beetroot.

The quote above from Gerard goes on:

But what might be made of the red and beautifull root (which is to be preferred before the leaues, as well in beauty as in goodnesse) I refer vnto the curious and cunning cooke, who no doubt when he hath had the view thereof, and is assured that it is both good and wholesome, will make thereof many and diuers dishes, both faire and good.

From which we can gather that the root of the chard/beet was not eaten by Brits in 1597. But things changed somewhere along the way, for if the selection on offer from Sainsbury’s and Tesco’s is at all a guide to general British preferences in vegetables, beetroot does now have a following in the UK. Perhaps the reason for this change of heart can be traced to the growth in the size of the root. Gerard’s illustration of the Red Roman Beet in his Herball shows it to have a pretty skinny root in his day, much like the root of the sea beet. Perhaps only when a myriad of farmers had patiently coaxed the beet’s root to grow mightily in girth did it become popular.

Not that the British have ever done anything very exciting with the beetroot. The best they have managed to do is to pickle it.

That sweet-sour combination certainly seems to be a winning combination for the beetroot, and has been brought to a glorious culmination by “curious and cunning cookes” with the borschts of Eastern Europe. Every country from that part of the world has its own borscht tradition, but there is a commonality in all the recipes. Sauté a variety of vegetables including, of course, beetroots. Add stock. Simmer for a bit. Serve with a dollop of sour cream. The result looks something like this.

And there is of course Gerard’s suggestion to eat them with “vinegar, oyle, and salt”.

This celebration of the sea beet and its offspring would not be complete without a mention of two more of its descendants, neither of which are normally eaten by humans: the splendidly named mangelwurzel, developed in Germany as fodder for cattle

and the sugar beet, developed – also initially in Germany – from the sweetest of the mangelwurzels around at the time, as an alternative to sugar cane.

I’m not sure we should celebrate the sugar beet, since there is a growing consensus that sugar is a plague.

Mangelwurzel, on the other hand, deserves to be given a big hand. We don’t eat it, but farm animals like to eat it very much

(as do their wild cousins)

and we like eating the farm animals. On top of this, mangelwurzel is used to make jack-o-lanterns in certain parts of the UK

an art form that is surely worth celebrating.