My wife and I have been in Kyoto these last three weeks. I was here to once again give my course on sustainable industrial development at the university. But I don’t want to discuss that, I want to talk about a scent wafting on the breeze.

As we walked around the quiet neighborhood where we had taken an AirBnB, I found my nose suddenly being assailed by a very sweet smelling scent. The first few times it happened, I couldn’t locate an obvious source around me and I began to fear that I was suffering from olfactory hallucinations, that a tumor was growing in my brain and was beginning to press against whichever bit it is that controls one’s sense of smell. What made me particularly susceptible to this theory was that the scent was distinctly similar to the one most toilet cleaning products emit; you know, the scent which wafts off that bright blue or pink stuff you squeeze into the toilet bowl, leaving your toilet smelling like heaven.

Maybe the tumor was triggering olfactory memories of my toilet … Luckily for my growing levels of paranoia, the third or fourth time it happened I located the source. It was an unprepossessing tree on the corner of the road.

It was covered in small orange flowers.

Relieved that the scent was not a figment of a diseased brain, I set to work trying to figure out what plant it was. A google search quickly revealed its Japanese name to be kinmokusei, and that in the month of October it fills the air with its sweet scent. A further search revealed that its official name is osmanthus fragrans, with its English names being sweet olive, tea olive, or fragrant olive (the reference to olive apparently having to do with a similarity in leaf shape to the olive tree).

According to its Wikipedia entry, the several varieties of osmanthus are “native to Asia, from the Himalayas through southern China to Taiwan and southern Japan and southeast Asia as far south as Cambodia and Thailand”. The mention of China rang a bell somewhere in my (non-diseased) brain, something I had read once, while living in China, about osmanthus jam. Sure enough, the Wikipedia article revealed that the Chinese make an osmanthus-scented jam, but also osmanthus-scented tea, dumplings, cakes, soups, wine, and liquor. My wife and I never tasted any of these delicacies when we lived in China, but that was Beijing, in northern China, outside the osmanthus’s range.

The China connection and the nostalgia it evoked in me made me dig a little more. I discovered that the plant’s relationship with China is long; the Chinese have been cultivating it for some two and a half thousand years – its sweet scent saw to that. As might be expected, the Chinese poets weaved it into their work. Here is Wang Wei, an 8th Century Tang Dynasty poet:

Or here we have the 12th Century Song Dynasty female poet, Li Qingzhao:

I recover from illness,
My temples have turned grey.
I lie down to rest and watch the waning moon
Climb up my screen.
Tender lips meet sweet mace, boiled in water,
Aromatic as tea.
Books and poems are so dear to me
While I sit idle against a pillow.
The outside scene freshens when rain falls.
All day long, facing me lovingly
Is the sweet osmanthus.

Things have come to a pretty pass when a flower’s scent, which made the Chinese poets sing, only makes me think of toilet fresheners! What a dumbing down we are witnessing …

Luckily for me, the Chinese themselves have made a connection between the flower’s sweet scent and more malodorous things. Osmanthus flowers bloom more or less in the eighth lunar month, which is when the Imperial civil service examinations were originally held. 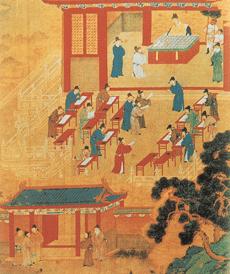 This temporal connection gave rise to a phrase in late Imperial China which was used to euphemistically indicate that a candidate had successfully passed the exam: “pluck osmanthus in the Toad Palace”. Passing the exams would now open up to the successful candidate positions in the administration where myriad possibilities would exist for him to conclude sweet deals to his advantage during the rest of his no doubt illustrious career. Imperial examinations have vanished, only to have their place taken by the gaokao, the university entrance exams.

This is the first critical step to defining how successful a career you can have in China and how much of a life of preferment and sweet deals you will enjoy. “Plus ça change et plus c’est la même chose”, the more things change and the more they stay the same, as the French writer Jean-Baptiste Karr once observed.

While I have been reading up on all this, Typhoon Lan has been brewing in the Pacific to the east of the Philippines. Now it is moving ponderously northward towards Japan. The rain that’s been falling as a prelude to its arrival has stripped the Osmanthus bushes of their flowers.

Their scent is finished for this year. It’s time for us to fly home, hopefully before Typhoon Lan makes a landfall and closes the airport.

One of my abiding memories of Vienna is the magnolias in flower. I suppose it’s always the case that the first months you spend in a new place imprint themselves more forcefully on your brain’s virtual retina than the remaining years. We arrived in Vienna in February, two months later the magnolias were in bloom. It seemed that every garden and every park had its magnolia tree.

We would pass one particularly magnificent specimen as we drove the children up to school every day. It was like living in a multiple exposure photo. Every day, as we swept by, we would note its progress, as the buds opened fully, and then the decay, as the flowers wilted and scattered their petals over the pavement.

A month or so later, it was the turn of the city’s multitude of lilac bushes to bloom, another fond memory which I have of Vienna and one about which I have had cause to write an earlier post.

Yes, they were good times.

And then, when my wife and I came to Beijing, we found our friends the magnolia trees here, waiting to greet us with their blooms after we emerged from our first Chinese winter. A sight for sore eyes, let me tell you, after all that grey dryness of a Beijing winter. There was a pure white variety 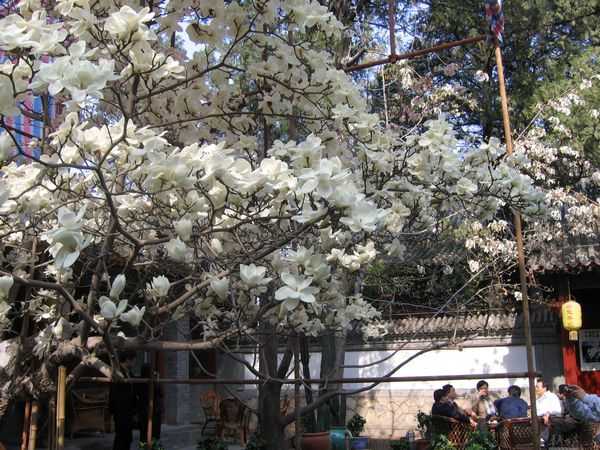 as well as a pinker type which we were familiar with from Vienna.

Then, with the passage of time, I discovered that this tree, which I had, without really thinking about it, assumed was European, was actually Chinese! Actually, it’s a bit more complicated than that. There are nearly hundred different types of magnolia native to China (out of 200-plus native to Asia). The beautiful white magnolia pictured above, which comes from central and eastern China, grabbed the Chinese headlines early on. With its flower rightly regarded as a symbol of purity, it was planted in Buddhist temple gardens and the gardens of the emperors from as early as 600 AD during the Tang dynasty. It is called the Yulan, or jade lily, magnolia; I presume the name refers to the jade-like glossy smoothness of the magnolia’s petals and the sometimes lily-like look of the flower. 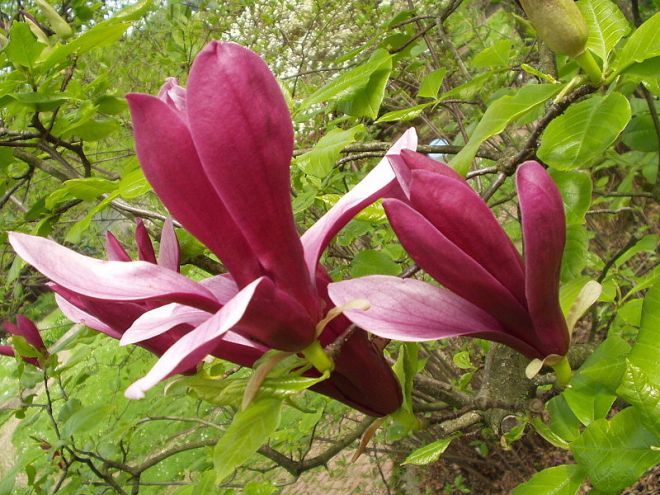 Magnolias of course became favourite subjects of the poets, seeing as they spent hours haunting such gardens. 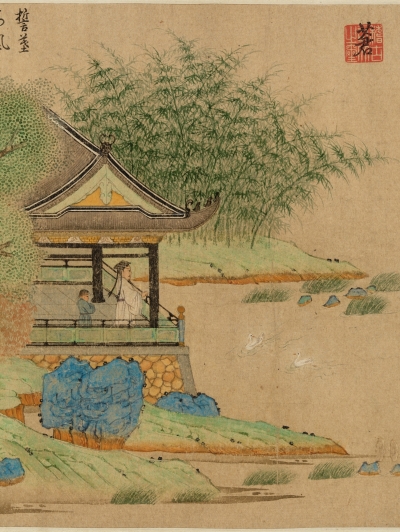 Here is the poem Magnolia Slope by Wang Wei, who lived in the 700s AD and is considered “the consummate master of the short imagistic landscape poem that came to typify classical Chinese poetry” (in the words of David Hinton, who made the admirable translation below).

At home beside this stream, quiet, no one
here. Scattered. Scattered open and falling.

As with many things Chinese which were considered the nec plus ultra by the East Asian fashionistas and trend followers of yesteryear, the cultivation of these magnolias was taken up with enthusiasm by the Japanese, from whence – like the Chinese ginkgo tree of which I have written earlier – it made its way to Europe. And there, in 1820, in the grounds of his château of Fromont near Paris, an ex-cavalry officer turned plantsman, Étienne Soulange-Bodin, crossed the Yulan with the Mulan and created the hybrid saucer magnolia.

With its large, early-blooming flowers in various shades of white, pink, and purple, this cultivar became immensely popular and spread around Europe (including Austria, no doubt, because I’m sure the Viennese magnolia I described above is one of these), the US, and eventually – I suspect – China, in hundreds of different cultivars as plant breeders continued to play with its gene pool.

Here I have to pause, to consider that other great reservoir of magnolias, the Americas. I said earlier that Asia boasts 200 or more types of magnolias. The Americas are host to another 90 or so. In fact, it was in the Americas, in the Caribbean island of Martinique to be exact, that in the 1690s a French botanist by the name of Charles Plumier discovered and named – in the modern scientific nomenclature; of course it already had a native name, the talauma – the magnolia, after yet another French botanist Pierre Magnol (a lot of French botanists in this story …). I haven’t found a picture of his original drawing of the magnolia which he came across but this one will do as a substitute. 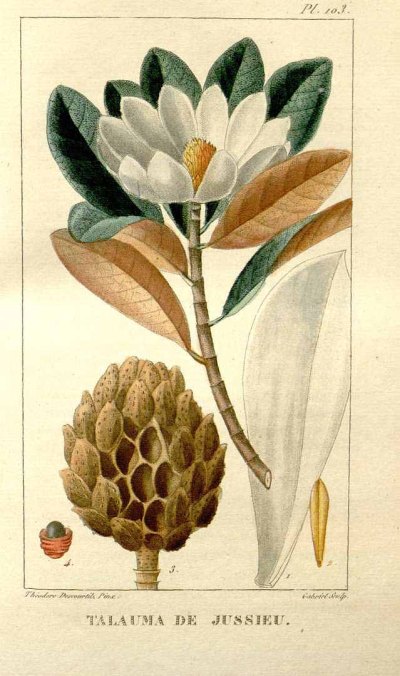 This picture, with its flower surrounded by a thick crown of leaves, sums up nicely a perplexity I had until I did some reading for this post. When we had been in the US, we had come across the southern magnolia, which looked something like this specimen, that is to say, a tree with very thick foliage and a few flowers sprinkled over the whole.

Very beautiful flowers, by the way.

I couldn’t relate all this to the magnolias like those above, which are first completely covered with flowers and only get their leaves after the flowers have fallen. Well, the fact is, they are – botanically speaking – part of the same family. It’s just that it’s a very large family (some 300 members all told), and like in all large families distant cousins don’t necessarily resemble each other very much.

Which brings me to my final coda. The magnolia cousins have drifted so far apart because it is an old – very old – genus. It branched off the main tree of trees, if you get my drift, 100 million years or so ago. Fossils of plants identifiably belonging to the Magnoliaceae have been found dating back to 95 million years ago, while a 20 million year-old fossil has been found of the cucumber magnolia, which is native to the Eastern US and has this small flower with lovely yellow hues (in fact, these yellow hues as well as the tree’s cold hardiness have been exploited to create new yellow-flowered hybrid magnolias).

Magnolias are so ancient that they came on the scene as flowering plants before bees, or butterflies, or moths, existed to help along with pollination. So magnolias have evolved to use for pollination the only insects which were around at the time, beetles or flies.

And this co-existence with beetles explains the rather leathery petals magnolias have. Compared to bees, beetles are clumsy insects, clomping around all over the flower and with a tendency to snack on the petals as well as the nectar. The leathery petals protect the flowers from these lumbering but necessary partners in the act of procreation.

Oh, and by the way, magnolia flowers don’t actually have petals, they have tepals. And that’s because the flowers are quite primitive, so their sepals and petals are not distinct and differentiated (no idea what that really means, but it sounds impressive).