One of the things I love about art is to see how different artists deal with the same theme. Take the Binding of Isaac, the biblical story of Abraham who was ordered by God to sacrifice his son Isaac as a test of his faith. It was a hugely popular subject in Western art.  The scene almost always has Abraham about to sacrifice his son Isaac, who is lying on an altar with a rictus of fear on his face and the knife at his throat, and being stopped at the last second by an angel pointing to a ram as the alternative sacrifice.  The viewer is always led to think, “well, that was a close run thing”. I don’t know how many times the scene was painted over a period of five hundred years; could it be several thousand? Every museum seems to have two or three of these paintings hanging somewhere on its walls.

By now, my eyes glaze over when I see yet another Binding of Isaac. Yet once, several years ago, I was stopped dead in my tracks by a version I came across in the museum of art in Genova. The artist, whom I no longer recall, had caught an expression on the boy’s face that was so … real! The kind of expression you see when a child is on the edges of a “grown-up” discussion between adults, trying to follow, but not wanting to make himself noticed. It was a look I had seen on children’s faces many, many times.  In fact, I saw it again a few weeks ago during a BBC interview in Syria somewhere. The interviewer was talking to some men, and there was a boy hanging around on the visual edge of the camera following the conversation intently. Obviously my painter had decided on another story line, which I read this way. Abraham has solemnly told his boy to come with him, there has been a troubled, silent walk to the place of sacrifice, the boy feeling something serious is up but not knowing what. His father has told him to climb up on that ledge, there’s a good boy, and then suddenly a wonderful stranger appears and is having this serious talk with his father. Still in the act of climbing onto the ledge Isaac is listening intently without really understanding. The painter has stripped all artifice out of the background; no trees, rocks, or far-away hills, just a neutral monochrome backdrop. This could be a scene on any corner of an Italian street. Magic …

Why am I mentioning this? Well, last weekend I was at an art exhibition organized by the People’s Liberation Army, to celebrate the 85th anniversary of the PLA’s founding.  Naturally enough, the vast majority of the many, many – too many – works on show had a military subject. And they nearly all fell within certain clear typologies: battles against the Japanese; romantic visions of PLA’s modern weaponry; members of the Armed Forces on exercise or in training, enjoying every minute of it; the Armed Forces selflessly helping out in various emergencies; retired ex-servicemen and women; takes on the Chinese traditional landscape painting, but with army units being the human element in them; a strange set of paintings of women of the Armed Forces, but in dreamy, quite unmilitary poses; and of course, many featuring Mao and other senior revolutionaries beaming at the viewer.

As with the Binding of Isaac, the manner in which the artists treated these various topics quickly became tediously familiar. But some works arrestingly broke the mould. Consider this painting, part of the “battles against the Japanese” type.

There are the usual soldiers attacking, the usual smoke of battle, the usual explosions. But our artist has captured beautifully the essential anonymity of battle. These soldiers have no faces, they are just forms looming out of the smoke and haze, a haze perhaps created as much by the fear in the defenders who are waiting with us, the viewers.

What about this one, which I suppose would also be part of the “battles against the Japanese” type. 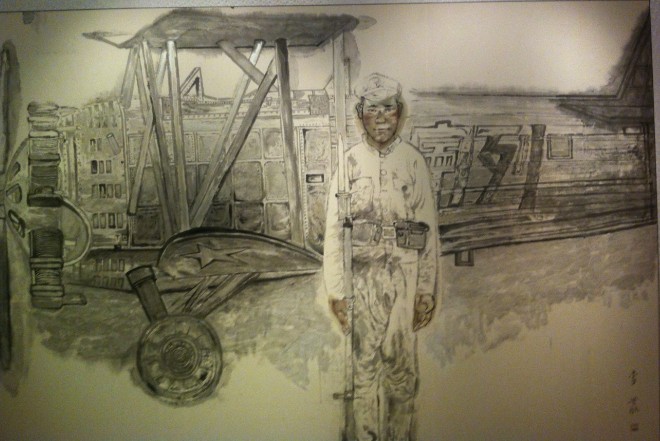 Instead of the normal storyline of the romantically rugged peasant joining the army of the people, we see here a young peasant lad like so many I see in Beijing working on the construction sites with the modern label of “migrant worker”. This lad, who probably only the previous day had been planting rice, has now been put into a badly fitting uniform – probably they come in only one size –  and told to stand guard in front of what looks like a rather dicey biplane. So there he stands, stolidly looking out at us, with no sense of military bearing, wondering what time chow will be served.  His modern counterpart is the horde of young migrant workers in badly fitting security staff uniforms who stand guard at the doors and gates of innumerable buildings throughout Beijing, wondering what time they can get off for dinner.

And this one, which again falls in the “battles against the Japanese” type, but is part of a sub-genre which depicts cossack-type soldiers, mounted on horses and wearing vaguely Central Asian looking clothes. I don’t know enough about the heroic struggles of the PLA but I presume they included troops from the Central Asian borderlands of China. 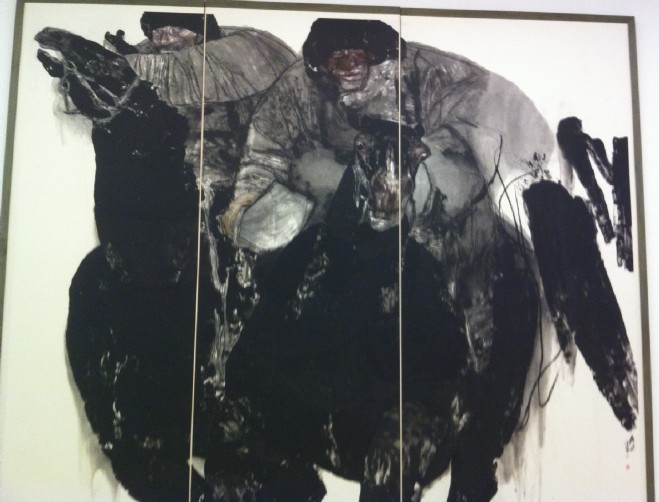 It is a wonderful construct of blocks of colour, all black or grey with just a hint of red in the faces of the two riders. It is abstract enough in design that at first glance one doesn’t understand what it is. The viewer has to take several steps back for the painting to resolve itself, and then he finds himself staring upwards at these kindly looking horsemen from the steppes. And the sabre, common to all this genre, becomes simply a wash of black. The only sign of anything military is the barrel of the gun poking up near the face of the second rider.

Or take this construction,  a jet taking off from the deck of an aircraft carrier, part of the “modern weaponry of the PLA” type.

The artist has reduced the subject to its essentials – one aircraft carrier, one jet, two colours and shading. No sea, sky, clouds, sailors, or any other clutter usually associated with the type. Just two lovely shapes.