It was difficult for my wife and I not to make comparisons with the Tate Modern when we visited the newly opened Shanghai Museum of Contemporary Art. Like the Tate Modern, the museum is housed in an old power station on the edges of a river running through a big city. And in this country where copying is a way of life, it was hard not to see the whole enterprise as just a me-too Tate Modern. 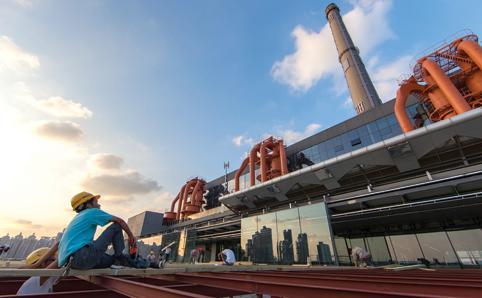 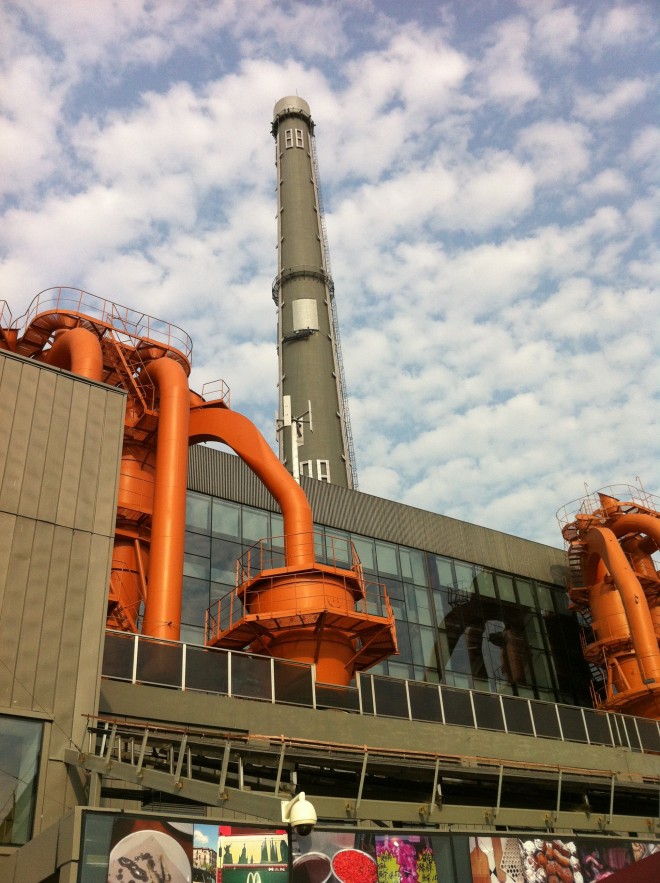 But let’s not be too negative. Let’s just go and make our visit.

Our understanding is that the mission of the Power Station of Art, as it is cutely called, is to focus on post-1980 contemporary art, mainly from China. It is not clear to us if the museum will use just the power station or if it will spread to some of the other adjacent old Expo pavilions. When we visited they were using just the power station, but there seemed to be works going on in the near-by spaces. I suppose this gives us an incentive to come back another time to check things out.

Anyway, when we went they were holding the Ninth Shanghai Biennale, or Biennalé as the Voice on the show’s audio-guide called it. There was a lot of dross as there always is in these kinds of shows, but a few things stood out. I show some photos below in no particular order.

This greeted you as you entered the building. 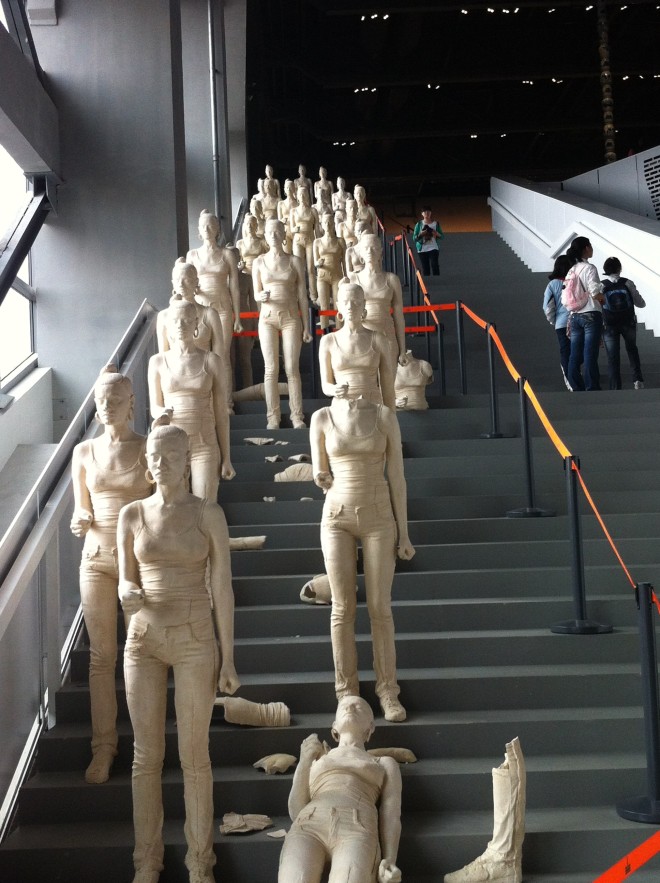 In the entry hall – hugely high, it must have been the generator room – there was this sculpture; I’m sure I saw a smaller version of it in San Francisco. 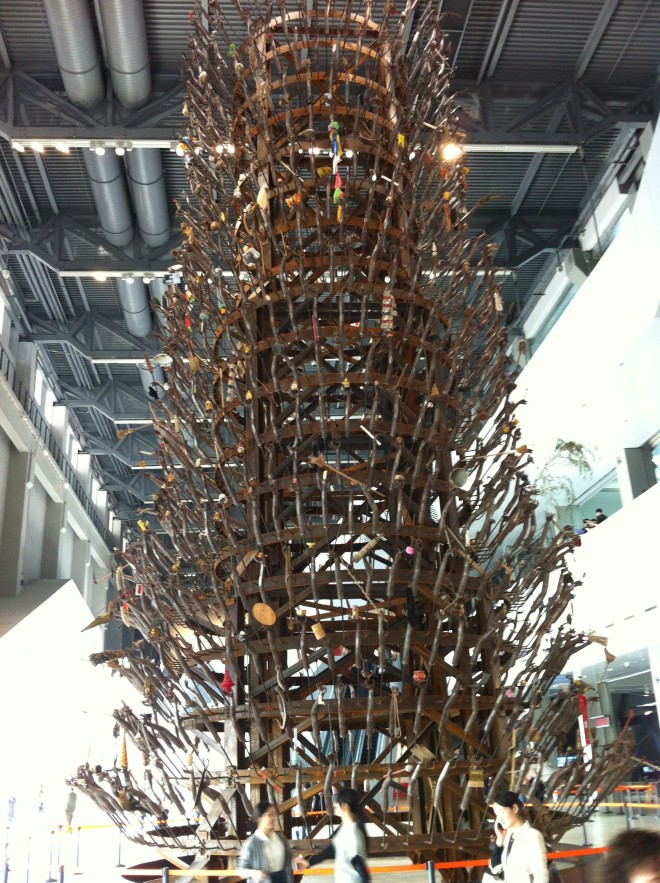 This intriguing sculpture, made with a series of neon strip lights, hung in a very high well which I suspect had been linked to the old chimney somehow. 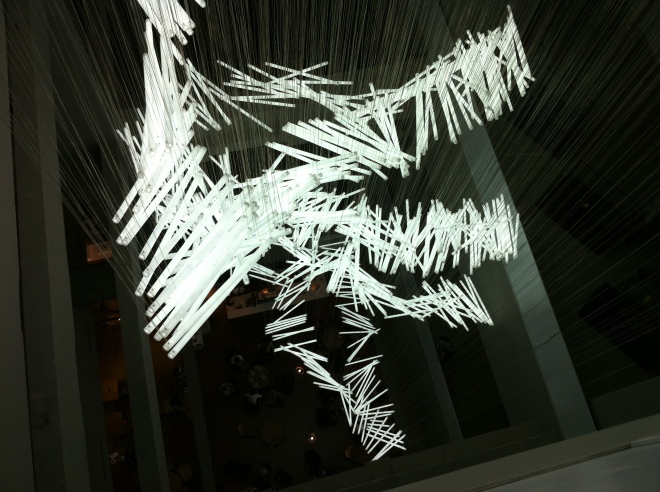 In another stairwell was this series of kites, quite striking. 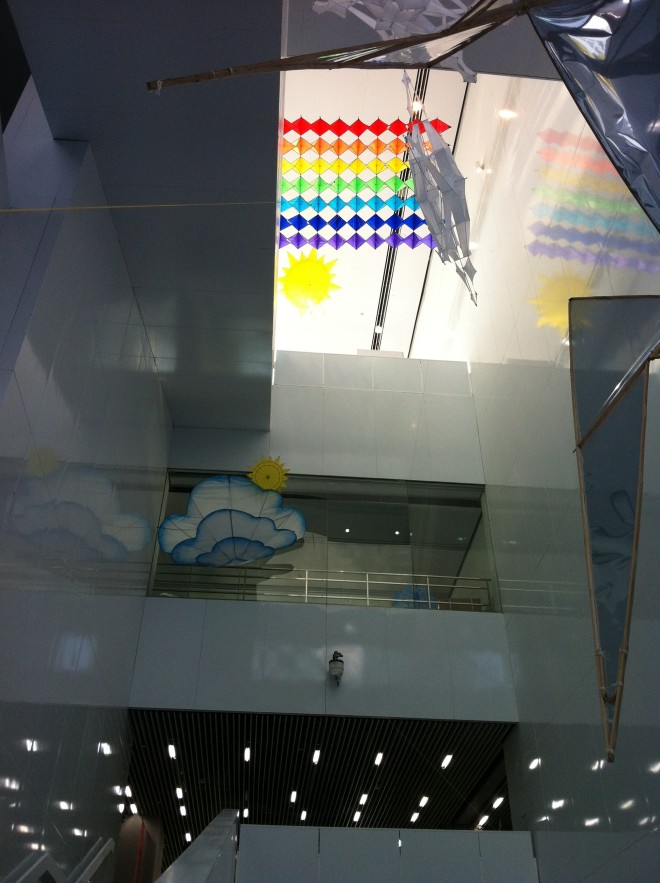 This was a lovely idea, using Chinese pots to make a very high totem pole, using the high ceilings of the generator room to maximum effect.

A smaller version has been placed on the museum’s huge terrace, which by the way has a great view over the river and Pudong. My wife and I are thinking of doing an even smaller version in our apartment – we had better start collecting the pots. 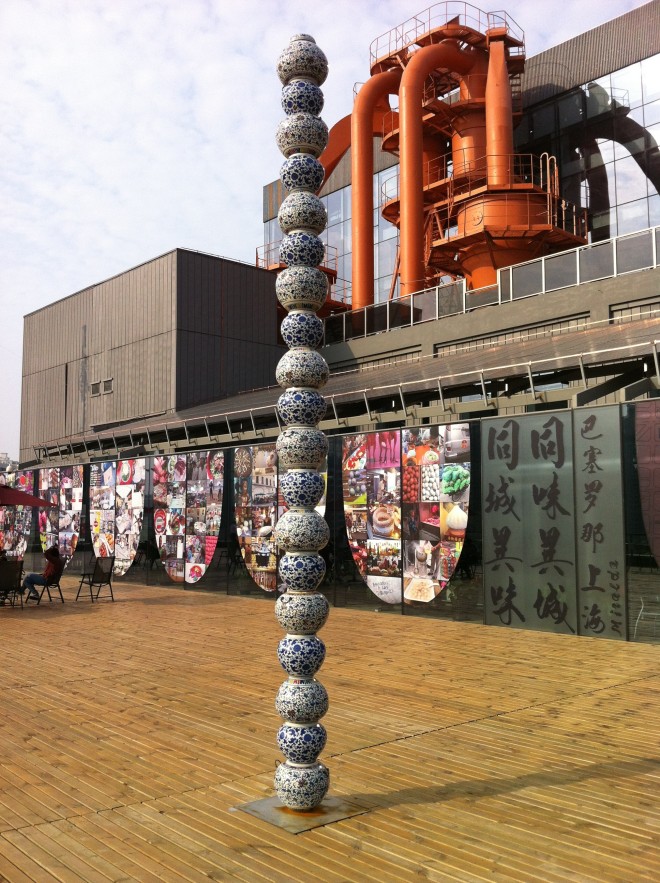 Moving to the smaller scale, here is a great picture from the Italian section of the show (Palermo, to be precise). Using just thick paint the artist has created a nice 3D effect of the sea. 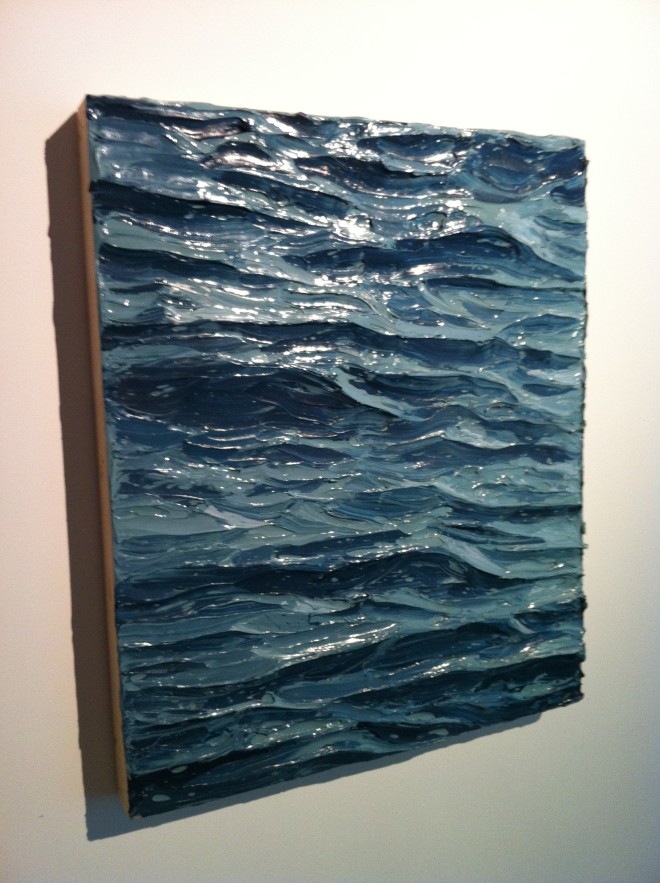 While another of the Italian contingent created this amusing triptych commenting on the Jesuit priests who came to China. 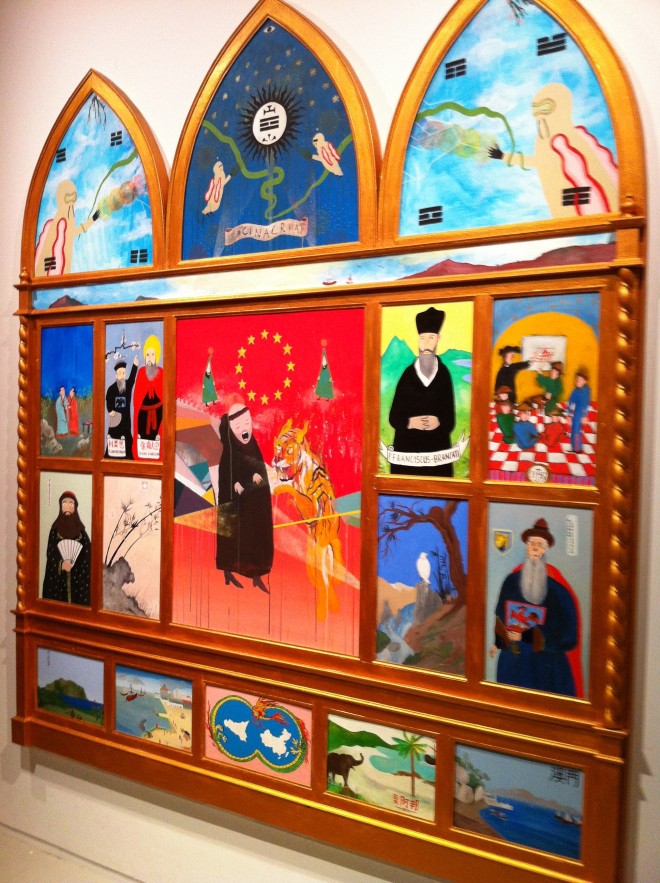 From the Indian (“Mumbai”) section of the show came this piece, made of pressed burlap bags. It had a wonderful “feel” to it. 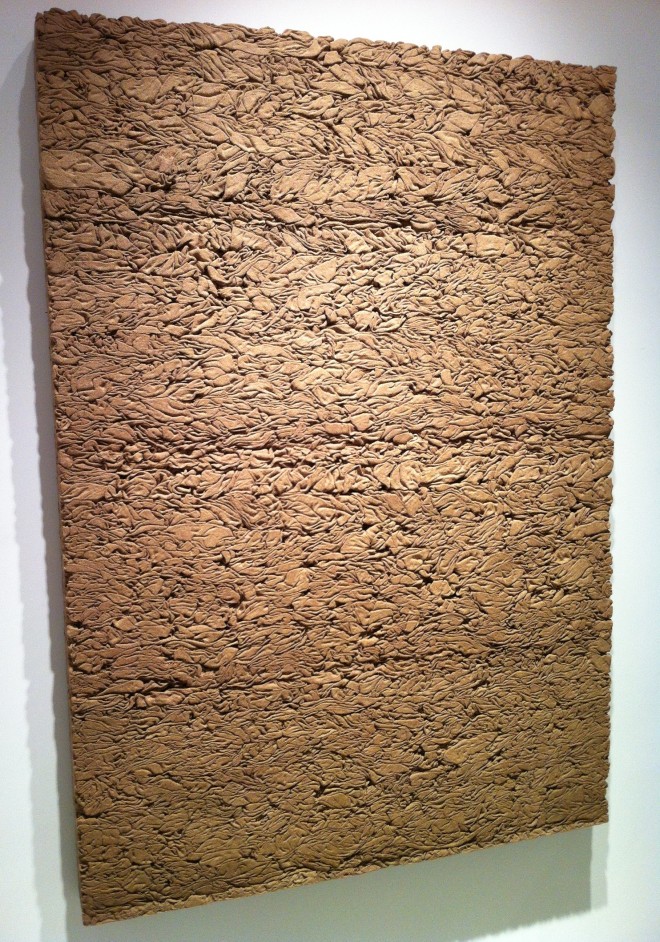 This sculptural piece was by a Japanese artist. I don’t what it is, but it seems so very “Japanese”: maybe it’s the neatness of it, allied to the strict geometry.

And finally, this small piece. It was actually one of a number of such pieces, all with the same subject of Christ on the Cross and all made with bits and pieces. It reminded me of an Italian expression, “povero christo” or “por’ christ’ ” in the dialects of northern Italy, which can be roughly translated as “poor bugger”. 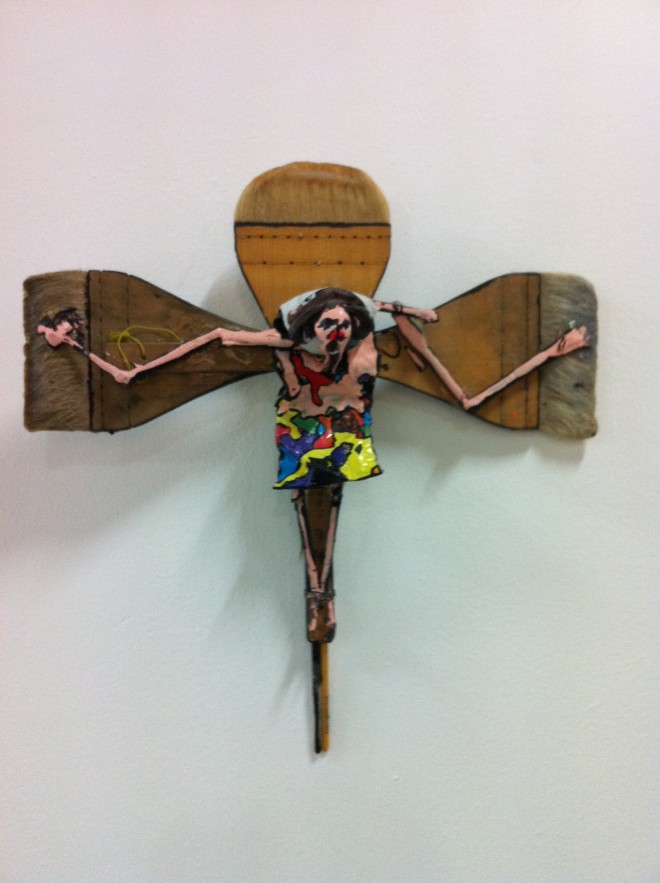 One final note. From the museum’s terrace one could see, in the distance, China’s pavilion at the Expo. 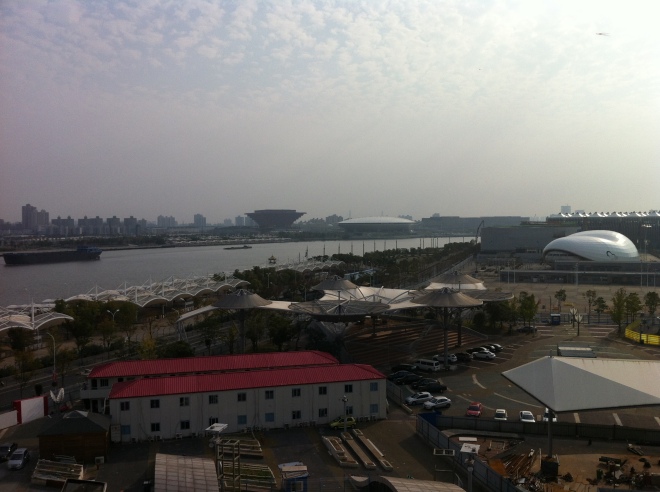 It now houses the China Art Museum. That’s where my next post will come from.