Model builders in China must be very busy people – and very rich. I am referring to the models of new city quarters, new industrial zones, and similar which are being developed all over China. Here are a few examples of what I mean, from the large:

To the more modest: 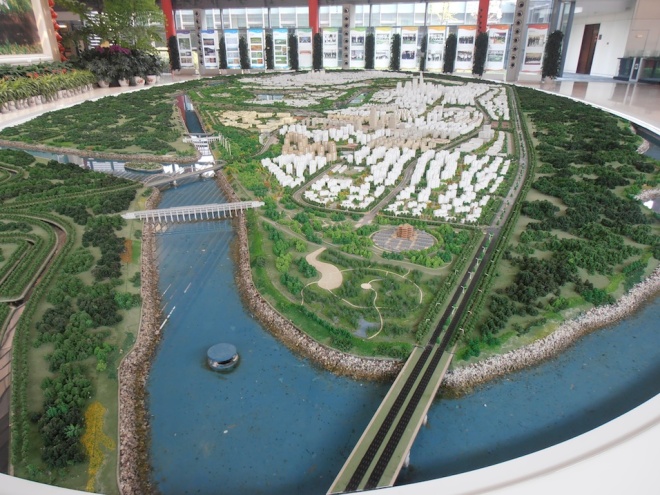 To the very modest:

There must be literally millions of these all around the country – hence my feeling that model making must be a thriving business in China.

I have just come back from Lianyungang, a modest (by Chinese standards) port in the province of Jiangsu, opposite Japan and South Korea. Over the arc of one day, I saw three such models, which went from big, to very big, to huge. The pictures above don’t really give justice to what I saw. The pattern of my visit was always the same. First, I was taken to a temporary building, most times in the middle of a construction site, where an official of some sort was on hand to warmly welcome me. The official, usually with a number of hangers-on, first escorted me down a corridor with photos of various high-level worthies beaming their appreciation about this latest development. Then he brought me to a platform from which I could admire from on high a panoramic view of the model of what was to come in the sea of mud outside. With a flick of a switch, he turned on a son et lumière and I was bombarded with a high-tech video show on the wall of the future to come, with coloured searchlights racing back and forth across the model below me and triumphant voices describing the glories before me. At the end, befuddled by all the loud noise and flashing lights I murmured my appreciation of this vision of the future and everyone beamed. Then we headed for the door and after more warm handshakes I was on my way to the next model and the next son et lumière.

What actually caught my attention was something altogether different. At some moment in my itinerary, I was taken down to the docks to watch the containers being loaded and unloaded by their hundreds. Then the van pulled up in front of this: 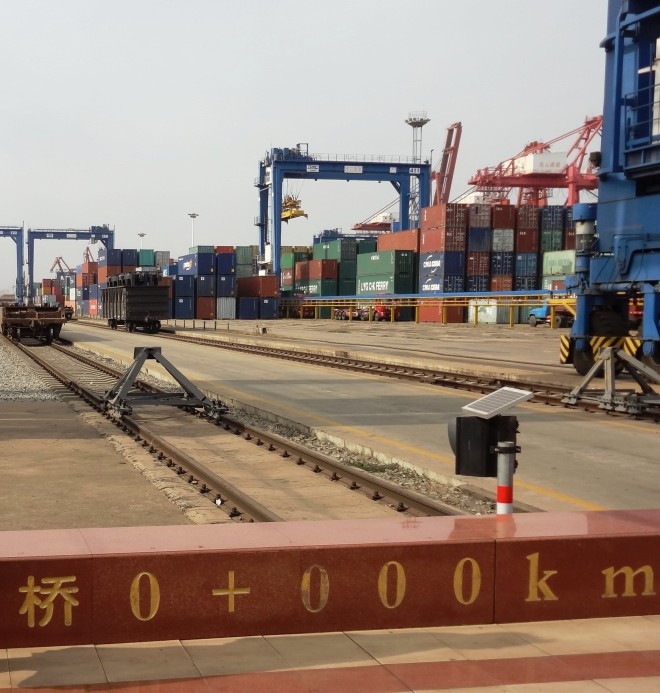 This is point zero for the New Eurasian Land Bridge, or the New Silk Road, a skein of rail lines that will run from Lianyungang across China to the Kazakh border, unreel across Kazakhstan, then after a short skip across southern Russia on through Ukraine, into Poland, then Germany, and finally come to a halt in the Netherlands at the port of Amsterdam. And suddenly in my mind’s eye I’m off along that rail line, with the train wheels clickety-clacking in my ears, whirling across the rice bowl of China all the way to Xi’an, home of the terracotta army, then whooshing along the Hexi corridor of Gansu, hemmed in by the Gobi desert on one side and the Qilian mountains on the other, barreling through the northern reaches of Xinjiang along the far edges of the Taklamakan desert … then suddenly I’m called back to reality. So with a sigh, I move on to the next son et lumière.