I mentioned in a recent posting that I had just come back from a business trip. This was to Dali, in the province of Yunnan, or to give it its full name the Dali Bai Autonomous Prefecture. My first day was spent in the city of Dali, which sits on the southern shore of Lake Erhai. I was there to hold discussions with the local government. I was pleased to be back in Dali, which is a pleasant city, in contrast to most Chinese cities. For one thing, the site is really quite spectacular.

There’s also a nice old city, which hasn’t been swept away by revolution or later by capitalism. It’s been considerably prettified for the tourists, but it’s still a nice place to walk around. I didn’t go there this time, but I had seen it during my last visit to Dali. There are some well-known old pagodas

and nice “old” roads and buildings – with, of course, lots of shops for tourists. 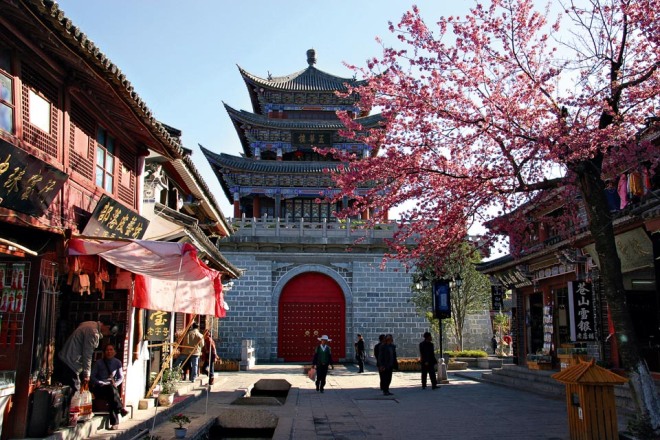 What was really nice this time was that, like in this photo, the fruit trees were in bloom: a sight for sore eyes after cold and dreary Beijing. It will be at least a month, possibly a month and a half, before we see the same thing in Beijing.

Last, but not least, this area of China is one of the few, perhaps the only one, where there is a local tradition of eating cheese! They have always had cow and goat herds here and they routinely drink and eat dairy products. The cheese is a bit odd, and they tend to eat it fried, but it is still cheese.

The local government has a good eye for location. They built the prefecture’s government complex on top of a hill which drops steeply into the lake. So the buildings have a beautiful view of the lake. This is what you see from the car park in front of the buildings. 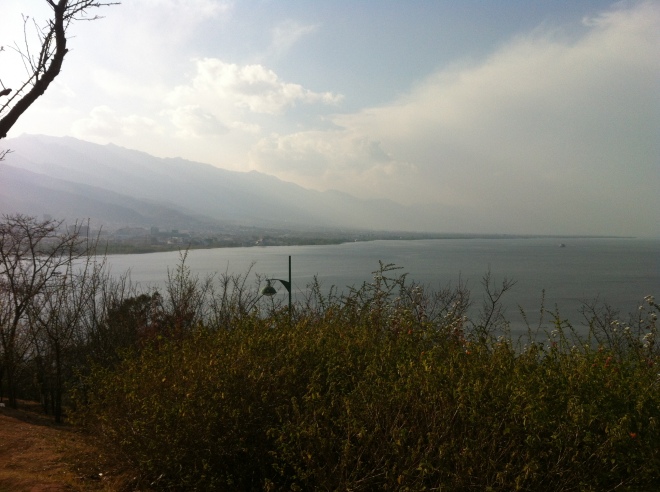 It was the same view I had sitting in the government banquet hall that evening. The hall has been built with a huge window giving onto the lake, and so as I and my host carried on a stilted conversation I could watch the night slowly steal over the lake. 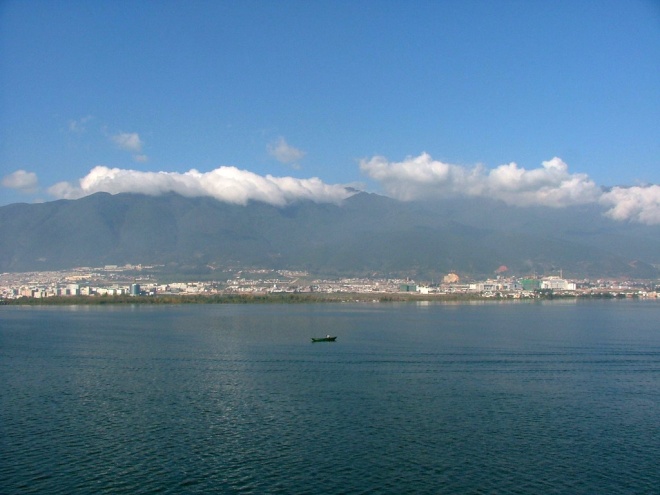 to visit a walnut orchard and a walnut processing facility. From the discussions I had held the previous day and from further explanations I received on the way, I had a handle on the basic problem. The government had encouraged the local farmers to plant walnut trees, as a way to increase their incomes but also to reforest the prefecture’s hills.

Now, as more and more trees reached maturity – it takes about ten years for a tree to produce walnuts – the government realized they had to find something to do with all the walnuts which were about to flood on the market and depress prices. They were asking our help to find markets outside China.

To reach the walnut orchard, we climbed up, up, up the steep hills enclosing the valley, through one switchback after another. When we reached the top, I gazed around me and was terribly reminded of Liguria in Italy. I was seeing walnut trees rather than olive trees, and instead of the glint of the Mediterranean Sea far down below me I was seeing rich valley bottomland planted in vegetables. But the feel was very much the same, the feeling of being perched on an edge and risking to tumble down at any moment.

After a few moments, Farmer Liu arrived. He immediately opened a red packet of cigarettes – still the official sign of welcome in rural China – and offered a cigarette to all and sundry. I felt rather bad for him that all us city slickers, Chinese included, politely refused. Before coming, and knowing roughly what the Dali authorities wanted to talk to me about, I had phoned a colleague who knew about walnuts and had him coach me. So I was now able to pepper Farmer Liu with some not-too-stupid questions and understand his answers. After some ten minutes of this, Farmer Liu invited us to enter a small show room where we sat down and ate some of his walnuts. I was struck by how much more pitted the walnut shells were, almost as if they had been dunked in acid 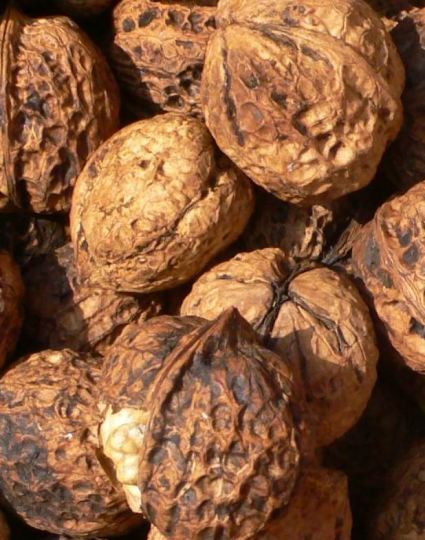 I think this will be a problem outside of China, where people are used to relatively smooth shells. But the flesh was delicious. 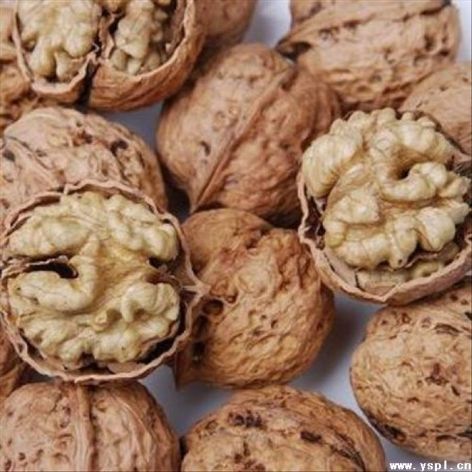 As I ate, I looked around at the various products on show, wondering which of these could find larger markets if suitably produced. I mentally nixed this product made from sliced walnut shells. 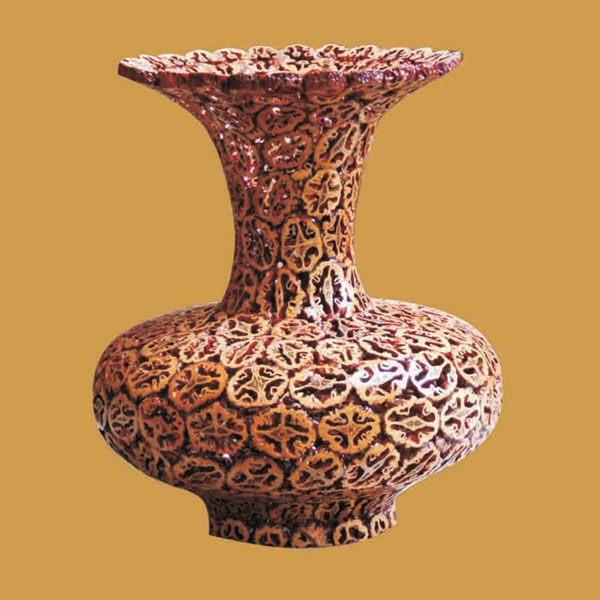 Possible, although it can’t be used for cooking, which would be the big market; when heated it takes on a slightly bitter taste. It can be used in cosmetics, though, which could be a good market 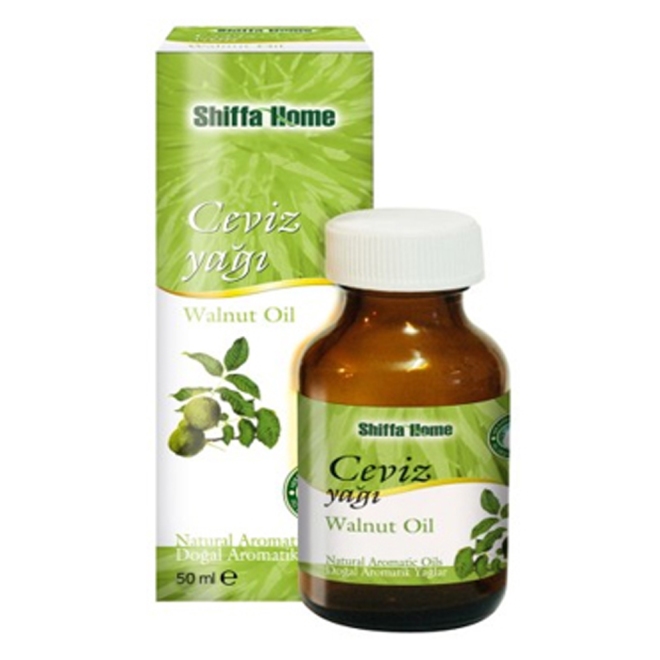 or in suntanning agents

There’s also walnut milk, which – like almond milk – is really a mix of very finely ground walnut and water.

Maybe this should be left to the national market. It’s becoming increasingly popular here, and I’m not sure how easily exportable it is.

How about walnut butter, cousin to the better-known peanut butter? 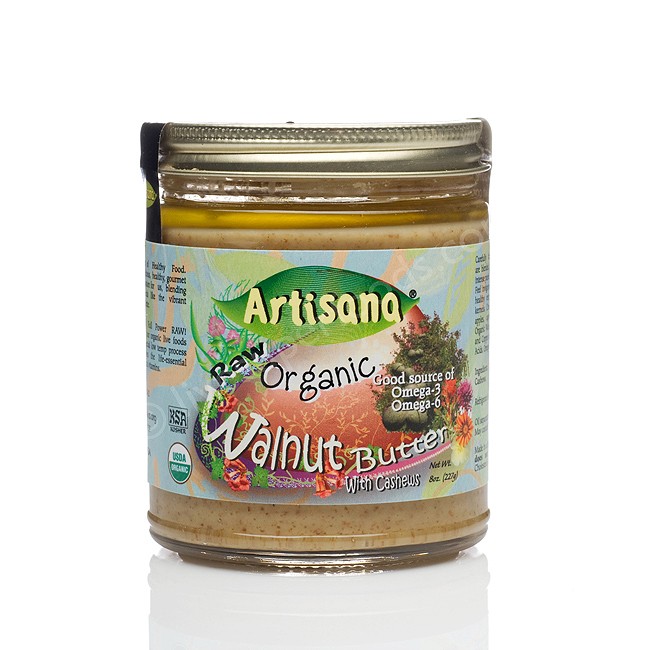 And so my eyes wandered around the shelves, while my hand dipped the walnut pieces into a delicious honey dip. The honey was creamy thick and pale yellow, really, really lovely. And then my mind began to wander, as I sat there enjoying the spring sun and the blossoming fruit trees outside the showroom.

2 thoughts on “WALNUTS IN DALI”