A few days ago, my wife was showing me a website she had discovered: “Before They Pass Away”. It’s a wonderful site, kept by the photographer Jimmy Nelson, who has travelled to many of the remoter parts of the world to document the world’s vanishing tribes. I really recommend my readers to visit it.

As I was studying his photographs of the Kalam tribe in Papua New Guinea, I was thunderstruck by the absolutely wonderful headgear they are wearing: 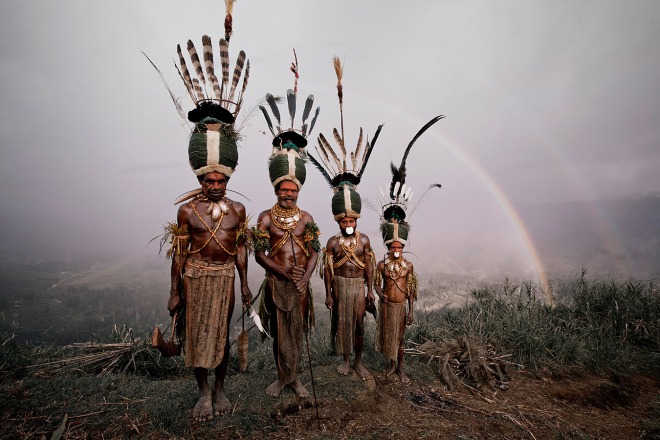 It rather reminds me of a headgear I’ve referred to in an earlier post, being worn by a donor depicted in a 14th century mosaic in the Kariye camii church in Istanbul:

but the Kalam tribesmen’s headgear is much, much more magnificent! For a crazy moment, I imagined myself wearing such a headgear to the office. Boy, would I look impressive! But quickly, though reluctantly, I dismissed the idea because (a) I would have difficulty passing through the doors, and (b) my staff would conclude that I had definitively lost my marbles.

This train of thought led me to start reflecting on the wearing of hats. Because I could wear a hat to the office. Hats fit through doors and my staff wouldn’t think it’s time to call in the men in white if I wore one. Yes, I could easily be a smooth operator like Humphrey Bogart (“Here’s lookin’ at you, kid”) 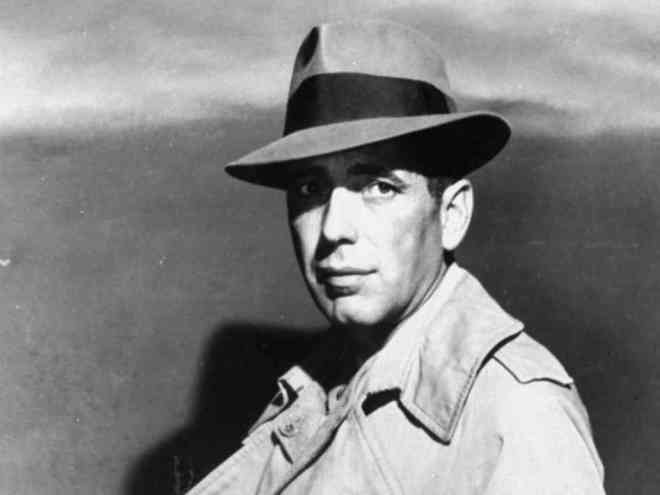 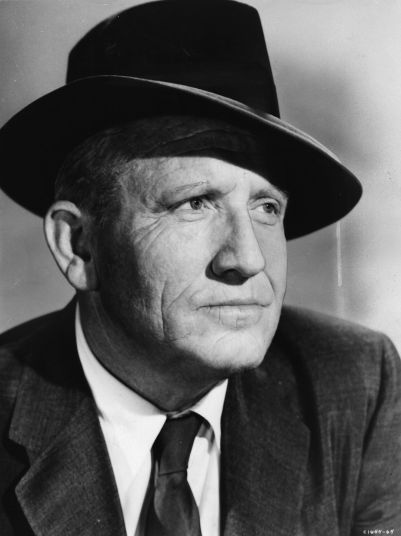 or a little closer to home and in time, Jean-Paul Belmondo and Alain Delon

I would definitely avoid the top hat, which is really too formal 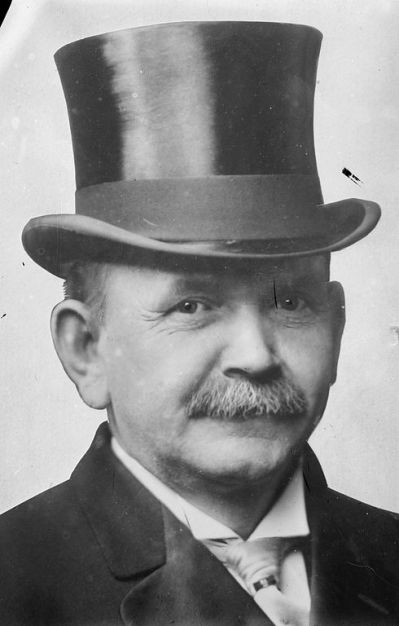 or the boater, which is really too silly, as Bertie Wooster amply demonstrates (played here masterfully by Hugh Laurie to Stephen Fry’s Jeeves)

or the bowler hat, which is really too English 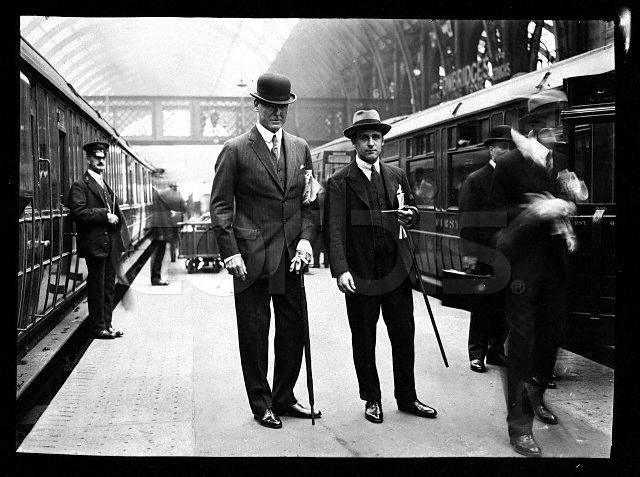 although one could argue that the 1960s TV show The Avengers gave the bowler hat and attendant umbrella a certain air of glamour.

I was certainly moonstruck when I was young by la belle Diana Riggs.

But the fact is, I wouldn’t even wear the more normal of these hats to the office. I mean, who wears a hat any more? And that’s really rather extraordinary, because there was a time – before my time, I will admit, but still not that long ago – when no man in the Western world ever went out on the street without a hat on his head. Look at this picture, taken during some demonstration in New York in the early 1900s. There isn’t a single uncovered head. 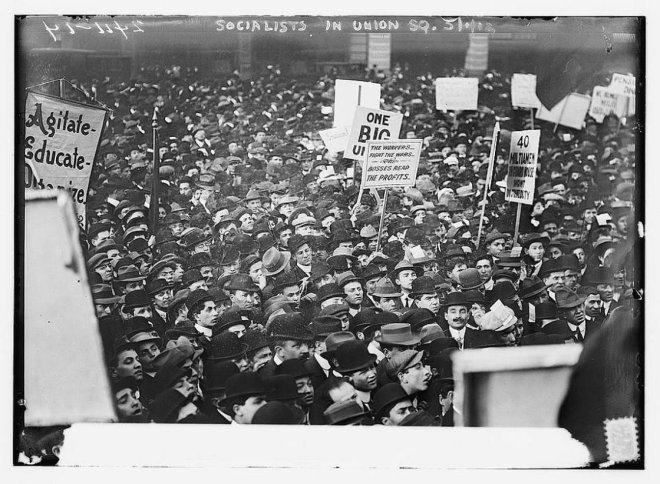 And that was how things were until at least the 1940s and even into the 1950s. Then suddenly, hats disappeared.

Many theories have been put forward for this sudden eclipse of the hat: the rapid rise of the car culture (hard to wear a hat in a car); a reaction to having had to wear helmets and other hats as soldiers during the War; a general trend towards nonconformity (wearing hats was what the older generation did, ergo …); changes in hair styles: from the short-back-and-sides to Elvis quiffs in the 1950s and long hair in the 1960s (hard to wear hats on that); trends towards more casual clothing (hats being seen as a formal piece of clothing), etc. Take your pick.

My father would have been of the generation that abandoned hats. And in fact, I don’t remember seeing a single photo of him wearing a hat, nor do I ever remember seeing him wear a hat. Except once. In London. In the early 1960s, when I started going to boarding school. I have a distinct memory of him striding ahead of me, dressed like a city gent 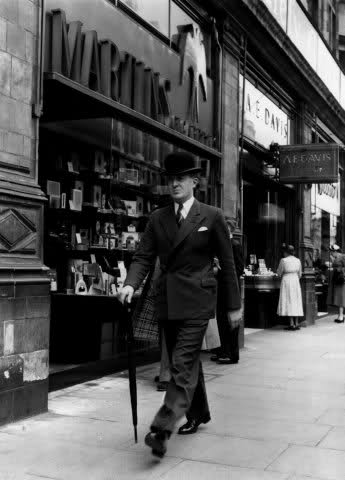 while I trailed behind wearing my ill-fitting school uniform – a hand-me-down from my elder brother – and sporting the only hat I’ve ever worn, if it can be called a hat, the school cap. I looked something like this youngster

although, at the age of 8, I was 4 years older than this little chappie.

In the meantime, regular hat-wearing has become the preserve of the religiously inclined, from Roman Catholic clergy

to Orthodox, Conservative Jews, here seen in their Sabbath finest

But I’m sure the hat will come back. All things go round. The current crop of film stars is now being photographed looking glamorously unshaven and wearing some form of hat 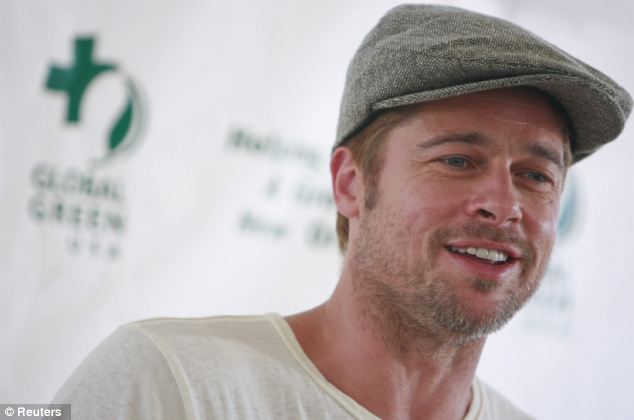 a good sign that the fashion of hat-wearing is on the way back. But will hats come back before I too, like the Kalam tribesmen, pass away?