Our trip to Indonesia to celebrate my wife’s birthday started with a bang – literally. Two days before we were leaving, Mt. Kelud erupted

covering a good portion of Central Java with a fine layer of ash.

My wife and I were stunned. This was where we were meant to be going! Our plan was to visit the Buddhist temple Borobudur, a UNESCO World Heritage site

and other old temples dotting the landscape north of Yogyakarta. From the moment we heard about the eruption to the minute our flight took off from Beijing for Jakarta, we anxiously scanned the net for the latest news. Our immediate concern was the onward flight to Yogyakarta. We read that the airport there, along with two other airports in the region, had been closed because of the ash-fall. 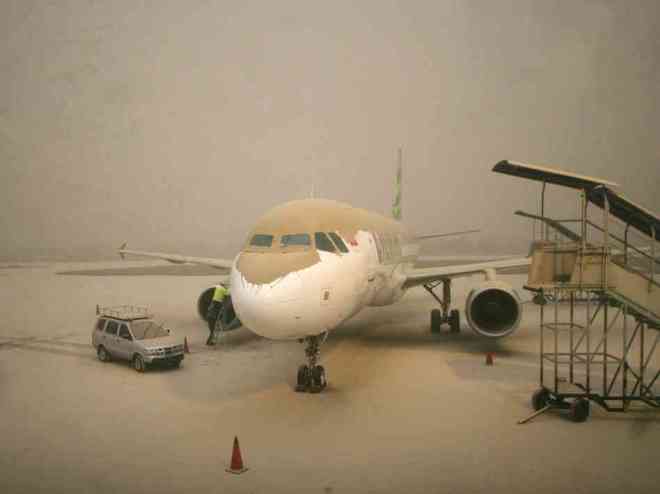 But surely, we said to each other, the airport will be open by the time we arrive in Jakarta. Surely it will.

It was not. In fact, ground staff at Jakarta told us that it would be a couple of days before they could clear the ash enough for it to reopen. The only way to get to Yogyakarta was by rail (7 hours) or by road (15 hours). We were marooned …

Luckily, though, one of the ground staff mentioned that Semarang’s airport had been re-opened. It had also suffered from ash-fall, but they had managed to clean it up quite quickly. We had only the haziest notion of where Semarang was but if the ground staff thought it was a good alternative that was good enough for us. We got the ticket changed to a flight to Semarang which left very early the next morning. Since the thought of spending the night at Jakarta airport didn’t appeal, we also put ourselves down on the waiting list for a flight leaving that evening for Semarang. We were warned that there was very, very little chance, but in the end we got on the flight and there were still free seats behind us. The local guide who was meant to pick us up at Yogyakarta recommended a hotel in Semarang, and we agreed with him that he would come to get us there the next day.

So, by the afternoon, but 24 hours late, we were sitting on the terrace of our hotel, on chairs and at a table which had been vigorously scrubbed to get rid of the insidious volcanic ash, sipping a ginger-lemon grass welcoming drink, and looking over at Borobodur temple faintly picked out on the horizon, framed by trees whose leaves were all still thickly covered in ash. 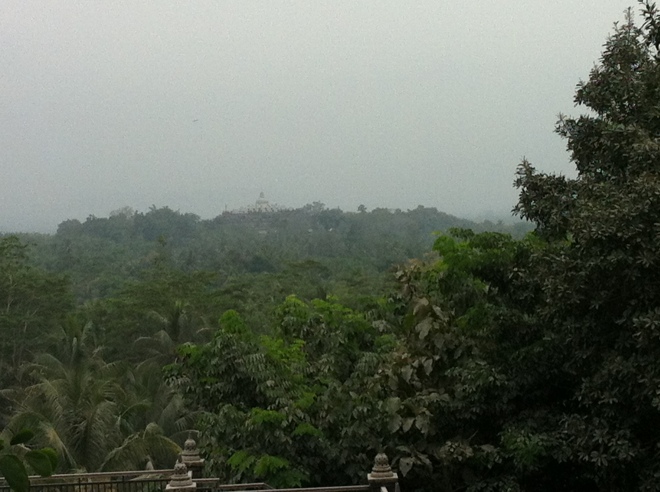 The hazards of travel … although this is the first time for us that a volcano has got in the way.

Surely Yogyakarta airport will be open again by the time we leave. Surely it will.

PS: It was. I am posting this from the comfort of my dining room table in Beijing, where we got in this morning.