My wife and I were on Oxford Street yesterday, where she did one of her favorite things, namely she entered a shoe shop to inspect its contents. In this case, the inspection led to her purchasing two pairs of moccasins. Flushed with this success, she emerged from the shop wearing one of her purchases. After a few hours of further walking around London, the inevitable happened. My wife’s face started taking on a strained look, and she eventually confessed to sore feet. The new shoes, she announced, needed breaking in. I then suggested, in a moment of flippancy, that she should find someone to break in her shoes for her. She waved this off as the flippant suggestion that it was.

And yet … it was not so foolish a suggestion. I, for one, had done exactly this at school. I had broken in a pair of shoes for someone else. Boots, actually.

It was June 1972. My classmates and I had just finished taking our A-levels and we were about to leave school for good. A bunch of us got together and decided to celebrate this rite of passage by crossing the Yorkshire moors (which lay just to the north of our school) from one side to the other, all in one go. This may not sound like much, but actually it was a bit of bravado. We’re talking of a distance of some 60 kilometers, so to do it in one go meant starting at 3 in the morning with the hope of finishing in the late afternoon. I realize now that what we did was the Lyke Wake Walk or some variant of it. This walk runs from the village of Osmotherley, which lies on the western edges of the moors, all the way to the sea which laps at the moors’ eastern border. We started feverish preparations, which brings us to the topic of boots and their breaking-in. I suddenly realized that I had no adequate footgear. Gym shoes were far too light (the heavy running shoes of today did not yet exist), but I didn’t want to buy a pair of walking boots just for this. At the last moment, the younger brother of one of the walking team offered to lend me his brand new boots. By using them I would be doing him the favour of breaking them in. Damned good deal, I thought.

So at 3 am of a Saturday morning, we were dropped off from an old army truck, me in my brand-new borrowed boots, with the escarpment of the moors looming up in front of us in the darkness. Feeling a bit like a bunch of commandos on a special mission to knock out the enemy’s gun positions, we quietly filed up the path which carried us to the top of the escarpment and then started walking across the heather. And we walked.

The sky slowly lightened up until we could see around us. It was really very beautiful, bleak perhaps, certainly remote, but beautiful.

We stopped for breakfast, munching on some sandwiches we had brought with us. A squall swept through, luckily the only one of the day. After which we started walking again, with stunning views around us 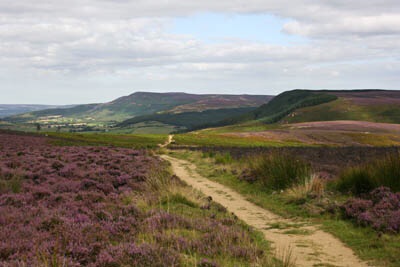 And we walked. And walked. The sun in the meantime slowly climbed to its zenith, the clouds clearing away and leaving a beautiful sunny day in their wake.

At lunchtime, we reached a road on which the old army truck was parked, waiting for us. As we each trudged in, we clustered around the truck and took the food and drink being handed out. We sank down on the heather, glad to have an excuse to rest our aching legs a while. Eventually, though, we had to lever ourselves back on to our feet and walk on. And so we walked. And walked. 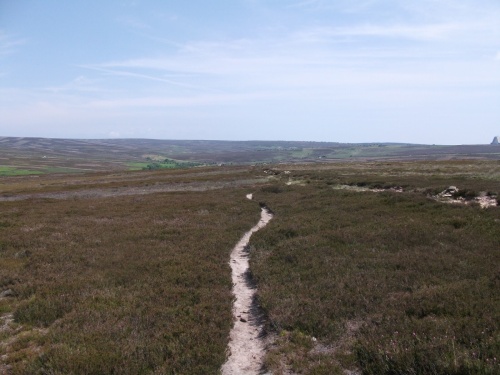 An hour or so later we reached Fylingdales, those strange “golf balls” in the middle of the moors, which are actually part of an RAF radar station.

We stopped a moment, with the excuse to admire the balls but really just to be able to stop walking for a bit. But we soon had to push on. The earlier joshing and joking had died away hours ago. We now just walked, oblivious to the beauty around us

By this point, the new, being broken-in boots were hurting me so much that I took them off and walked barefoot. How much further, dear God? How much further? My friends began to stumble past me as I shuffled on slower and slower, and they weaved off unsteadily ahead of me through the heather. At last, at last, I crested a rise and there, down on the road, was the old army truck. Thank God, thank God, and thank God!! Still after all these years, I can remember with perfect clarity the exhausted joy of sighting that truck. I sank down in the heather beside it and promptly fell asleep.

And the next day, after I had crawled stiffly out of bed and had had some breakfast, I solemnly handed over the boots to their owner, who was very pleased by the impeccably thorough breaking-in I had given them.

So all of this to say that I’m sure my wife could find a penniless student who would break in her shoes for her, for a price.