We were up in the north of Thailand two weekends ago, very close to the border with Myanmar, up in the high hills (or low mountains?) behind the town of Mae Hong Son. Lovely, really lovely … We stayed in the small village of Mok Cham Pae, perched on a hillside overlooking a small river and its bottom lands. In the UK they would have been turned into hay meadows. Here, they had become a patchwork of rice paddies. 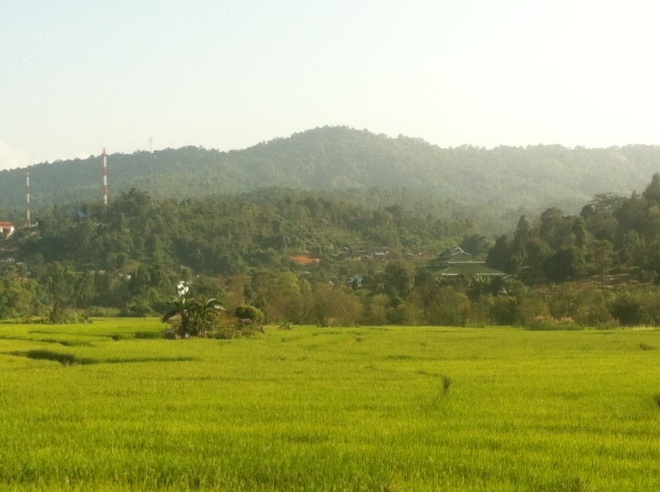 Around Mae Hong Son, the rice was already ripening. But up in Mok Cham Pae it was relatively cooler, so the rice was still green, that intense green which you only get with rice paddies. 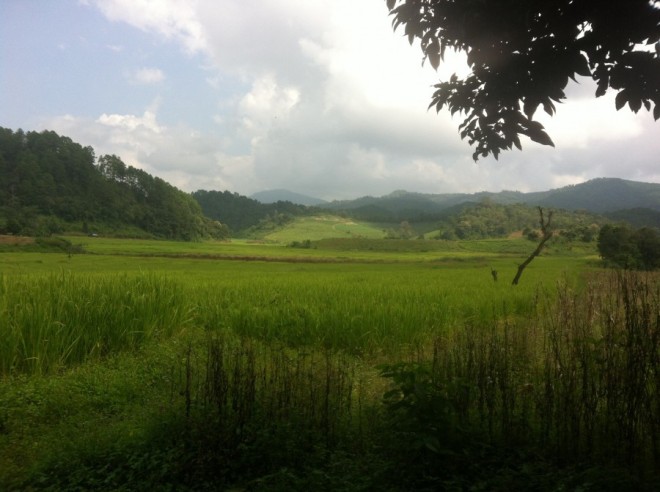 But rice paddies, for all their beauty, are a monoculture, where all other species are kept at bay. After walking around the edge of the paddy fields, seeing only some banana trees marking the edge of “rice country” 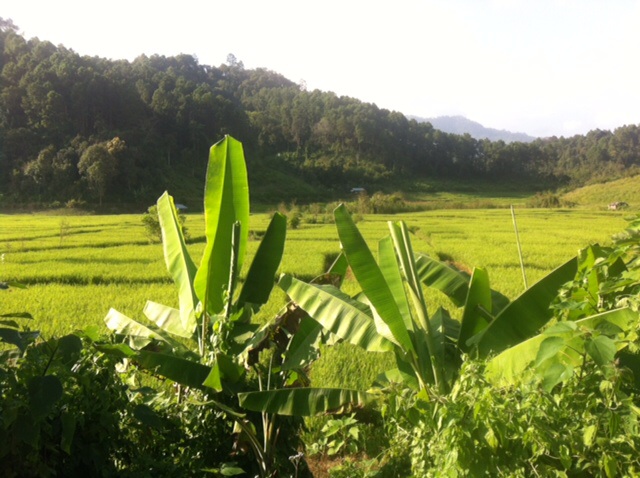 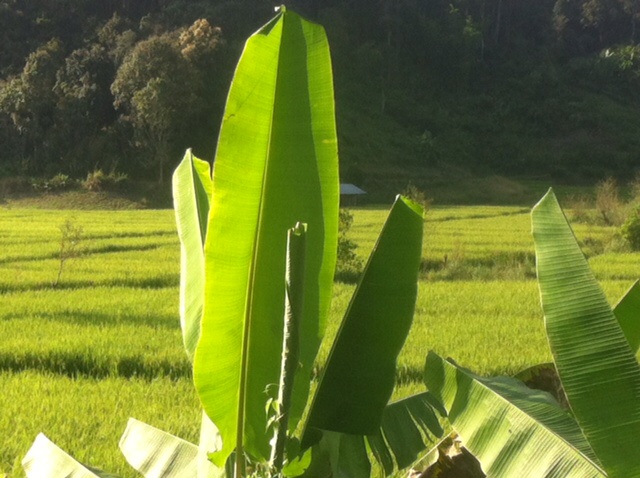 and some very smelly pigs (which turned out to be owned by our hostess), we ventured out along a dirt road which wound its way up the river valley. 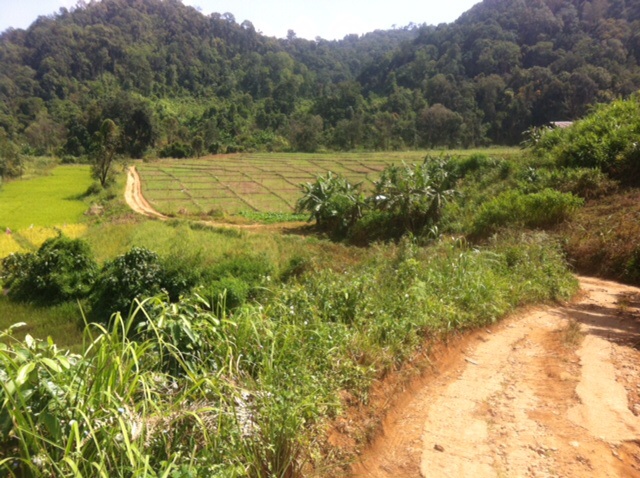 The paddies narrowed down to a strip along the water, for a while vegetables took their place, and then finally what was left of the forest straggled down to the road’s edge. 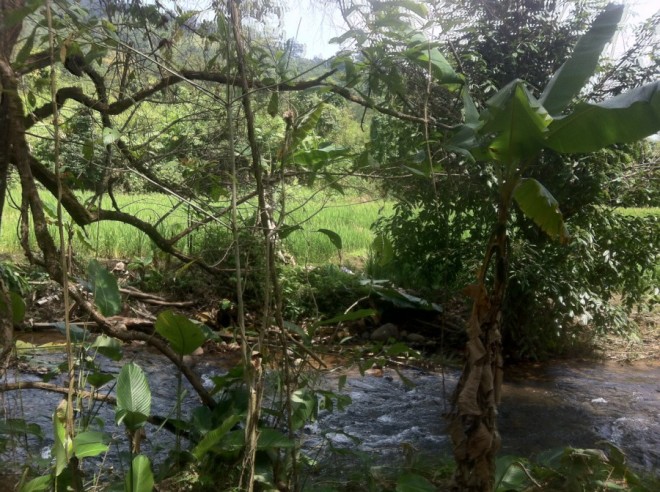 We saw no elephants browsing in the forest, or tigers moving in for the kill (my memories of Rudyard Kipling’s Mowgli are getting the better of me). But what we did see in profusion were butterflies, fluttering in and out of the bedraggled forest, chasing each other around, or settling on the road close to water. On that walk, which was no more than two hours long, I swear we saw at least 20 different species of butterfly. In Europe now, you’re lucky if you see three different species in a whole day. There were never that many species to begin with, and intensive ploughing, pesticides, and the tearing up of hedgerows have put paid to the few there were. I’ve had a look at various web sites dedicated to Thai butterflies to identify the ones we saw, but it’s hopeless. Did we see a Common Grass Yellow or a Tree Yellow? Was that one by the bush a Gram Blue or a Plains Cupid? Or maybe a Forget-me-not?? In the end, who cares? They were just lovely. I invite readers to visit the following flickr site to get a taste of what awaits you in this part of the world, butterfly-wise.

And I choose just two to represent the class 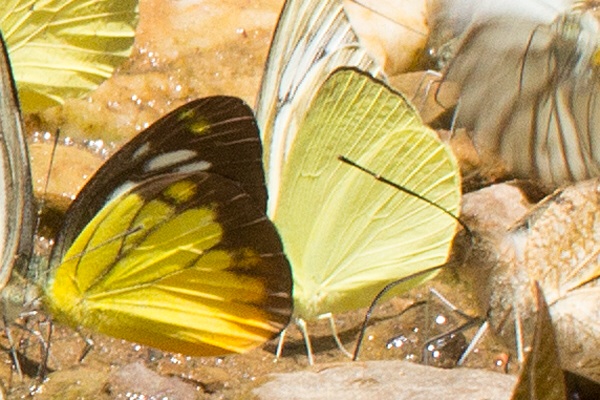 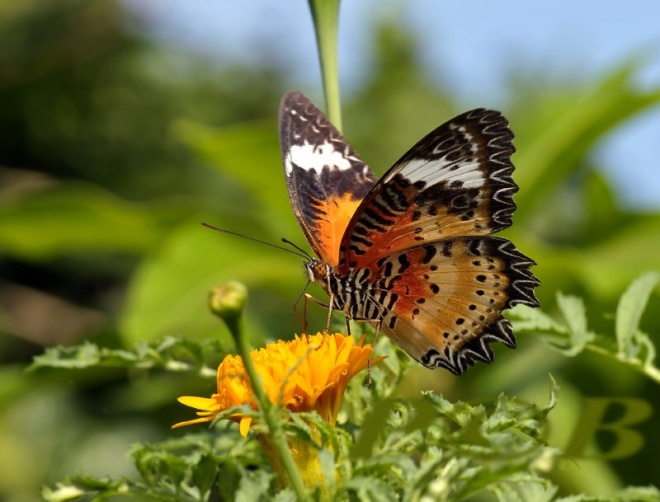 I chose these two very deliberately, because they each bring back to me two distinct butterfly-related memories.

The first is from Mexico. It was some 35 years ago, my wife and I – and mother-in-law – were travelling around the country. We mostly took buses and the occasional train. But in Yucatan, we decided to hire a car. We got a Volkswagen beetle – I remember it well, they had recently been phased out in Europe – and drove from one Mayan temple to the next. And along the road we drove through these clouds, these drifts, of green-yellow butterflies. I was in agony at the butterfly holocaust I was causing, but what could I do? They were just sitting there on the road, sunning themselves.

I feel particularly bad about killing butterflies because – and this brings us to the second photo – I have a very vivid memory of when I was a child – six years old, I would guess – in our garden in Africa. It was full of butterflies, and like all children I liked chasing them. But this time, one, of about the color in the photo, had settled on the ground and was sunning itself. I crouched down, picked it up, and slowly – pulled – its – wings – off. Yes, I did that. Even as I write about it, I feel a strong sense of guilt at such a casual act of gratuitous cruelty. Perhaps the rest of my life as an environmental engineer has been an act of atonement for it.

all other photos: ours