I think it must be a scientific law that the closer you get to the equator, the more species you will find per square metre (or foot, if you wish) looking for their space in the sun. All that steamy heat seems to lead to a sustained biological ebullience. Certainly, in a totally unscientific survey, my wife and I have agreed that the number of species wishing to share with us our hot and steamy Bangkok apartment is considerably higher than it was in Beijing. There, over a period of five years, we catalogued a few, relatively small, cockroaches making a frantic getaway over the floor and that was it (although the rare cockroach sighting led to apoplectic calls to the front desk and demands for a thorough chemical spraying). Here, in just one month and a bit, we have seen:

– A little lizard, very pale, almost albino, which we first sighted peeping out from under the dining table, then from behind a column that we have in the living room, then in the cupboard under the kitchen sink. He looked very similar to this little fellow. 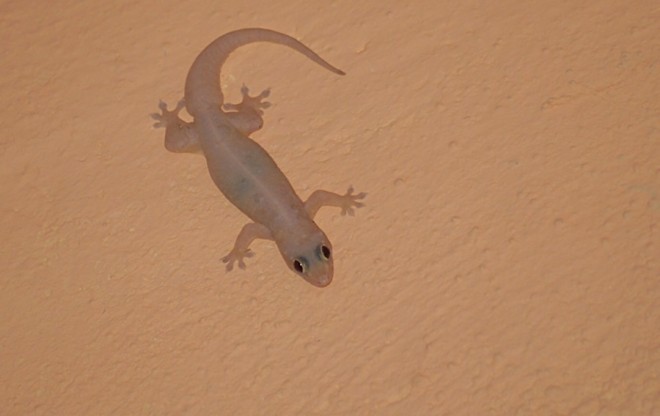 I have had a soft spot for lizards ever since I used to chase them as a boy across the walls of my grandmother’s garden in France, so I was pleased to see it. But my wife is not a lizardophile and demanded that I get rid of it. I rather reluctantly chased it around a bit and was secretly pleased when it disappeared of its own accord.
– A horribly large cockroach, which luckily was flat on its scaly back, dead, in the shower. But I have seen them horribly alive, skittering ahead of me across the pavements, always in the darker corners of the neighborhood. Disgusting creatures, I refuse to grace them with a picture ….
– A number of wonderfully large moths, which flutter in at night from out over the river and settle down for a rest. They are really beautiful, nothing like the dreary little things we have in Europe, so I’d be pleased to share my living space with them.

But my wife is having none of it, so with a sigh I shoo them out, using the pasta drainer to catch them and carry them out.
– Several species of bird which use the balcony railing as a favorite stopping place. There are those pesky pigeons which crowd our squares in Europe. But there has also been a beautiful bird, which I think is also a type of pigeon although my wife disagrees. 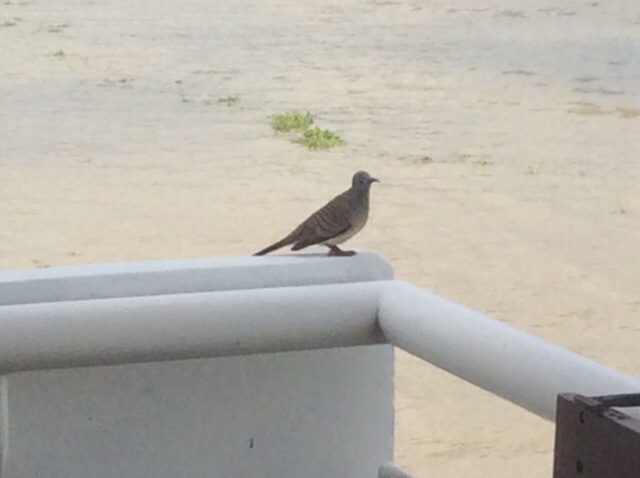 Cheeky little sparrows also hop on and off the railings, beadily eyeing any crumbs which might have fallen off the table that we carry out onto the balcony for breakfast, lunch and dinner.
– swallows, which my wife says she found early one morning twittering around on the living room parquet (we had left the windows open). Imagine that! I see them dive and swoop over the river

as I have seen them dive and swoop over summer fields in Europe. But I have never seen them stand still.

All this in the few square meters (or feet, if you wish) of our apartment. Expanding out a little, we’ve seen beautiful little birds, black with white tufts on their wings, fluttering silently on and off the clumps of water hyacinth which drift past us on the river. They have recently been joined by a lovely white egret.

And then there’s the Asian koel bird which I’ve mentioned before. I keep on hearing it, but I’ve never managed to see it. In the dirty, oh so very dirty, canal which runs behind the office, I’ve seen what I think is a monitor lizard swimming lazily (or sickly?) in the watery gook: the water is greyer than in this photo. 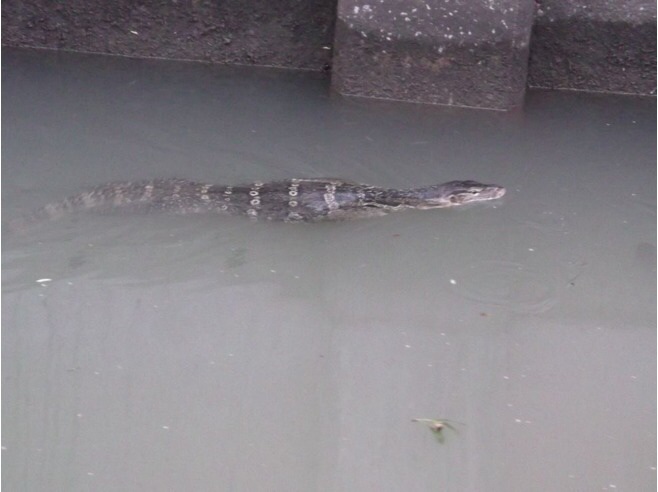 The same canal teams with fish, which some enterprising (or mad?) people fish from time to time. And we have a couple of next-door fishermen who put out their nets in the river while we are having breakfast, well out of the way of the busy river traffic. I’ve sometimes caught a gleam of silvery scales in the bottom of their shallow little boats.

But I presume that the number of species we can stumble across in the concrete jungle of Bangkok would be nothing compared to what is present in the real jungle – or what is left of it in Thailand. That pleasure awaits us still.