Every morning, when my wife and I have breakfast on the balcony, I am faced with this.

“This” is Rama VII Bridge, which crosses the Chao Phraya River, linking Thonburi with the more central parts of Bangkok. It was opened in 2002.

I don’t like this bridge. I don’t exactly know why. After discussions with my wife, I have come to the conclusion that I find the number of cables excessive, the colour scheme – sickly yellow on grey concrete – quite off-putting, and that conical thing on top of the bridge’s single pylon – seemingly a lotus bud – faintly ridiculous.

My meditations on what I didn’t like about the bridge led me to ask myself what I did like in bridges. After surfing through any number of sites claiming to list the 10, or 20, or 30, most beautiful bridges in the world, I have concluded that what gets me going in a bridge’s design is the play between simple geometric forms. Not any forms, mind you: the circle – or rather the semicircle – and its interplay with the line, preferably curved, is the best. And balance is required.

Let me start with the semicircle and shallow triangle

(Please excuse my rather basic sketches. I’m not an expert in the use of Paint)

But this bridge, the Ponte della Maddalena in Italy, is a near second. 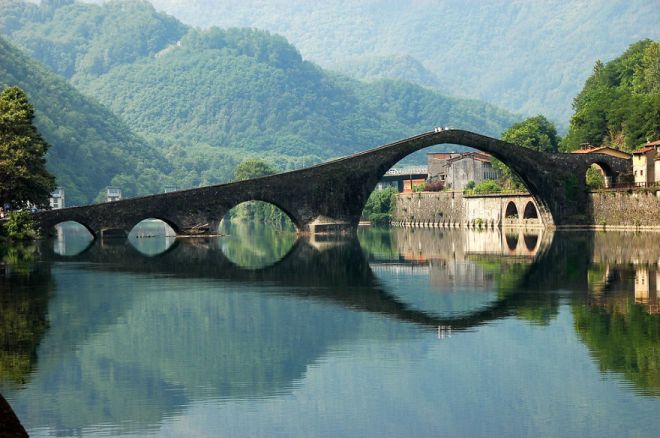 I particularly like the three little skips which the bridge makes before it makes the final jump across the river. And it’s a real bridge, built to bring people and their goods and animals from one side to the other, rather than the Rackotz Brücke, which was just built for show.

I really feel I should add a picture of the Mostar Bridge.

It looks a bit heavy, especially because of the building accretions on either end. But the bridge itself is a very nice example of the semi-circle-plus-triangle genre, and the white stone it is made of is really lovely. It’s also highly symbolic of the wars in ex-Yugoslavia. The bridge is in what is now the country of Bosnia-Herzegovina. During the wars, it was fought over repeatedly, and this beautiful bridge was among the many old buildings in the city which were destroyed. After the wars, it was rebuilt exactly as it has been, a triumph of hope over hate.

The Chinese also liked to build such bridges. They call them moon bridges. This one, the Jade Belt Bridge in the Summer Palace Park in Beijing, must be the best-known of this type. 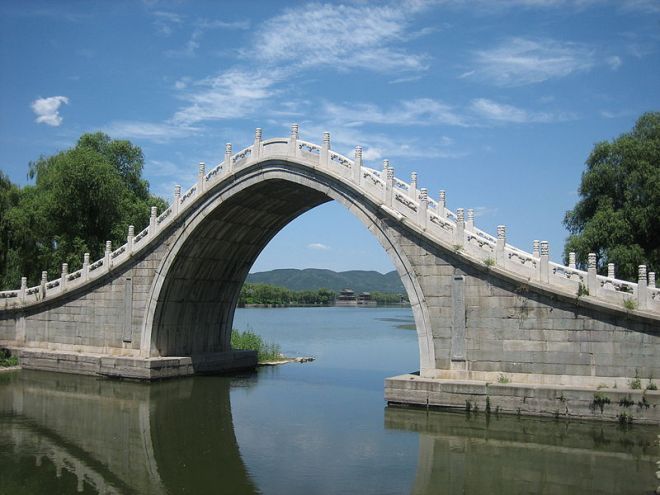 But like the Rakotz Brücke it’s just for show. I prefer this bridge, the Liija Bridge, thrown over a canal in Jiangsu province, because it is a real working bridge – or at least it was.

Alas, in this day and age where the car reigns supreme over our roads, humped bridges like these are not “user friendly”. That curved line needs to be straightened so that cars can cross without a second thought.

A very pretty bridge in this class, opened in 1932, is Bixby Creek Bridge on California State Road 1 through the Big Sur, although the semicircle has become a parabola, no doubt to make the bridge stronger. 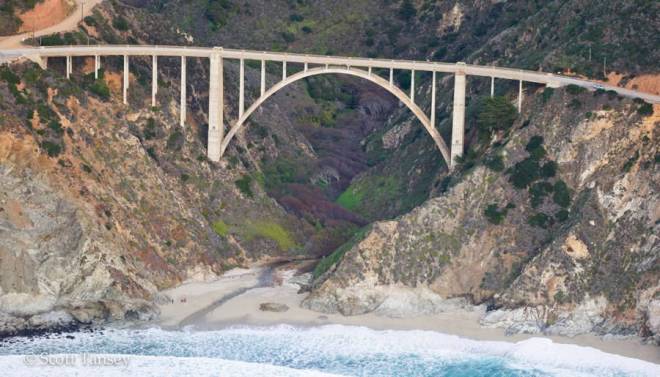 I guess we must have passed over it 20 years ago – without a second thought – when we drove down this road from San Francisco to Los Angeles on a wonderful summer holiday we had with the kids … But I digress.

A lovely bridge in the same class, opened only six years ago, is the Hoover Dam Bypass Bridge, which spans the Colorado River. 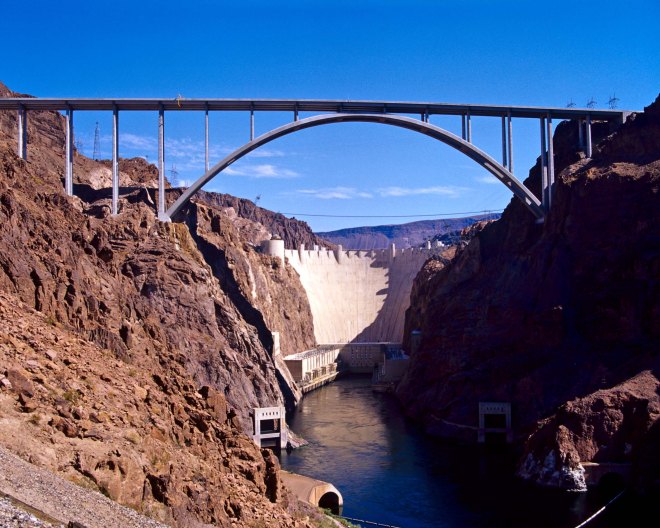 I normally dislike bridges or anything else made of metal trusses. They look so much like the clunky awkward things I used to make with my Meccano set when I was young: all engineering and no beauty. But this train viaduct, the Garabit Viaduct in France, opened in 1884, has great visual appeal.

It may come as no surprise to the reader to know that the bridge was built by Gustave Eiffel, he of the Eiffel tower in Paris (I think the family resemblance between the two constructions is obvious).

That straight line sitting atop the parabola can also float downwards and lie across it, like so, with the parabola getting shallower.

This bridge, the Lupu Bridge in Shanghai, is a nice example of the type.

The line can float all the way down

as it has with this bridge, the Apollo Bridge in Slovakia’s capital, Bratislava.

Now that the line has floated all the way down we can flip the parabola, like so

and we have the suspension bridge!

I have a very soft spot for suspension bridges, as I’ve mentioned in a previous post. It has something to do with the sheer etherealness of these bridges, the feeling they give of just a few strands thrown over a wide, empty, normally watery space. My favourite in this class has to be the Verazzano Narrows Bridge in New York.

Many people – and many web sites – say the Golden Gate Bridge is a beautiful suspension bridge. But I’ve always found it clunky, and I have to say I dislike its colour scheme.

I also want to throw in a picture of the Humber Bridge in northern England. It seems to be the most stripped down of all suspension-bridge designs I’ve ever seen. I can hardly believe it stays up. 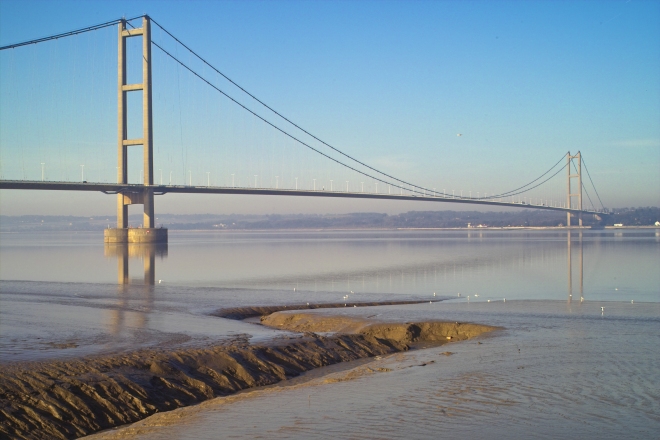 And now I have to come full circle, as it were, back to the King Rama VII Bridge with which I started this post. I’ve learned as I’ve researched on bridges that the fundamentally triangular design of this bridge

is popular in many modern bridge designs. Studying these, I have grudgingly come to the conclusion that the design is not bad looking as long as equal-sided triangles are used. Looking back at the picture which started this post, the reader will see that in the case of the King Rama VII Bridge, the triangle is not equal-sided, which gives me a displeasing sense of imbalance; I add this to my list of dislikes about the bridge. Imbalance is also the reason why I do not like the Puente del Alamillo in Seville, Spain, even though this is a great favourite in posts dedicated to beautiful bridges.

All that straining backwards makes me feel quite exhausted.

After these harrumphs of disapproval, it’s time for me to throw in a few pictures of bridges that are stars in this class. The Millau viaduct, which soars over the river Tarn in southern France, must surely be the superstar in the category

but I think this bridge, the Cooper River Bridge in South Carolina, is just as graceful on a more modest scale.

Well, that was a pleasant tour of the internet. I must say, it’s nice to see that those painful classes of geometry which I endured when I was young have finally come in useful after 50 years.