Call me a sourpuss, a killjoy, a party-pooper, even an old fart, but I really cannot find anything positive to say about the Songkran festival which is in full swing at the moment here in Thailand. For those of my readers who may not be familiar with Songkran, it is Thailand’s festival of the new year. Actually, Myanmar, Laos, and Cambodia all celebrate the same festival, even if it has a different name in Myanmar and Cambodia (Thingyan and Chaul Chnam Thmey) – not surprising really, since all these countries follow more or less the same traditional Buddhist calendar. 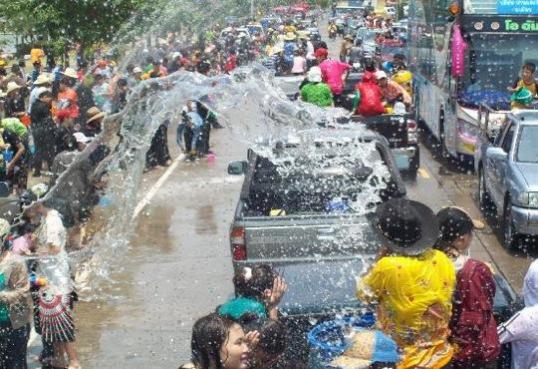 To cap it all, people slather themselves – and others – with a white paste (shades of Myanmar). 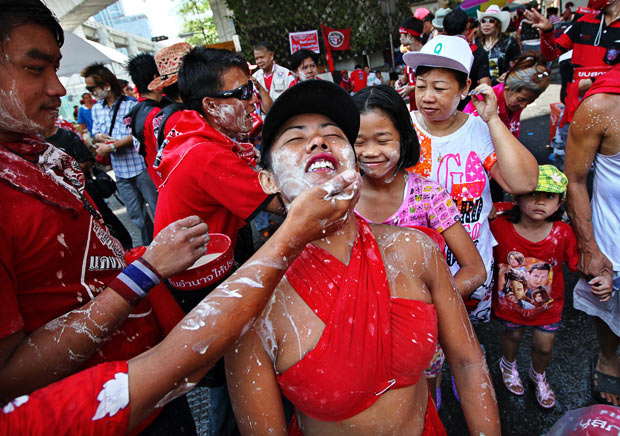 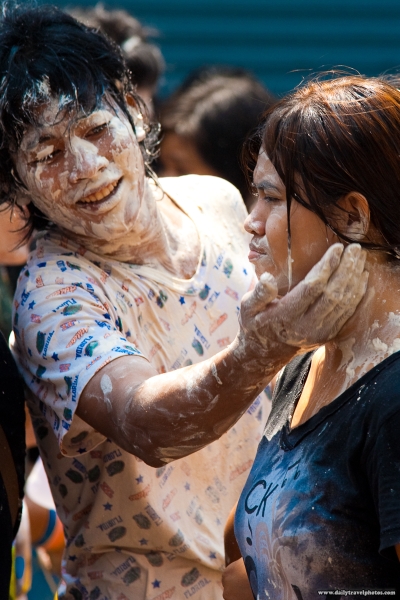 Those who are young, or who have an infantile sense of humour (aïe, my sourpussedness is coming to the surface), find all this hugely entertaining. Shrieks and laughter echo up and down the streets. Clothes are soaked, but no matter, it’s the hottest time of the year, they will dry out in a flash. And off goes another bucket of water!

Of course, for sourpusses like me, who have to get to meetings with officials in nice clothes or have to go to the office to work and who would prefer not to sit in a puddle at their desk, it is a trial to navigate the streets and dodge the pails of water, the hoses, the water guns. And anyway, it’s just so … damned childish to enjoy throwing water at people! (aïe, my party-poopery is coming to the fore: “I grow old, I grow old, I shall wear the bottoms of my trousers rolled”)

What I find really irritating is that all this water throwing is a stupid, facile, totally post-modern corruption of the original festival. Water has a very important role in Thai society, as it does in many cultures. Clean water is the symbol of purity and peace. At the new year, it is used to wash away the dirt of the old year and allow one to start the new year clean and fresh. During the three days of the festival, clean water is poured over statues of the Buddha to clean them. That same water, in some way sanctified by its contact with the Buddha, is sprinkled over family and friends, again as a symbol of cleansing oneself for the year to come. Part of the tradition has younger people sprinkling water on their elders.

In a variation on this last tradition, yesterday in the office my secretary shyly asked me if I would be willing to take part in a ceremony where my colleagues would sprinkle water on my hands, in my role as the head or “elder” of the office. I was glad to, I announced, feeling that this at least gave some meaning to the silly goings-on outside my window. So at the appointed time, my colleagues solemnly – if somewhat self-consciously – processed into my office. A silver bowl filled with clean water strewn with petals was placed on the table, and one by one – eldest first – they came up, knelt in the Thai fashion, and poured a small cup of water over my hands, while wishing me a happy new year. I wished them and their families a happy and prosperous new year in return.

When I came home for lunch, I noticed that a statue of the Buddha had been set up in the lobby, with a bowl of water nearby. Why not? I thought. I might as well go the whole hog. So I offered the statue a traditional if rather awkward namaste and poured a cupful of water over him.