My wife and I both agree that without a doubt the Bungle Bungle National Park was the highlight of our recent tour of the Kimberley (I suppose I should use its proper name, Purnululu National Park, but Bungle Bungle is such a delightfully silly name that I shall stick to that). It has been chosen as a World Heritage Site and for once I agree with this. What we have here is a deeply eroded range, and I think the best way to appreciate the unique geology of the Bungle Bungle is through an aerial photo 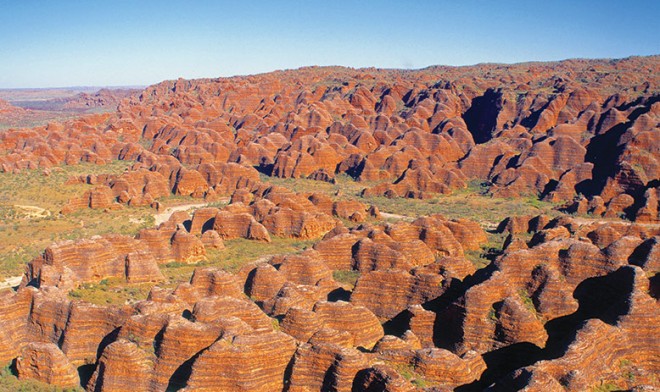 Readers will immediately notice the smooth rounded shapes into which the rocks have weathered – beehives is a commonly used descriptor and seems very apt. The guidebook with which we were thoughtfully supplied on our coach stated that this type of formation is very rare – only a few other places on Earth have it, and not nearly as extensively as in the Bungle Bungle Range. UNESCO, in its World Heritage Site write-up, notes approvingly that “the Bungle Bungles are, by far, the most outstanding example of cone karst in sandstones anywhere in the world.” Without going too much into the geological whys and wherefores, the fact that the rock has eroded into these smooth rounded shapes seems to have to do with the bands in the rock, seen quite well in the third photo above and even better in this photo taken by my wife from ground level.

The key to the bands’ existence is the clay content of the rock. The darker bands have more clay, which means they hold moisture better, which in turn allows a very thin film of cyanobacteria to grow on the rock. It is this film which gives the rock its darker colour. The red bands, on the other hand, having less or no clay, dry out quicker and so cannot support a colony of bacteria. Instead, they have been stained orange-red by iron and manganese deposits. The bacterial film protects the rock from too rapid an erosion, which allows the rounded shapes to form.

Geological considerations aside, it’s a delight to walk through these humped and rounded rocks, which are split by numerous gorges and chasms, a number of them having trails laid along them. We walked just two, the Cathedral Gorge and the Echidna Chasm. The Cathedral Gorge narrows slowly

to finally finish in a pool partially covered by deep overhangs. 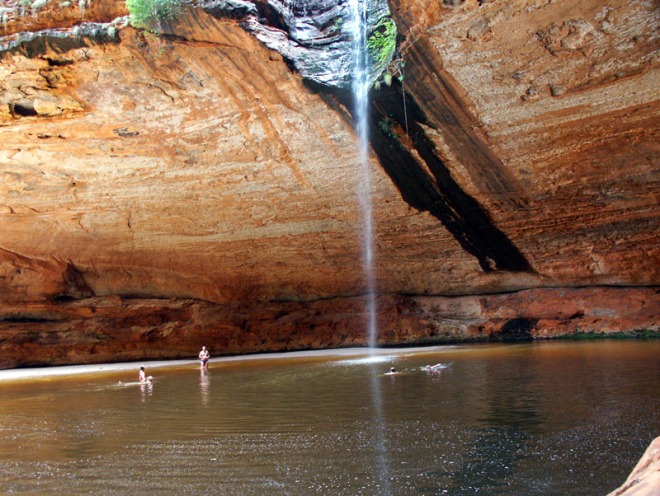 The Echidna Chasm, on the other hand, is a deep, narrow gash in the rock, at times so narrow that it is hard to get through. After the surprise of coming across Livistona fan palm trees at its mouth (palms are not the first trees that come to mind in this hot and arid landscape)

one edges into the chasm itself. There is a certain fun in threading one’s way through, at some points having to climb and clamber over huge boulders, sections of the walls which have come crashing down; one keeps looking nervously up to see if others might not be about to give way and squash one like a beetle. But there is also an ethereal beauty in this chasm. At certain times of the day, the sun catches the rocks and makes them literally glow. Our iPad cameras were too feeble to catch this wonderful light, but this photographer has managed beautifully.

We would gladly have stayed longer in this Park and done more of the trails. But that is the downside of organized tours: the tyranny of The Schedule.

After detailed discussions, my wife and I have agreed on two more modest scheduled highlights, both, interestingly enough, having to do with water. One was the boat ride on a section of the Ord River near Kununurra, which has been dammed for irrigation purposes. From such utilitarian objectives has come a very pleasant body of water, in the form of several kilometers of the river which are filled year-round with water (a rarity in Australia). 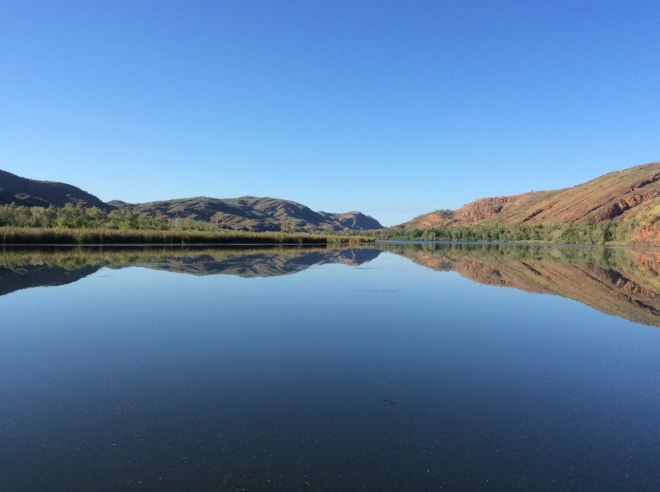 “Water is life” our driver-cum-guide would constantly intone, and this stretch of river was the living proof of this. Apart from several well-fed freshwater crocodiles which we spied along the banks with a twittering of excitement, we saw a large number of birds, the most majestic of which was undoubtedly the white-breasted sea eagle 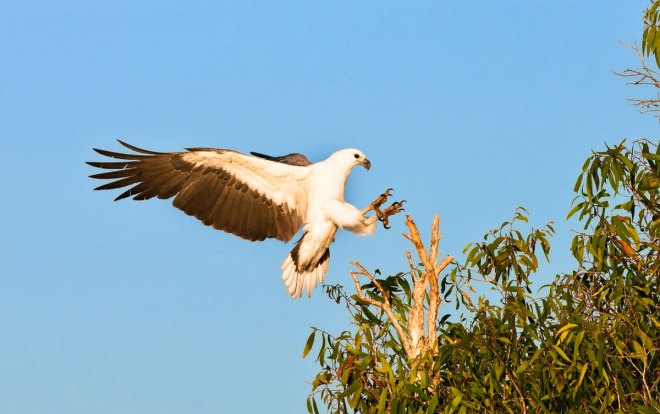 and the sweetest of which was the Jesus bird (aptly named since it seems to walk on water). 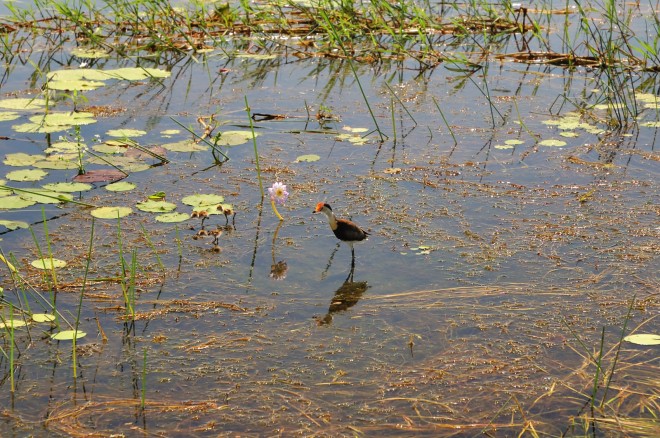 The mother hatches the chicks, the father is then solely responsible for their upbringing (many of the ladies on board noted this division of labour with approval; the men said nothing). But perhaps the most interesting wildlife we came across was a colony of fruit bats hanging out (literally) in a couple of trees along the bank, making quite a noise as they yelped and barked – when do they sleep, I wonder?

From the mutterings of disapproval among our Australian companions and the spirited defense of the bats put up by our guide, we surmise that they are considered a nuisance in more urban settings, no doubt because they sink their fangs into the fruit of your garden which you had been looking forward to eating.

The second modest scheduled highlight was Windjana gorge, in the King Leopold Ranges (why the British explorer who first came across these ranges named them after the King of the Belgians is a bit of a mystery to me; my guess is he was hoping the guy would fork out for his next expedition). Apart from the frisson we got from seeing twenty or more freshwater crocodiles all in one place waiting in complete stillness on the banks or in the water for their next meal to go by

the gorge itself was very pretty 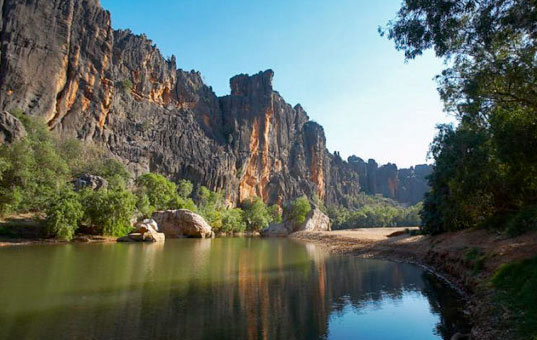 and once again the rocks glowed orange-red in the setting sun. 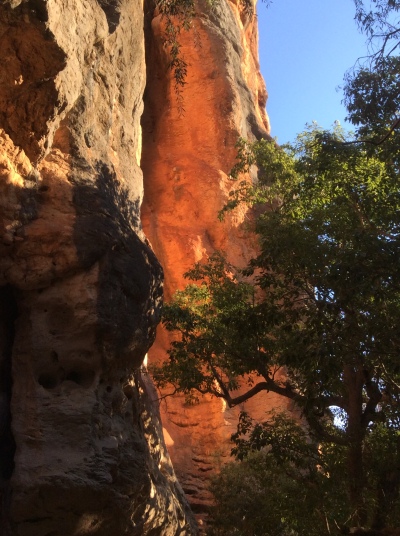 There was one other highlight, which wasn’t marked in The Schedule, and that was the night sky. In many places, we camped far, far away from any polluting light sources. This, combined with the normally clear skies, meant that when the moon didn’t get in the way we had glorious views of the night sky. It was a sky without the constellations of the Northern Hemisphere with which my wife and I are familiar, but nevertheless a magnificent site to behold, especially on the nightly walks to the toilet to which I alluded in the previous post. 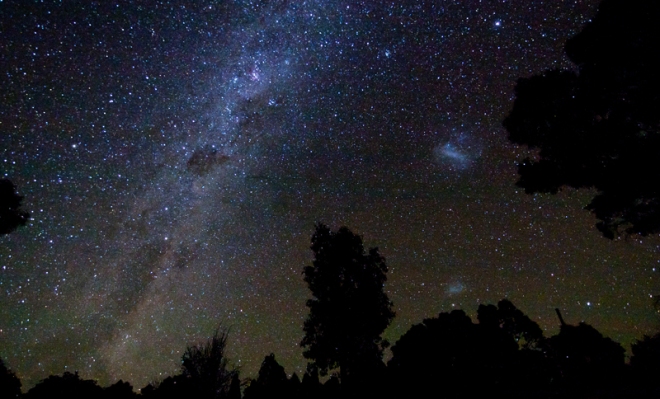 Our last night out, we dragged our camp beds out of our tent, and as we dozed we watched the Milky Way wheel across the sky. Wonderful. But as they say, there is no gain without pain. I am still spreading anti-histamine cream on the dozen or so bites I got from the accursed Australian mosquitoes that night, may they rot in Hell.