In the little Ligurian village of Sori which we go to often, there is a charming steep lane which has the great advantage of being closed to cars. 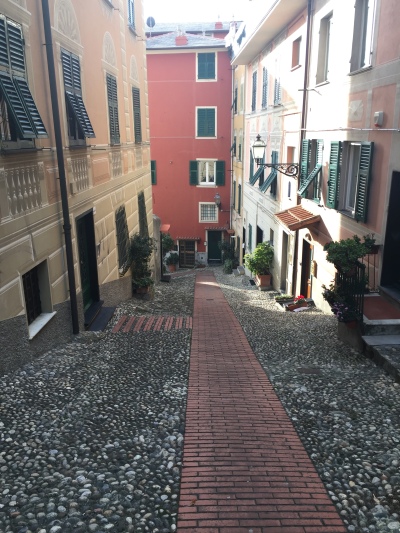 One house on this lane sports the following plaque. 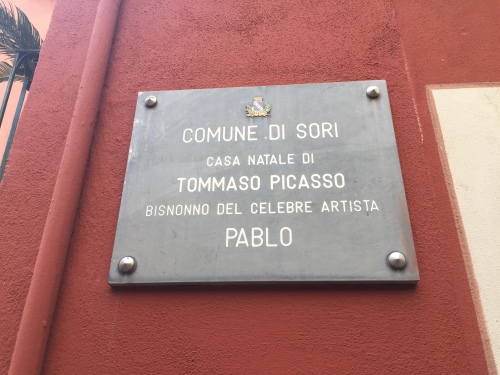 It reads (in translation): “In this house was born Tommaso Picasso, great-grandfather of the famous artist Pablo”.

Well! This is enough to make my breast swell with pride for my adopted village-by-the-sea! Admittedly, the connection is a bit remote; I mean, it’s only a great-grandfather of the great Pablo, and on top of that he left the village, no doubt as a sailor, some 200 years ago, eventually settling in Malaga in Spain. Nevertheless, the village can justly lay claim to a modest place in world history.

Picasso researched his family roots and knew that at least one part of his DNA came from this part of Italy – Picasso is a common name in Liguria; this is one of our local supermarkets. 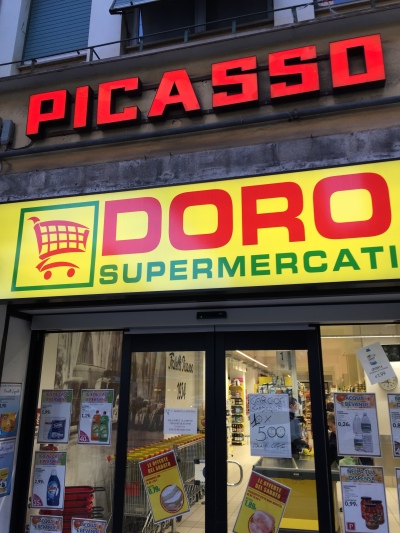 And here is the notice of the sad death of one Paolo Picasso – was the parents’ choice of the first name at all influenced by the existence of the Great Artist, I wonder?

That being said, I’m almost certain that Pablo Picasso never visited the village; it wasn’t until quite recently that a local historian dug out Tommaso’s birth certificate and nailed down the place of his birth. But I’m sure that if he had come here he would have been proud of the village’s artistic talents.

For instance, I can well imagine that he would have had a tolerant smile for the parish church’s neo-baroque frescoes 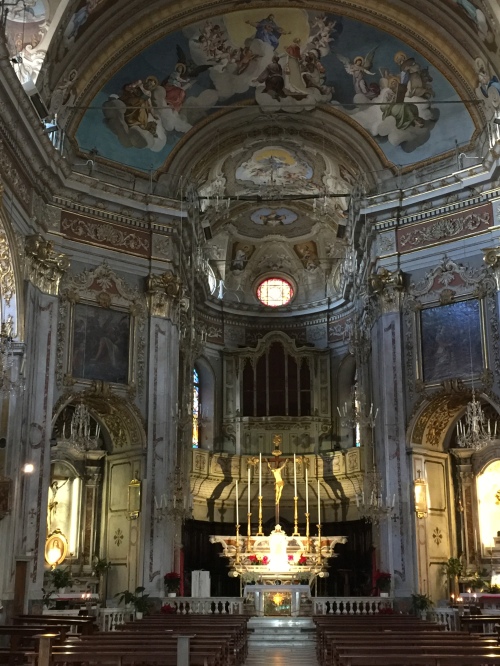 This observation of mine might well surprise readers, since we know Picasso as a giant of cubism 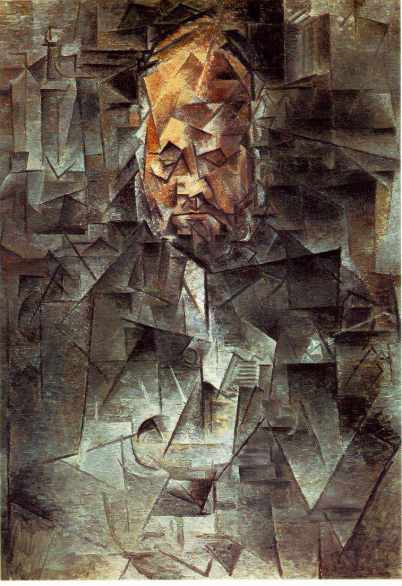 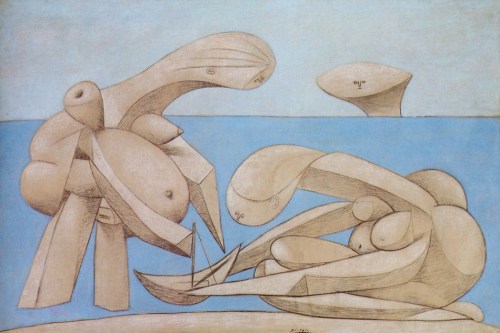 But he refused to be pigeonholed, and painted in many other styles during his long life. For a while, there was a strong strand of realism in his work, although he adopted more neoclassical conventions, in contrast to the Baroque froth we have in the village church. Here are a couple of pieces from this neoclassical period, his son Paul dressed as a harlequin

But his early Blue Period also has some lovely pieces of more traditional representational art, this Old Guitarist for instance.

He also had a fascination for monumental women, like this Three Women at the Spring.

I’m sure, too, that Picasso would have delighted in the trompe l’oeil decorations which are so common on the houses of Liguria and of which this is an example from that same lane where his great-grandfather was born. 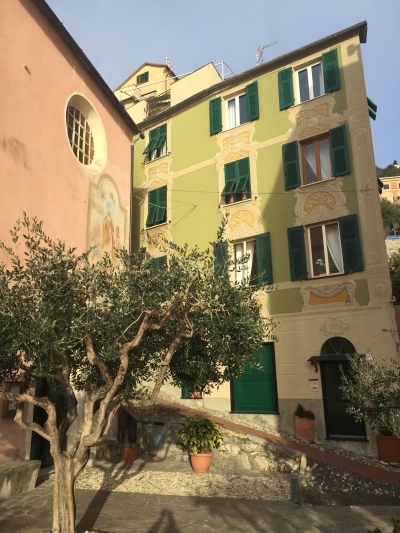 He was into this kind of fancifulness, as these few examples of his ceramics attest.

Picasso no doubt would also have been well disposed to the clever villager who has decorated his parabolic dish with a nice marine scene.

Although Picasso doesn’t seem to have painted on made objects like our friend has done, he did make a number of sculptures where he painted on formed metal and other materials. For instance, there is this lovely Head of a Woman, which is painted steel

while this piece, Friendship, is a composite of various painted materials.

As for marine scenes, as a man of the Mediterranean Picasso painted a number over the years. I throw in this one, Ulysses and the Sirens.

What would Picasso have thought of these scenes painted by the children of the local artistic cultural association? They use the walls of the underpass at the village railway station as their canvas, and every year each new batch of students repaints the whole thing. This is a sampling of the current contribution. 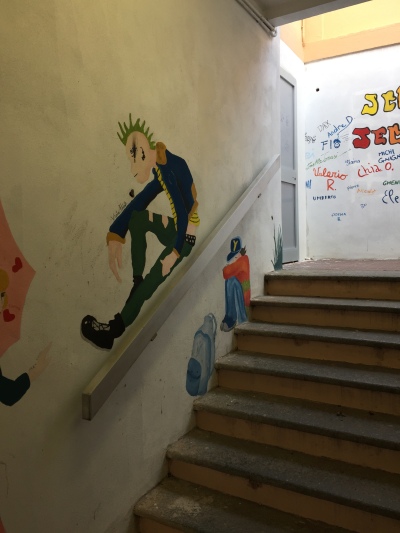 He might have approved. After all, he once pronounced, “All children are artists.” On the other hand, he might have been thinking of the art of younger children, like this picture drawn by my son when he was six-seven,

art which has not yet been “contaminated” by formal art teaching. In the quote I cite above, Picasso goes on to say, “The problem is how to remain an artist once one grows up.” He also once said, “At eight, I was Raphael. It took me a whole lifetime to paint like a child.” This Dance of Youth is a nice example of Picasso “painting like a child”.

In fact, in front of pieces like this, my son whom I have mentioned above tends to mutter “I could do that” (to which my reply always is, “well, why don’t you? you might be able to make millions.”)

I’m not sure what Picasso would have thought of the graffiti art which some naughty boys have painted in dark and quiet corners of the village. 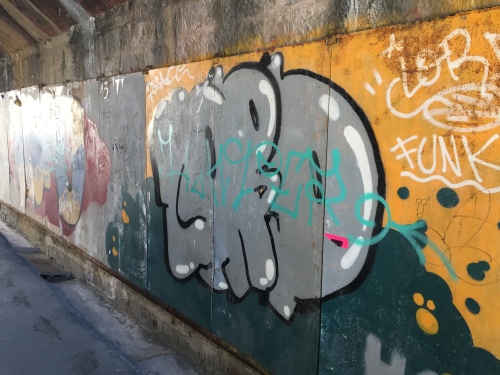 and some have shamelessly copied his style – or rather, one of his many styles.

Picasso was certainly very open-minded to artistic trends, so who knows, he might indeed have given graffiti artists his blessing.

The really naughty boys have also sprayed this type of graffiti in the darkest corners of the village (a graffiti found everywhere in Italy). 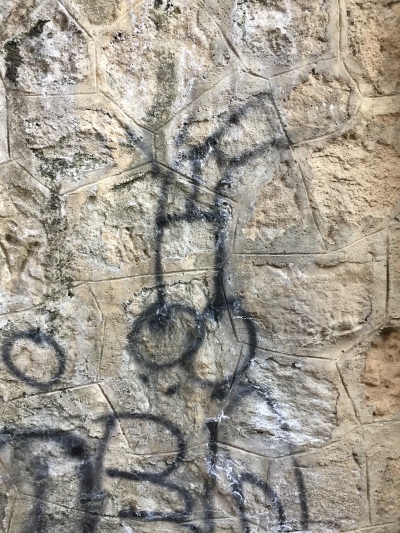 I think Picasso would have laughed heartily; he drew some pretty naughty pictures himself, as attested by this drawing of Raphaël and his mistress la Fornarina in the throes of lovemaking, with the Pope looking on (one of a long series of drawings all obsessively on the same topic). 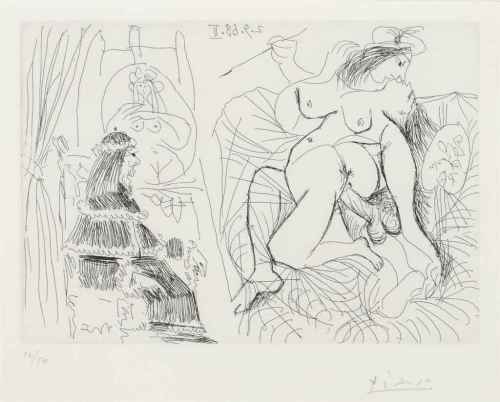 Well, that was a nice tour of both the village and of Picasso. I will admit that it has sometimes been a strain to draw parallels between the art of the village and Picasso’s, but it’s been fun trying.