Whenever in my wanderings through the world’s art museums I come across pictures such as this one, a painting from the 1600s of the Austrian Archduke Leopold Wilhelm in his Gallery in Brussels 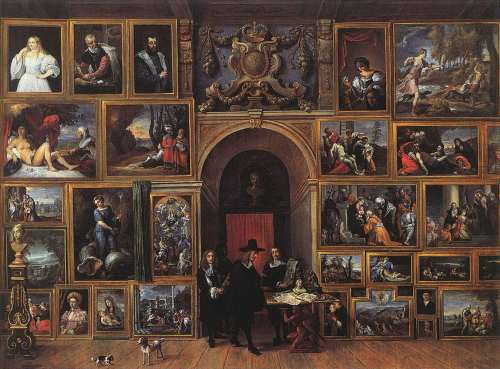 I ask myself how on earth the viewer, in this case the Archduke, managed to really see any of the paintings he had put on the wall. I mean, when so crowded together like this the paintings just become wallpaper. I don’t fully comprehend the point of paying a multitude of dollars (or probably guilders in the case of the Archduke) for each of your paintings, to end up with an effect that you could no doubt get with a roll of wallpaper bought for a mere handful of dollars down at your local hardware store.

My wife and I had a very close-up example of this effect a few days ago, when we visited the Boschi Di Stefano collection in Milan. A little bit of background is in order. Mr. Boschi and Ms. Di Stefano got married in 1927. Two years later, they started collecting – and collecting – and collecting. Only after Ms. Di Stefano died in 1968 did the collecting peter out. The couple ended up with a collection of nigh on 2,000 works, all from contemporary, mostly Italian, artists. The problem is, they lived in a not terribly big apartment, cut up, as was the habit then, into a bunch of small rooms. No problem! They covered all the walls, everywhere, even in the bathroom, with paintings.

So my wife and I would step into these small rooms and have paintings pressing in on us from all sides. 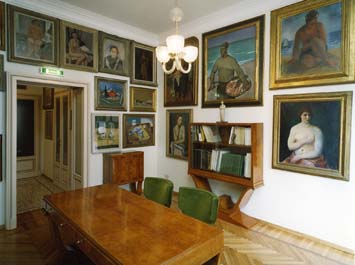 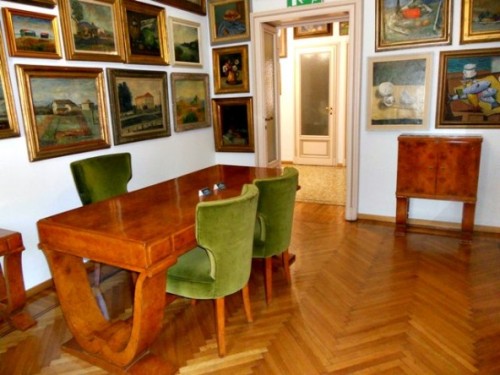 In my case at least, my eyes would dart from side to side and up and down, with my brain nervously asking “where do I start?” It took an effort of will to pick out one painting among the masses crying out for attention and just focus on that one for a few minutes, before repeating the process with the next one. Most exhausting.

It was worth the effort, though, for one thing that struck me as I waded through all the paintings was how atypical many of the pieces in the apartment were. Take Lucio Fontana. I’m sure everyone has in mind a “typical” Fontana: this one, for instance, where he elegantly slits a blank canvas 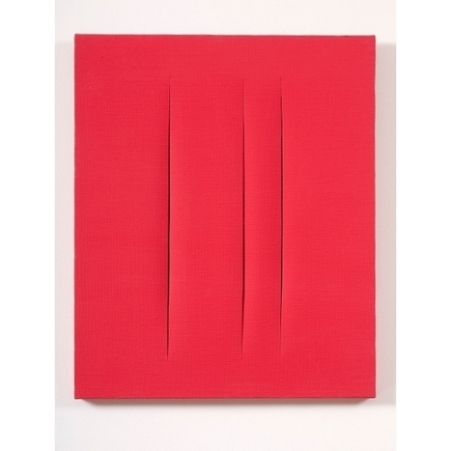 or this one where he perforates the canvas instead. 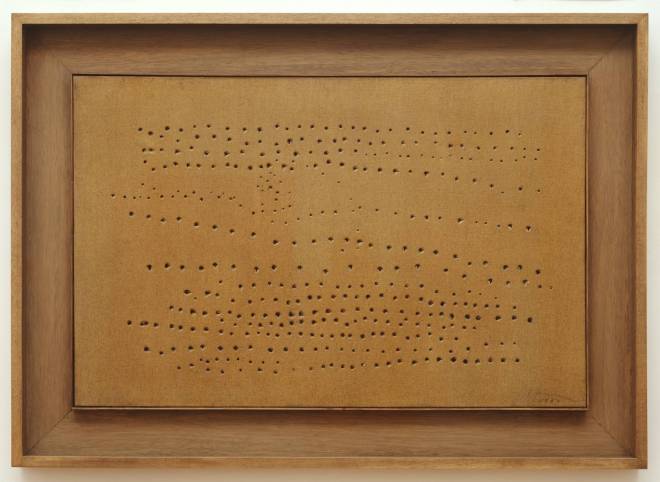 The apartment had a number of these, but it also had this 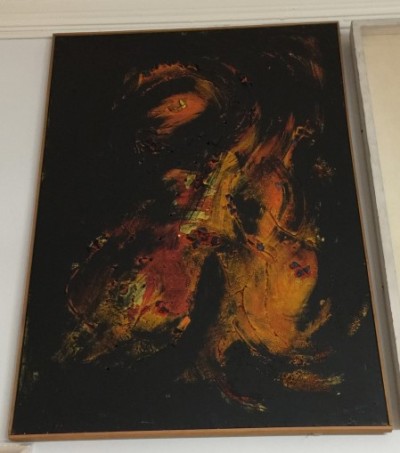 a type of abstraction which I personally had never seen in Fontana.

Or take Giorgio De Chirico. Again, a “typical” painting associated with De Chirico will look like this. 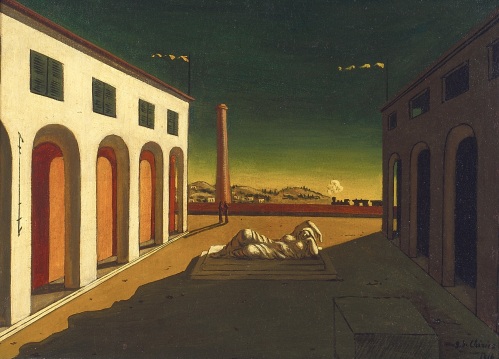 But the apartment instead had this painting by De Chirico. It depicts a gladiator school. 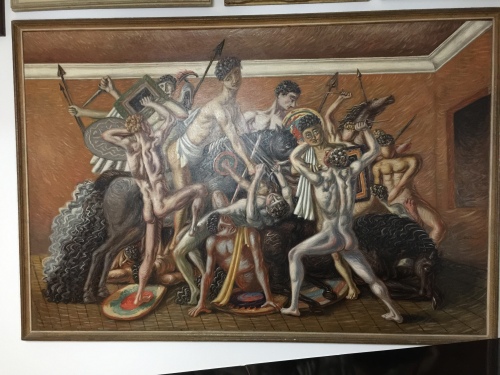 Not a style I would have associated with De Chirico.

Or how about Giorgio Morandi who you would think, based on the examples you see in museums, just painted bottles like these ones, over and over again. 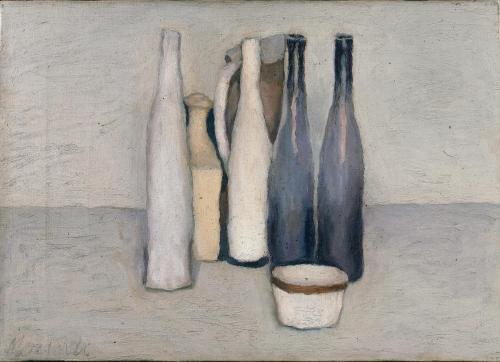 The apartment, while also having a bottle painting by Morandi, had a couple of landscapes by him. 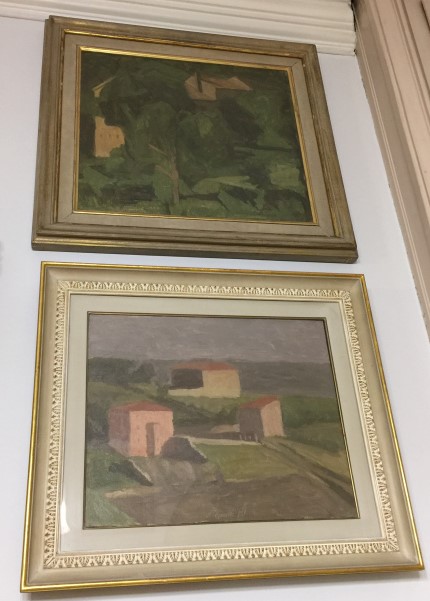 I don’t think I’ve ever seen a landscape painted by Morandi.

I finish with Enrico Baj, a painter whom frankly I dislike. His “typical” painting is something like this. 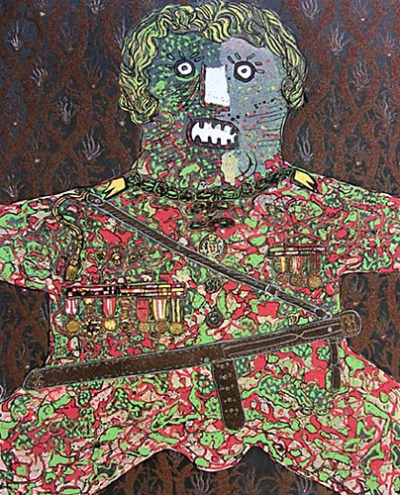 This is his leitmotif: grotesque persons, repeated over and over again, ad nauseam. Imagine my surprise, then, when I saw this Baj in the apartment!

More different than from his “normal” style you cannot get.

There were some other interesting pieces in the apartment. This piece, for instance, by one of the Italian Futurists (I forgot to note the name). 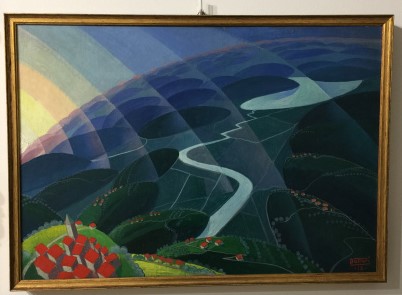 Normally, I’m a little wary of the Futurists since they seem to all have been enthusiastic Fascists, and in fact the painting is dated the Fascist way, “IX”, the ninth year of the Fascist Era, but it charmed me. 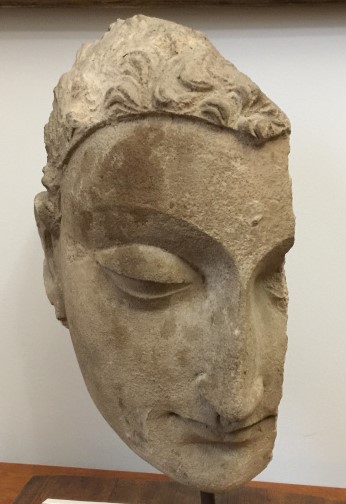 Happenstance has split the head in a most arresting manner. The label described it as 4th-5th Century AD, so presumably late Roman. Yet, looking at the cut of the eye and the shape of the nose, it didn’t look Roman. To my untrained eye, there seemed to be a stylistic resemblance to the Indo-Greek art which was produced in Ghandara, Afghanistan. Where did our collecting couple find this, I wonder?

The couple did not just collect, they also created. Ms. Di Stefano was an accomplished ceramicist in her own right, and the apartment holds a number of her pieces, among them these delightful little fish dishes 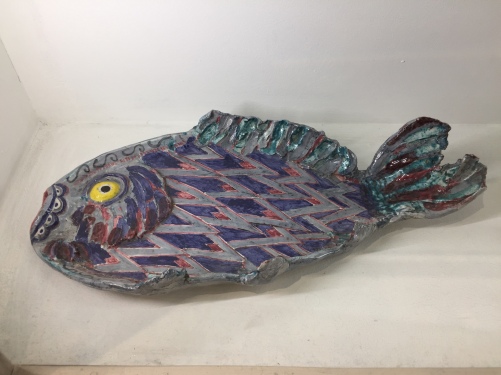 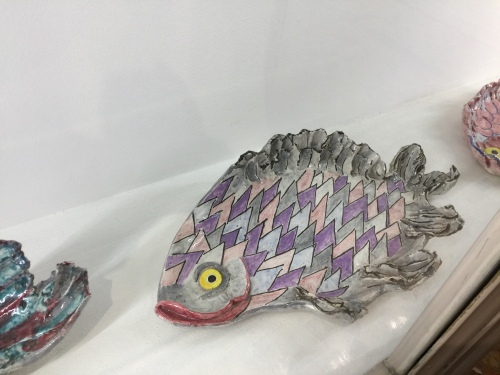 as well as this horse and rider. 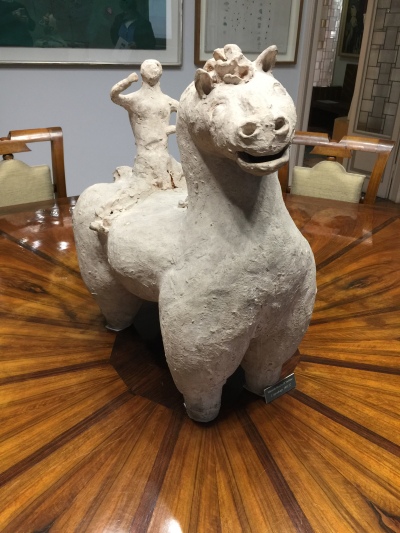 Yes, it was all lovely, but really too overpowering. We staggered thankfully out of the apartment, walked down the stairs (themselves a nice example of 1930s architecture, as is the whole building)

and repaired to the nearest bar for a well-earned drink.