Many years ago, when I first visited Italy, one of the things that struck me was the very flat facades which Italian churches had. In the Basilica dei Fieschi, the topic of my last post, we came across a typical example of the genre. 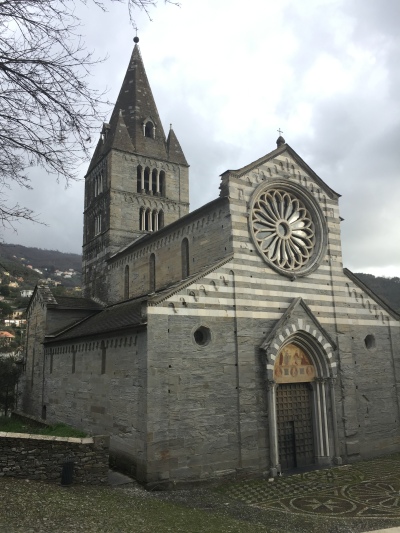 These facades were so different from the much more vertical and more articulated church facades of Northern Europe which I was used to. I throw in here pictures of la Cathédrale Notre-Dame de Paris, Cologne Cathedral, and Westminster Abbey as examples of what I mean. 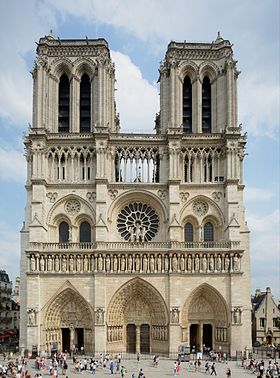 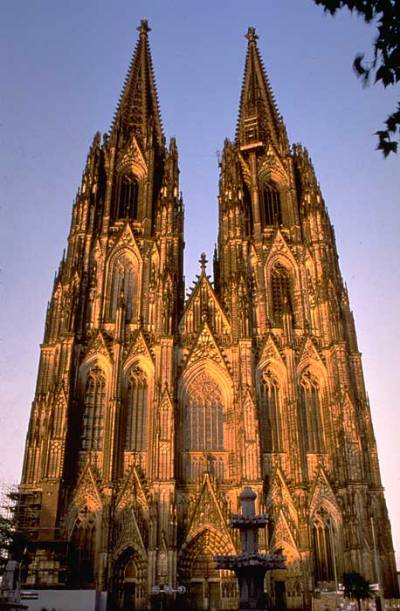 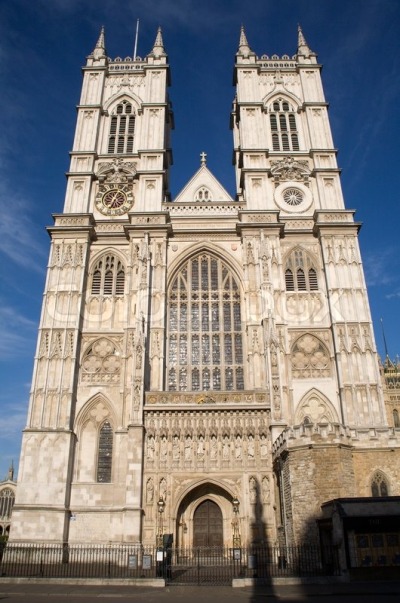 Much more than these facades, I find that the facades of Italian churches, with all those acres of flatness, can be quite boring, if not downright ugly, to look at unless something is done to liven them up. Consider, for example, the facade of the Florentine Church of Santo Spirito, which my wife and I came across in our recent visit to Florence. 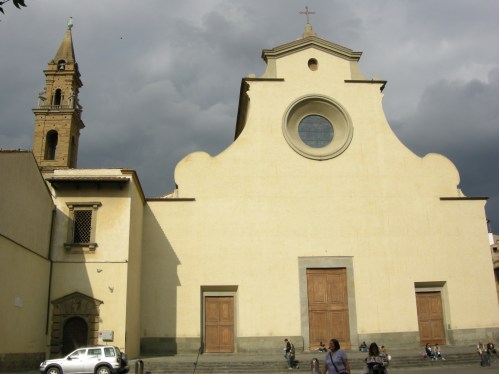 I mean, look at that! It’s just like staring at a blank wall from your office window. Every time we crossed the square in front of it – which, given the location of our rented apartment relative to the locations of the places we were visiting, was quite often – I would comment disapprovingly on the facade’s drabness, its flatness, its total boringness until my wife finally remarked with a touch of asperity that I was repeating myself. But I mean, look at it!

Somewhat less flat but just as drab are the facades of those Italian churches – and there are many – which for some reason never got completed, initially because of lack of money, or quarrels about proposed designs, or the start of wars, or the break-out of pestilence, and thereafter simply through inertia. The facade of the Basilica of San Lorenzo, also in Florence, is an excellent example of this type. 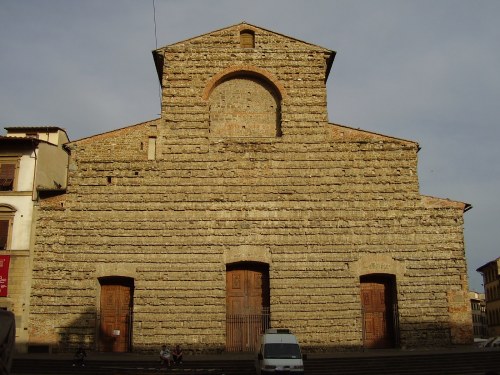 Those rough bricks are just crying out for an elegant, visually interesting facing to be added. That, of course, was the plan. A competition was held, which Michelangelo won. His facade that would have looked like this. 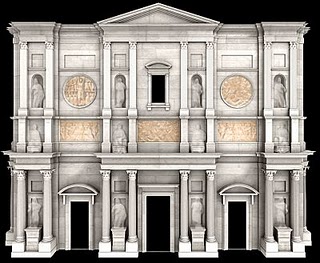 He had gone so far as to choose the marble for the facade. But the Medici pope who was paying was short of cash. So Michelangelo had to choose a cheaper stone. Then the Pope died. Then there was a war. Then Michelangelo was called to Rome by another pope, and that was the end of that. There have been at least three attempts since then to complete the facade, the latest no more than a few years ago, but all have come to naught.

Of course, it is not automatically the case that a finished facade will look better than the original bare brick. Personally, I think that Michelangelo’s facade would have been a definite improvement. But that’s because I’m a fan of simplicity in design, and Michelangelo’s has all the looks of a simple design. Take a look at this facade, though, built more or less at the same time that Michelangelo’s wasn’t.

This is the church of the Certosa di Pavia, which my wife and I visited a few days after our visit to the Basilica dei Fieschi. It was a Carthusian monastery whose creation had been ordered by Gian Galeazzo Visconti, Duke of Milan. The church was to be his family’s mausoleum, and therefore had to be suitably magnificent. For this purpose, he gave the monks access to large amounts of funds which they could only use to embellish the church. So when the Carthusian monks started on the facade, only the best was acceptable, and the more, the better. To the fundamentally sober facade, a riot of Renaissance statuary and bas-reliefs were added, covering every square centimetre of the facade’s surface. Let me zoom in on just a few of the details. 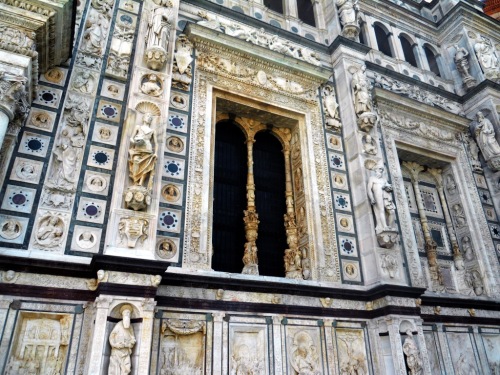 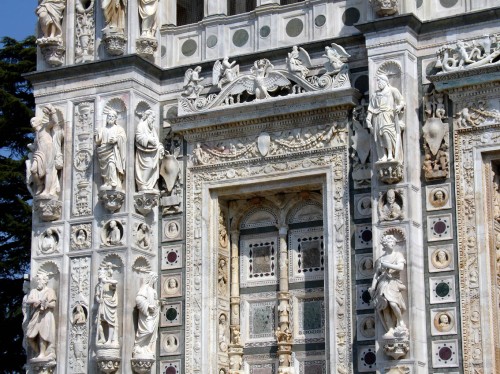 Luckily, all this hue and cry in stone does not overcome the overall effect, which is really very pleasing on the eye.

Not so in the case of Milan’s cathedral. 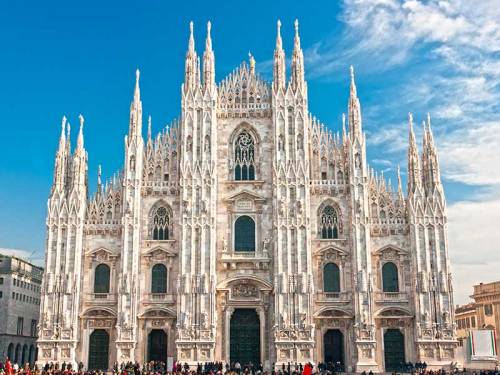 Here, the statuary and other embellishments on the facade have gotten completely out of hand. The effect is not helped by the over-the-top statuary and embellishments having invaded every square centimetre of the entire outer envelope. All this gives one the feeling that the cathedral is drowning in white marble froth.

So where does this all leave us? Well, I suppose we have here yet another example of Aristotle’s principle of the golden mean: we should always seek the middle ground between the extremes of excess and of deficiency. So in our case, neither facade-less nor frothy facade.

With this in mind I invite readers to go back to facade-less Basilica of San Lorenzo. What design could we propose to Florence’s city fathers? Let me immediately say that the obvious proposal of simply finally installing Michelangelo’s design won’t fly. This was there the very recent suggestion by the-then mayor of Florence, Matteo Renzi (who, fyi, went on to be briefly Prime Minister of Italy). This proposal was shot down, on the grounds that putting up Michelangelo’s facade now would be akin to making fake Louis Vuitton handbags (that precise simile was not used, I hasten to add). So a copy of an old design is out. Which is a pity, because I think that the facade of the Florentine church of San Miniato, for instance 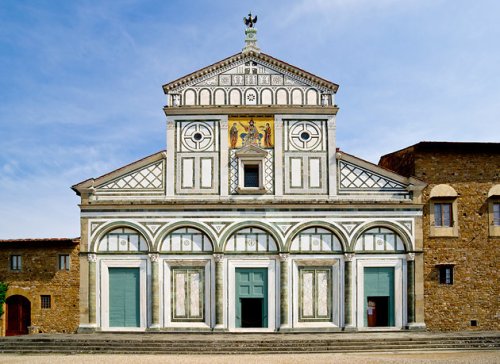 or of Pisa’s cathedral 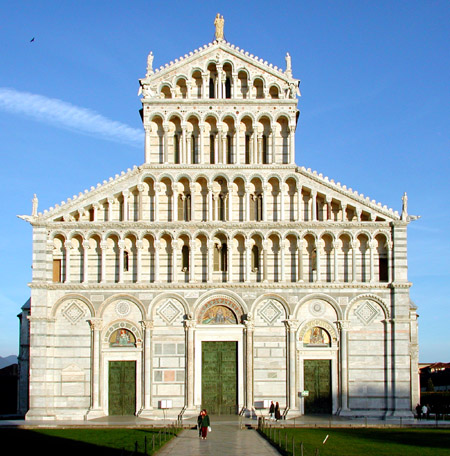 would both nicely fit the golden mean principle.

Personally, I think we should take our cue from San Miniato’s use of colored lines, although maybe to avoid the criticism of simply copying the past, we could adapt a more modern approach to line-drawing: a Mondrian style, for instance. 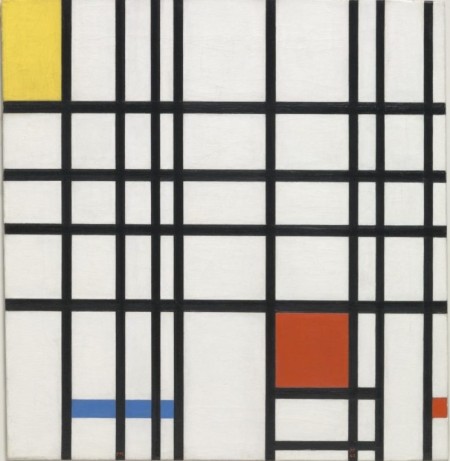 A follower of Mondrian’s actually adapted the style to a building facade, although in this case it was a very secular subject, a café in Rotterdam. 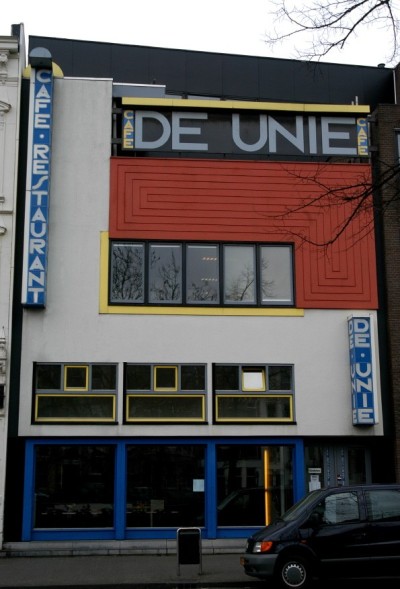 Given the ecclesiastical nature of our subject as well as its venerable age, I think we would need to go for more muted colours than Mondrian’s signature blues, reds, and yellows. Perhaps we could adopt the more muted hues of his earlier works. 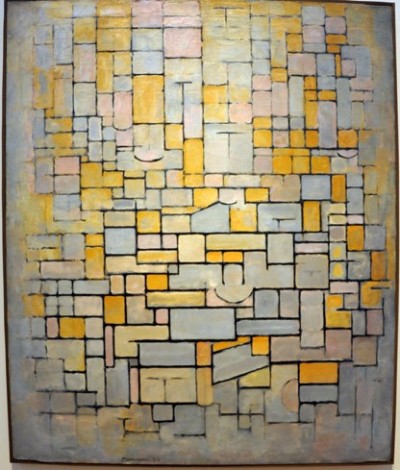 If I had access to an app which would allow me to make architectural drawings, I would come up with a design to propose to readers. Instead, I will just leave it to their imagination as to what a Mondrian-like facade on the Basilica of San Lorenzo might look like.

One thought on “THE GOLDEN MEAN IN CHURCH FACADES”