Let me start this final post on the topic of UK industry in art by throwing in photos of a couple of paintings which didn’t make it into my previous posts but which really are worth being seen.

And now, with that out of the way, let me meditate for a minute on where things stand for UK industry and what its future might look like.

Through sheer coincidence I have been publishing these posts just when the British Parliament is going through what will probably be the last moments of a contorted, acrimonious process which will take the UK out of the EU, a process that was kicked off by the Referendum results of 23 June 2016. It is the leave vote that interests me here. There were many reasons why people voted to leave, many of them I’m sure having nothing – or relatively little – to do with the EU per se. Consider the following map, which gives a regional distribution of the vote. 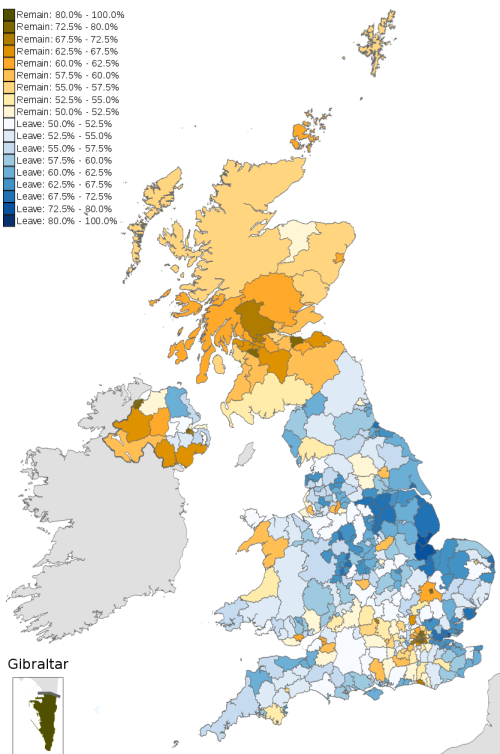 The first thing that strikes one is the very clear difference in voting patterns between England and Scotland, and to a lesser degree Northern Ireland. That explains some of the Parliamentary shenanigans we have been witnessing these last two years. Putting that aside, the other major thing that strikes one is that, just from a territorial point of view, the vast majority of England and Wales voted to leave! (although the vote was admittedly close in many places) If the overall vote ended up such a close balance between leave and remain, it is because the bigger cities, which have big populations squeezed into small territories, voted strongly for remain. The following population-adjusted map shows this effect: London and its heavily populated surrounding swells, Scotland and Wales with their small populations shrink.

This divergence in the Referendum results between the large cities and the rest of the country has been interpreted as a protest vote on the part of those who live in the smaller towns. The Referendum was, so the thinking goes, a way they could figuratively stick a finger in the eye of the big-city elites. Since the EU is seen in the heartlands to be very much an elite project, a vote against the EU in the Referendum was very often a vote against the big-city slickers. The people who live in England’s and Wales’s small towns feel left behind, abandoned by the big cities. This must be especially true of towns which were once heavily industrialized whose citizens have seen their proud towns founder and collapse while the big cities seemingly have continued to grow and be ever more prosperous. One of the things that struck me as I prepared the last six posts is how many of the small towns in the paintings I was looking at were once busy, prosperous industrial towns and are now, because of deindustrialization, shells – ghosts – of what they once were. Looking at where the towns in the paintings I chose are on those voting maps, I can understand how the bitterness which has accumulated over the last forty years in these small industrial towns could have spilled over into a vote against the EU – especially since the UK’s membership in the EU started a mere decade before the UK’s deindustrialization started in earnest.

It’s so tragic really, because it looks like many leave voters actually stuck a finger in their own eye. As we have seen over the last few months, manufacturing, which although much diminished still mainly takes place in the old industrial towns, has taken a hit because of Brexit, with one multinational company after another closing down or downsizing their British operations. It will continue taking a hit: in the long term, it has been predicted that Brexit will cause more harm to those who voted to leave than to those who voted to remain.  I fear that the divide between England’s big cities and the rest of the country will only deepen once – as I think is now inevitable – the UK leaves the EU. In turn, this will increase the social tensions which already exist and I see no obvious way of defusing them outside the EU. I must confess to being quite gloomy about the UK’s future prospects.

All photos of paintings are from the Art UK website