As my country of citizenship moves inexorably towards a historic referendum on whether or not to leave the EU, with there being a damned good chance that a majority will vote yes, my thoughts turn towards what it means to be British. And of course, the first thing that comes to my mind is … cricket (although you can’t really say it’s a British game; it’s the English who developed it while the Scots, for one, hardly play the game at all).

I started playing cricket, at school, in the summer of 1963, and played my last game, at school, in the summer of 1972. I stopped playing with no regret (and anyway went to University in Scotland, where, as I have just mentioned, hardly anyone plays cricket). Truth to tell, I was never very good at the game. I never could get over my nervousness of having someone throw a hard – very hard – ball straight at me, and pretty damned fast at that. In the years I played, batters protected their shins with pads and their testicles with a cup. The rest was naked, unprotected, at the mercy of nasty, vicious hits from the ball. That being said, when I was far out of the line of fire, standing in the far reaches of the field waiting idly for the odd ball to come my way, I could not help but admire the simple beauty of it all: lovely green grass sweeping off into the distance, framed by a venerable tree or two, the field dotted with people kitted out in impeccably white attire, and with luck a beautiful summer sky crowning the whole.

It’s even better if there is a quaint old pub in the background to which one can retire for a refreshing draught of the local ale. 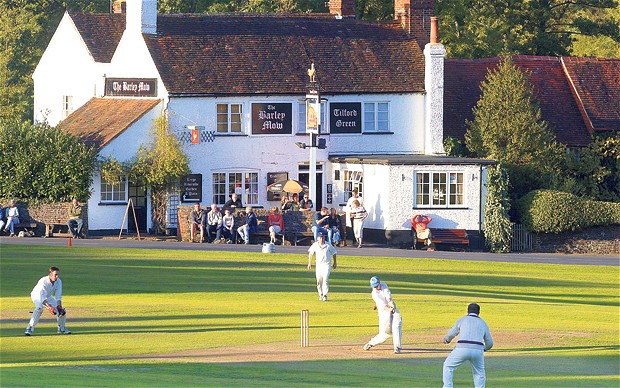 And when batsmen were good, it really was a pleasure to the eye to watch them taking clean, easy swings, knocking the ball this way and that, twisting their body elegantly as they followed through their shots. 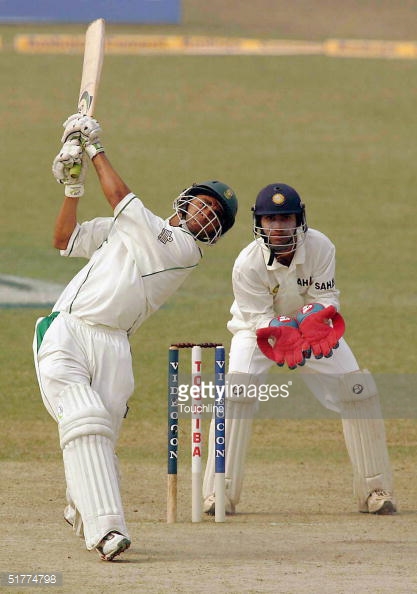 Yes, elegant is the word for the best of cricket.

I still remember with great pleasure a match we played when I was 12-13 years old, against the local village. It was an annual affair, where we fielded a side of mixed Masters and boys. For some reason, I was included – someone must have been sick. In any event, I have this memory of politely playing against the local farmers on the village green, a beautiful oval surrounded by great beeches. I batted way down the list and was out pretty quick. Then I watched from the edge of the playing field as we got convincingly trounced. No matter, we were English, and the winners and the losers mingled in good cheer at the end:
“For when the One Great Scorer comes
To mark against your name,
He writes – not that you won or lost –
But HOW you played the Game.”

As the summer sun slowly set and the shadows grew longer across that village green, we ate home-made cakes and quaffed the local cider – we boys quaffing with special permission from the Headmaster.

Well, as much as I have changed, so has cricket. The commercial diktats of TV required that the achingly long Test matches be shortened to much shorter one day-and-night matches. The result is far more exciting to the uninitiated, as slugging has become the norm for batters rather than the patient, incremental build-up of runs of yesteryear; anyone can appreciate slugging. Taking a leaf out of football, all that uniform white in the kits has given way to a rainbow of colours as each national side now goes out in its own distinct colour. I suppose like that it’s easy to tell who is batting and who fielding. To get the evening viewers, matches go on into the night under the glare of lights. No doubt players get paid much more. And cheating during play, so as to make money on the betting, has begun. I’ve not heard of doping scandals in cricket, but if it isn’t happening yet I’m sure it eventually will.

Sometimes, when I look at a modern match of cricket, I wish we could go back to the old ways. Cricket seemed so much nicer back then.

Of course, my memory has quietly deleted those much less pleasant memories of cricket, on a nasty windy day, for instance, or under the rain; it really was not as wonderful as I’d sometimes like to think it was. 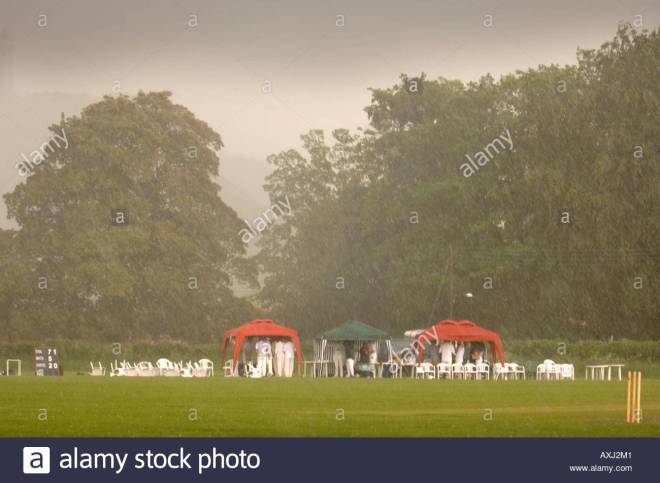 And anyway we can’t go back. The world has changed, and so must cricket.

I’m sure much the same nostalgia drives many of my countrymen and women who want to vote to leave the EU. They want to go back to the past, to a time when Britain was great, was self-reliant … and was white. But paraphrasing Karl Marx, history repeats itself, the first time as tragedy, the second time as farce. Britain’s past history was not necessarily a tragedy, but it wasn’t as glorious as some people might think. My family did well out of Britain’s industrial revolution and later imperial ambitions, but there are many, many, many British families who suffered enormously from the industrial revolution

and there are a multitude of families in the countries we colonized who suffered enormously from our imperial ambitions.

As for Britain’s future, trying to go back to its, largely mythical, past will simply condemn the country to be a poor, foggy little island on the outer edges of Europe, which itself is turning into the frazzled outer edge of a renascent Eurasian continent. Britain’s future history will not necessarily turn into a farce, but it will be trivial. With no manufacturing sector to speak of, sacrificed decades ago to the financial services sector, and with no financial services sector to speak of, since an exit from the EU will all make them emigrate to Frankfurt, Britain, like Italy, will have to rely more and more on tourism to make ends meet. It will become one vast Disneyworld

welcoming hordes of foreign tourists to its shores, to watch – for five minutes – its quaint games of cricket, visit a quaint pub, watch the Queen or King inspect all those nice toy soldiers with their lovely scarlet tunics and tall, funny hats

and send their children to spend a year in one of its quaint universities getting a costly but ultimately meaningless Master’s degrees.

Let’s not make this our future.

Well, my (very modest) call to remain fell on deaf ears. By midday today (Bangkok time), it was clear that a majority of my country men and women had decided to leave the EU. A pity.

2 thoughts on “LET’S NOT LEAVE THE EU”