This morning, I walked along the opposite side of the canal to go to work. I wanted to see what someone had written into the snow that thinly covers the ice. I took a photo. Readers interested in seeing it are referred to the postscript I have just added to my post “Clear, Pure, Clean, Peaceful”.

It so happens that a path has been cleared in the snow next to the script, which carries to the other side of the canal. Many people take a short cut across the ice to the other side. I hesitated. Crossing across the canal would shorten my walk to the office somewhat. But crossing ice like that always makes me a little nervous. Decades ago, when I was fourteen, I had ventured out onto a frozen lake where the ice got progressively thinner from one side to the other. As I trotted across, the ice began to creak and crack ominously. I beat a hasty retreat and all was well, but sometimes – especially if I venture onto iced-up water bodies – the sound of that creaky-cracking comes back to me; stuff of nightmares. So I hesitated.

I finally decided it was alright and set off across the canal. The cleared ice was very transparent, although the view through it was bent and warped by the unevenness of the ice. As I looked down through the ice, I saw a multitude of bubbles, of all shapes and sizes, ghostly white, trapped in the ice. Perhaps it was the slight trepidation I felt as I walked over the ice, but suddenly it seemed to me that I was seeing the last bubbles of air exhaled by a host of people who had got trapped under the ice. I half expected to suddenly see the ethereal face of some drowned person looking up at me through the ice.

I reached the other side. Silliness … I shook the feeling off. But as I turned around to survey the canal, I remembered a shard of T.S. Eliot’s poem. The Wasteland.

Phlebas the Phoenician, a fortnight dead,
Forgot the cry of gulls, and the deep sea swell
And the profit and loss.
A current under sea
Picked his bones in whispers. As he rose and fell
He passed the stages of his age and youth
Entering the whirlpool.
Gentile or Jew
O you who turn the wheel and look to windward,
Consider Phlebas, who was once handsome and tall as you.

Readers of my posts will know that I walk along a piece of canal on my way to and from the office. During these walks, I watch how the change of seasons are reflected – literally and figuratively – in the waters of the canal and the willows that grow along its edge. This year, winter came flurrying in with a blustery storm in late November which damaged a number of the willows along the canal.

Then came a snowstorm, which left a modest covering of snow and which quickly disappeared. Thereafter, the temperatures plunged and the canal froze over. With no snow, the ice was initially buffed clean by the wind, but the wind soon died down and over a period of a week or so a thin layer of dust settled on the ice’s surface; winter is very dry in Beijing. One morning, as I turned off the bridge to start my walk along the canal, I noticed faintly etched in the dust a Chinese character. I was intrigued. What had been written? A name? Two names, united in love? Or something stupid like “Wash me”? Or worse?! Given my illiteracy in Chinese, I had no idea. So I took a photo.

I showed it to my Chinese secretary. She studied the photo a minute and said “it says, qīng.”

And what does it mean, I asked?

Clear, pure, clean, peaceful … The writer must have been feeling good when he wrote it. Was it love? Just a happy moment? Whatever it was, I thank him. Later wind has effaced the character, but every time I walk past the spot I get a warm feeling.

Since writing this, snow has fallen and has covered the canal’s ice with a thin coating of snow.  Someone went out and wrote in the snow. This one I could read:

I am lucky enough to live so close to work that I can walk to the office in the mornings and back in the evenings. It’s the first time I’ve been able to do this in the 30-some years I have been working. I can even go home for lunch!

The walk is that much more pleasant because most of it is along a canal. Many of the canals in Beijing are sorry affairs, either dry or filled with pestilential water. This is true for this canal too, except for the stretch I walk along. For some reason, this reach of the canal has been thoughtfully developed. Willows have been planted along the edge, reed beds too; a small reed island has been formed in the middle; during the spring irises, first blue then yellow, come and go; and a bed of lotuses has been planted.

I treasure that morning walk. It puts my heart at peace and allows me to face the slings and arrows of the day with fortitude. And I am not the only one. From spring to autumn, the edges of the canal are sprinkled with fishermen (and sometimes fisherwomen), meditating on the state of the world and catching a small fish from time to time. In summer, some of the older inhabitants from the nearby apartment blocks sally forth and swim slowly up, down, and across the canal.

Two autumns ago, we woke up to find that my piece of the canal was being emptied. After a brief period where mudlarks waded through the resulting black sludge picking up stranded fish and other strange things, excavators arrived, dug a large trench down the middle of the canal’s bottom, and then a swarm of migrant workers appeared to lay down a large plastic pipe – a sewer line, I would guess. What has taken me two lines to recount, it took the pipe layers a dreary six months to accomplish. But finally, the pipe was covered and silence returned. But not the water. And we waited. Another six months passed. I was terribly afraid that the canal would disappear, that they would fill it in and build a road.

But at last the water reappeared. And slowly, the old canal-side rhythms came back, and my walks to and from the office once again soothed my harried soul. But I was worried about the lotuses. I was worried that the long drought would have killed them. When we left for our vacation there was no sign of them. On my first walk to the office after coming back, I looked out anxiously for them. And they were there, flowering already, their delicate pinks and whites standing out against the dark matte green of their leaves. And all was right in the world. 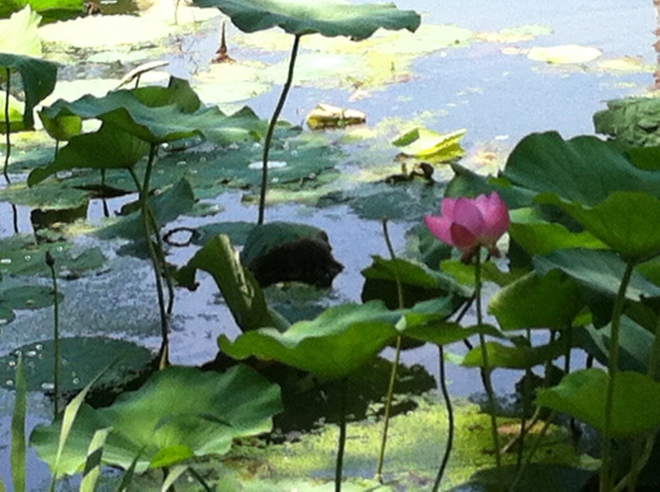