I have mentioned in an earlier post that I had to visit the Shanghai Expo from time to time when it was on. “Had to” is the operative phrase: I was there for work and got no joy in being there. On one of my visits with my more important Boss, we were given the VIP visit of China’s pavilion. I confess immediately to remembering nothing – but then I don’t remember anything of any of the pavilions which I visited. My one memory of the visit is of one of our party who lost his wife in the pavilion. We left him sitting disconsolately at the exit waiting for Wife to appear (I heard later that having got separated from us she had left by another exit).

But my wife and I were now visiting the pavilion (with me telling her to stay close …) in its new guise, as the China Art Museum. It was an interesting visit: not fantastic, not five stars, but interesting. The collection is certainly huge; we thanked the Lord that looming closing time gave us an excuse to go faster and faster towards the end, skimming along. Even so, we didn’t finish. Another reason to go back to Shanghai, I suppose.

Starting from the top, the logic behind the flow of the visit seems to be:

2.      China also tries out the new Western ways (oils versus watercolour, many colours versus the traditional monochrome or at least no more than two tones, impressionism);

3.      China also enthusiastically adopts some of the more low-brow forms of Western art, especially advertising and calendars, as well as animated cartoons;

4.      But China also tries out wood cuts, turning out among other things some dark political commentaries – signs of the gathering storm;

5.      The New China triumphs and artists turn to social realism to support and teach the Revolutionary Masses, often using the traditional models in a new guise;

Here are some photos I took – not as many as I would have liked, because there was a no-photo rule, with people in each room walking around to enforce it. I have to say it was a rule more honoured in the breach by many of the Chinese visitors, and many of the enforcers seemed to take their duties very lightly. But from this point of view I am an old-fashioned Englishman: a rule is a rule and I feel guilty and uncomfortable breaking it. My wife, now, is very Italian in this respect: rules are merely to be treated as guidelines. Thinking about it, the Italians have affinities with the Chinese on this point, whereas the English are more like the Japanese. But I digress.

best painting in the whole collection

“Pink Pills for Pale People” – I love it. 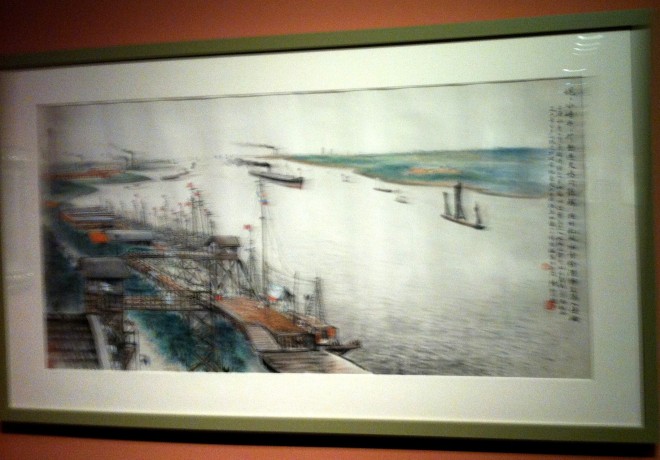 rather blurred; the enforcer of no-photos was stricter in this room.

a modern painting, part of a triptych, telling the story of some famous revolutionary. If we understood the captions in this section of the museum correctly, this was part of a government programme to immortalize in paint various Great Moments or Great People from the Glorious Past. This particular painting caught well the idea of painting memories, already beginning to fade, already beginning to blur. There were several in this style.

another modern painting of some Great Moment in which, judging from the soldiers’ uniforms, the Brits were involved. I liked the cartoonish style.

The caption was more interesting than the painting.

This seems a natural follow-on to the earlier wood-cuts

Of course, life never follows neat patterns, and the museum’s exhibits were no exception. Here, in no particular order, are some paintings we came across during our tour which don’t seem to fit the 6-phase approach I’ve outlined above:

very amusing depiction of the subway 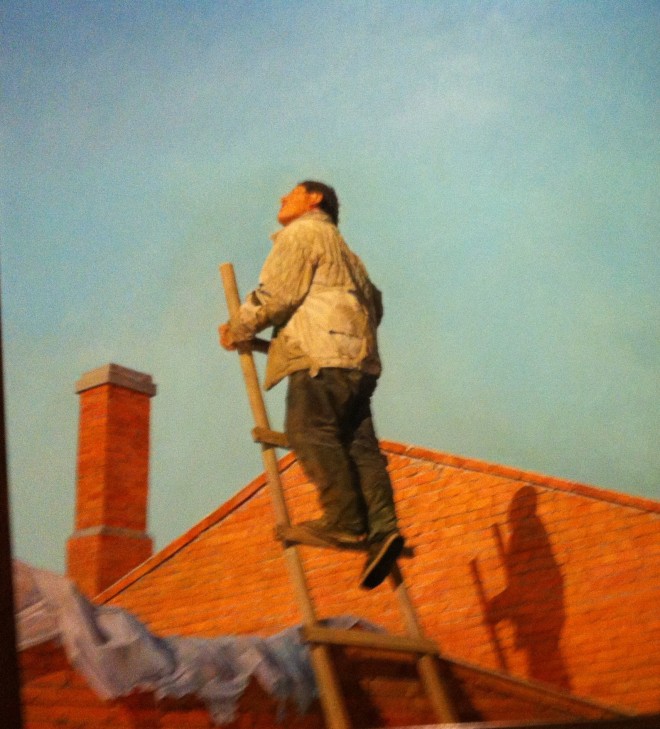 The collector is rather “dark”. I wonder if that’s what the sculptor wanted. Had he had some run-ins with collectors?

wonderful watercolour; it captures the spirit of the man beautifully

A timeless vision of mother and daughter, in modern garb.

Given her weightlessness, I thought she was reading Milan Kundera’s “Unbearable Lightness of Being”. But according to the caption she was reading Gabriel Garcia Marquez’s “One Hundred Years of Solitude” …

A painting of generations. I rather like the idea that our parents are intently looking on from behind our shoulders.

How come they have two children? … 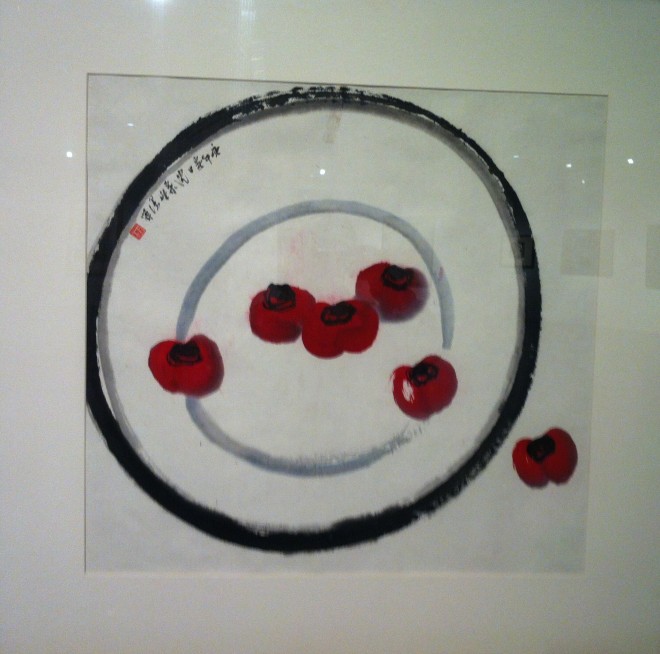 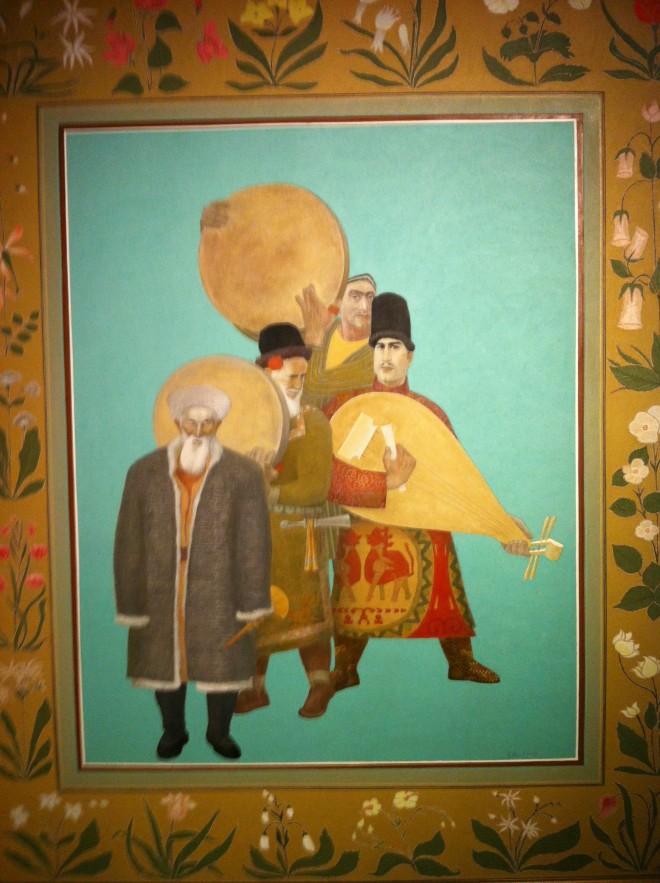 What strikes me about the whole collection is the complete absence of any abstract art. In the whole museum I came across only two exhibits which could claim to be abstract, two small pre-WWII wood cuts: 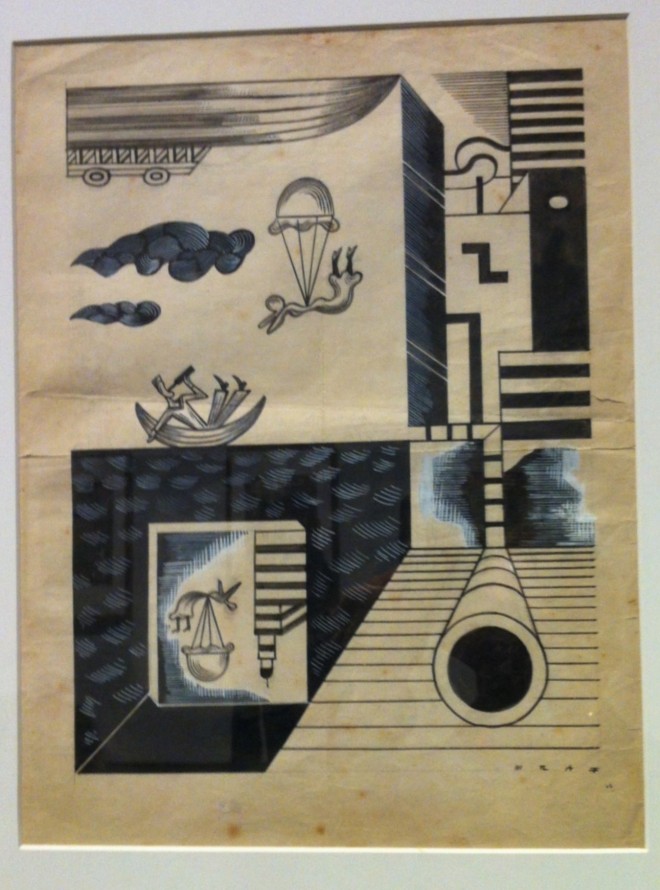 Now, I’m not particularly fond of abstract art, so its absence doesn’t bother me much. But it is strange that the museum’s curators saw fit to exclude such art. And it is not as if there have not been Chinese abstract artists. I don’t know about the pre-war art world, but there have been a number of well-respected Chinese abstract artists since China’s opening up (none, of course, during the Communist period; like in the Soviet Union, social realism was the only approved style). Indeed, at one point Shanghai was a hotbed of abstract art. I can only assume that the Government still disapproves of abstract art. But why?