I’ve just come back to China from a business trip abroad. As is my habit on these trips, I picked up whatever English-language newspapers were being proffered at the plane door. On the return leg, I found myself with the International New York Times (until recently the International Herald Tribune). Once we had taken off, I settled into my usual reading routine, which is to start with the cartoons, have a stab at the Sudoku and sometimes the crossword (depending on how easy it is), then meander through the rest of the newspaper, settling on whatever articles catch my eye. In this particular edition, I came across an article entitled “Letting the Nose Lead the Way”, about the durian. The article was a paean to the durian, the author an unashamed fan. So much of a fan that I decided to write this post in protest and to right the balance.

For those of you who may not be familiar with the durian, this is it:

It is a tropical fruit common throughout Southeast Asia and southern China. A huge fruit which can weigh up to three kilogrammes and whose husk is covered with large nasty spikes. Which two facts together lead some to wear safety helmets if they venture into durian orchards when the fruit is ripe and ready to fall. I kid you not:

which smell and taste absolutely … disgusting.

The first – and last – time I ate durian was in Malaysia in the mid-1990s. I was with a Moroccan colleague. It was the first time for both of us in the country. We were with a third colleague, an Italian, who had been many times to Malaysia. We were driving through some village when he suddenly ordered the driver to stop and us to get out. We were confronted by a roadside vendor behind a pile of these large spiky fruits. We absolutely had to try one, our Italian colleague declared, it was rightly called the king of fruits. The vendor split open the husk, and a nauseous smell hit us.  We hesitated, but he urged us on; get beyond the smell, he cried, the taste is sublime. And all my life I will remember the face of my Moroccan colleague as he bit into that yellow guck, a look of pure horror and utter revulsion. A look which was mirrored in my face as I too bit into the guck. This photo, of a poor kid who has just tried durian for the first time in Indonesia, sums up the experience well.

You don’t have to open the husk to get the smell. It spreads around the unopened fruit like a sickening miasma. So strong is the smell that durians are often prohibited from enclosed public spaces.  I disovered this in Singapore after my trip to Malaysia, where there were prominent signs banning durian from the subway system. 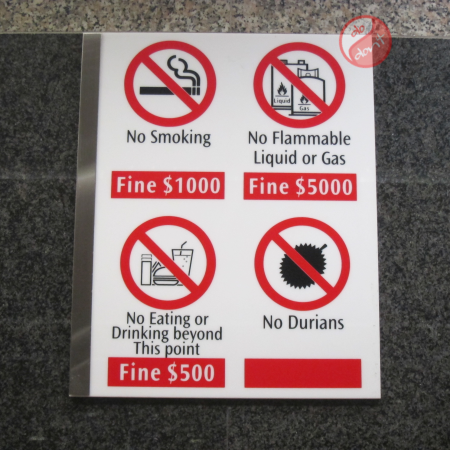 The long list of things you can’t do in Singapore has now become something of a joke, but the ban of durians on the subway is one which I completely and heartily approve of.

If this had been my only experience with tropical fruit in Malaysia, I would have left the country with a permanently bad impression. Luckily, though, my Italian colleague redeemed himself by introducing us to three other tropical fruits (or froo-wits as he called them): the jackfruit, the mangosteen, and the rambutan.

The jackfruit looks uncannily like the durian. The fruit is also large – huge, sometimes – and has a spiky exterior, although nothing like as spiky as the durian

The pods inside are also yellow and squishy 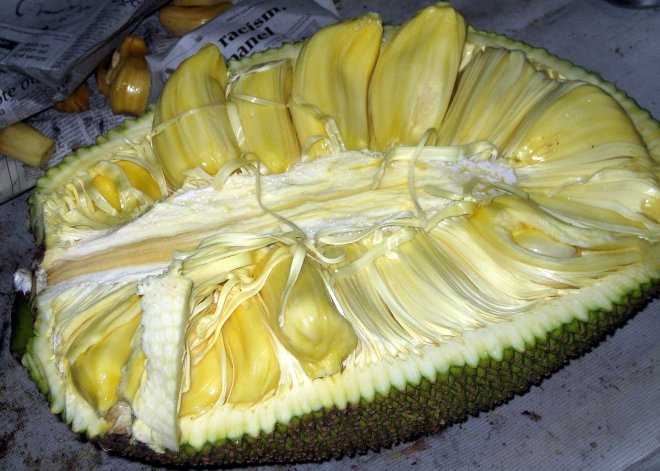 But the taste is a universe away from the durian: a delicate sweetness which lingers in the mouth and urges you on to take the next morsel.

As for the mangosteen, ah, what a fruit! From the outside, it looks something like a large plum but with a hard rind.

When you crack open the rind, you find that it harbours soft, dazzlingly white segments 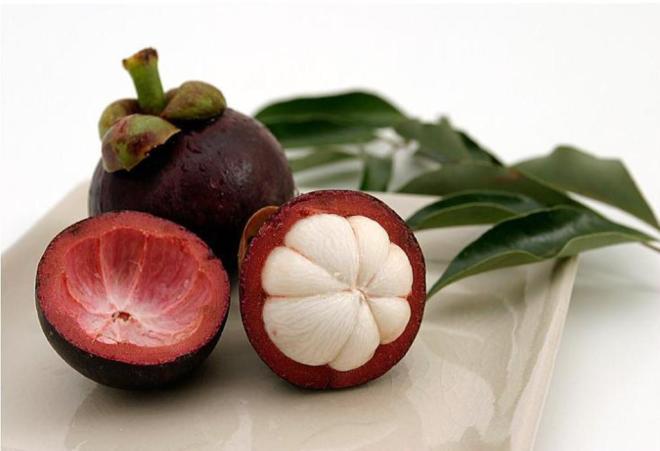 which literally taste divine, something surely that was invented by nature only for the gods to eat: juicy, supremely sweet, yet with an acid overtone that holds the sweetness in check, preventing it from becoming cloying.

And finally the rambutan, a wonderfully hairy looking fruit (reminding me always of a certain part of the male anatomy), growing in clusters on the tree

When the rind is opened, a glistening small white globe is uncovered

with a taste very much like fresh lychee; not surprising, since the two are relatives. I smuggled a batch of rambutans back to my wife (I’m sure I was not allowed to import them), and they tasted as good at our kitchen table in Italy as they had in the market in Malaysia.

There comes a time of year, in autumn, when street vendors in Beijing begin to sell durian. When that sickening smell wafts over me again, I make a wide detour and occupy my mind’s eye, nose and mouth with the wonders of jackfruit, mangosteen and rambutan.

My wife and I have one fundamental difference: I notice people’s looks and she notices people’s characters. One result of this is that after living in a part of the world where everyone has black hair and dark eyes, I have become intensely aware of differences in hair and eye colouring, whereas my wife is quite indifferent to it. So it was that yesterday, when my wife and I were sitting at our favourite café and we found ourselves sitting across from a European expat, I was transfixed by his blue eyes while she didn’t notice. After spending a suitable moment marvelling at the sight, I began to ask myself some questions. Questions which my wife’s iPad, which I commandeered, and the café’s wifi allowed me to find answers to.

Perhaps the most amazing fact is this. Every person in the world with blue eyes (and the closely linked grey and green eyes) has one single, common ancestor! A mutation occurred in some corner of this person’s DNA and that little mutation has been passed on down the generations ever since. Up to that point, the colour of all humans’ eyes had been dark. And then, some ten thousand years ago somewhere in the north-western part of the Black Sea region (geneticists have managed to pinpoint the source that accurately), someone was born with blue eyes.  Can you imagine what that must have been like? Was the person treated as a wonder or as a dangerous freak, I ask myself? I have to think the former, since this person was able to sire children who passed on the mutation.

I suppose blue eyes are most associated with Europe: blondes or the red-heads with blue eyes. 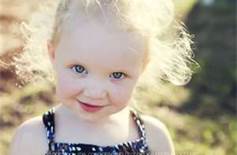 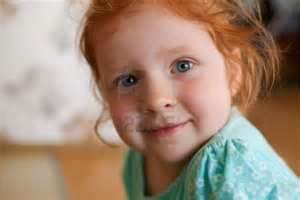 But actually, according to very recent research, the original Ol’ Blue Eyes was probably dark skinned and dark haired. And in fact blue eyes are found everywhere: 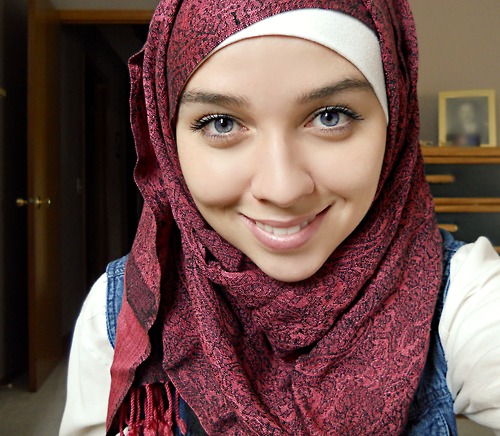 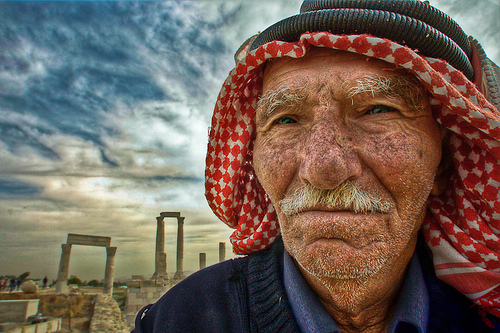 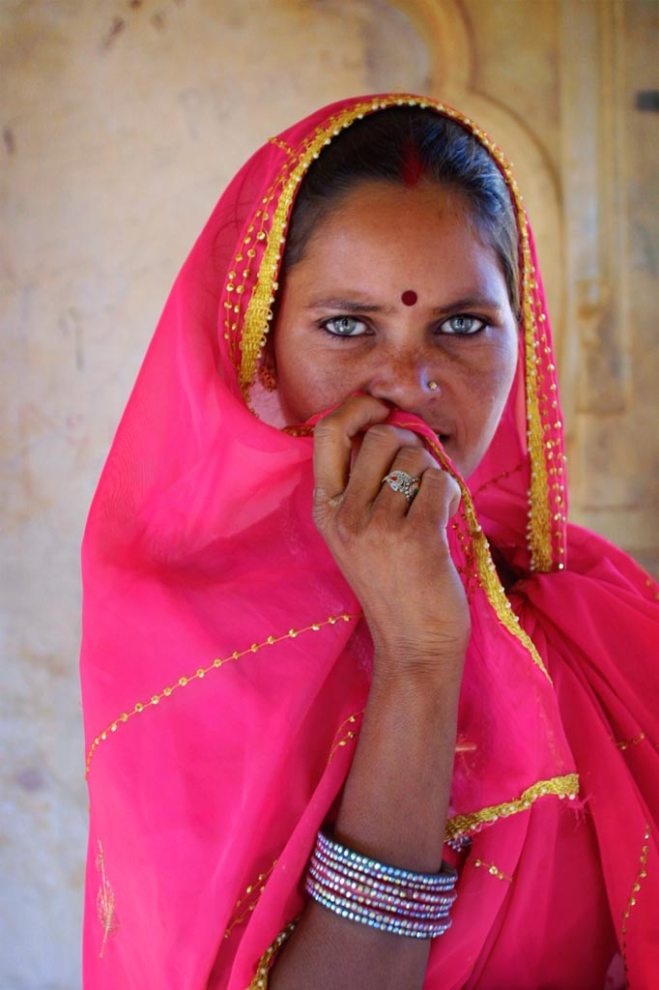 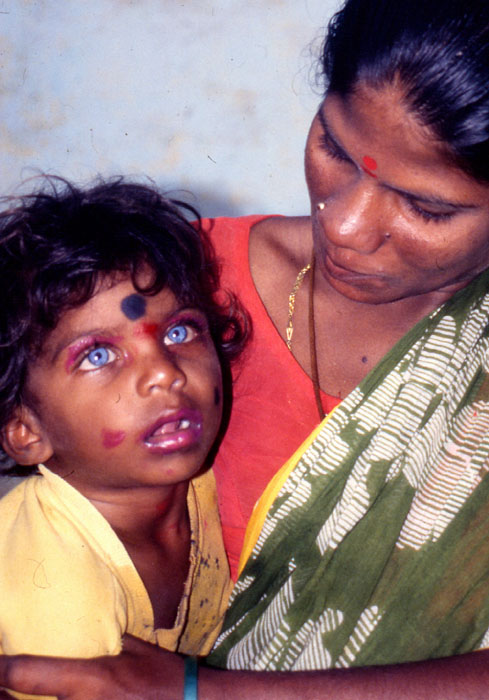 Even China! (although more green than blue) … 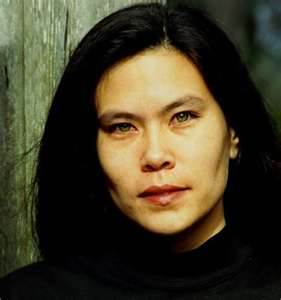 But most basic of all, why are eyes blue? Because the irises lack melanin. It’s melanin which makes the human eye – and skin, and hair – dark. But why aren’t blue eyes colourless then? Because of the same effect that makes the sky blue: “longer wavelengths of light tend to be absorbed by the dark underlying epithelium, while shorter wavelengths are reflected and undergo Rayleigh scattering in the turbid medium of the stroma. This is the same frequency-dependence of scattering that accounts for the blue appearance of the sky” (1). So eyes are blue because the sky is blue. Now how cool is that …