Last year, I marked the annual migration which my wife and I make from Austria to Italy with a post celebrating the autumn crocuses which we saw sprinkled across the meadows we were crossing on our last walks around Vienna.

So this year, when on our first walk back in Italy – we came down from Austria a few days ago – I spotted a profusion of yellow crocuses it seemed to me that they would be an excellent topic for my first post of the winter season in Italy.

As it turned out, there was a slight hiccup in this plan. I have just discovered that the plants are not crocuses. They look terribly like them, as this photo demonstrates (the purple plant is a real crocus). But they are not.

A number of the plant’s common names make the same mistake. For instance, one of the plant’s common names in English is yellow autumn crocus, as it is in French (crocus jaune d’automne). But actually the plant is more closely related to the daffodil than it is to the crocus. And in fact a couple of the common English names refer to the daffodil – autumn daffodil, winter daffodil – although I suspect that this has more to do with the plant’s daffodil-yellow colour than with any botanical relationships. I don’t want to use these names because I really see nothing daffodil-like in the plant (apart from the colour). The plant’s official name is Sternbergia lutea, but I don’t want to use that, it makes me sound like a stuffy old bore. After looking around at what various (European) languages call the plant, I think I shall plump for the German Herbst-Goldbecher, Autumn Golden Cup.

So now let me celebrate the Autumn Golden Cup with a couple of photos of it by  photographers who are way better than me at taking photos.

For anyone who might be interested, this map shows the geographic distribution of the Autumn Golden Cup.

The plant is native from Spain through to the southern shores of the Caspian Sea (and it’s been naturalized for quite a while in France, Morocco and Algeria). These photos of the Autumn Golden Cup show it in a rather more natural setting, the first in an old olive grove in southern Greece, the second on some stony ground in southern Italy.

There is only one dark cloud in all of this. The Autumn Golden Cup is one of a handful of plants whose bulbs are made commercially available mostly through collection in the wild rather than through artificial propagation. This has put terrible pressure on wild populations. In my last post, I wrote about the problem of species being moved to new ecosystems and running amok. Here we have the problem of over-exploitation of native populations, leading – if we are not careful – to their extinction in the wild. The situation for the Autumn Golden Cup is sufficiently worrisome that it has been listed in the global Convention on International Trade in Endangered Species (CITES) as a species that can only be traded internationally with the proper permits. The problem is that many of the countries where this bulb harvesting is going on have weak enforcement authorities, so the trade is not being managed as it should.

What I don’t understand in all of this is why the Autumn Golden Cup cannot be propagated, as happens with the great majority of bulbous plants. Some efforts are being made to teach farmers in Turkey, for instance, to do just this. But why don’t Italian farmers, where the species is native, also do it? My rather uncharitable thought is that everyone has pretty much left bulb propagation and sale to the Netherlands (those tulips, you know …), which as a result controls the great majority of the trade in flower bulbs. It so happens, my thinking continues, that since the Netherlands falls outside the geographic range of the Autumn Golden Cup it has never bothered to get into the business of propagating this particular plant. And so we are left with harvesting in the wild.

Well, I just hope that we can change this situation before it’s too late.

Once, after I’d made a speech in Bangkok about how the world was going to hell in a hand basket, with multiple environmental disasters awaiting us, I was asked by the MC (who clearly had no idea what to say to me) what I most missed in Thailand. The seasons, I replied: winter, spring, summer, autumn. It was indeed one of the few things I missed in Bangkok from my European heritage; I always felt that South-East Asia was seasonal monotony. It was either hot or hotter, with rain added from time to time.

Now that I’m back in Europe, I can enjoy the four seasons again. Right now, in a masochistic sort of way, I’m enjoying the tail-end of the winter season: ah, that cold north wind which causes you to pull your head and shoulders into your coat like a turtle into its shell … But here on the Ligurian coast, located in its own warm microclimate, we already have signs that spring is on its way! As we have been walking the hills, there have been signs all around us that Nature is getting ready to burst forth again, like in Botticelli’s Spring. 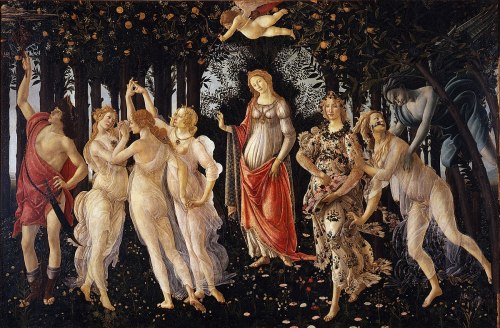 We have the mimosa trees, whose festival it will soon be

the almond trees, seen here on a walk in the Cinque Terre

the crocuses, in the shady underforest 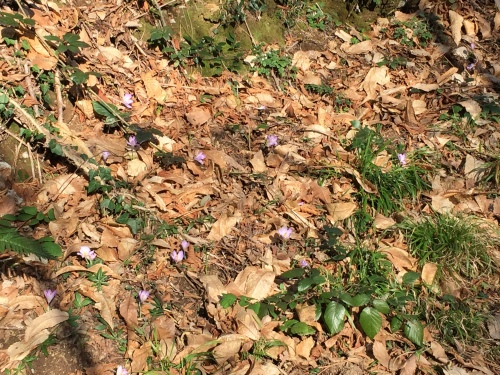 a lone primrose, also spied on the sun-speckled forest floor

carpets of a yellow flower, to me unknown, bedecking the sides of the paths open to the sun 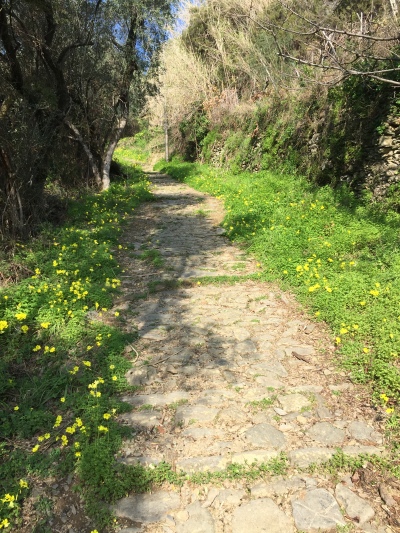 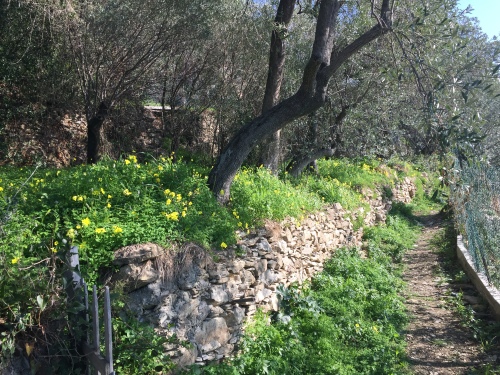 bushes of rosemary growing from out of the rocks

purple irises, not a flower I connect with early spring

a humble little mauve flower, growing at the foot of olive trees 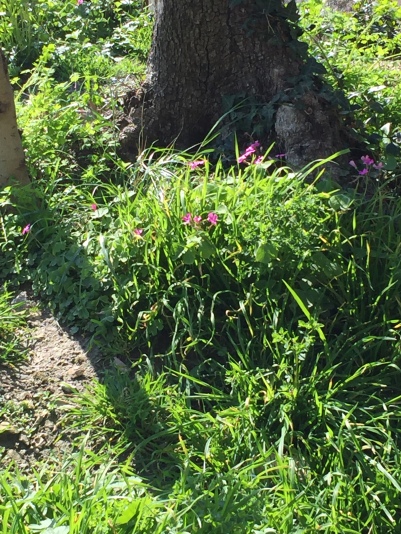 even a bright yellow fungus, returning a dead log to the earth from whence it came.

Yes, nothing so lovely as the Earth bursting into life. No wonder the poets have often sung about spring! Here’s a poem by Gerald Manley Hopkins, entitled simply Spring:

Nothing is so beautiful as Spring –
When weeds, in wheels, shoot long and lovely and lush;
Thrush’s eggs look little low heavens, and thrush
Through the echoing timber does so rinse and wring
The ear, it strikes like lightnings to hear him sing;
The glassy peartree leaves and blooms, they brush
The descending blue; that blue is all in a rush
With richness; the racing lambs too have fair their fling.

What is all this juice and all this joy?
A strain of the earth’s sweet being in the beginning
In Eden garden. – Have, get, before it cloy,
Before it cloud, Christ, lord, and sour with sinning,
Innocent mind and Mayday in girl and boy,
Most, O maid’s child, thy choice and worthy the winning.