Last year, I marked the annual migration which my wife and I make from Austria to Italy with a post celebrating the autumn crocuses which we saw sprinkled across the meadows we were crossing on our last walks around Vienna.

So this year, when on our first walk back in Italy – we came down from Austria a few days ago – I spotted a profusion of yellow crocuses it seemed to me that they would be an excellent topic for my first post of the winter season in Italy.

As it turned out, there was a slight hiccup in this plan. I have just discovered that the plants are not crocuses. They look terribly like them, as this photo demonstrates (the purple plant is a real crocus). But they are not.

A number of the plant’s common names make the same mistake. For instance, one of the plant’s common names in English is yellow autumn crocus, as it is in French (crocus jaune d’automne). But actually the plant is more closely related to the daffodil than it is to the crocus. And in fact a couple of the common English names refer to the daffodil – autumn daffodil, winter daffodil – although I suspect that this has more to do with the plant’s daffodil-yellow colour than with any botanical relationships. I don’t want to use these names because I really see nothing daffodil-like in the plant (apart from the colour). The plant’s official name is Sternbergia lutea, but I don’t want to use that, it makes me sound like a stuffy old bore. After looking around at what various (European) languages call the plant, I think I shall plump for the German Herbst-Goldbecher, Autumn Golden Cup.

So now let me celebrate the Autumn Golden Cup with a couple of photos of it by  photographers who are way better than me at taking photos.

For anyone who might be interested, this map shows the geographic distribution of the Autumn Golden Cup.

The plant is native from Spain through to the southern shores of the Caspian Sea (and it’s been naturalized for quite a while in France, Morocco and Algeria). These photos of the Autumn Golden Cup show it in a rather more natural setting, the first in an old olive grove in southern Greece, the second on some stony ground in southern Italy.

There is only one dark cloud in all of this. The Autumn Golden Cup is one of a handful of plants whose bulbs are made commercially available mostly through collection in the wild rather than through artificial propagation. This has put terrible pressure on wild populations. In my last post, I wrote about the problem of species being moved to new ecosystems and running amok. Here we have the problem of over-exploitation of native populations, leading – if we are not careful – to their extinction in the wild. The situation for the Autumn Golden Cup is sufficiently worrisome that it has been listed in the global Convention on International Trade in Endangered Species (CITES) as a species that can only be traded internationally with the proper permits. The problem is that many of the countries where this bulb harvesting is going on have weak enforcement authorities, so the trade is not being managed as it should.

What I don’t understand in all of this is why the Autumn Golden Cup cannot be propagated, as happens with the great majority of bulbous plants. Some efforts are being made to teach farmers in Turkey, for instance, to do just this. But why don’t Italian farmers, where the species is native, also do it? My rather uncharitable thought is that everyone has pretty much left bulb propagation and sale to the Netherlands (those tulips, you know …), which as a result controls the great majority of the trade in flower bulbs. It so happens, my thinking continues, that since the Netherlands falls outside the geographic range of the Autumn Golden Cup it has never bothered to get into the business of propagating this particular plant. And so we are left with harvesting in the wild.

Well, I just hope that we can change this situation before it’s too late.

I have a fondness for trees. The memories of my life are punctuated by pictures of particularly splendid specimens I have come across: a copper beech in Somerset, a poplar in a suburb somewhere, a grove of beeches in the Vienna woods, the plane trees I mentioned in an earlier posting, an oak tree on the grounds of some historic house, sequoias in California, … When I was a boy, there was nothing I liked better than to climb a tree and be high up amongst its rustling leaves; there was always a feeling of wonderful remoteness up there. I don’t climb trees any more, as much for my dignity as for my stiff limbs, but I do love standing under them looking at the way the sunlight filters through their leaves creating an infinity of green hues – my wife gently mocks me for the tons of photos I have squirreled away of “sunlight through the leaves” – or running my hands over the bark.  And there is nothing so wonderful as being outside at night in the dark and listening to the wind sighing through the trees.

This fondness of mine does not extend to pine trees. Yes, I can admire a lone umbrella pine on a rocky outcrop that plunges into the Mediterranean, but up close pine trees do not excite me in the same way that other trees do. It’s perhaps their generally more somber hue, or because the needles repel the touch rather than encourage it in the way leaves do, or the fact that sunlight doesn’t filter through the needles in the same way. Whatever it is, I am not a fan of pine trees.

This coolness of mine towards the genus pinus has been somewhat modified since my arrival in China, where I discovered, in Beijing’s parks and other public spaces, the pinus bungeana, or lacebark pine. This pine has a truly lovely bark. In the first place, it is smooth, unlike the rough, often heavily fissured, and really quite ugly, bark of the pine trees that I’m familiar with. It is also a bark that peels, like the eucalyptus or the plane tree. But the bark doesn’t hang off in unseemly strips as it can on these trees. It comes off in smaller, rounder, scale-like patches. And what is most wonderful is the colour of the underlying skin: white or pale yellow, green, brown, red-purple. It seems that the initial colour is pale but it darkens upon exposure to light. A grove of them can be a particularly lovely sight. 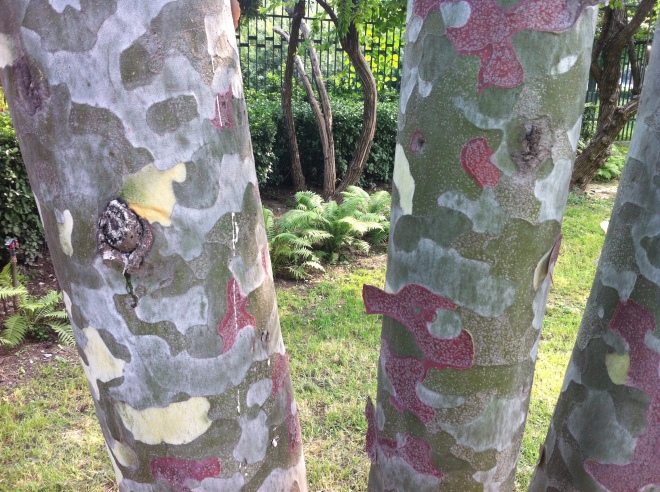 Spurred by my discovery, I read up on the lacebark pine. It is a native of northeastern and central China, which goes some way to explaining why I had never seen it before coming to this part of the world. It also has two cousins with the same smooth, multi-coloured bark. One is the Chilgoza Pine, or the Pinus gerardiana to give it its formal title, which is native to the northwestern Himalayas: northwest India, Pakistan, eastern Afghanistan.

Unfortunately, the species is under threat from excessive cutting and intensive grazing. The other cousin, the Qiaojia Pine, or Pinus squamata, is in even worse shape. It is the rarest pine species of the world, considered critically endangered, with only about 20 known trees in a single locality in a remote part of Yunnan province in China.  It was only discovered – by Science at least – thirty years ago, in 1991. I found no picture of the tree, let alone its bark.

I’m always depressed when I hear of species which are in danger of disappearing. Like they say, “extinction is for ever”. In this case, we could be losing some beautiful trees. But that’s a very selfish way of looking at it, based on the thinking that the rest of the world is made for us. Even if we were talking about some revolting insect, it would be a tragedy to lose it. Every species contributes to the fantastically diverse ecosystems around us, which are not only beautiful to look at and be part of but also vital to our own existence. Every loss is the start of a run in the web of life. One day, all those runs will merge into a gaping hole, down which we will all disappear.