A few weeks ago, I went to Chengdu, capital of Sichuan. I was visiting a company that makes an interesting energy conservation technology, details about which I won’t bore you with. I also visited a company that makes graphite electrodes for electric arc furnaces; again, I won’t bore you with details. And of course, as is usual, the local authorities put on a banquet for me, at which I politely ate the local, horribly spicy food (see my earlier rant about spices to know how I feel on this topic). But when all else has faded from my mind, what will remain with me is a visit to the Sanxingdui Museum, some 40 km to the north of Chengdu.

Before going there, I knew nothing about the museum or the historical Ba-Shu culture on which it is based. I was just told that the museum was very interesting and asked if I would like to visit it. If I can, I never disappoint my hosts, and anyway being a bit of a museum rat I’m always glad to visit a museum. So of course I heartily agreed to the proposal.

But I was totally unprepared for what met me when I got there. 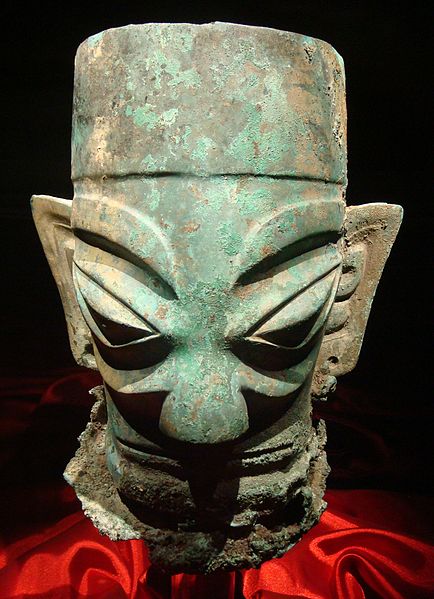 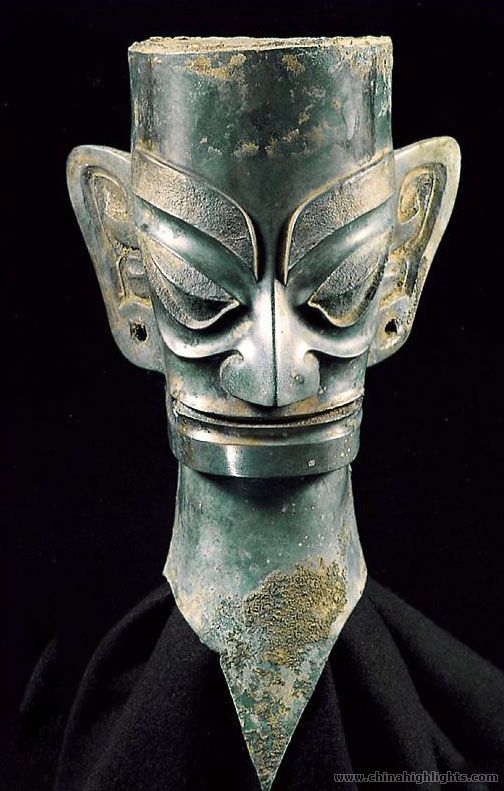 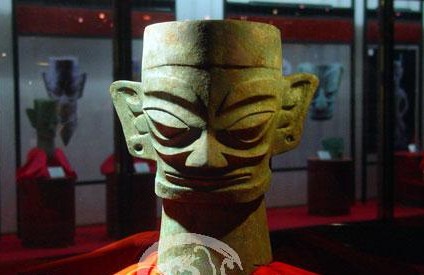 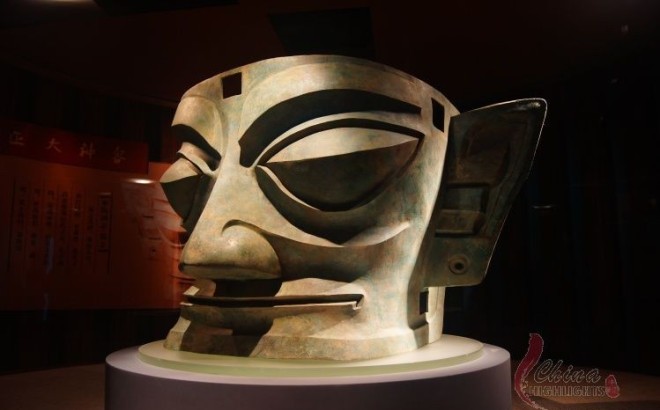 These strange, strange bronze heads, sometimes also in groups and overlain in gold 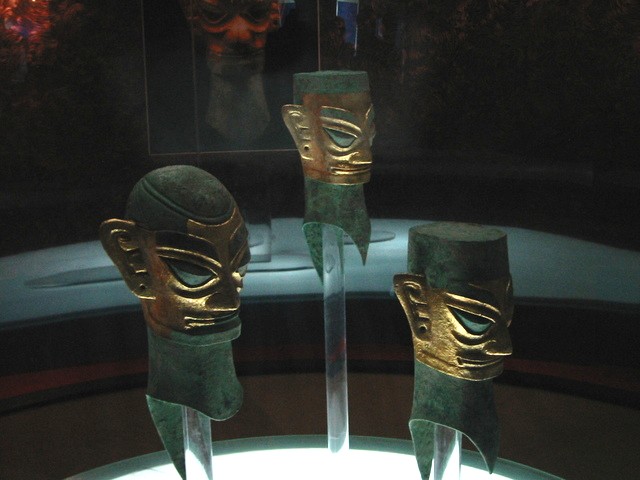 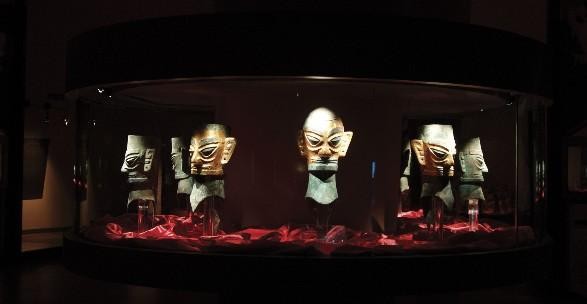 Like this gentleman, I was gobsmacked by these heads 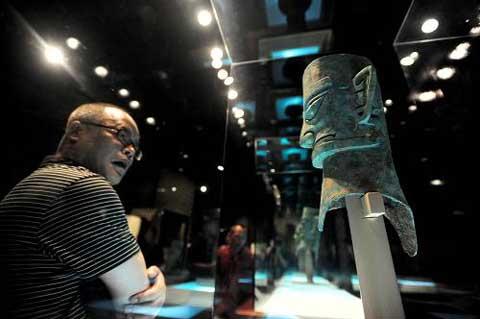 There are other enigmatic heads around the world. Easter Island heads and Olmec heads from Mexico come to mind. 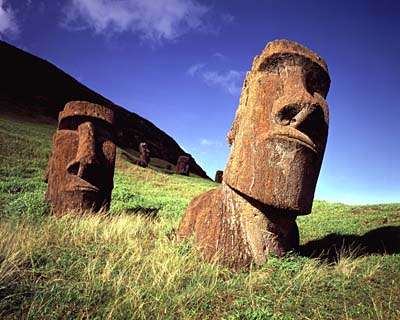 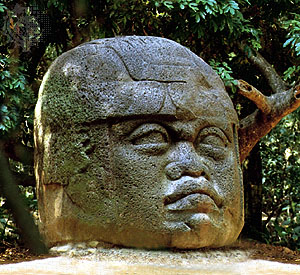 But these Ba-Shu heads take the biscuit. It’s the eyes that are so strange, they’re not human at all. Link that to those thin, thin lips with that slight smile playing on some of them and you have a really sinister-looking face. I have to say that my first reaction was “extraterrestrials!”. Foolish, of course, but I could well imagine a movie where beings looking like this step off the mother ship in front of groveling earthlings.

But it gets stranger. Take a gander at these 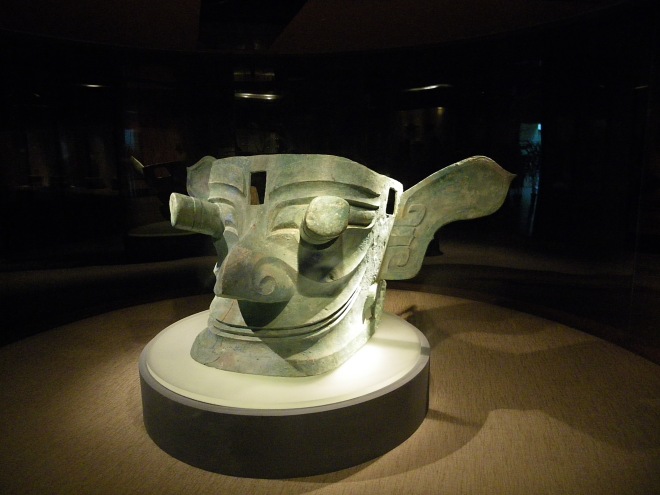 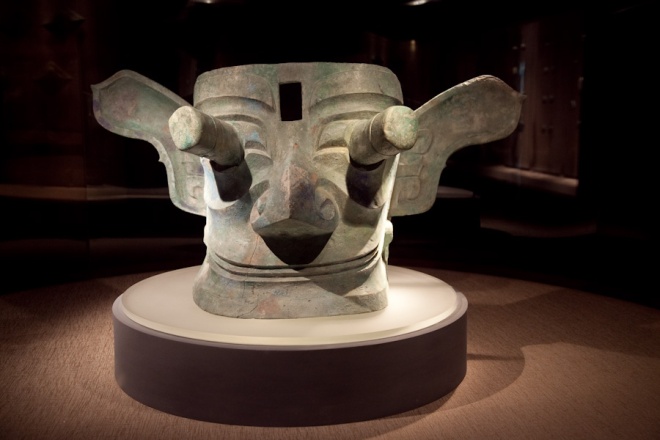 What is one to make of those rods in the eyes? The museum literature suggests that these could be rays emanating from the eyes. To my overheated imagination, they look nothing more like sticks rammed into the being’s eyes and his masochistic delight at this treatment.

For the historically inclined, I should mention that these finds have been dated to a period 3,000 to 4,000 years ago, that for reasons unknown the civilization disappeared from view and from the historical record, only to resurface in 1986 after a farmer was doing some digging in his fields.

Well, it’s clear. The beings decided to go back to wherever they came from, probably after promising that they would be back …

There is a book by a certain Edwin J. Dingle, entitled “Across China on Foot”. It was first published in 1911 and it records a trek which the author undertook in 1909-1910. The title is a little bit of a cheat. Dingle didn’t walk across the whole of China, only 1,600 miles of it, from Chongqing to China’s western border with Myanmar, tracking along Sichuan’s southern border and then across the middle of Yunnan. Before that, he traveled another 1,500 miles, but by boat up the Yangtze River, from Shanghai. He did all of the walking companionless, with only a servant and ever-changing coolies to accompany him. It’s a pretty amazing book, and I highly recommend it to you should you ever come across it.

The book is fascinating on many levels. Most of the regions Dingle walked through were very backward, even by Chinese standards, and he witnessed a China that was almost feudal; some of his descriptions of the practices he saw are eye-opening. The regions he was crossing were really remote, very rugged – in a single day Dingle could climb and descend thousands of feet – but with beautiful, untouched landscapes. His lyrical descriptions of what he was seeing around him make me despair as I look out of my window at the smoggy air of Beijing. He was walking through areas where very few white people had ever been, so he was a phenomenon wherever he went. His descriptions of how the locals reacted to him can be hilarious. And his casual racism – a sort of jokey, imperialistic view of the Chinese – can make you squirm and understand why the Chinese of today have a deep, deep resentment of how they were treated in this period of their history (but it’s not as bad as the blatant racism which Hergé recorded in Tintin’s Le Lotus Bleu – see my previous post on this album).

But actually I’m writing about this book because the regions through which Dingle walked were, and still are, home to many of China’s ethnic minorities. Many of his anthropological descriptions, if I may call them that, are about the variegated ethnic groupings he came across, and they constitute a truly colourful background to Dingle’s walk, in every sense of the word: not only do the customs he describes make for a fascinating read, but the peoples he met often wore colourful costumes.

It is the colour of ethnic costumes that is my topic for today. Last weekend, my wife and I went to the National Art Museum of China to see an exhibition of ceramics. We found no such exhibition; what we stumbled into instead was ten times better. Sometimes serendipity works your way.

It was an exhibition of swaddling clothes (and some dresses), made by many of the same ethnic minorities whose territories Dingle walked across a hundred years ago – the Miao, Buyi, Dong, Shui, Yao, Yi, Gejia, and others. For those of you who have never swaddled, it is the habit of wrapping babies tightly in cloths to restrict their movement. This is neither the time nor the place to discuss swaddling and its merits or drawbacks, but in my part of the world no one has swaddled since the seventeenth century while China’s ethnic minorities were still doing it back in the 1970s. Actually, I’m not sure they were swaddling the way we did it. As I understand it, we wound strips of cloth tightly around a baby. What was on exhibit here, though, were squares of cloth about one metre by one with long belts. My guess is that they were used to make pouch-like holders into which the baby was slipped.

But let me get back to the point of the exhibition, which was not swaddling but the decoration of the swaddling cloths. And the decorations were simply lovely: bright colours, complex patterns, bold combinations. I’m not an expert on the decoration of textiles, but there was a lot of very fine embroidery, there was patchwork, there was printing, there was appliqué, and I’m sure I’ve missed a thousand things.  I shall let the photos speak for themselves. Here are a few, just to whet your appetite! 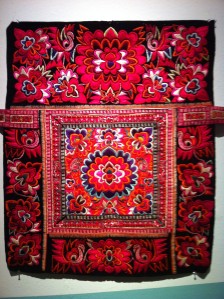 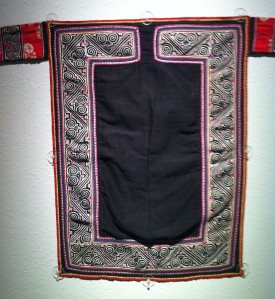 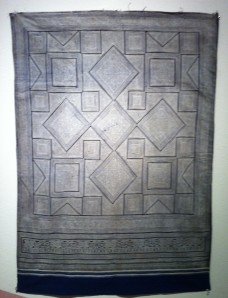 You can see many more at this site.

Just to complete the story, this collection was put together by two dedicated Han Chinese who lived in Guizhou. I record the names of these two wonderful people for posterity: Ma Zhengrong and Ma Li. Over a period of some twenty-thirty years, the two Ma’s “ran around” the province (as the English introduction to the exhibition charmingly put it) collecting these swaddling clothes from the province’s ethnic minorities. They chased their collection over hill and dale – or rather mountain and gorge – up in the back country. All this, while the Great Leap Forward and then the Cultural Revolution raged and burned all around. Somehow they, and their collection, survived unscathed and they have now donated it to the Museum. I salute them.

Like everywhere else these ethnic particularities are disappearing under the onslaught of modernity. Numerous groups around the world are fighting to save this hugely rich cultural heritage that we have accumulated over thousands of years. Like I said in my earlier posting on the Lacebark pine, extinction is for ever; if we lose our cultural heritage it will never, ever come back.

Having smashed everything worthy of the name culture and tried to burn every form of individualism out of their citizens during their Communist period, the Chinese elites are now going at cultural preservation with the enthusiasm of the converted. But is it better than the wanton destruction of before, I wonder? As far as I can make out, the Chinese approach to preservation is to create cultural Disneylands, as one element in their enthusiastic promotion of the tourist industry. What they want is for their ethnic minorities to sit in their prettified villages, dress up in their prettified clothes, and have pictures taken of themselves and their villages by Han Chinese. But that is not what the ethnic minorities want. They, like everyone else, want a modern life, all modcoms. And who are we to deny it to them? Surely the answer is to take their cultural heritage and update it, make it part of all our heritage. They should not embroider swaddling clothes but dresses, shirts, ties, pillows, curtains, sofas. Their beautiful art needs a new, modern context, not the embalming of a tourist village. My wife is looking for a local partner to start getting the great fashion houses of the world into ethnic art. Anyone interested, please post a comment!