Whenever I stayed with my English grandmother in London, one of my tasks was to do the food shopping for her. She expected this service from all her visiting grandchildren, along with other services such as doing the washing-up and hoovering the floors. My grandmother was of a generation that expected grandchildren to serve her and not her to serve them. A lesson, I think, for the Chinese who to my British eye dote far too much on their little princeling children and grandchildren. In any event, my grandmother would write out a detailed shopping list and I would hurry down – no loitering, please – to the nearby high street to buy the necessary. And there they were, all lined up: the fishmonger, with his marble slabs on which were slapped the fish surrounded by ice, the butcher, with his pieces of meat hanging in the window, the baker, with his loaves neatly stacked up behind him, and the green grocer, with all manner of greens in boxes outside as well as in. I would join the polite throng of people, wait my turn – another lesson for the Chinese, many of whom seem not to have heard of the concept of queuing – and paid out in pounds, shillings, and pence.

I went back to that high street a few years ago – a walk down memory lane. All gone, I am sad to report, their place taken by “boutiques”. As I survey high streets around Europe, it seems to me that no-one eats any more, they just dress. What saddened me even more was the disappearance of the tea emporium of which my grandmother had been a faithful client. Buying tea was not a task that she delegated to her grandchildren. It was a job for Grown Ups. But I did accompany her once or twice on her tea-buying expeditions. It was certainly a very majestic place. First of all, it was not a tea shoppe; this was not a place where one came to drink tea and eat cakes and sit about nattering. It was a place to buy tea – and not, God forbid, tea bags, but loose tea. One wall was covered with shelves holding large copper caddies which contained the teas. There was a series of counters in front of this wall, each carrying a set of old-fashioned brass scales, and the employees – all wearing white coats – would bring the caddies to the counter and reverently ladle the teas onto the scales. It was all very hushed and murmury. These photos give a sense of what greeted us when we entered the shop, although these are really altogether too modern and smart. 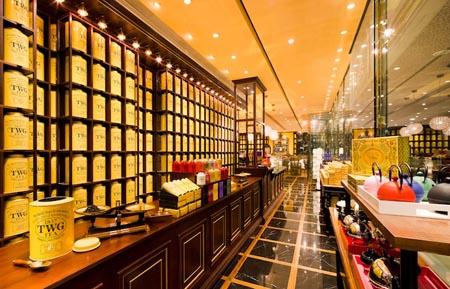 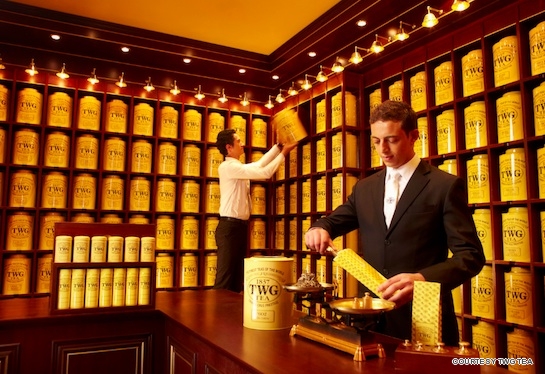 My grandmother bought only one tea – lapsang souchong. This is one of China’s few black teas, some say its first. It comes from the Wuyi region in the southeastern province of Fujian. It has a very distinctive smoky flavour – which is not surprising since the leaves have been smoked over a pinewood fire. 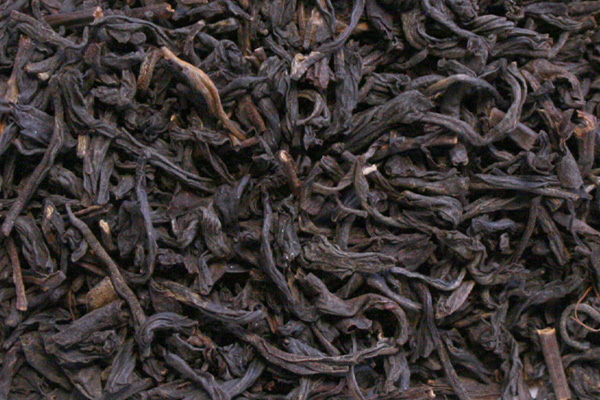 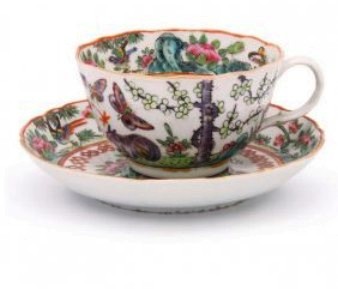 She taught me her ritual for making tea, which I have since discovered was a bastardization of the complicated rituals used in China. First, warm the teapot by swirling boiling water in it, then add the leaves to the teapot and pour in a small amount of boiling water, just enough to cover the leaves. Leave them to soak for three minutes, and then add the remaining boiling water. One thing she did, which would have had all the Chinese tut-tutting into their tea, was to add milk and sugar, a habit which I have gladly embraced.

My wife first met my grandmother over a cup of her lapsang souchong tea. She was flying into Gatwick from Milan the autumn after we started going out together; after a day or two in London, we were going up to Edinburgh University. The plan was for me to meet her at Gatwick. In what was to become a regular feature of our married lives, I missed her. Disconsolate, I came back up to London, only to find wife and grandmother happily ensconced in the living room drinking tea.  My wife took a shine to my grandmother and I believe the feeling was mutual. My wife also took a shine to my grandmother’s tea, and later on, when we finally had some money in our pockets, we started to buy lapsang souchong.  But we have never been as rigid as my grandmother was. We drink lapsang souchong but also quite happily drink Twinings tea bags. And we don’t heat up the teapot before adding the leaves. 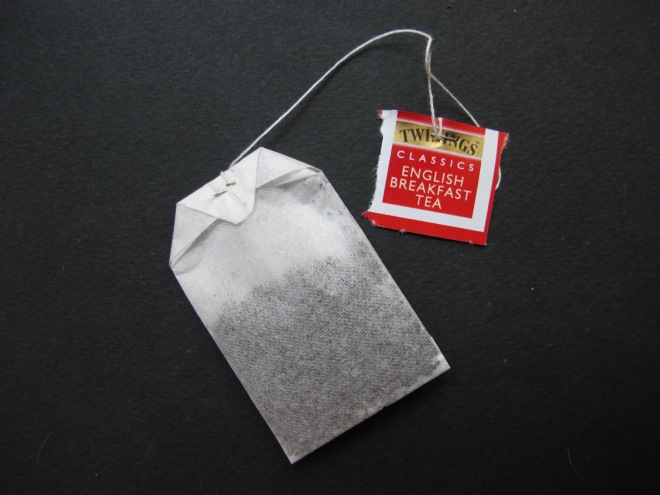 In my very first visit to Beijing, back in 2002, I visited – as was expected of all foreigners – one of the markets. In my case, I visited the pearl market where I actually bought my wife a string of grey freshwater pearls, for the first and probably last time in my life. When I saw a stall selling teas, on a whim I approached them and tried buying lapsang souchong. I mean, what better place to buy Chinese tea than in China, right? But they all looked at me blankly, shook their heads, and muttered “meyo, meyo” [no, no]. So I gave up; it must have been my tone-less pronunciation, I thought. And I had made the cardinal mistake of not bringing with me a piece of paper with the name written on it in Chinese, to show to my interlocutors and thus solve these little problems of tones or lack thereof.

Seven years later, we moved to China. The Empire of Green Tea. 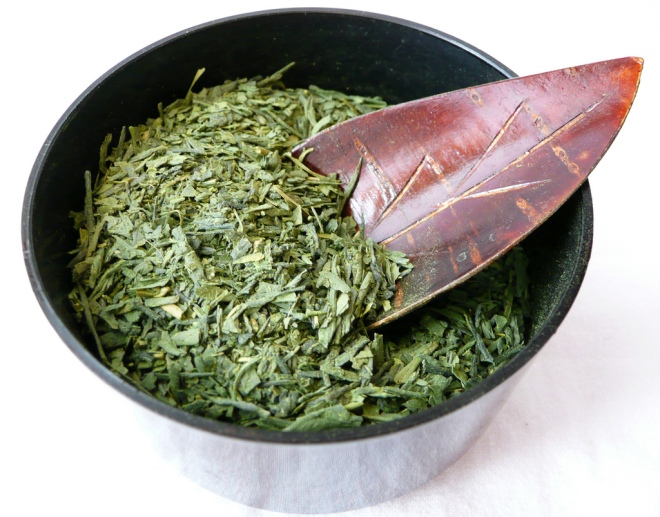 In the face of an ocean of green tea, my wife courageously set about finding a local source of lapsang souchong. Her first step was to visit a street listed in our guidebook as a promising source of tea. She took a pinch of our precious lapsang souchong along with her and went door-to-door showing it. “Meyo, meyo”, was always the answer. But she didn’t come back empty-handed. She bought this lovely stoneware tea caddy. 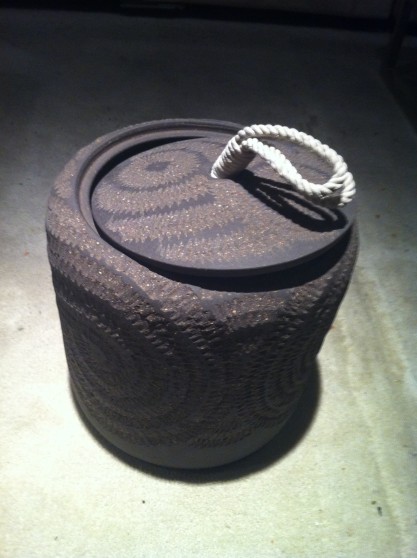 After this rather discouraging start, my wife took a break in the lapsang souchong search. To keep us going, we bought a large stock in Milan during our next visit there, in a little shop we know around the corner, and then in London when we visited our daughter six months later. The next round in the lapsang souchong search started when I found the name written in Chinese on the web. Armed with a piece of paper on which I’d cut and pasted the Chinese name, my wife sallied forth again. Surely that would do the trick, we thought. “Meyo, meyo” was again the discouraging reply.

After yet another pause, we discovered Beijing’s tea market. This time we would succeed! Armed with a bag of lapsang souchong, a piece of paper with the name written in Chinese, and determined smiles, we marched through grand shops 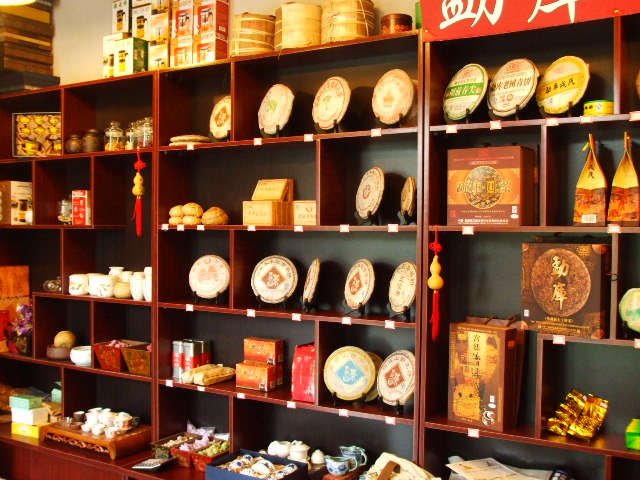 the supermarkets of tea 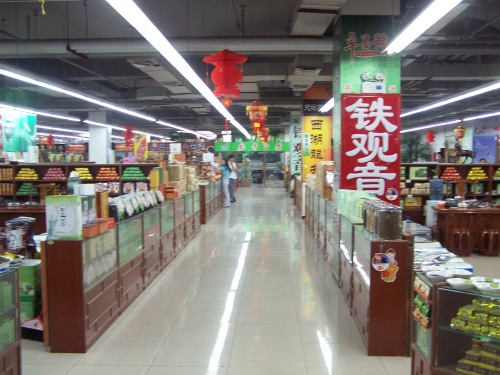 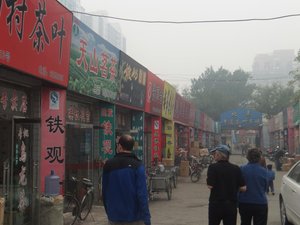 showing everywhere our tea and our piece of paper. “Meyo, meyo” always came back the reply. But still we went on. Finally, a girl in a stall shook her head but made us understand that that shop down the hall there and to the right probably had it. With beating hearts, we made our way to the indicated shop and went through our little routine for the nth time. The two girls looked at us, looked at, felt, and smelled our  tea,  had a rapid-fire discussion, and then one of them went off. The other motioned us to sit down at the tasting table. The first came back with a package, shook some tea leaves out, and the second started the routine of preparing tea. 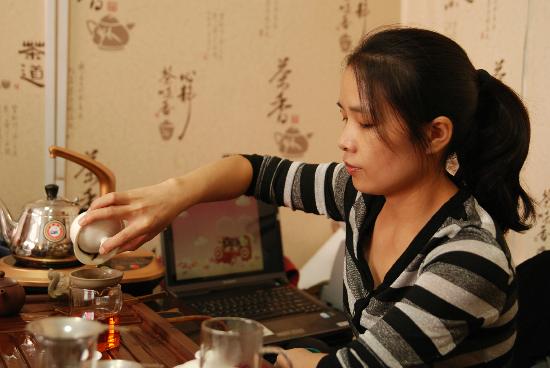 After a little while, she offered my wife a small cup of the tea …

Meyo, meyo! It was, and yet it was not. We tasted it this way and that way, we gave some of ours to the girls so they could make tea with it. We compared. It was clearly of the same family, but it was not the same. Weaker it was, with less punch but also less sweetness.

Ah well, we can just keep stocking up whenever we go back to Europe and maybe, just maybe, before we leave, we’ll find a local source.