Within five minutes of moving into our hotel cabin, we had our first visitor: a chicken.

Naively, I thought the chicken was a friendly thing and wanted company. I decided to call her Bécassine. For those readers who may not know her, Bécassine is the heroine of an old French comic strip. She is what Parisians of the early 1900s would have considered the typically foolish girl from the remote French provinces.

The name fits my chicken well; it’s gross racial typing, of course, but I’ve always thought that chickens are rather foolish birds.

In any event, I was soon disabused of the comforting thought that Bécassine was searching out my company. The way she set her beady eye on anything I was putting in my mouth made me realize that she was just there for the food scraps. I suspect that previous guests staying at the cabin had spoiled Bécassine by feeding her yummy things like bread crumbs. She rushed at the mandarin pips I threw to her but spat them out immediately, fixing me reprovingly with that beady eye of hers.

Apart from these character issues, Bécassine was really a very handsome chicken. One thing I particularly admired about her were her long, graceful legs. Really quite model-like, I felt. And her plumage, though modest compared to some other chickens we saw in the surrounding villages:

(this one reminds me of Audrey Hepburn in My Fair Lady)

her plumage, as I say, was sleek and smooth. A very far cry indeed from the battery chickens which we have been reduced to breeding in the richer countries

so that we can have dirt-cheap eggs and dirt-cheap chicken meat and eventually all look like this.

In fact, Bécassine is a free-range chicken, what they call here a kampong, or village, chicken. And indeed every village we walked through had dozens of kampong chickens, many of the hens with a brood of chicks in tow, ranging through the village and into the fields beyond. With their long legs and rich plumage, they really were very handsome. I do believe that they are not very distant genetically from their wild progenitor, the Red Junglefowl, whose range extends from northern India through South-East Asia and into southern China. 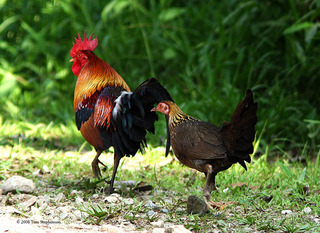 Indeed, the domestication of the chicken took place somewhere around here about 5,000 years ago.

Being free range, Bécassine will no doubt be very good to eat. We didn’t eat her, but in Yogyakarta we had lunch at a restaurant which served typical Indonesian food. One of these was Ayam Goreng Kremes, a fried kampong chicken with fried, flaked salam leaves.

Fingurr-lickin’ good, as the Colonel would say!

Sorry, Bécassine, it’s been good to know you, but you have to follow your destiny. Someone, some day, will have the great pleasure of eating you.