A week or so ago, I was in Cambodia for some official business relating to a project we are about to start there to reduce dioxin emissions. But actually, that is irrelevant to this post. What is relevant is that I was staying in a hotel room half of whose lights were blue. Why, is a mystery. Perhaps it has something to do with the fact that the hotel claimed to also be a spa; perhaps people in spas like the rather cold light that blue creates. Or perhaps it had something to do with the modern furniture that graced the room; it was Nordic-looking in its design, cool, remote, and the blue light made it all that much cooler. But I’m just hazarding guesses here; perhaps blue bulbs were simply the cheapest on the market at the time the hotel was purchasing its light bulbs.

Whatever the reason, this blue light turned me blue. I only realised it when, skyping my wife, I noticed with astonishment that in the small icon which held my image I was a lovely blue hue. Basically, I looked like this fellow: 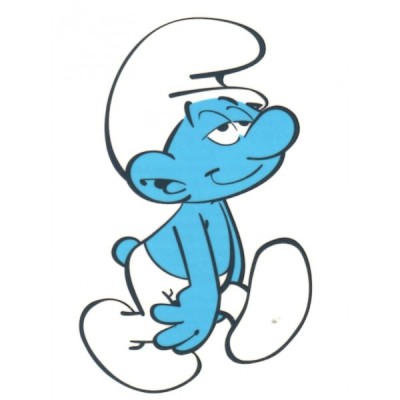 The very youngest amongst us will immediately tell us that he is a Smurf. They are wrong – well, not quite right. He is a Schtroumpf; Smurf is the Dutch translation, adopted later by the English-speaking world.

But here I have to clarify something. My real love was not the Schtroumpfs. It was Johan and Pirlouit, invented some years earlier by Peyo. Johan came first, hustling into the lives of little fellows like me in 1952, before I was even a gleam in my parent’s eyes, in the story Le Châtiment de Basenhau, The Punishment of Basenhau. This was the cover of the album (Johan is the young fellow dressed in ragged brown).

The details of the story are irrelevant. The important point is that Johan lived in the Middle Ages and that he was a dashing young fellow. After Le Châtiment de Basenhau came Le Maître de Roucybeuf, The Master of Roucybeuf, in 1953 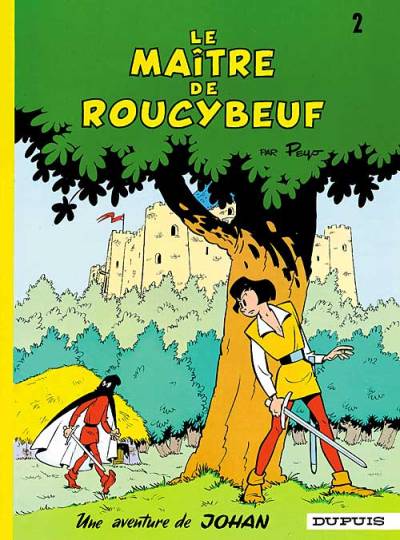 and then in 1954, when my mother was heavily pregnant with me, came Le Lutin du Bois aux Roches, The Imp of Rocks’ Wood, in which Peyo introduced us to Pirlouit, who was to become Johan’s bosom buddy. 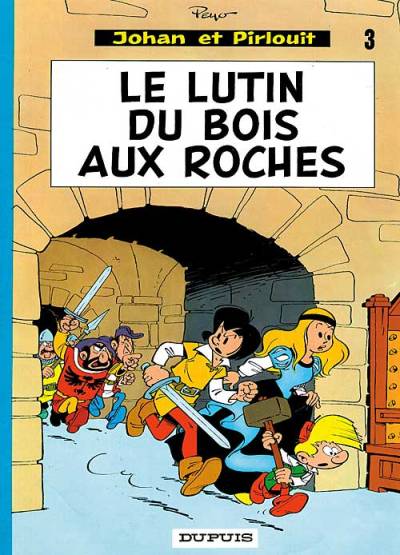 Pirlouit is the little blond-haired fellow holding the very large hammer. While Johan was the serious, Boy Scout type, straight as an arrow, Pirlouit was the joker, a hilarious guy who was always doing silly things. But when push came to shove, he was there by Johan’s side, as they fought off the assorted Medieval baddies they had to deal with. From now on, the two were to be inseparable.

Their stories of derring-do, wielding sword, shield, bow, and other assorted medieval weaponry, galloping through dark, forbidding forests – Johan on a horse, Pirlouit on a goat (he was a little person, remember), dealing with sorcerers and their potions, … these were so thrilling to that young me – I was, what? ten-eleven years old when I discovered these albums, when Peyo was already famous throughout the length and breadth of France. I whiled away many a wonderful summer afternoon at my cousins’ house, tearing my way through the collection: 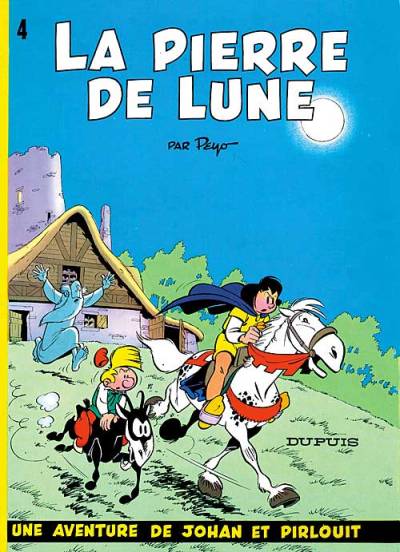 Le Serment des Vikings, The Oath of the Vikings 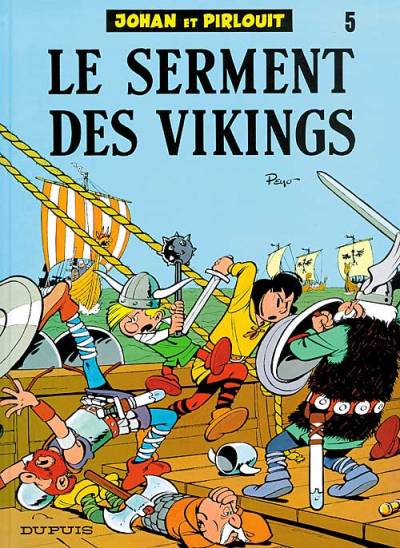 La Source des Dieux, The Spring of the Gods 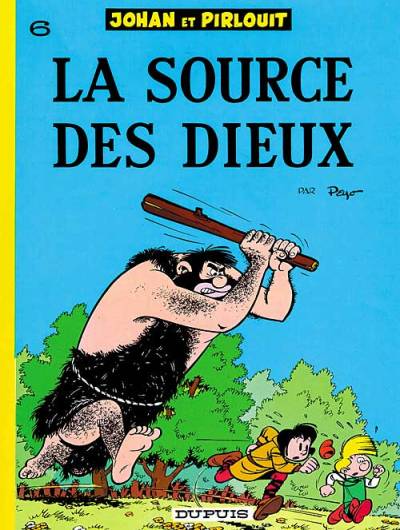 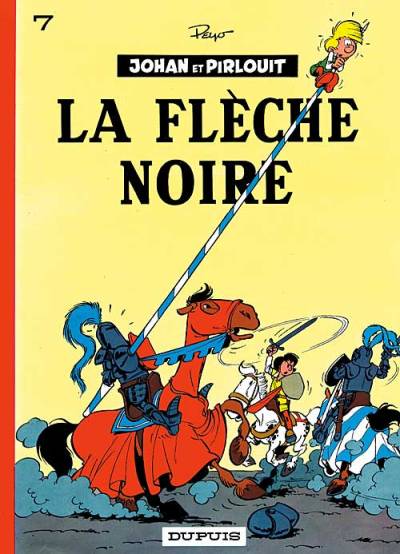 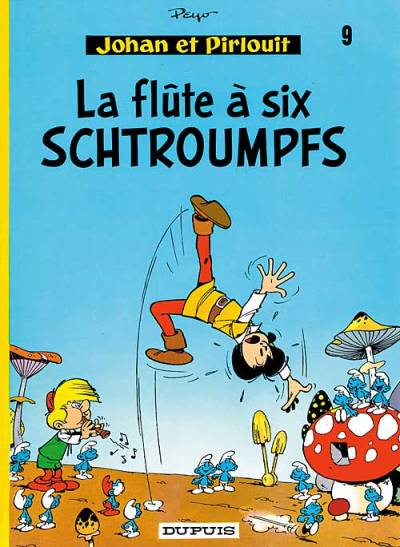 This is where the Schtroumpfs first made their entry onto the world stage. And this is where I start to cry.

Understand me, the Schtroumpfs were nice enough, they added a fun element to the story. But in my view they were minor characters. It was Johan and Pirlouit who were firmly centre stage.

Alas! I was in a minority. The junior readers of Spirou magazine – the stories originally came out in serialized format – wrote letters to the magazine enthusing about the little Schtroumpfs. The editors of the magazine, and Peyo himself, saw the commercial possibilities. And so Peyo took the first steps down the slippery slope. He started with minor albums of Schtroumpf stories. He graduated to major albums. He got involved in animated films. First, in Belgium. Then in the US. Then the breakfast cereal companies came knocking on the door: they wanted Schtroumpf statuettes in the Cornflake packages.

And after that the advertising firms came knocking at the door, asking to use the Schtroumpfs in various advertising campaigns. As this photo shows, the demand from advertizers continues unabated. 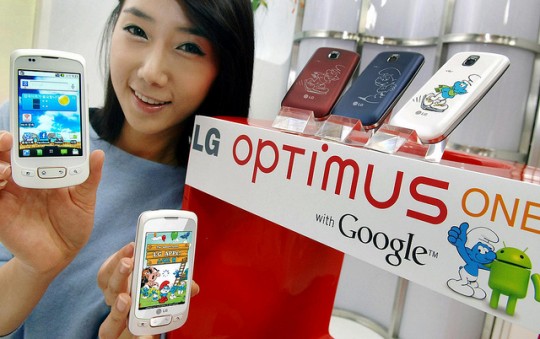 Peyo always said yes. And John and Pirlouit disappeared; he was too busy with the Schtroumpfs. Peyo managed one more great album, La Guerre des 7 Fontaines, the War of the 7 Fountains.

To me, it was his best, a wonderful story of Fall and Redemption. After that, he managed only a few more albums, pale copies of what had come before. The Schtroumpfs had eaten up his life. He had his first heart attack when he was 41, his last when he was 64.

And I am left with the memories of my youth, those golden afternoons in the France of the early ’60s, with medieval jousts and battles echoing faintly across the fields.