As my wife and I wandered around Mexico City this last week, we were struck by these strange ornaments which we saw hanging in many places. This particular one, for instance, was hanging in a street somewhere

while this one, somewhat incongruously, swung over the cars in a gas station. 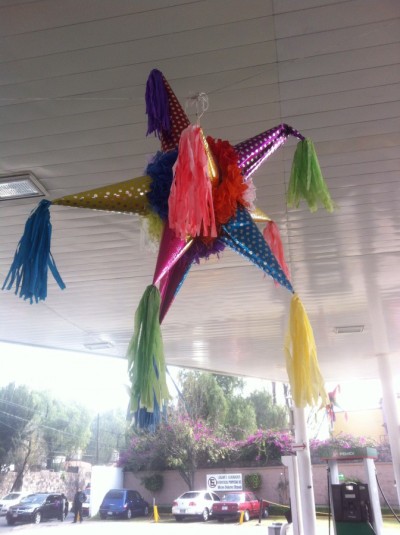 Intrigued, I asked our son what they were. Piñata, he told us.

Ah. I had never heard of them.

Undeterred, I rolled up my sleeves and did some research (i.e., browsed the web). I am now ready to report my findings.

What we have here is an example of the strategy used by the Catholic church in the early years of the Spanish conquest of Mexico to christianize the local populations. The church adopted, with the necessary adaptations, those local religious traditions which happened to have similarities with Catholic traditions. The thinking was that this would make Catholicism more familiar, more “user friendly” for the local populations, who would therefore convert more readily (and if necessary, a little gentle pressure from the sharp end of a sword could no doubt be used to help along in the decision-making process).

In the case of the piñata, the local religious tradition in question was part of the Aztec festival for their patron god Huitzilopochtli, sun god, god of war, and god of human sacrifice.

The whole of the Aztec month of Panquetzaliztli, which ran from 7 to 26 December in today’s calendar, was dedicated to this festival. The people decorated their homes and trees with paper flags, there were ritual races, processions, dances, songs, prayers, and to top it all off there were human sacrifices.

Only one of the festival’s activities is of interest us here. In it, priests would place a clay pot on a pole in front of the statue of the god. The pot was filled with tiny treasures inside and decorated with colorful feathers outside. The pot would be ritually broken with a stick or club, and the treasures would fall to the feet of the statue as an offering.

It so happened that the Spaniards had a very similar custom, the Dance of the Piñata, which took place during Lent. There, too, a decorated clay pot, the piñata, was suspended and during some kind of dance routine got broken with a stick. Quite what the religious significance of this was is unclear to me, nor do I know if there was anything in the pot.

The canny Franciscan monks who were spearheading the conversion efforts in Mexico (along with Dominicans) figured that they could harness this Lenten custom from Old Spain to a new Christmas custom in New Spain and in so doing help to draw away the indigenous people from their old, “pagan”, “idolatrous”, “devil-worshipping”, etc. religion. They also borrowed from a superficially similar Mayan custom. The Mayans had a game rather like blind man’s buff, where a player was blindfolded, perhaps spun around to disorient him, and then left to try and hit and break a suspended clay pot. No doubt his blundering misses made spectators roar with laughter. Again, I don’t know if there was anything in the pot.

The Franciscans used all these threads to weave together a new, fun custom which the indigenous people were encouraged to practice, in the church grounds no doubt, in the run-up to Christmas. A clay pot, filled with sweets and other goodies, and decorated on the outside, was suspended. The “players” were blindfolded, and guided by the onlookers, would try and bash the pot and release the goodies. If successful, everyone would throw themselves on the goodies. But of course the Franciscans gave the whole thing a religious twist, using the new piñata “game” to inculcate in the locals some Christian catechism. Thus, the clay pot represented Satan, with the outer decorations now transmuted into seven colorful cones or horns representing the seven deadly sins (for those of my readers who have momentarily forgotten which these are, we have, in alphabetical order: envy, gluttony, greed, lust, pride, sloth, and wrath). The outside was made beautiful to remind the viewer that evil is tempting, and the goodies inside the pot represented the temptations of wealth and earthly pleasures. Once the game started, it became a morality play for demonstrating the three theological virtues of Faith, Hope, and Charity. The blindfolded players represented Blind Faith, groping their way towards salvation. The piñata now represented Hope. The onlookers looking up at the hanging piñata were actually gazing towards Heaven, yearning for the salvation that would come from the smashing the pot and the triumph of Faith over Evil. The sweets and other goodies that showered forth now suddenly became the rewards of maintaining the Faith. But everyone shared in the goodies, thus symbolizing Charity. After this dose of religion, it seems to me only correct to include this statue of a Franciscan monk having a bash at a piñata.

If any of the players impatiently waiting to have a go at smashing the pot understood any of these theological subtleties I take my hat off to them. If my own youthful experience of catechism is anything to go by, I would guess that they quietly let the priest blather on about whatever he wanted to blather on about and then they got down to the serious business of having some fun. These two photos, which I took in the Museo de Arte Popular (about which more later in a future post), capture nicely the fun aspect of this religious game. 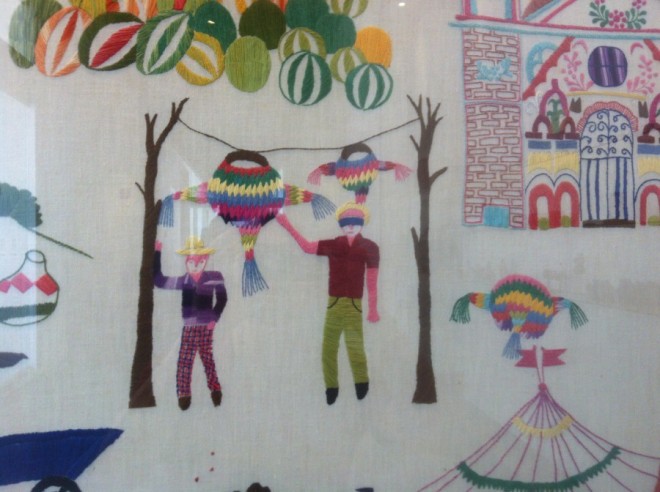 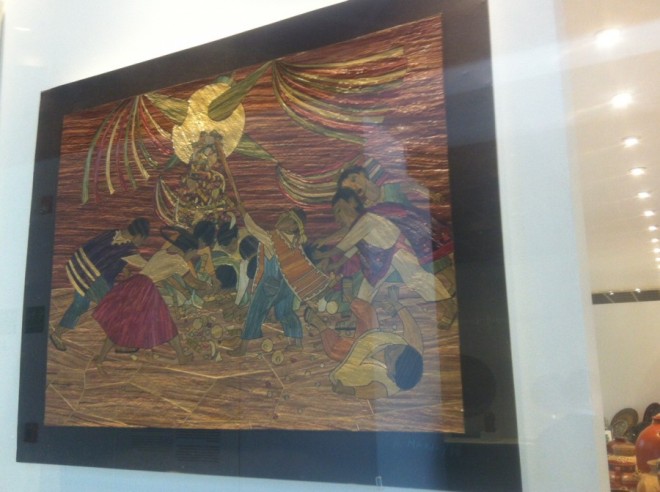 I’m sure it is the jolliness of smashing something and scrambling around for goodies that makes older Mexicans remember piñata with fondness rather than the catalogue of the seven deadly sins and the triumph of Faith over Evil. In fact, at some point it seems to me that the piñata lost much of its religious connotations and simply became a game to play at parties, and at the same time there was a switch from a ceramic pot to hold the goodies to one made of papier-mâché or cardboard – no doubt fond mothers were worried about having their dear ones and those of their neighbors showered with pottery shards during the children’s parties they organized.

Indeed, I have this vague memory of a similar game being played at the birthday party of one of my son’s friends years ago in Italy. By the way, for those of you who like me are fond of useless facts, the Spaniards borrowed the piñata from the Italians, where it was called pignatta. And it seems that the ultimate source of the custom was China, although how it got from the Middle Kingdom to Italy is a bit of a mystery to me (my sources suggest Marco Polo, but he gets mentioned whenever no-one has a good idea how things got transmitted from China to Europe).

In any event, it now looks like the piñata is morphing into a simple Christmas decoration. I certainly don’t think that all the piñatas we’ve seen hung up are there to be bashed vigorously with a stick. In this new identity they have become the equivalent of those stars which seem such a popular Christmas street decoration.

Soon, they will morph once more, becoming tame Christmas tree decorations. Indeed, if this Christmas tree at one of Mexico City’s bus stations is anything to go by, the morphing has started already.

From reverent offering to the sun god to cheesy decoration on a Christmas tree, the fall has been long and hard.