I was doing my favourite thing two Sundays ago, which is to be with my wife, sipping a cappuccino, and reading the weekend section of the Financial Times. My eyes fell on the cookery section, where Rowley Leigh was explaining how to prepare kedgeree.

My mind whirled back 50 years, and suddenly I am a boy again, staying with my English grandmother in London. She is having some guests over to dinner and has prepared kedgeree, one of her signature dishes. She is allowing me to take part in the dinner, and amid the chatter of grown-up conversation around me, I dig into this new dish for me. Ah, the softness of the rice with its buttery taste, overlain by the flavour of strong tasting smoked haddock merging with mild tasting hard-boiled egg. Mmmm … 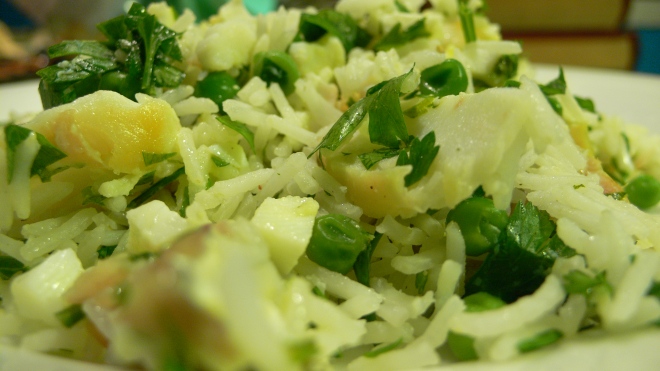 I once asked my sister if she had ever persuaded my grandmother to hand over her kedgeree recipe (my sister is the cook of the family). She had, and she sent it to me by return of electronic post. I printed it off and slipped the sheet into one of my wife’s cookery books, with the intention of trying it one day. Alas, the road to hell is paved with good intentions, as they say.  That piece of paper has never been used and is now lying, along with the cookery book, in a storage space in Vienna, awaiting our return to Europe.

After receiving the recipe from my sister, my curiosity was piqued and I started to do some research on kedgeree. The first thing I discovered was that its culinary roots are in India!  For some reason, I think because my grandmother was always going on about her Norwegian roots (she was half Norwegian) and because the dish had fish in it (the Norwegians are a sea-faring nation, aren’t they? They must all eat fish), it had to be originally Norwegian, with a name like kåjorø or something.

Of course, the rice should have warned me that Norwegian roots were doubtful, but I wasn’t that sagacious when I was young.  Apart from the rice, my grandmother had eliminated all other references to India. For instance, all recipes mention a sauce in which to cook the rice. There is a good deal of disagreement about what should go into this sauce, but they all agree on at least two ingredients. There should be onions, and there should be curry. Well there you go! My grandmother disliked onions – she didn’t like the smell and I think they disagreed with her digestion (as they do with mine and as they did with my father’s – the mystery of genes; I wonder which part of our DNA helix has problems with onions). In addition, my grandmother really, really disliked curry and all spicy spices. It looks like there too I inherited her bit of anti-spice DNA. So it’s not surprising that she ruthlessly eliminated the onions and the curry from her version of kedgeree, along with the medley of other spices which various sources suggest: cardamom, turmeric, cumin, fennel, cloves, cinnamon, nutmeg, mace, … the Spice Islands unfurl before the eyes. So maybe I wasn’t that wrong all those years ago. My grandmother’s kedgeree may not have come from Norway, but it sure ended up looking and tasting Norwegian.

The fascinating thing is to look at the Indian ancestor of kedgeree. The sources all seem to agree on khichdi as the ultimate source, or khichuri to give it what I think is its Bengali pronunciation. A typical recipe goes like this. First, throw out the fish and egg. This seems to have been a British addition (Wikipedia suggests that Bengalis eat their khichuri with fish and/or eggs, but I was able to find no reference to this in other recipes). Second, add lentils to the mix. Because basically, as far as I can make out what we have here is a dal mixed with rice. Third, add vegetables like cauliflower and peas. Cook the lentils, the rice, and the vegetable in the sauce, et voilà! (more or less; I’m cutting details). 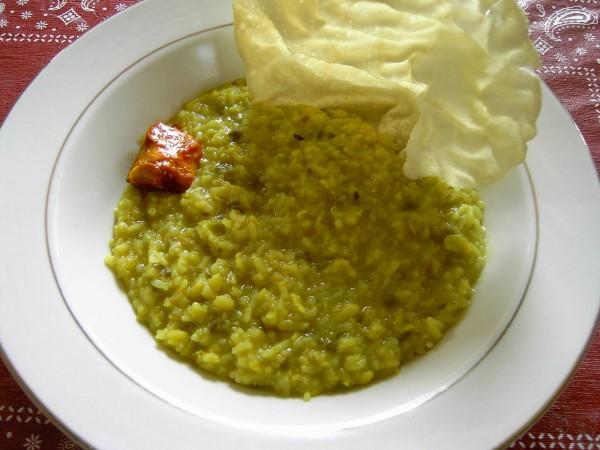 How did this Indian dish mutate into its pale British imitation? I construct the following hypothetical journey – a complete fabrication, I’m sure, but it satisfies my sense of the romantic. I take as true the Wikipedian claim that Bengalis added fish and eggs to their khichuri. So I imagine that khichuri started its journey to kedgeree in Calcutta, among the men of the East India Company.

At the beginning, there were few British women in India to feed the men their British meat and potatoes, and since the men did not cook (of course) their diet went native. So far so good. But here I have recourse to another aspect of khichuri, that it is fed to those who are recovering from sickness or are otherwise generally feeble. And so I imagine that the Indian servants fed khichuri to their East India Company masters who had been felled by one of the many diseases of the Indian subcontinent to which their British constitution was not used and against which they had no defence, natural or pharmaceutical.  Since the British were very often sick (the death rate among the British at the beginning of their rule in India was alarmingly high), they were very often fed khichuri by their Indian servants. Thus was born a love of khichuri among the British men of India.

Now we have to move on some decades, to when sanitary conditions got better and medicines more effective, travel to India quicker, and racist theories about the superiority of the British over the Indians grew stronger. This last factor led from an earlier disapproval of having British women around to a disapproval of having British men – naturally, given the circumstances – consorting with Indian women. British men, it was decreed, should be with British women. The better and quicker travel meant that single (normally dowryless) British women could be brought over by the boatload and married off to the single British men running India. The better sanitary conditions and more effective medicines meant that they didn’t die in droves and had time to set up stable families.

So were born the memsahibs, that army of British women who ran the men who ran India. 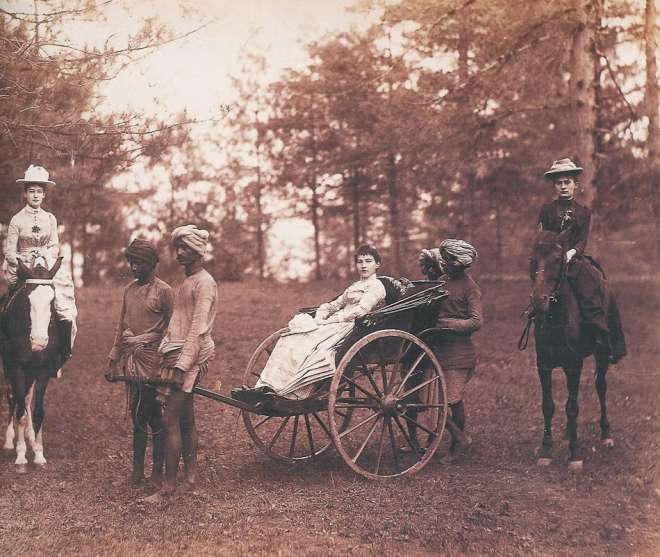 They were the keepers of the flame of Britishness.  Everything became more British and the divide between British and Indians widened and deepened.

Britification included the cuisine, of course. Meat, two veg, and potatoes, along with soggy deserts, became de rigeur, and all things Indian in the kitchen were determinedly stamped out (except the cook, of course; memsahibs did not cook).

But some Indian dishes survived the onslaught and slipped into the mainstream of British food. Chutney was one, although much of the original Indian spiciness and sourness was stripped out in the transition. When I was young chutney seemed as British as cricket.

Mulligatawny soup (Milagu thanni in Tamil) was another, although my Wikipedian sources tell me that the British got confused and gave the name of one soup to the recipe of another; what the Brits eat really should be called Russum soup. 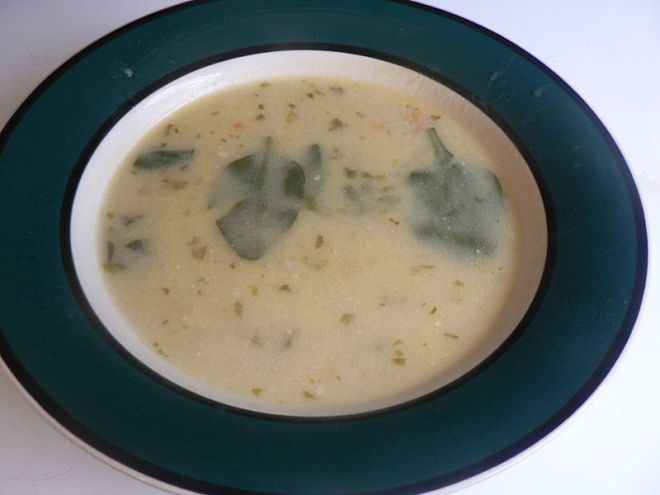 And of course there was khichdi /khichuri/kedgeree.

For some reason, in Anglo-India kedgeree became a breakfast dish, perhaps because fish (in the form of kippers) and eggs were typical ingredients of the British breakfast while the idea of eating rice at breakfast made sense in India. 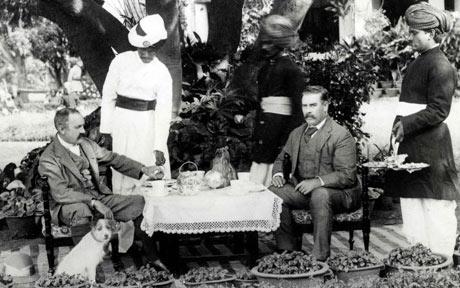 But I have to think that once kedgeree filtered back to the UK proper, the rice content meant that it migrated to the lunch and dinner menus; that’s certainly where my grandmother had it.

Of course, Indian cuisine has had the last laugh. When I was a young, impoverished University student, going to an Indian restaurant was a good option for a night out. The restaurants were slightly dodgy, the sort of places where you weren’t quite sure of the source of the meat on your plate (a story which made the rounds of the student dorms was of an inspection of an Indian restaurant turning up a dead dog in the kitchen’s refrigerator).  But now, as far as I can make out the English themselves are cooking Indian food. My guess is that in another thirty years British cooking won’t exist anymore in Britain. Everyone will eat Indian.