I suppose it’s a sign of old age creeping up on me that I recall with ever greater fondness the memories of my youth, and in this festive season no more so than to Christmases past – here, to get us into the spirit of things, I throw in a picture of Scrooge being visited by the ghost of Christmas Past.

There is one Christmas in particular which comes back vividly to mind.  I must have been six years old, old enough to remember things forever more and young enough for incidents to be deeply impressed into my still malleable brain. I can still see in my mind’s eye the living room of our house in Eritrea – this was probably the last Christmas we spent there; we would be leaving it forever within the coming year. The furniture had been moved around to make room for a Christmas tree in the corner and a nativity scene along the edge of one of the walls. Following the cultural divide in our family, my British father was responsible for the tree while my French mother was responsible for the nativity scene, or crèche as she used to call it. The tree was a source of endless fascination to me, covered as it was with those glittering balls and other baubles. This picture of a Christmas tree from the 1950s captures well the glittering fantasy I beheld.

The balls in particular were a magnet for my little fingers, which was a problem because they were incredibly fragile in those days, made as they were of some very thin, very easily breakable material.  Alas, despite numerous parental warnings to keep out of the living room, I could not resist sneaking in and touching those beautiful balls, with a broken ball and a sore bottom being the inevitable result.

The crèche was an equal source of fascination: the little manger, the figurines of Mary and Joseph, the Mum and Dad to that little baby, Jesus, lying in the hay, the donkey and the cow, very much like the ones I saw when we went for drives in the countryside around the town, the shepherds hanging around the manger, who also looked pretty much like the shepherds I sometimes saw out in the countryside, the angel which hung by a thread over the manger, the three old fellows and a camel who, day by day, were brought closer and closer to the manger until they reached it some time after Christmas … all wonderful stuff. The crèche photographed here has the rough and ready look which ours surely had – in fact, it looks already to be one level above whatever it is that we prepared, although to my innocent eyes ours was a work of art. 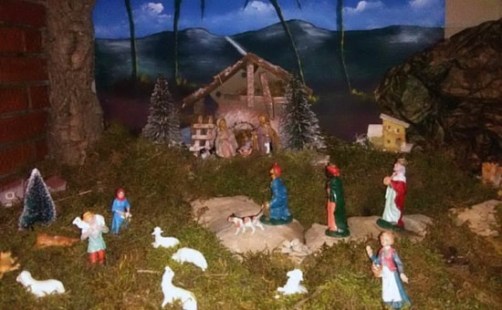 I had little understanding and, frankly, zero interest in the theological profundities which were being exposed before us. What I loved were all those little figurines which we could move around! Our mother made it even more interesting by allowing us to add our own figurines to the mix. I don’t recall what I brought but I remember that my elder brother came with his toy cowboys and indians which he proceeded to hide behind the various trees and bushes dotting the papier-maché landscape.

In all my Christmases Past, I have had a particular fondness for these Christmas trappings, even though for reasons which are now not clear to me the crèche quite quickly dropped away in my parents’ Christmases, leaving only the tree and its baubles. When my Italian wife and I started having our own Christmases the decorated pine tree also dominated, although my wife remembered with great fondness the crèche, or presepe as she calls it, which her father would create when she was young. As she described it to me, it seemed very much like the crèche of my memory, although her father had inserted a pond into the landscape using a mirror and had rigged up a little light driven by a battery which would shine in the star above the manger. Since it was very much my father-in-law’s project, I suppose that after his early death my mother-in-law never had the heart to take the presepe out and set it up, even when our children were young and might have appreciated it. But we took them along to the local churches – every self-respecting Italian church will have a presepe set up in one of the side chapels at Christmas.

This year, as I did my annual trek to the attic to bring down our Christmas tree (made of plastic and reusable; I have to walk my talk, after all, and I can’t stand those piles of dead and dying pine trees on pavements after Christmas), I spied in the corner the box where my mother-in-law had stored the presepe materials, an old box which had once contained a humidifier and which still had her handwritten note on the top of it – a message from the past.

Since it was to be a family Christmas this year, with both our children joining us, I decided on the spur of the moment to set up the presepe. I brought the box down, took everything out, and carried out a general inspection. I decided to drop the pond; I didn’t approve of this novelty. The electrical system was kaput, so I ditched that. The main actors were all there – Jesus, Mary, Joseph, the manger, the ass and the ox, the shepherds and their sheep, the angel, the three Wise Men and their camel. But I was going to need some extra characters, to make up for the cowboys and indians which in my wiser old age I recognized as very incongruous – and anyway I had no cowboy and indian figurines at hand (I had some of my son’s Warhammer figurines in the back of a cupboard, but they would have been even more incongruous).

I decided to check out the greatest of all presepi in Italy, the ones made in Naples, which had brought the art of nativity scenes to heights of splendour. I mean, look at these two! 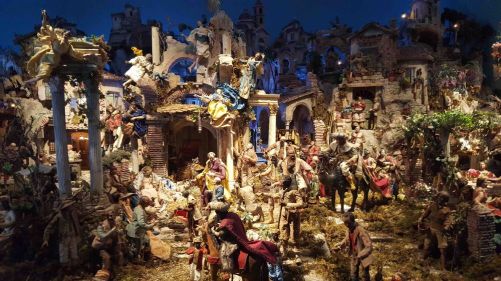 Now that’s what I call nativity scenes worthy of kings! (and queens) Making one was to be my KPI!

A little research informed me that there are a certain number of stock characters in Neapolitan nativity scenes. There is Benino, the sleeping shepherd, a reference to the line in the gospel that the shepherds were out in the fields at night (and therefore presumably snoozing). There is the wine seller, a reference to the Eucharist, but there is also Cicci Bacco, who is a reference to earlier pagan rites. There’s the Fisherman, symbolizing the fisher of souls. Then we have the two pals Unc’ Vicienzo and Unc’ Pascale, personifying Carnival and Death. There’s the Monk, who is meant to symbolize the union between the sacred and the profane in the Neapolitan nativity scene. There’s a Gypsy Girl, whose symbolism is uncertain but who is fun to have around. There’s Stefania, around whom there is an elaborate tale which I will not relate here. There’s the Prostitute, who is there to form a contrast with the purity of the Virgin and who normally is made to hang around outside the tavern – where else? Finally, there are the sellers in the market, one for each month of the year: butcher for January, seller of ricotta or cheese for February, seller of chickens and other birds March, seller of eggs April, a married couple holding a basket of cherries and fruit for May, baker for June, tomato seller July, watermelon seller August, fig seller September, wine seller October, chestnut seller November, fishmonger December.

A rapid comparison of what I had inherited from my in-laws told me that we had a lot of gaps. I had a Benino, a fisherman, a fishmonger, a young girl with a basket who could be one half of the married couple of May, a young girl who could be Stefania. And that was about it. I had a number of other figurines who it seems are not part of the stock players in a Neapolitan nativity scene. There were a couple of figurines of men playing various instruments, maybe referring to a tradition which was still alive – just – when I first came to Italy in the 1970s and which saw men appearing a little before Christmas playing the Lombard equivalent of bagpipes and inviting donations from passers-by for their efforts. There was also a neat little figurine of a fellow making polenta, no doubt part of an effort to defend the honour of northern Italian cuisine. My wife had come across by chance a little shop which sold a medley of figurines for nativity scenes, so we stocked up on a few of our missing characters. We also bought some sheets of coloured paper to use as backdrops, a bag of moss to sprinkle around as generic vegetation, and some little houses to create a nearby Bethlehem.  Then we got to work, my wife on the tree and me on the presepe alla napoletana. The result is not so bad, even if we say so ourselves.

But there is still much to do on the presepe! Luckily, I am a believer in the philosophy of continuous improvement. Next year, we will make our presepe somewhat better, the year after that better still, and on and on. If I’m lucky enough to celebrate many more Christmases Yet to Come we will finally end up with a magnificent Neapolitan-style presepe! – with some tweaks to distinguish ourselves from our southern cousins. 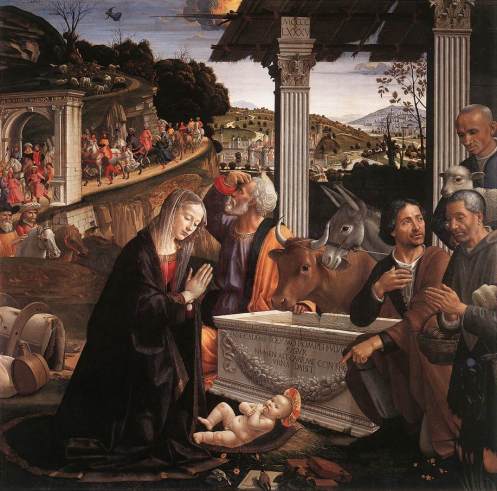