I’m just back from a business trip to Haixi prefecture, which is the remotest prefecture of that remote Chinese province, Qinghai. Squeezed between its better-known neighbours Xinjian, Gansu, Sichuan, and Tibet, Qinghai doesn’t get much press, which is a pity. To my mind, it’s one of China’s most beautiful provinces. Here’s a picture we took out on the grasslands when my wife and I, together with our son, went there a couple of years ago. 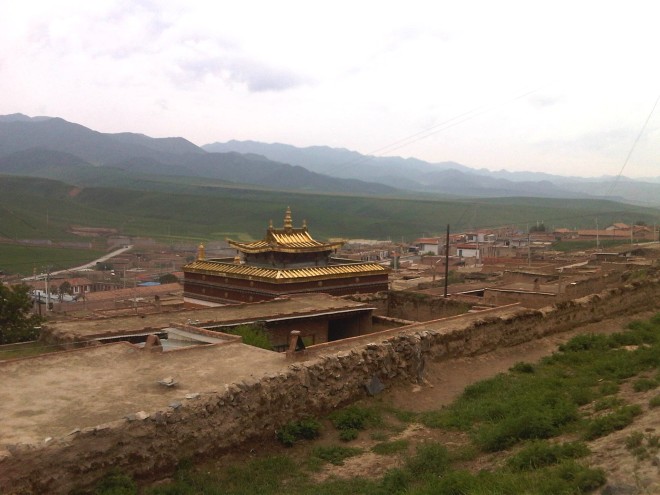 As for Haixi prefecture, it hardly gets a mention at all in the world’s press. This is a great pity, because it’s a seriously beautiful part of the world; on the desertic side, but I like that kind of landscape. 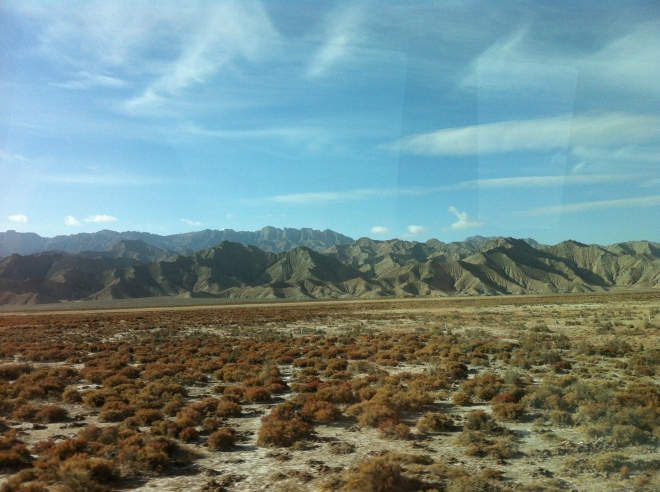 My colleague and I were there to study what we could do to help the prefectural authorities build up a local brand in the organic production of wolfberries (we seem to be getting a reputation for agro-processing). I can perfectly understand it if my readers have never heard of wolfberries. Neither had I until I came to China and found them floating in various soups during banquets. But our ignorance is our loss. Wolfberries have had an honourable place in Chinese cuisine – and traditional medicine – for the last 2,000 years.

If one has seen them at all, it’s probably as dry berries

although this is how we saw them during our trip, fresh

on bushes in plantations

OK, I probably shouldn’t say this, since one of the things the Haixi authorities would like us to help them with is to get fresh wolfberries into supermarkets, but I can’t say that I’m particularly impressed by the wolfberry. If I were standing in the fruit aisle of my local supermarket and had to choose between wolfberries and, say, blueberries, I would choose the latter every time. But hey, I’m not Chinese; they would probably make the opposite decision.

In any case, I will not dwell on the wolfberry, because my attention was captured by something else altogether. Haixi has a lot of sun – 300 days of sun a year, we were told. So quite sensibly, the government has bet on a solar power future for Qinghai. As we drove from wolfberry plantation to wolfberry plantation, and after passing several large photovoltaic arrays, we drew up here: 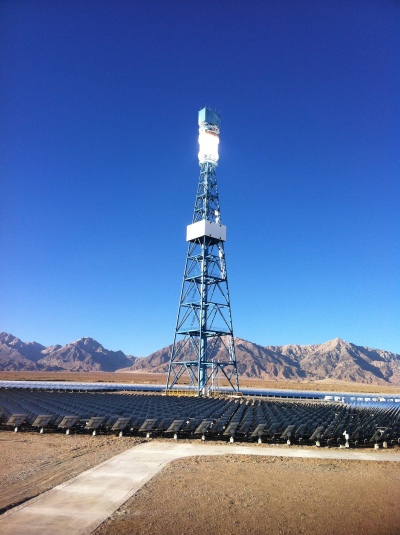 This, my friends, is a concentrated solar power plant (or at least one version of such). The hundreds of mirrors on the ground focus the sun’s rays on the luminous white spot at the top of the column. That spot is a boiler where the heat of the sun turns water into steam, which is then used to generate electricity. I tried to capture the beauty of that ethereally, whitely glowing spot of concentrated solar rays, but my iPhone camera simply wasn’t up to it. So I’ve added the  only other photo I’ve found on the web of this plant.

And I add photos of similar plants in other parts of the world. This one is near Seville in Spain

While this is one was in California’s Mojave desert (it was demolished a few years ago).

Not clear if this approach will ever generate electricity cheaply enough. But who cares, like Concord, another technological has-been

Soon after this brush with the ultra-modern, we came across a picture as ancient as China itself, a line of camels padding slowly into the setting sun. I didn’t get a photo, not with my iPhone, but I show a picture of camels taken elsewhere in Qinghai.

I could have been in Tang China. I am moved to throw in a photo I took back in May in the Museum of the University of Philadelphia of Tang era sculptures of camels. 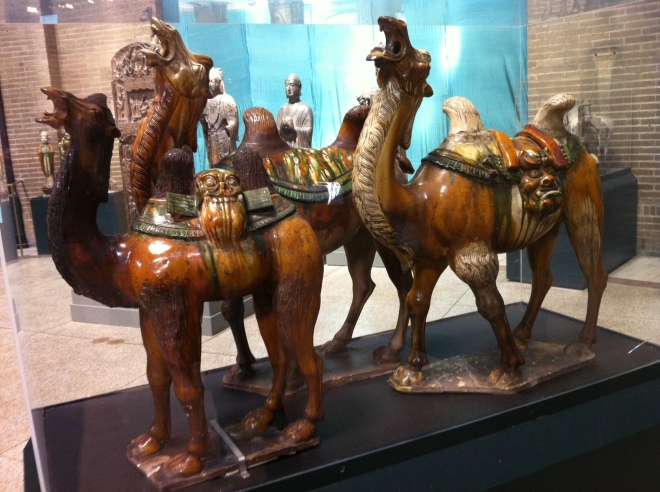 Minutes after this close encounter with the age-old, we drew up at a freshwater lake for a dinner of locally caught crabs. To whet our appetite, we were taken on a short cruise across a magically still mirror of water

as the sun dipped below the hills behind us. 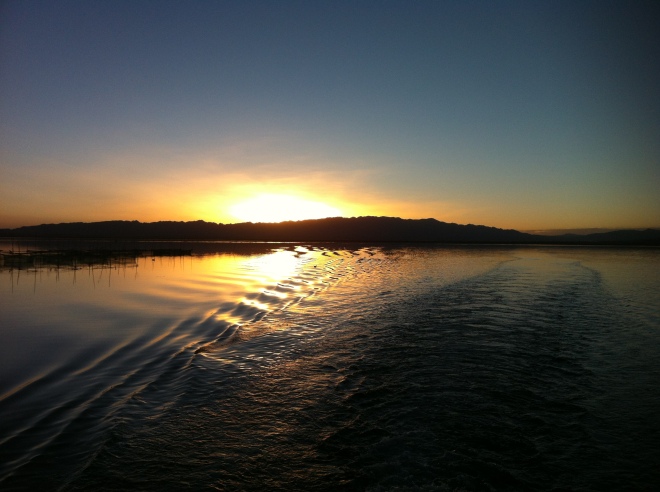