It was our second day in Halong Bay, Vietnam.

We’d climbed up the 173 steps to the Surprise Grotto, we had politely looked at the stalactites and stalagmites (“stalagTites from the Top, stalagMites like a Mountain” had helpfully intoned our guide) and been quite taken by the cave’s ceiling, a tracery of dimples formed by wind and water, a natural flamboyant gothic.

We had climbed back down the 215 steps to the dock, we had puttered back to the boat, and now we were lying on the sunless sun deck waiting to be ferried to our next activity, a bicycle trip to a small village on the island of Cat Ba followed by lunch. All around me, rising sheer out of the water, were cliffs of greying limestone, topped with vegetation which tumbled down to the water’s edge. 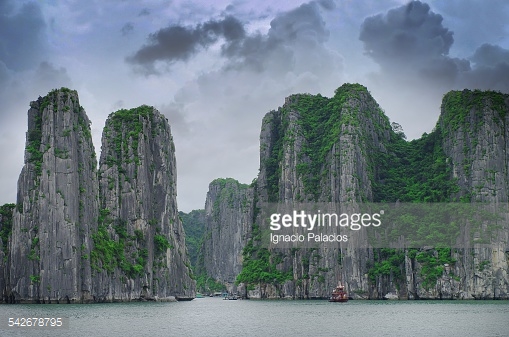 I spotted, high above me, a black kite, hovering, scrutinizing the water’s surface. With a slight trim of its tail feathers, it wheeled out over the little bay, waiting. A quick flap of its wings and it made up for lost height. Again it circled, and glided, waiting and looking. In an instant, it plummeted down to the water, grasped its prey with its talons, and soared upwards again. And there rose unbidden in my mind the lines by Tennyson:

He clasps the crag with crooked hands;
Close to the sun in lonely lands,
Ring’d with the azure world, he stands.

The wrinkled sea beneath him crawls;
He watches from his mountain walls,
And like a thunderbolt he falls.