Anyone who has been in Thailand for more than half an hour begins to notice that every building, residential, commercial, governmental, whatever it happens to be, has one or more doll-like houses standing outside it in some corner of the property. To be very visible to one and all, they are set either on a tall pillar or on four somewhat smaller stilts. These, for instance, are the two which grace a corner of the parking lot at our apartment block. 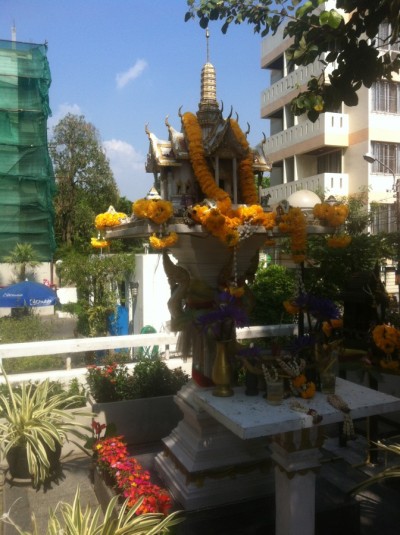 And if, finally rendered curious by constantly coming across them, one decides to have a closer look, you will find that they hold little figurines – old people, dancers, horses, elephants, cars, sometimes a Buddha. This, for instance, is a catalogue of what the bigger of our apartment block’s two little houses contains. 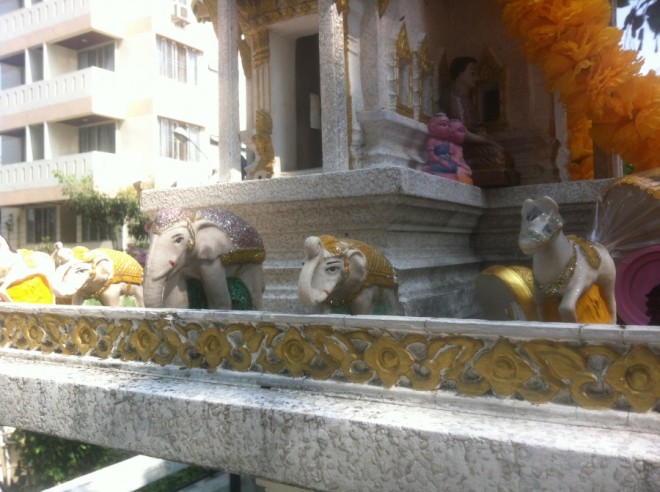 many of them will have flower garlands draped over them 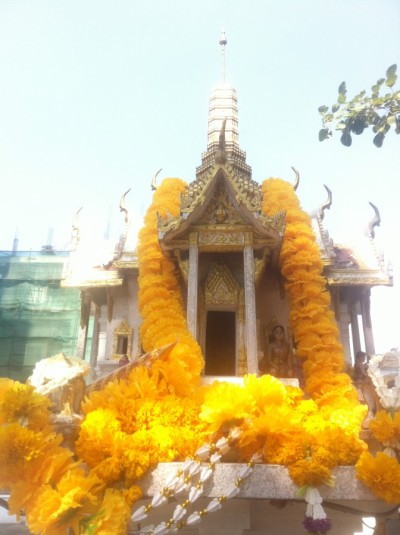 and – at night – candles are set out or strings of lights turned on to light them up.

Quite charming. In fact, when my wife and I came to Bangkok for the first time some seven years ago, we were quite taken by these little houses and considered buying a DIY kit of one, to put up on the landing in front of the door of our then-apartment in Vienna, to house a small ivory Buddha which I had bought a few years before in Sri Lanka. But it was really too bulky, so we abandoned the idea.

But actually, why are these little houses there in the first place? I should have asked myself that the first time I saw them, before seriously considering putting one in front of my door.

A little bit of reading has informed me these houses are put up to propitiate the spirits of the land. This is a core belief of animism, that spirits reside in all the material manifestations of this world – the land, its streams, rivers, lakes, waterfalls, its trees and other plants, all animals, everything really, even man-made objects like bridges. Animism has deep, deep roots in Thailand – actually, in the whole of South-East Asia, from Myanmar down to Indonesia and across to the Philippines; the tradition of spirit houses, for instance, is found throughout the region apart possibly from the Philippines. The arrival of more rational, complex, sophisticated religions like Hinduism, Buddhism, Islam, or Christianity (or ethical systems like Confucianism in Vietnam), did not make the earlier animistic beliefs disappear, although I’m sure the leaders of these new religions tried hard to stamp them out (and at least in Thailand are still trying to, according to what I’ve read) or to absorb them (which is certainly what Buddhism has tried to do).

The sad thing is that these spirits are not nice beings. The purpose of those cute little houses is actually to make sure that the spirits of the land don’t get mad at you because you’re using their land and decide to burn down your house or give you a heart attack or bring Lord knows what other calamity down on your head. So in the house you’ll put figurines of servants to tend to the local land spirit’s every whim,  you’ll put figurines of dancing girls (geishas might be a better descriptor) to keep him happy, you’ll put horses and elephants (and cars for the more sophisticated urbanized spirits) to make sure he can go for a ride whenever he gets bored of sitting at home and watching the dancing girls gyrate, you’ll give him food and drink to make sure he doesn’t go hungry … Reading all this, it occurs to me that these spirits are really just like the mafia in Sicily: if you don’t pay this man the requested pizzo, or protection money 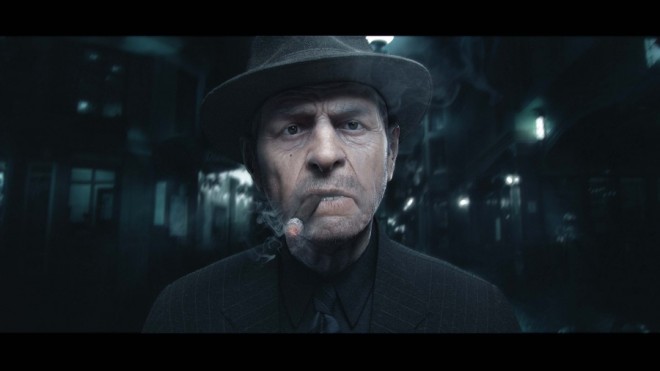 then unfortunately this will happen to your shop.

So, these pretty little houses are actually the reflection of a deep existential fear, that all around you are naughty, nasty little spirits who will hurt you if you’re not nice to them. These reflections moved me to dip into “The Golden Bough: A Study in Magic and Religion” by the Scotsman James George Frazer.

The book, first published in 1890 and republished several times thereafter, attempts to define the shared elements of religious beliefs, discussing fertility rites, human sacrifice, the “dying god”, the “scapegoat”, and many other symbols and practices. Its thesis is that old religions were fertility cults that revolved around the worship and periodic sacrifice of a sacred king (among other places, his ideas take a central role in T.S. Elliot’s poem, “The Wasteland”, which I have had cause to mention 100 posts ago and which was the reason why I originally read “The Golden Bough”). I’m sure modern anthropologists would dispute Frazer’s basic thesis, but in writing the book Frazer collected accounts from around the world of magical, animistic beliefs, which are fascinating in themselves. Here are three excerpts which he cites from other sources on the belief in spirits in South-East Asia.

“Thus the life of the Thay seems regulated down to its smallest details by custom founded on his belief in the spirits. Spirits perpetually watch him, ready to punish for his negligences, and he is afraid. Fear is for him not only the beginning of wisdom, it is the whole of his wisdom. Love has only a very moderate place in it. Even the respect in which he holds his dead, and the honours which he pays them on various occasions, seem to be dominated by a superstitious fear. It seems that the sacrifices which he offers to them aim rather at averting from himself the evils which he dreads than at honouring worthily the memory of his deceased kinsfolk and at paying them the tribute of his affection and gratitude.”

“Independently of the demons who are in hell, the Siamese recognize another sort of devils diffused in the air: they call them phi; they are, they say, the demons who do harm to men and who appear sometimes in horrible shapes. They put down to these malign spirits all the calamities which happen in this world. If the mother has lost a child, it is the phi who has done the ill turn; if a sick man is given over, it is a phi that is at the bottom of it. To appease him, they invoke him and make him offerings which they hang in desert places.”

“The desire to propitiate the good spirits and exorcise the bad ones is the prevailing influence upon the life of the Laotians. With phis to the right of him, to the left of him, in front of him, behind him, all round him, his mind is haunted with a perpetual desire to make terms with them, and to ensure the assistance of the great Buddha, so that he may preserve both body and soul from the hands of the spirit.”

The first two excerpts, written in 1907 and 1831 respectively, come from books written by French missionaries, the third from a book written by an Englishman in 1884. The first two no doubt had religious axes to grind, wishing to show how the Thai (Siamese being the old name for the Thai) were poor, benighted folk in need of Christian redemption. But even accounting for a certain amount of exaggeration, the picture which these excerpts paint is bleak indeed: a constant, haunting fear at every step.

Of course, before we shake our heads and smile and take another sip of our coffee, we should remind ourselves (as Frazer reminds us in his book) that Europe, just to take my part of the world, was also the home of naughty, nasty little spirits. Anyone like me who had to suffer through Latin and Greek in their education will remember the Roman and Greek nymphs who haunted the sacred groves and streams, and who had to be propitiated. And what about all those leprechauns, and trolls, and sprites, and ogres, who populate children’s books and popular stories? Remember Rumplestiltskin, that nasty little imp who saves the miller’s daughter from the wrath of the king by spinning straw into gold for her, but on condition that she give him her first-born child?

Or that “shrewd and knavish sprite” Puck in Shakespeare’s “A Midsummer Night’s Dream”, who at the behest of his master Oberon, King of the fairies, wreaks mayhem in the Athenian woods?

Or the ogre in Jack and the Beanstalk, who on sensing that little Jack is hiding in his house, intones

“Fee-fi-fo-fum!
I smell the blood of an Englishman,
Be he alive, or be he dead,
I’ll grind his bones to make my bread.” 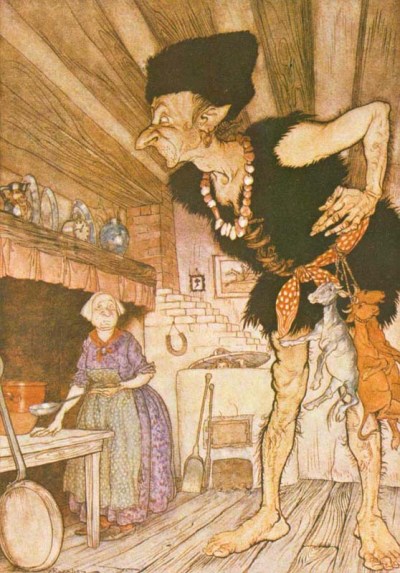 Even Tinkerbell in Disney’s sucrose version of “Peter Pan” is not a particularly nice person.

I suppose Christianity managed to reduce the strength of animistic beliefs in Europe – I won’t say stamp out, because otherwise we wouldn’t have the children’s stories – but only to replace them by another existential fear, that of suffering in hell for ever and ever.

Luckily, science has come to the rescue and driven out all the religious claptrap. There is no supernatural world, it tells us, only the natural world around us. And with that, all those spirits disappear in a flash.

But now that I know all this, would I still buy a spirit house kit to assemble on the landing in front of my apartment door in Europe? Do I want to be seen, if only to myself, to believe in naughty, nasty spirits? After giving some thought to the matter, I have concluded that yes, I would, but for a very different reason. One of the houses whose photo I give at the beginning of the post is the house of the ancestral spirits of the place, the spirits – or ghosts I suppose – of the people who lived there before you. In fact this house contains figurines of old people. 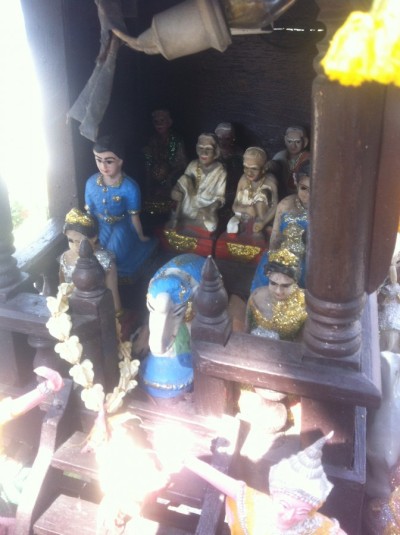 Unfortunately, these spirits also require propitiation in Thailand, since they too can turn nasty (jeez louise, what a world view!). But I would use the house differently. I would use it to house the memory of my parents and my wife’s parents. For my parents, I would have a very tall figurine stand in for my father and a very small figurine for my mother, for that indeed is how they were; one of my abiding memories of them is the two dancing together, he very tall, she very small, slowly circling the dance floor. For my wife’s parents, I would have a large figurine stand in for my mother-in-law, for she was indeed of a stout disposition. For my father-in-law, I’m not sure, I hardly knew him. I’ve mentioned before his fondness for wearing a Basque beret, so perhaps a figurine of a man with such a beret would do? But I would leave this for my wife to decide. And I would move the house into the apartment, so that their memory could be with us, rather than left out in the dark like the dog. I feel that this would be a better way of remembering them, of keeping their memory alive, than going on infrequent visits to the graveyard, and a useful complement to looking at old photos and reminiscing. And I would hope that one day my children would also have a spirit house to which they could add little figurines of us once that day arrives. As it surely will.