My wife and I have just come back from a trip to Vienna. I had to be there for work, but luckily we also got to stay over a weekend. This allowed us to taste once more the artistic delights of the city. Wonderful, truly wonderful … Enough to give one heart palpitations.

We had first tasted the artistic glories of the city back in March of 1985 (I am certain of the date, because I was in Vienna to witness the signing of the Vienna Convention for the Protection of the Ozone Layer). That time too we had had a weekend to ourselves, which we used to first visit the Kunsthistorisches Museum, Austria’s national Museum of Fine Arts. I have to tell you, we were gobsmacked – that’s the only word – as we walked from room to room and saw one marvel after another hanging on the walls. It was one of those cases of “Really? They have this painting here? Wow …” I just can’t stop myself from showing you some of my favourites; there are many, many more, for all tastes.

Lotto’s “Portrait of a Young Man with a Lamp”

Canaletto’s “Vienna, seen from the Belvedere”

A whole slew of Titians, most of which are of disagreeably sucrose blondes, but which also include this powerful portrait of Johann Frederich, Elector of Saxony

Caravaggio’s “Madonna of the Rosary” 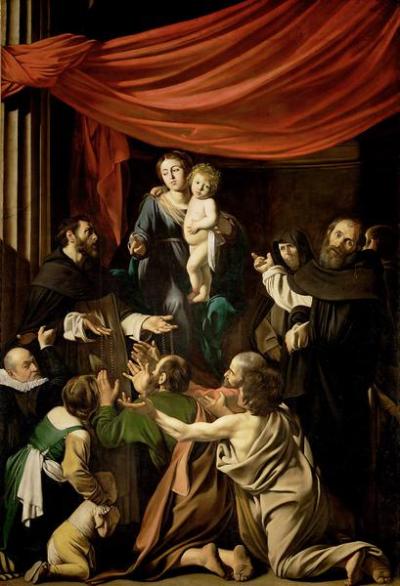 A wondrous collection of Peter Bruegel the Elder, of which I throw in only his “Hunters in the Snow (Winter)”

and his “Peasant Wedding” 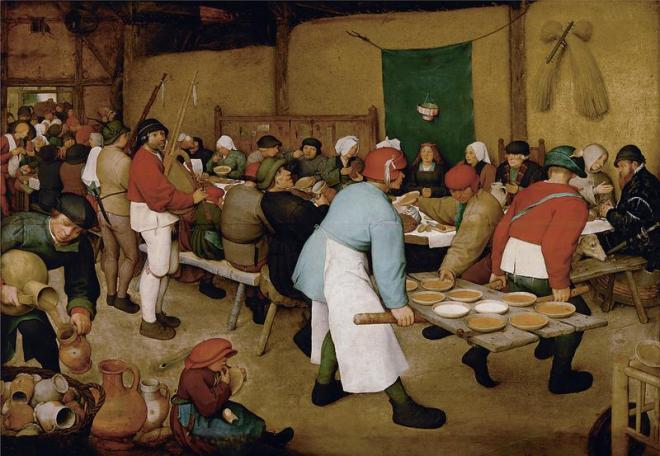 A magisterial self-portrait by Rembrandt 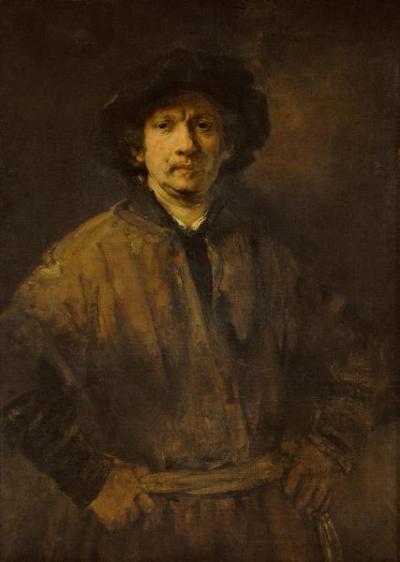 Vermeer’s “The Art of Painting”

as well his “Portrait of a Venetian Lady” 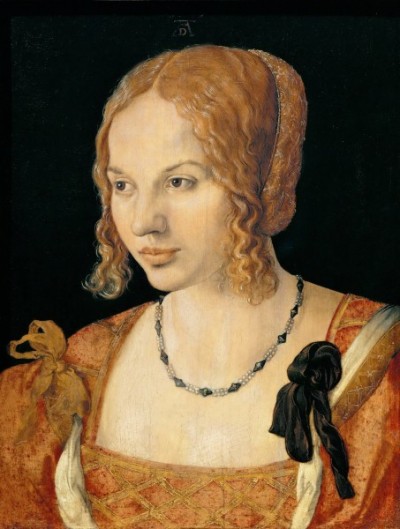 I stop, otherwise I will bore my readers. But, without wanting to sound too much like an advert for Vienna, I would really urge any of them who are lovers of art but have somehow never made it to Vienna to hurry on over, if only to visit the Kunsthistorisches Museum. As the Michelin Guides would say, it alone “is worth the trip”.

But Vienna has much, much more. That same weekend back in 1985 we discovered Egon Schiele. We saw an exhibition of his paintings somewhere in the Grinzing area of Vienna, and I was just blown away. This particular painting of his, “The Embrace”, has remained imprinted in my memory ever since.

The most extensive collection in the world of Egon Schiele’s work is in the Leopold Museum, part of Vienna’s Museums Quartier, MQ. MQ opened when we were living in Vienna, some 20 years after our first visit. Along with the Leopold Museum, MQ houses MUMOK, the Museum Moderner Kunst Stiftung Ludwig Wien. Personally, I always preferred the Leopold Museum; MUMOK was a little too aggressively modern for my tastes. So I suppose it comes as no surprise to hear that after visiting the Kunsthistorisches Museum last week we visited the Leopold. The Egon Schieles are wonderful. This one painting of his, “Seated Male Nude”, can stand in for the whole collection.

You cannot go to the Leopold just for the Schieles, wonderful as they are. You must visit the whole collection. This is where I discovered a host of Austrian artists from the late 1800s up to World War II: Gustav Klimt of course, but also Richard Gerstl, Koloman Moser, Oskar Kokoschka, Albin Egger-Lienz, Anton Kolig, and many others. The Leopold holds the painting of Gustav Klimt which I adopted as my gravatar for this blog. Those who are interested to see it can visit my Home Page. Here, I will insert another of his paintings in the museum’s collection, a beautiful painting of early morning on Lake Attersee

and I add to this, as a stand-in for all the others, a painting by Richard Gerstl, “Semi-Nude Self-Portrait” with its hypnotic eyes. 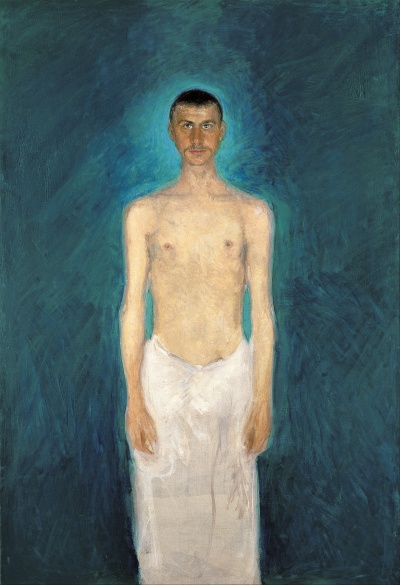 It’s not finished! Vienna also has the Belvedere Museum. We wanted to visit it too last week – they were holding an Exhibition on “The Women of Klimt, Schiele and Kokoschka”, which included Schiele’s “Embrace” – but we ran out of time. The Belvedere has a collection which stretches all the way from the Middle Ages to the present day. It competes strongly with the Ludwig Museum, having an excellent collection of paintings from the late 19th Century to the Second World War (the Klimts and Schieles are not to be missed), but it also has interesting paintings from the Baroque to the Biedermeier period. I will not show any of these, however. Instead, I will throw in a picture of a piece from its Medieval collection, a statue of St. Leonhard, from South Tyrol.

I chose this picture because the Belvedere has some beautiful pieces of that most Germanic of art forms, religious sculpture made of wood, originally painted in bright polychrome. The picture also gives me an excuse to cycle back to the Kunsthistorisches Museum. Because that museum is more, much more, than a gallery of paintings! There’s the collection of arms and armour, which one has to visit simply to gawp at the brilliant metalworking skills of past armourers. There’s the collection of historical musical instruments, which my mother-in-law, a lover of music, frothed at the mouth about. And then there’s the collection of sculpture and decorative arts, a disparate collection of artifacts, ranging from the seriously bling to the exquisite. Probably the most well-known piece in this collection is Benvenuto Cellini’s salt cellar, currently famous because it was recently stolen dramatically, only to dramatically reappear, unharmed, a few years later.

I prefer, though, this “Vanitas”, made, like St. Leonhard above, of wood and beautifully polychromed.

It reminds us that while we may be beautiful now, and well-toned, one day we will be old and sag in all directions (in my case, I’m already at that point, so I suppose the piece reminds me regretfully of what I once was).

I like these two ivory pieces even more. The first shows Gregory the Great feverishly scribbling away (he was a very prolific writer, this Pope), with scribes below him feverishly joining in. 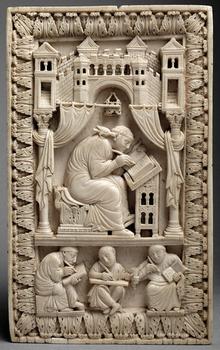 The second shows the Ascension of Jesus, with the disciples weeping bitterly below. But rather than having Jesus levitate, which is the way this scene is normally depicted, Jesus is being swept up by God (note His hand), rather like a gymnast being elegantly swept up by a trapeze artist. 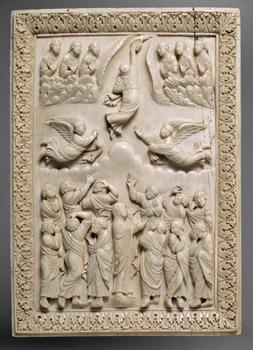 If readers were to think that it finishes there, they would be wrong! The Kunsthistorisches also runs the Imperial Treasury, another smorgasbord of golden baubles smothered in precious stones. Because of my fondness of cabochon stones, I only show here the Crown of the Holy Roman Emperor, of the 10th-11th Centuries

and St. Stephan’s  Purse, actually a reliquary, from the 9th Century.

Along with various other items, these were taken in the early 1800s from Aachen, Charlemagne’s original Imperial capital, to keep them from falling into the hands of the revolutionary French, and somehow they never made it back.

I suspect that my readers’ attention might be beginning to drift, so I quickly throw in two other wonders to be found in Vienna. One, located in the Museum für Völkerkunde or the Museum of Ethnology, is the so-called headdress of Montezuma, an exquisite piece from Mexico made of the feathers of quetzals and other birds mounted in a base of gold studded with precious stones. 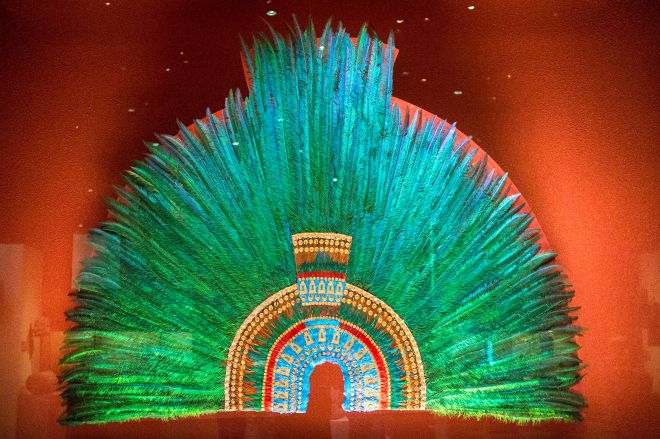 As we once heard from Austria’s Ambassador to Mexico (whose apartment we were renting at the time), the piece is a source of continuing friction between the two countries, Mexico claiming that it was somehow stolen and Austria claiming that it was legitimately purchased (by the Archduke Ferdinand of Austria in at least 1575 and maybe before, i.e., no more than 90 years after Columbus discovered America – how did our good Archduke lay his hands on it?).

The second piece is actually to be found a little outside Vienna, in the imperial abbey of Klosteneuburg. It is the 12th Century Verdun altar, so called because it was made by Nicholas of Verdun, one of the most famous goldsmiths and enamelists of the Middle Ages.

The altar consists of 45 beautifully enameled panels, telling the biblical story. This one, for instance, relates the kiss of Judas (a theme I have mentioned in a previous post, in this case in a painting by Caravaggio).

If any of my readers have finished visiting the altar and still feel ready for more, they can always consider visiting the Samlung Essl, a museum of (very) modern art in Klosteneuburg, which, like the MQ, opened while we were living in Vienna. On the other hand, if like me they find this museum’s art too aggressively modern, or if they are simply too tired, they can just head back into town and with a bit of luck they will sight a most interesting piece of art, the municipal incinerator of Spittelau, decorated by the Austrian artist Hundertwasser. 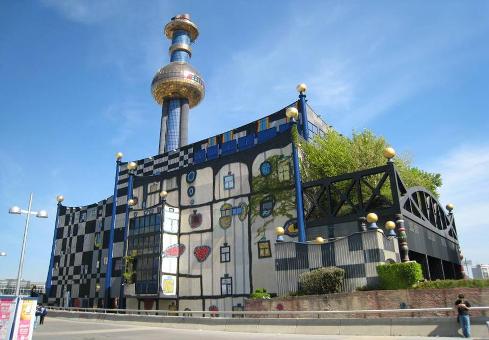 I’ve seen many municipal incinerators in my time, and I must say this is definitely one of the prettiest; it certainly helped to gain its acceptance by the local population.

There’s more, much more art to visit in Vienna, but I’ll leave it at that. Like I’ve already said, I don’t want to sound like an advert for Vienna, but really it’s a wonderful destination for lovers of art.

And don’t get me started on the music …