I was in Vienna a few weeks ago – it is always good to show your face from time to time in Headquarters to remind your colleagues that you still exist – and my wife accompanied me because we had decided to go on vacation at the same time. Since we had a free morning, we decided to visit the Leopold Museum.

The museum is part of a very nice urban recovery scheme which the Austrian government undertook some ten-fifteen years ago. There being no imperial horses to house anymore, the old imperial stables had fallen on hard times. So the city decided to turn the stables into a Museums Quarter, made a deal to purchase the art collection of a certain Rudolf Leopold, and built two art museums on the premises, one for his modern art

and one for his contemporary art

(is there a deeper meaning to the colour scheme of the museums’ cladding?)

For those readers who plan to visit Vienna, the Quarter is just across the road from the Kunsthistorisches Museum, the country’s premier museum of fine arts, which houses the old imperial collection. This is a truly fantastic collection, which alone is worth a visit to Austria. One of my favourites there is Caravaggio’s “Madonna of the Rosary”. 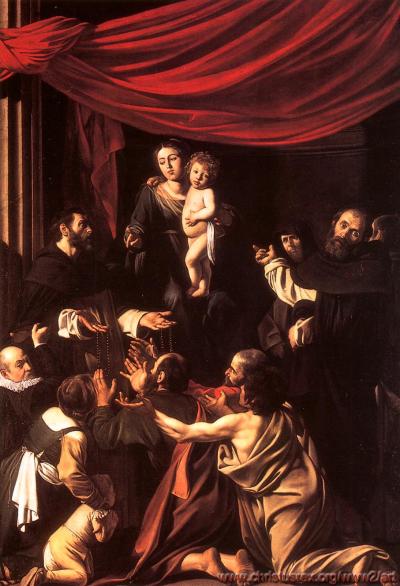 As for the Leopold Museum, it has a great collection of early 20th Century Austrian, German and Central European art. I particularly like its collection of Egon Schieles. The very first time my wife and I went to Vienna, back in the early 80s, we stumbled on Mr. Leopold’s collection, hung at that time in a cramped house somewhere in the outskirts of Vienna. His Schieles knocked my socks off as they say. I particularly remember this one.

With the art from these fantastic collections almost spilling out onto the pavements of Vienna (and I haven’t even mentioned the Belvedere or the Albertina or the smaller collections), it’s not surprising that it is here that I started my own – very, very modest – art collection. The spark that lit the fuse was the Dorotheum. 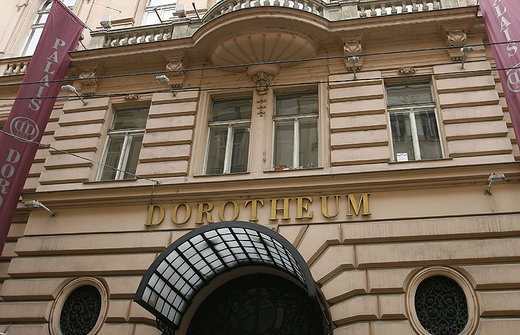 Wonderful, wonderful place, the Dorotheum. It’s an auction house, but the marvelous thing about it is that it has two whole floors where the price is fixed and you can buy the articles on the spot. Which is great, because auctions make me nervous; I only went to one auction at the Dorotheum – where Mr. Leopold was present, by the way – and the speed with which the prices levitated (on a particularly nice painting by a Hungarian artist) gave me palpitations. These two floors have more the feel of a jumble sale, full of horrible stuff, but where you feel – you know – that the piece of your dreams is just behind that dreadful cabinet in the corner. And in the spirit of a jumble sale the prices in these parts of the Dorotheum are – relatively speaking – affordable.

My first piece of art was hanging in a corner, in the dead end of a section dedicated to carpets. 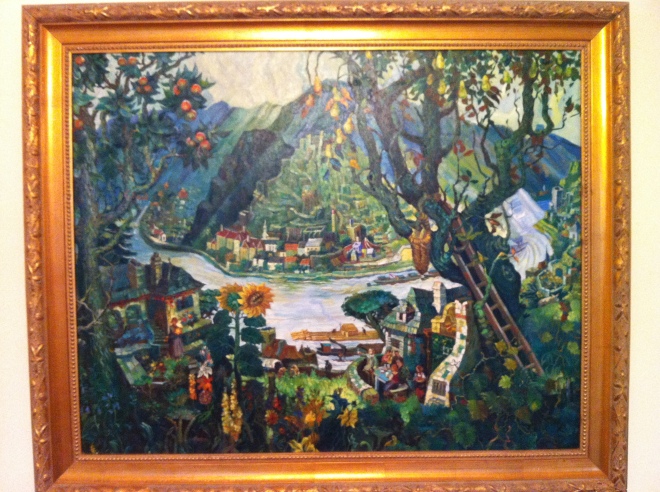 When I first spied it behind the carpets, it was woebegone, sagging in the middle, dust covering its frame. But it cried out to me: “Take me! Take me!” That riot of flowers and fruit against that cubist-type background of mountains! That river, with the small town on its bank! The happy people! It had to be mine!! But the price made me hesitate – it was 400 euros or thereabouts. And it would need fixing and cleaning. I dithered and dathered, I went back a few times, I was like one tormented. Eventually, my wife took over and gently pushed me towards the purchase.

They say that the first murder is the most difficult; after that, it gets easier and easier. I think it’s the same with the purchase of art. In relatively short order after that, I purchased, always at the Dorotheum, this gouache, a naïf view of the Seine in early 19th century Paris:

This aquarelle, an 18th Century view of Kashmir:

This oil painting, of a tramp ship ploughing its way through the waves: 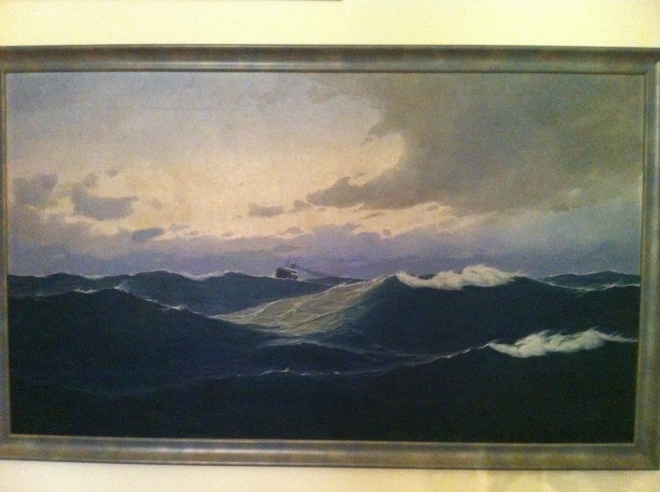 (I bought it because it reminded me powerfully of the poem “Cargoes” by John Masefield, whose last verse is:
“Dirty British coaster with a salt-caked smoke stack,
Butting through the Channel in the mad March days,
With a cargo of Tyne coal,
Road-rails, pig-lead,
Firewood, iron-ware, and cheap tin trays”)

This aquarelle, by the same artist, of fishing boats off the coast of Britain:

This print, of a barn half buried in the snows of Upper Austria:

It was just as well that we left for China. My wife was becoming anxious about how the art was slowly invading the walls of our apartment; she has always preferred bare white walls and generally uncluttered internal vistas. I could not bear to have these sitting in the dark of a warehouse in Vienna waiting for us to come back. We took them all down to Milan, where they hang in our apartment. I took the photos above a few weeks ago, when we passed through.

The wonderful thing about these pieces is that they have allowed me to also unfurl my passion for history, giving me an excuse to dig around into their past. For instance, the Dorotheum claimed that the first painting was a view of Dürnstein, north of Vienna on the Danube (and in whose Castle Richard I was kept prisoner for a while). But after revisiting the place, I am convinced that this is not so; the banks of the river are not that steep on both sides. The picture framer who cleaned and fixed the painting was also not convinced of the appellation. He thought it was the upper Moselle River; a visit there is on my to-do list. As for the gouache, it was sold to me by the Dorotheum as an urban landscape in northern Belgium. Not so! For reasons which I won’t go into here but have to do with research I did on that shop on the right hand side of the painting, I am convinced that it is a view of the Seine River in Paris, looking upstream from Pont Notre-Dame, one of the bridges linking the Île de la Cité with the Right Bank. For its part, the view of Kashmir was, according to the Dorotheum, a view from western China (which is why I bought it; I already knew then that I would be going to China). Research on my part quickly showed me that actually it is a well-known view of a rope bridge near Srinagar. Really, the Dorotheum is doing some very sloppy work here – but it’s more fun for me.

With the Dorotheum no longer just a few subway stops away, the collecting passion has slowed – the apartments are smaller too. We have bought a piece or two, which when we take them back will remind us of our stay in China, rather like those old English colonels who came back from the Empire with bits and bobs of native paraphernalia, which they would proudly display in their retirement home at Bournemouth.