One of the funnier scenes for me in the film About a Boy is when the Boy kills a duck after he throws a loaf of bread, which his mother had baked, into the pond. Lord knows what ingredients she had used, but it had the density of a rock and thus the predictable effect when it hit the duck.

I laughed loud and long, partly because it reminded me of when I was a boy. During my visits to my grandmother in London, one of her staple ideas for keeping me busy was to take me down to one of the ponds in Central London’s many parks to feed the ducks. She did this with most of her grandchildren who passed through London and kept a stash of stale bread for the purpose. And boy was it stale sometimes! If I’d been a duck I wouldn’t have touched it with the end of my webbed foot.

As I said, she took me to several parks in Central London. Hyde Park was a favourite with its Serpentine lake. Another was the lake in St. James’s Park. The nice thing about that lake was that it played host to many different types of ducks, some of them really beautiful. One of the most lovely was the mandarin duck:

(I knew its name because the park authorities had thoughtfully placed plaques by the lake’s edge, right where little boys and girls threw stale bread to the ducks, which carried a picture of each type of duck along with its name).

I swore to myself that when I owned a duck pond, I would stock it with mandarin ducks. Well, I don’t own a duck pond – yet (hope springs eternal). But I do live by a pond-like body of water here in Beijing. So you can imagine my excitement when on Saturday I noticed a pair of mandarin ducks paddling peacefully along its surface.

Will they be there tomorrow, when I walk to work? Or will they have flown off to greener pastures? I really hope they’ll be there. Feeding them will be a great way to get rid of our stale bread.

They stayed! Here’s a photo of the male I took the other day, a month or so after writing this post. It’s not a great photo – actually, it’s a lousy photo – but the duck was careful in not coming too close (no doubt it sensed that it could quickly end up in a pot in a Chinese kitchen), but it is evidence of their continued presence. 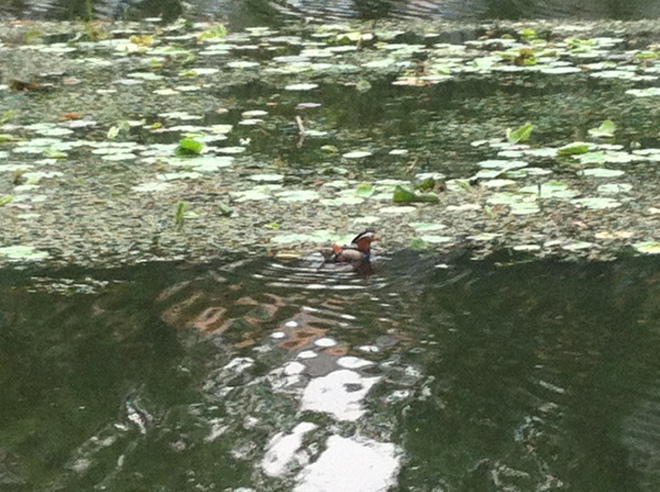 “About a Boy” dead duck: http://media.tumblr.com/tumblr_lpks23apyX1qiurmy.png