The last week has been dreadful for air quality in Beijing. The brief break we had which I wrote about a few posts ago was but a temporary remission and we soon plunged back into the murk. My wife was a little more philosophical about it than I. She remarked that it reminded her of her childhood in Milan, when smog was frequent, and reminisced about having to cross the road to go to primary school and not being able to see if the light had changed. But still, we both suffered.

To cheer us up, my wife bought a bunch of tulips. They were still closed when she brought them home, but she placed them in a jar and we watched them slowly open over the following few days. Yesterday morning, we woke up to a gloriously bright and clear day. Thanking all the spirits I could think of, I stepped humming into the dining room, only to be greeted by the tulips which had fully opened over night. The sunlight pouring in through the windows was picking out their delicate pinks, whites and greens. I just had to memorialize the occasion.

The mandarins which were also on the table kept nudging themselves into the frame, so eventually, I brought them in too. 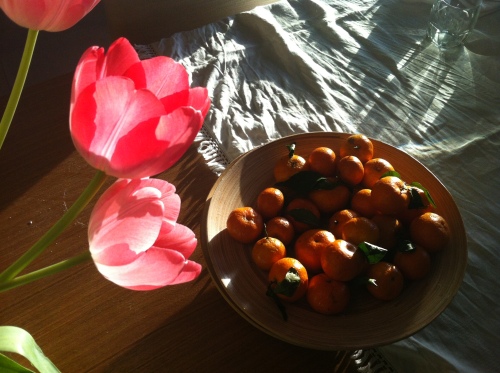 Wonderful, wonderful fruit, those! They don’t look up to much, but aah the taste, my friends! First comes the delicate mandarin aroma which breaks out as you begin to peel the fruit and prepares you for what lies ahead. Then comes the citrically acidic taste with sharp mandarin overtones which hits your taste buds as you pop one segment in after the other. They are completely addictive; between my wife and I, that plate of mandarins lasted but one breakfast. She has found a greengrocers up the road which sells them. Sorry, the address will remain a secret.